“Hugh, Gladys and Anna Cleage of Scotten took their share of places in the annual city ice skating meet which was held at Belle Isle last Sunday afternoon.  Anna won first place and a gold medal in the Senior girls’ novice; Gladys, third in the same event and  a gold medal.  Hugh competed in the men’s 220 and two-mile events.”

This article is from one of the Detroit daily papers and is undated, but I would place it in the early 1940s.  Years later when I was talking about this photo with my aunt Anna, she said that the story was wrong and that actually she came in third and Gladys won the race.  She remembered taking an early lead in the race but soon falling behind as Gladys easily over took her.  They learned to skate at the  Northwestern High School skating rink, which was a few blocks from their home on Scotten.  When my sister and I were in high school at Northwestern in the early 1960s we skated at the same rink.  We got racing skates because Hugh and Gladys were so cool skating on the Lagoon at Belle Isle, but we were never gold medal material.  The old Northwestern High School is no longer there.  It was torn down and a new school was build where the skating rink used to be.

In 1986 my husband and I moved to  Idlewild,  Michigan with our children.  We lived on Idlewild Lake.  When it was frozen we skated right in front of the house.  Hugh and Gladys could still skate circles around us.  During the summer when Gladys and I walked around the Lake, people from Detroit’s Old West Side would stop us to ask if she was the skating champion.  She was in her early 60s. This week I wish I had some skates.  It would make it so much easier to get around frozen Atlanta.  Above is a picture of four of my children skating on Idlewild Lake about 1990.  To see more Sepia Saturday offerings click here.

After posting yesterday about the children in this boat, I looked at different view of the same boat, same children plus dog.  I think that the baby is Hugh, not Barbara Cleage. That means it was taken about 1919.

Hugh Cleage, the baby, was the 4th son of Dr. Albert and Pearl Cleage. He was born in June 1918. Hugh took a course at Michigan State University in agriculture.  During WW2 he and his brother Henry farmed as a conscientious objectors.  After the war, Hugh worked at the post office.  In the late 1950s, Hugh and Henry started Cleage Printers where they printed far into the night putting out flyers for grocery stores, books of poetry and radical newsletters. Hugh ran on the Freedom Now ticket in 1964.  After the 1967 Detroit riot, many of the stores that they had printed flyers for went out of business. Henry went back to law. Hugh continued to run the printing plant for several years, but eventually closed it down.  He spent many years being care taker for his mother after she broke her hip and became more and more frail.  Later he helped his nephew Ernest, on his farm in South Carolina. Hugh died in South Carolina in 2005.

You can read the original post Seven In A Boat here.

Three generations of my Cleages. Front left is Henry, with Louis behind him, center is my father, Albert B. front right is Hugh. Behind Hugh is my great grandmother Celia Rice Cleage Sherman. Back left is my grandmother Pearl Reed Cleage holding baby Barbara Cleage Martin. This photograph was taken about 1921 somewhere around Detroit, Michigan, perhaps on Belle Isle.  My grandfather took the photo. There is another from the same day with him in the photo taken by my grandmother.

I first shared these photographs 5 years ago. Time to bring it back.

Cousin Alberta Cleage, my grandfather’s brother Edward’s daughter, came up from Athens Tennessee to stay with her Uncle Albert and his family and graduated from Northwestern High School in 1927.

My uncle Hugh Cleage graduated in 1936, unfortunately that yearbook is missing.

My cousin Geraldine Cleage, Uncle Henry’s daughter graduated in 1940.  They lived a few blocks from my grandparent’s house on Scotten.

My sister Pearl Cleage graduated from Northwestern in 1966.

Pearl gave the valedictorian speech at her graduation. Jim advised her to speak out against the war in Vietnam. She was horrified at the thought and regrets now that she did not do it.

Photographs of Northwestern High School are from the Website for the Alumni Association – NWHSAA.

This is the second batch of photographs fulfilling missed prompts for Sepia Saturday 47 – 200. With this I have answered every prompt since I began with #47. 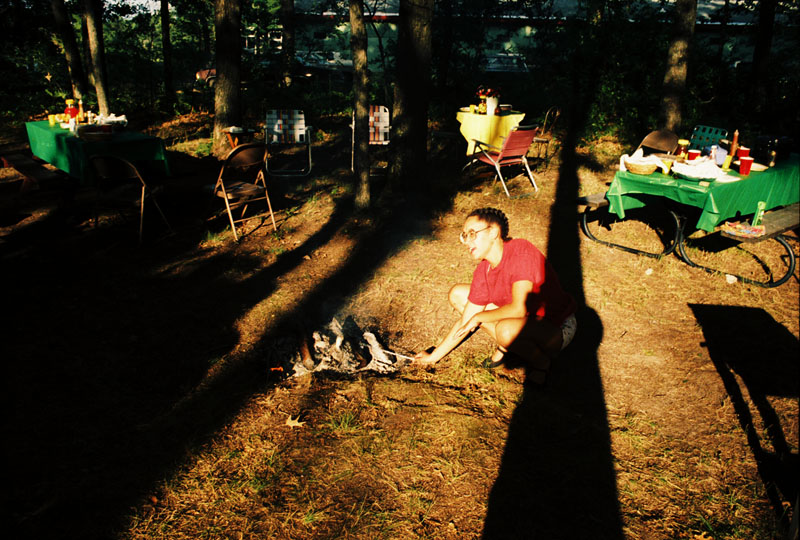 Jilo roasting a marshmellow during one of the rare Cleage Reunions in the Deer Park next to Louis’ cottage in Idlewild, Michigan. 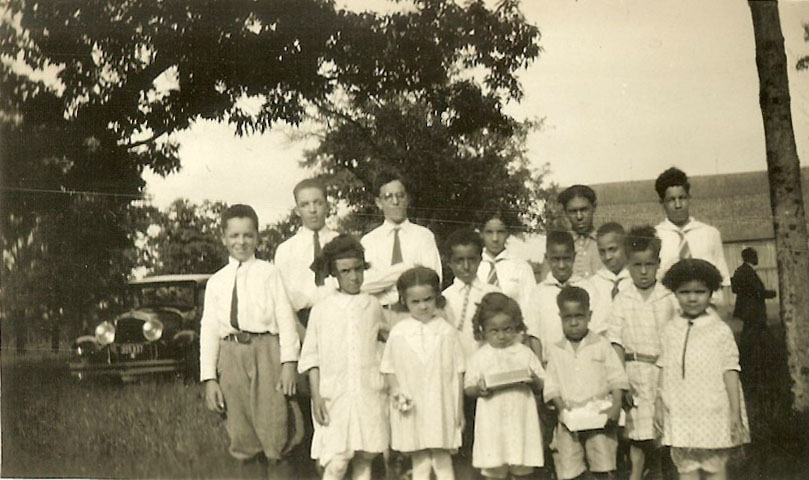 My father and his siblings with other children at The Meadows. About 1930.  In the first row, L > R Henry, Barbara, Gladys and Anna Cleage. In the second row also L >R, Albert Jr, Louis and Hugh Cleage. Unfortunately, I do not know the other children’s names. 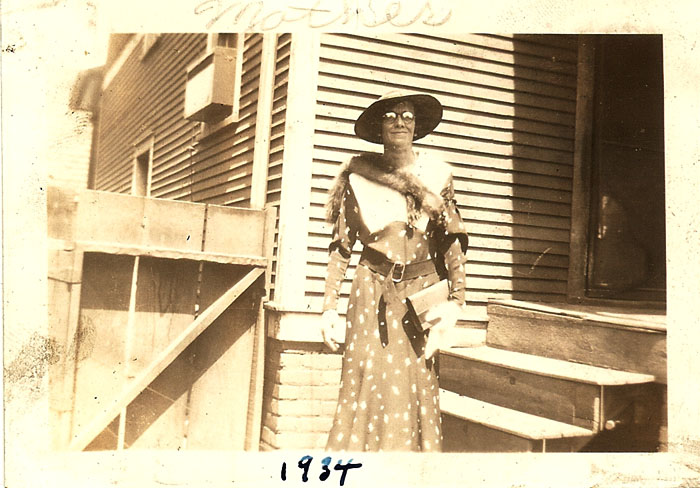 My grandmother Fannie Mae Turner Graham all dressed up for church by her back steps. I wonder what that box in the kitchen window was.  I found that there were “window refrigerators” in use during the depression.  You can see one here “LawCo vintage Window Refrigerator“.  Or even better, here “Window Icebox, A Money Saver.” Herb Mandel describes using one as a boy. 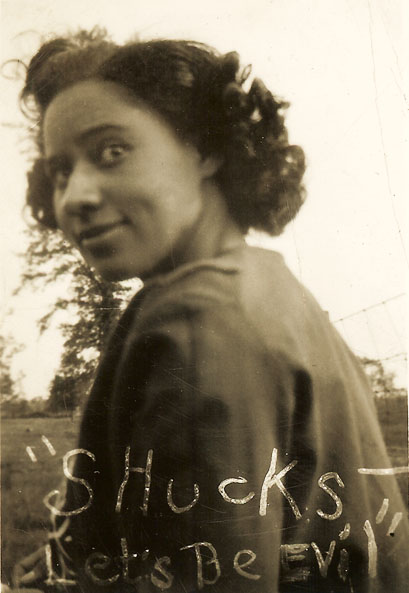 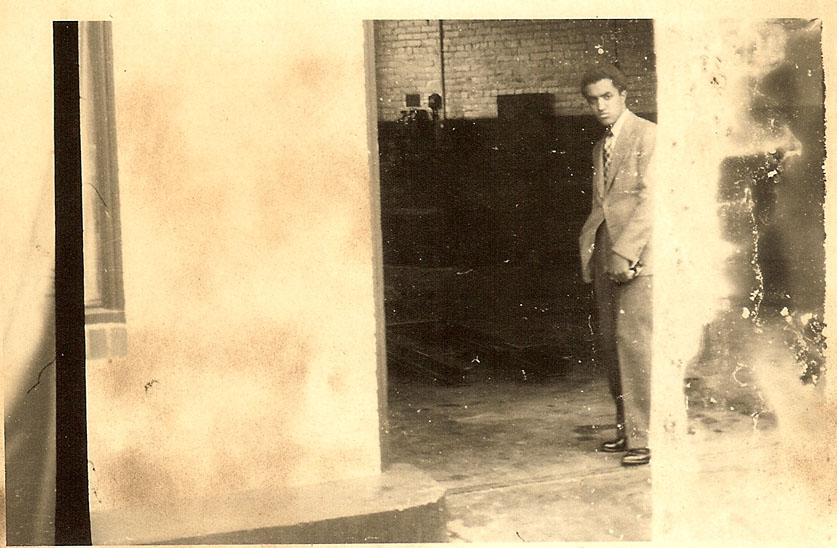 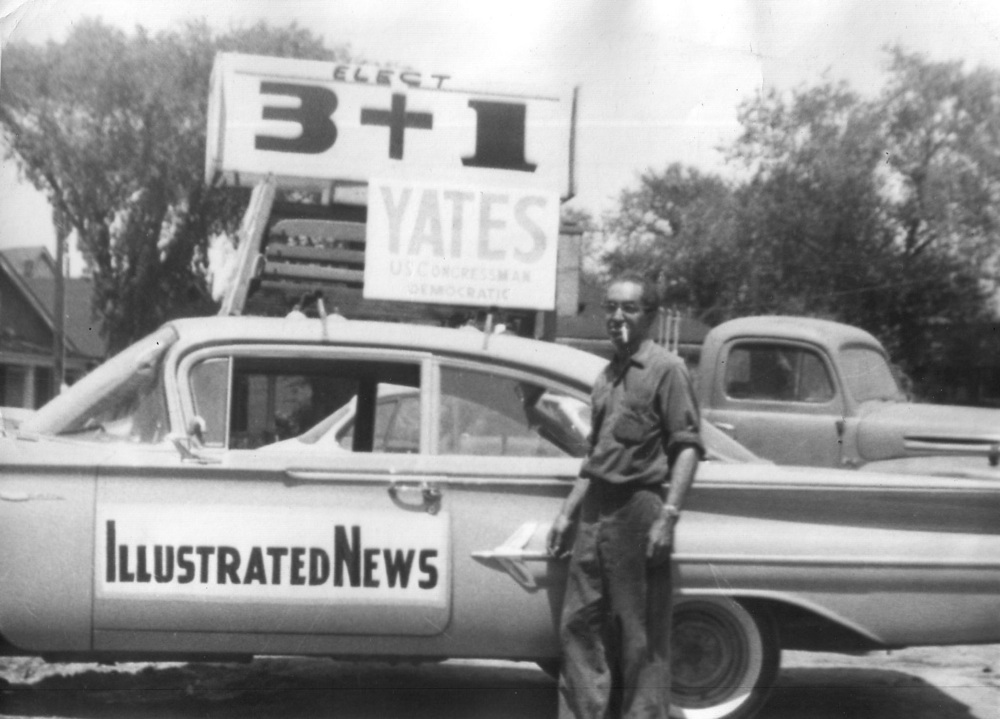 My uncle Hugh Cleage standing by the sound car he rigged up for the 1962 Congressional election in Detroit.  My Aunt Gladys, my sister and I spent hours in that car riding through our community. “Make your children proud.  Vote for Frederick Yates, a Negro in the 15th District…” One of us would ride in the car reciting as Gladys drove down the street while the other would leaflet the houses.  My sister and I were both in high school. I would turn 15 in August 1962.  My cousin Jan sometimes rode with us but she was too young to man the mic.

Below are 4 pages from 2 issues of the Illustrated News put out before the election. Click to enlarge.  Diggs was re-elected but none of our other candidates won. 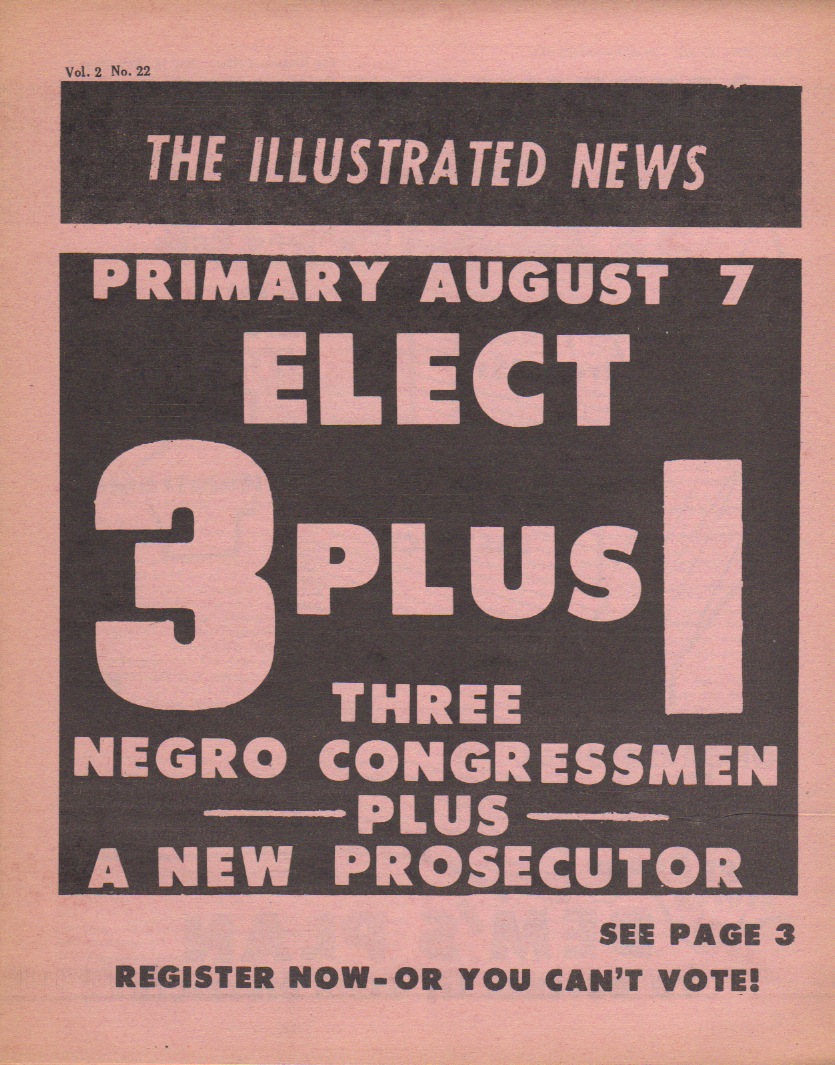 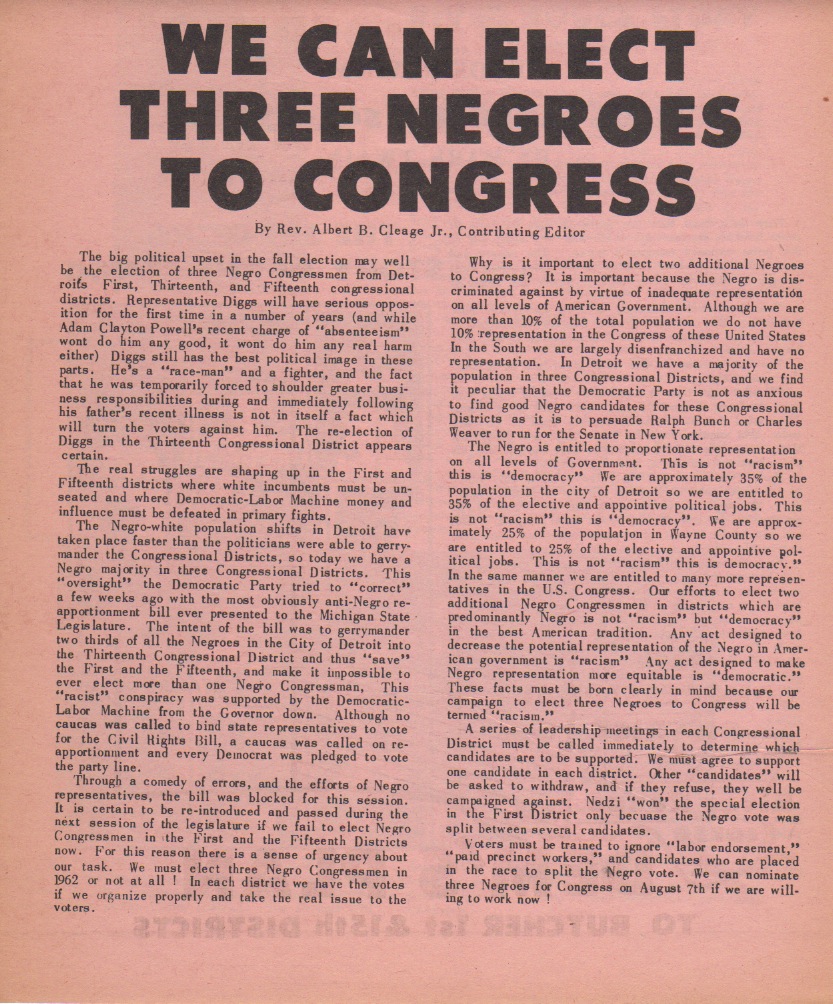 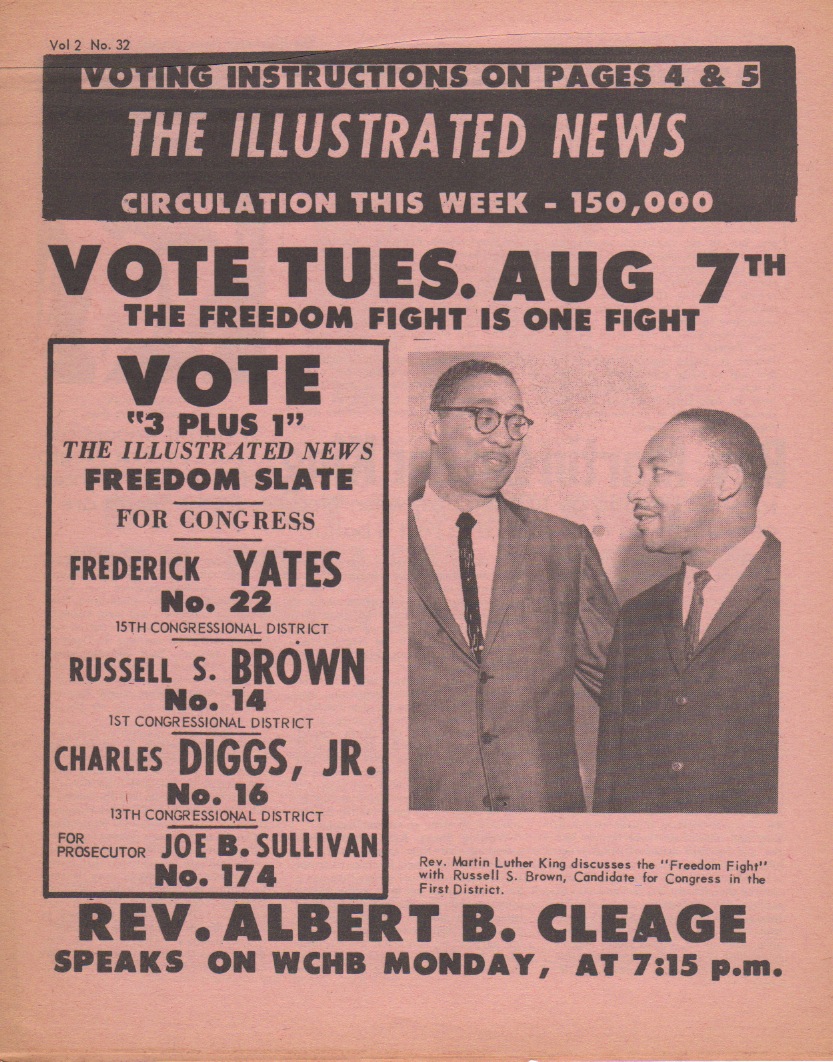 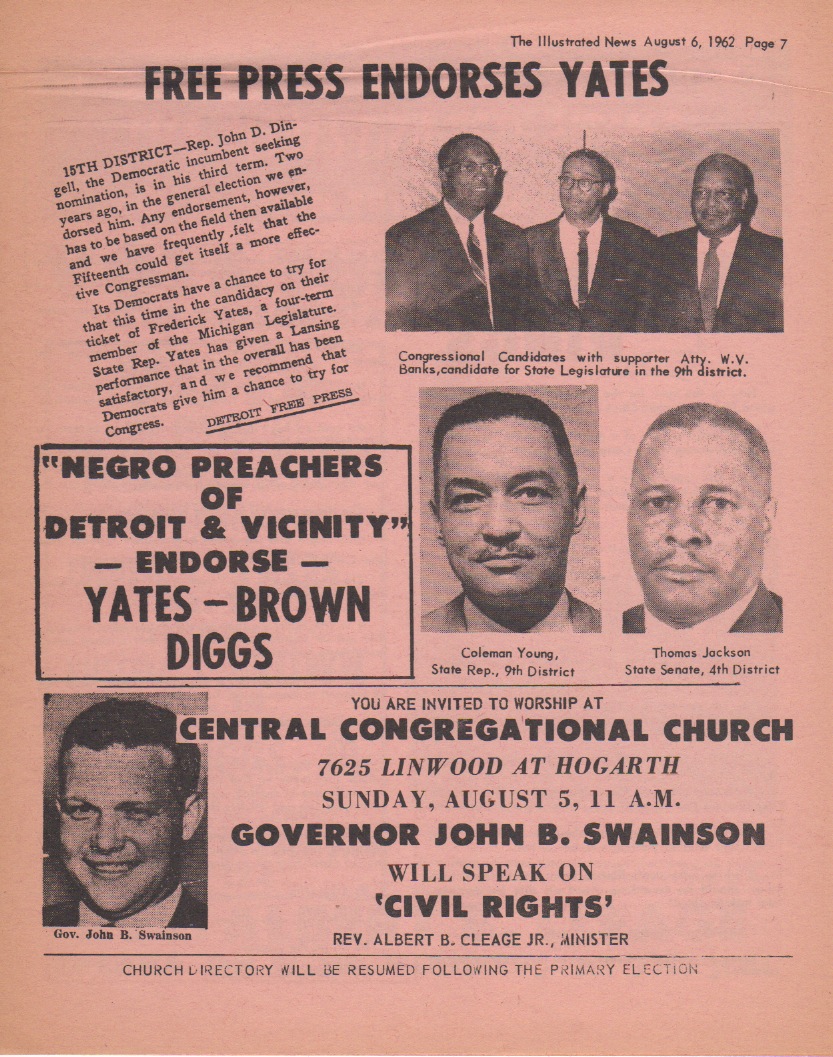 I have used some of this information before but the photographs are all first timers.

These photographs were taken at “The Meadows” near Capac, St Clair County, Michigan around 1939.

My Aunt Gladys remembers that her father Dr. Albert B. Cleage Sr  and a bunch of fellow doctors bought it. It was to be a place where everyone could get away and the kids could meet and play… big house on the property with a porch that wrapped around 2/3 of the house…  dances on the porches… near Capac Michigan… they sold it later. She kind of remembers parties on the porch… a getaway other than the Boule or Idlewild … her brothers and their friends spending a couple weeks at the meadows during the summer and brother Louis packing the provisions.

Some entries about the Meadows from Hugh’s brother Henry’s diary, several years earlier in 1936.

August 29         Meadows
Arrived at meadows at about 7:30 (getting dark) Had seen Velma before I left – I have her ring now – after had gotten our trunk in – we went down to creek – other’s brought some wood up and started a fire – I stayed down watching the creek and the farm – as it was dark they worried and came and got me.

August 30        Meadows
Sunday Richard’s club gave a picnic – we played ball off and on all day.  Daddy came out and brought Bobby – wrote two letters – Velma and Carolyn.  Bobby deliver them.

Last night when the others were in bed Morrow, George, Paul, Hugh and I sat around camp fire and sang – Nice but a little chilly  (Benard’s parents came out)

August 31       Meadows
After breakfast some of us went swimming – after that we all worked on a raft till dinner – chopped heavy logs from a fallen tree – tied together with grape vines and barrel wire – after dinner went & christened it “Frogy Bottom” & launched it – it immediately sank – logs were too heavy – were we mortified – the same group sat around the campfire again sang after dark.

Boys are playing horse shoes just after dinner – we fished and swam today – George caught a pretty large bass and I, trying to throw him across river to Morocco – threw him in.

I like to get on the hill and look down towards the creek in the evening and watch –  The other nite I was there, Morocco, George, Hugh and Benard were chopping wood.  Louis and Paul were sitting further down the hill with their arms full of wood – It was almost nite – The faint light from the west gave the scene a surreal quality – The grass uneven, the rolling land, the giant trees, the creek, all outlined in this light and the boys too reminded me of an illustration in the book “Tom Browns School Days.”

Unfortunately Warren was not reading the Saturday Evening Post in this photo, he is reading a Mad Magazine.  For several years I remember copies being around the house.  Such a crazy magazine.

By searching online I was able to find a copy of the cover of this issue.  It is dated October  1962.  The copy in the picture above looks pretty new. Everybody seems to be wearing cool weather clothes so it could well be October of 1962.  Warren and Pearl were both high school freshman in 1962.  Hugh was printer/owner of Cleage Printers.

Old Plank was the farm house on two acreas that my family owned near Wixom, Michigan.  We spent as much time as we could there and were often joined by other family members who also made the short drive from Detroit. 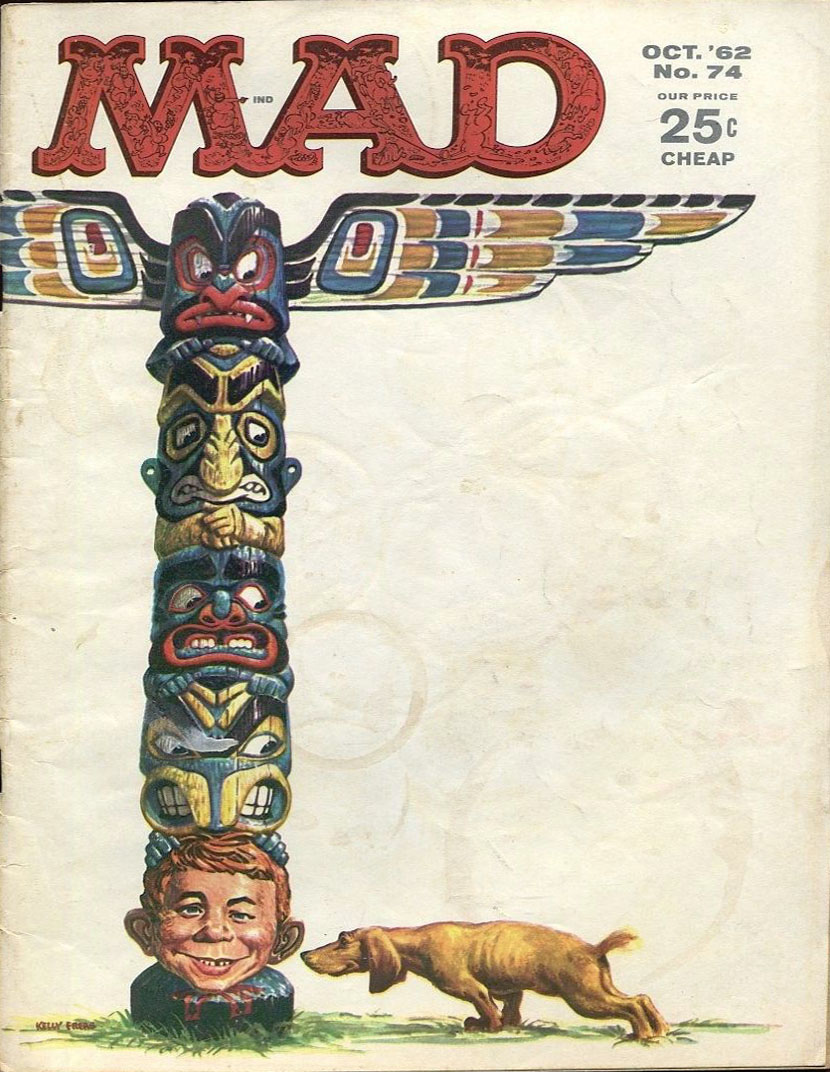 You can read more about Old Plank in these posts: