My grandmother Pearl Reed Cleage, did not think much of Idlewild vacations when her children were growing up, because she still had to do all the cooking, washing and other chores she did at home, but without the familiar home tools. Everybody else loved it and they probably went out on the water in a row boat and went swimming and fishing and visiting friends. Maybe the older ones went to dances. While Grandmother cooked and washed and did the usual. I hope she also had time to sit outside and relax. They rented houses until the 1940s when Louis Cleage built a cottage.

I remember my grandmother reading to us from the book “Told Under the Red Umbrella” the summer of 1953. The electricity went off during a storm and she read to us by the kerosene lamps until the lights came back on. During that trip I am sure my mother and aunts did the cooking.

Beginning in 1915, African Americans from throughout the country, particularly the Midwest, came to Idlewild in the summer. During the early years the resort offered beaches, boating, and other typical summer diversions. By the 1920s and into the 1960s, however, Idlewild’s rousing nightlife lured swarms of viitors to the community to see elaborate floorshows and some of America’s most popular black entertainers. the Arthur Braggs Idlewild Revue toured the country during the off-season, spreading the Idlewild name. The 1964 passage of the Civil Rights Act – comprehensive legsation that prohibits segregation- opened doors for blacks to stay at previously whites-only resorts. Idlewild’s heyday ended, but it remained the largest African American resort in the nation.

“Hugh, Gladys and Anna Cleage of Scotten took their share of places in the annual city ice skating meet which was held at Belle Isle last Sunday afternoon.  Anna won first place and a gold medal in the Senior girls’ novice; Gladys, third in the same event and  a gold medal.  Hugh competed in the men’s 220 and two-mile events.”

This article is from one of the Detroit daily papers and is undated, but I would place it in the early 1940s.  Years later when I was talking about this photo with my aunt Anna, she said that the story was wrong and that actually she came in third and Gladys won the race.  She remembered taking an early lead in the race but soon falling behind as Gladys easily over took her.  They learned to skate at the  Northwestern High School skating rink, which was a few blocks from their home on Scotten.  When my sister and I were in high school at Northwestern in the early 1960s we skated at the same rink.  We got racing skates because Hugh and Gladys were so cool skating on the Lagoon at Belle Isle, but we were never gold medal material.  The old Northwestern High School is no longer there.  It was torn down and a new school was build where the skating rink used to be.

In 1986 my husband and I moved to  Idlewild,  Michigan with our children.  We lived on Idlewild Lake.  When it was frozen we skated right in front of the house.  Hugh and Gladys could still skate circles around us.  During the summer when Gladys and I walked around the Lake, people from Detroit’s Old West Side would stop us to ask if she was the skating champion.  She was in her early 60s. This week I wish I had some skates.  It would make it so much easier to get around frozen Atlanta.  Above is a picture of four of my children skating on Idlewild Lake about 1990.  To see more Sepia Saturday offerings click here.

It was the summer of 1953. My sister and I stood on my uncle Louis Cleage’s dock in front of his cottage in Idlewild, Michigan holding our dolls. The summer of 1953 my mother, sister and I stayed with her parents on the East side while my father stayed with his parents on Atkinson. We were between houses as a Church fight had resulted in us having to vacate the parsonage. We moved to the new parsonage at 2254 Chicago at the end of the summer.

I remember riding on the floor of my grandparent’s car on the way there, my grandmother reading to us by kerosene lamp during a storm that put the electricity out, fishing off of the dock, the catfish that lived underneath it and being out of the city for an extended time for the first time in my life.

On the left my Uncle Henry is holding a ten inch blue gill that he and my mother caught in September of 1977 in a boat off of my Uncle Louis’ dock on Lake Idlewild.  They would fillet them and freeze them in empty milk cartons.

On the right is a boat in front of Louis’ cottage on Idlewild Lake. I can’t quite make it out, but could be them catching the above string of fish.

In June, 1979 my mother sent to the Emergency Land Fund’s newspaper “Forty Acres and A Mule” her recipe for cooking blue gills.  I wish I had a plate of those blue gills right now. 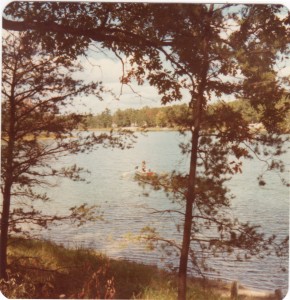 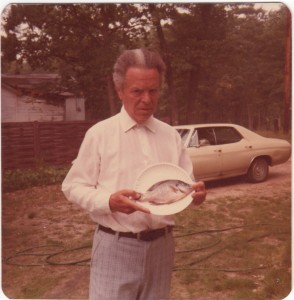 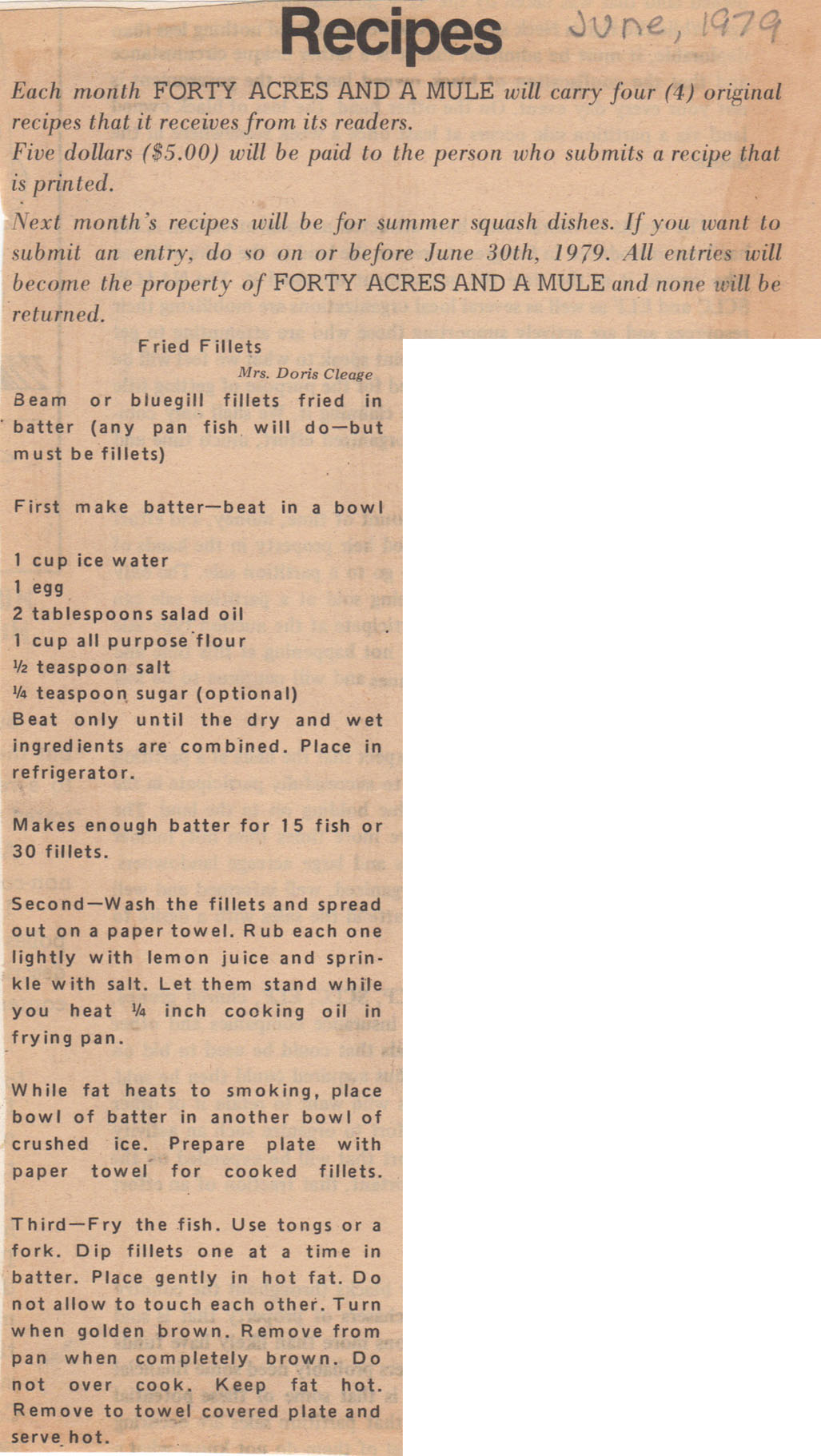 I just remembered this letter with a drawing of a fish that my mother wrote to Henry from Idlewild in 1956.

“In between showers, the children & I go outside to see what’s up.  The lake is full of minnows & baby bass & even some half-size bass who stay around our beach.  But the rowboat isn’t even down the hill – and the other boats are too fast – everything is gone before you even get to it – including the lake.

I’ve spent two evenings with Louis & his guests – and they took me out to “night club” – but they’ve given me up, I think, as a confirmed “prude” – but a pleasant innocuous one.  I’ve been reading the book about Bronson alcott (no, I won’t tell you who he is) and also…”

I was going to write about the time when we hand printed fish one spring in Idlewild. Unfortunately, we don’t seem to have saved any of our prints. I did not know printing fish was a Japanese art form called Gyotaku.  Ours were not as lovely as those at the link, but they were interesting.

Note:  My sister tells me she has some of those prints. Whenever she finds them, I will add them to this post.

In the summer of 1945 my parents moved from Los Angeles, where my father had been studying film making, to Springfield, MA. He was the new pastor of St. John’s Congregational Church, an historic African American church.  During their trip across country they stopped in Detroit to see their families. A trip to my Uncle Louis’ cottage in Idlewild was included.  More photographs from that trip can be seen here – Idlewild 1945.

Back in the day, my uncles Hugh and Louis Cleage used to go up to Idlewild and ski. Sometimes my boy cousins got to go with them, but never any of the girls. It was a male bonding time, I guess.  Anyway, we never did learn to ski, my sister and I, while the boy cousins became quite good at it. They sometimes went to Caberfae, a skiing resort very close to Idlewild. You can read about the history of Caberfae, with photographs, here Caberfae Peaks: 75 Years of Michigan Skiing.

My kids went cross country skiing there a few time.  I wonder if I have any photos.  Don’t seem to. 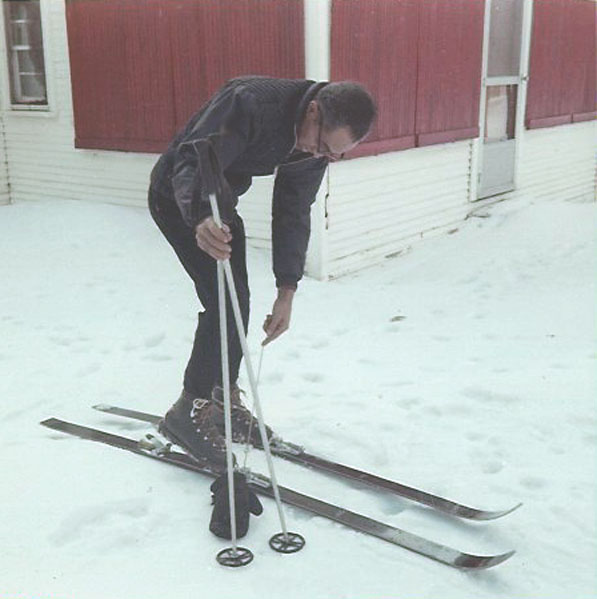 Getting ski’s on next to Louis’ cottage. 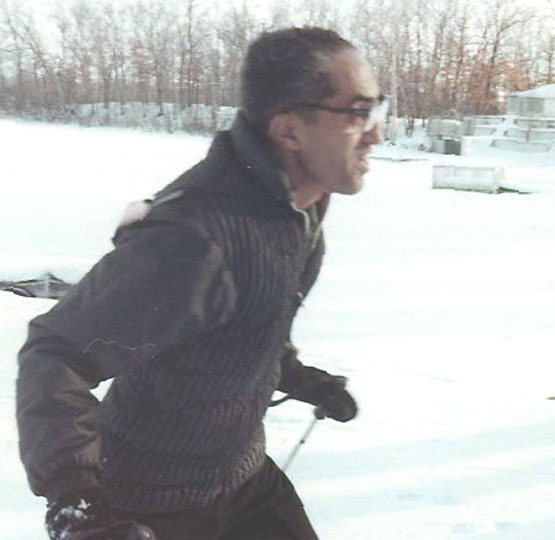 In 1943 my Uncle Louis Cleage and family friend, Paul Payne bought some lots in Idlewild, Michigan. Idlewild is a black resort located in the Manistee National Forest in Lake County. It’s 5 hours north of Chicago and 4 hours northwest of Detroit. Lake Michigan is half an hour away at Ludington.  I’ve posted some photographs, documents and letters showing the progress of the original cottages. They did much of the work themselves.  If you find the letter my grandfather wrote back to Detroit hard to read, scroll down to the transcription below.

During  WW 2, two of my uncle’s were conscientious objectors and farmed near Avoka, MI. They had milk cows and chickens, among other things. Their younger sister sold the eggs in Detroit around the neighborhood. While she was up in Idlewild, she needed someone at home – her mother – to handle the egg route. Like a paper route, but with eggs. Read more here.

P.S. “Pee Wee” speaking. My egg route book is in my room on the table in the small bookshelf. You know that black book, don’t you? Oh, yes, add Mrs. Duncan on Scotten to Monday’s list.

We arrived about 2 o’clock. The trip was uneventful except for rain – on and off.  Mrs. Hedgeman and Stith were here when we arrive just about ready to leave.  Cottage is nice, was awfully cold and gloomy out.  The rain seems over now and we are hoping for a brighter, warmer and happier day tomorrow.

The girls are now investigating the yard, lake, boats, etc.  Gladys and I crossed the continent and visited the cottage with bad writing of J.L. Cleage and Payne – well, will say you have a nice location with huge possibilities.  Nice beachhead etc, and hedgerows.

House is wired, but electricity has not been brought in from road.  I have seen Mr. Ellison. He was not in when I first went but talked to the man who was and he wired it.  He stated could not get the wire for bringing it into the house on account of it being a “tourist” cabin; and he didn’t think would be able to get it this year.

Later saw Mr. Ellison who said he would see about it again Monday and let me know what he can do.  I will also see the Edison Co. if possible and urge the emergency toward the war effort etc.

There don’t seem to be many people here. However it is so cold they maybe in the house.  Hope everything is alright. We will get the boat tomorrow.  Everything will be ok. Write further instructions, if any – Anna Celia’s egg route book in her room on bookshelf –

The summer of 1956, my mother would sometimes row over to the “island”, which was downtown Idlewild, not a real island, although you did have to go over a bridge or a drainage pipe to get there. At that time, Idlewild was booming, a place for 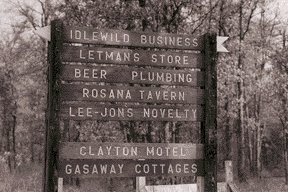 black people to go in segregated America and forget about all that for awhile. Big name acts preformed at the Flamingo Club and there was a skating rink in the club house. But when we rowed over in the morning, we were going to get the paper or milk or something else mundane.

Sometimes my sister Pearl and I would take our savings and shop at Lee-Jon’s or at Ma Riddle’s Log Cabin.  At Lee-John’s we bought tiny bears with movable limbs, about 3 inches tall. At Ma Riddle’s, we mainly looked while she tried to sell us salt and pepper

shakers that looked like picnic tables. Her store was a real log cabin.  I don’t remember going inside because it was so small that the front was a shutter she raised and lowered and you looked at the merchandise right there.

I wonder why we weren’t wearing life jackets in the photo above. We certainly couldn’t swim at the time. There were life jackets because I remember playing in the water and wearing them. The lake was 4 miles around and there were spots, my Uncle Henry used to say, where the bottom had never been found.