Vivian Vaughn McDonald was my second cousin. Her grandmother Josie Cleage and my grandfather Albert B. Cleage Sr. were siblings.

Thanks to Jody DeLoach for sharing photographs, and to Tanya Harris for sharing the funeral program with me.

Mr. Joe Jackson was the youngest son of Annie Mae Graham, my grandfather Mershell C. Graham’s sister. In his early youth he was known by Michele, but later changed to Joe. A thank you to my cousin Cedric Jenkins for sharing this program with me.

Clyde was the oldest son of Annie Mae Graham. I do not have a funeral program for him, but do have an obituary from the Montgomery Advertiser.

Will Jackson, Sr. was the 2nd oldest son of Annie Mae Graham. He was a nephew of my grandfather Mershell Graham.

Earlier this year I met via Ancestry.com Cedric Jenkins, a newly found cousin, who is a descendant of my grandfather Mershell Graham’s sister Annie Graham. He shared this funeral program and also programs for Annie Graham’s children, which I will share in the coming days. My grandfather and his sister lost contact after he moved to Detroit.

Her early childhood was spent around Elmore County. At an early age she confessed hope in Christ and joined the fellowship of the East Chapel Methodist Church under the pastorate of the Rev. Ed. Bowens.

She was a member of the Esthers of America. She was always ready to serve and willing to give. She met everyone with a smile. She was a good neighbor, who would always come to the rescue and do whatever she could for others.

She departed this life October 15, 1964 at the home of her daughter.

Servant of God, well done,
Rest from thy loved employ;
The battle is fought, the victory is won;
Enter thy Master’s Joy.

Links to more about Annie Graham
R is for Relatives, of the Elusive Kind
Mystery Photograph
Annie Graham – Sibling? 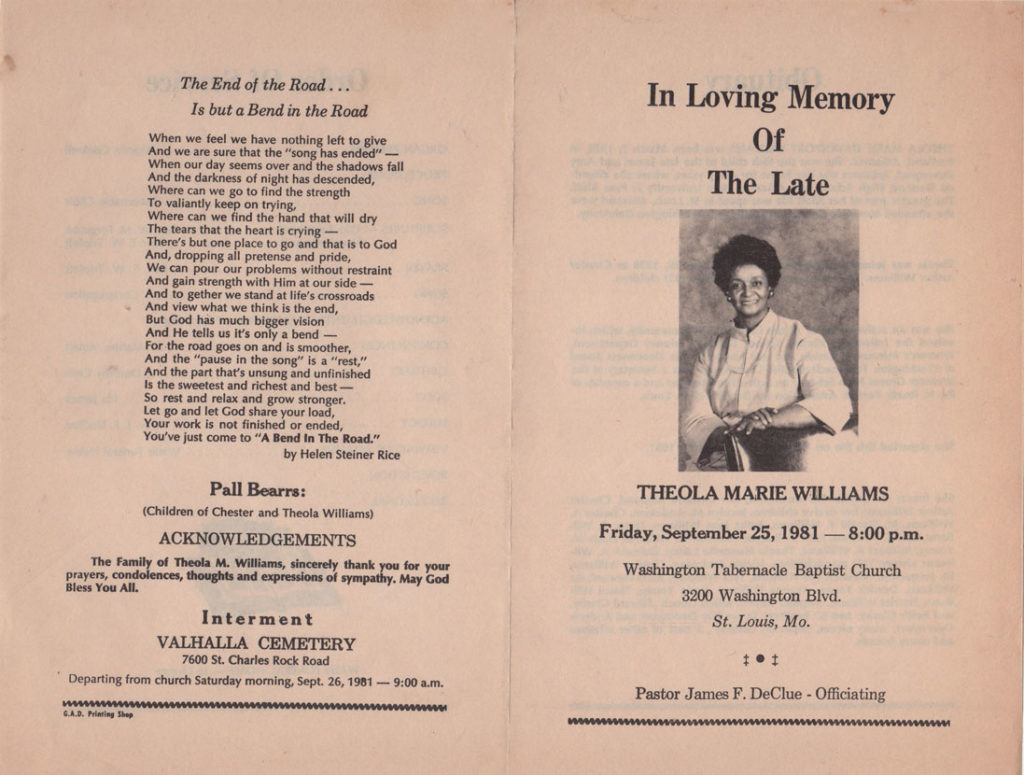 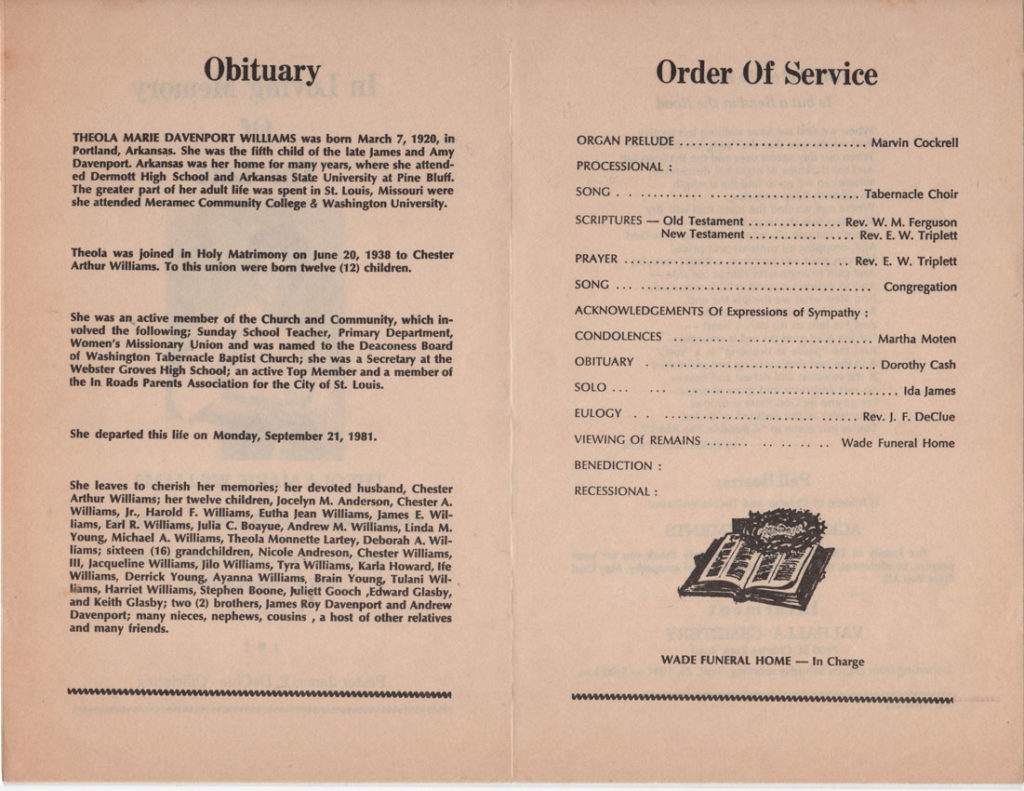 Other Posts about Theola Davenport Williams

Gladys was my father’s sister and my aunt. She contributed her spit for DNA testing, helping make new family discoveries.  I spent much time with Gladys when we both lived in Idlewild. We used to walk to Head Start together. I remember she told me some of her childhood  and adult memories and I wrote them down in one of my notebooks, and I haven’t been able to find them, but I am going to go through page by page soon.  She also shared memories of her extended family, which I quote in some posts. Gladys also shared with me the letters that her father wrote to her mother when they were courting, which I used to write an A-Z series several years ago Index to the Letters from Dr. Albert B. Cleage.  I wish I could have shared the letters that her mother wrote to Homer and the information about my grandmother Pearl’s uncle Thomas Allen who fought with the USCT in the Civil War. Hopefully, she knows.

Pearl D. Cleage, a founder of St. John’s Presbyterian Church in Detroit, died Saturday while vacationing in Idlewild, Mich. She was 94.

Mrs. Cleage, a Detroit resident since 1915, was the widow of the late Dr. Albert B. Cleage SR. and the mother of Reverend Albert B Cleage Jr., minister and founder of the Shrines of the Black Madonna, who began the Black Christian Nationalist movement in Detroit in the late 1960s. The Shrines are in Detroit, Atlanta and Houston.

Mrs. Cleage often lectured on African-American history. She was a member of the Auxiliaries of the Iota Boule and Alpha Phi Alpha Fraternities.

Other posts about my paternal grandmother, Pearl Doris Reed Cleage.

Introduction to the letters my grandfather Albert B. Cleage wrote to Pearl Reed before their marriage from 1907 to 1910.

For years, my aunt Anna was the pharmacist at my uncle Louis Cleages clinic. When we went to the doctor’s, my sister, mother and I would stop in the back for a visit with her. Sometimes she would give us things that I guess were trinkets from the drug salesman. The only one I remember was a pile of what looked like pennies painted a gold color and glued to look like a heap.

Many year later, when I was grown and living in Idlewild with a family of my own, I would always stop by and visit my aunt and uncle, Anna and Winslow in Detroit. They both had great memories and a wealth of family stories. I would drink tea and eat cookies or something while they told me tales of the family’s past.

Anna had a distinctive laugh and my daughter Ife sometimes laughs in the same way. I do miss them still and wonder what stories we never got around to.

Other posts about Anna 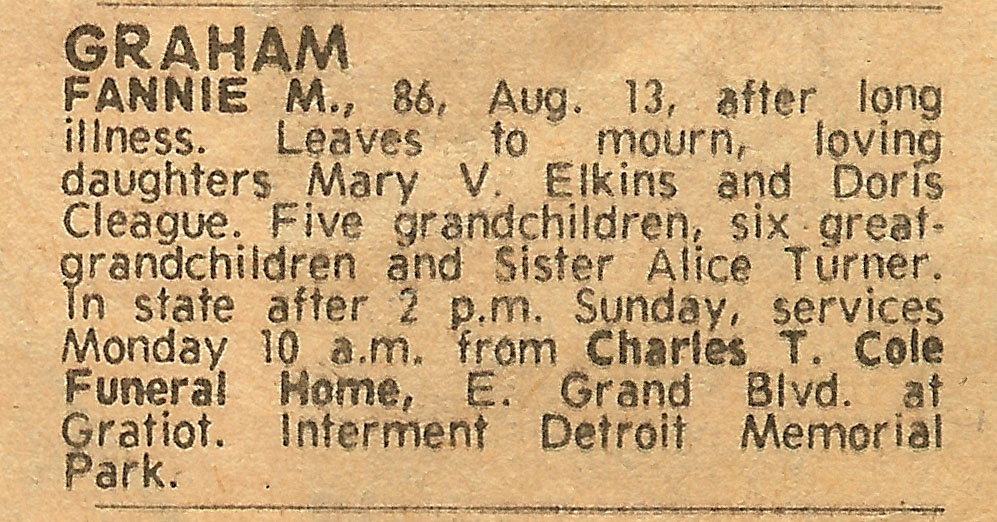