Today would have been my mother-in-law, Theola Marie Davenport Williams, 94th Birthday. It’s hard to believe so much time has passed since she left us much too soon in 1981.  In honor of the day I am sharing the Marie’s in the Davenport/Williams family.  There may also have been some cousins with the middle name of Marie but I am unaware of them at this time.  Click to enlarge the chart. 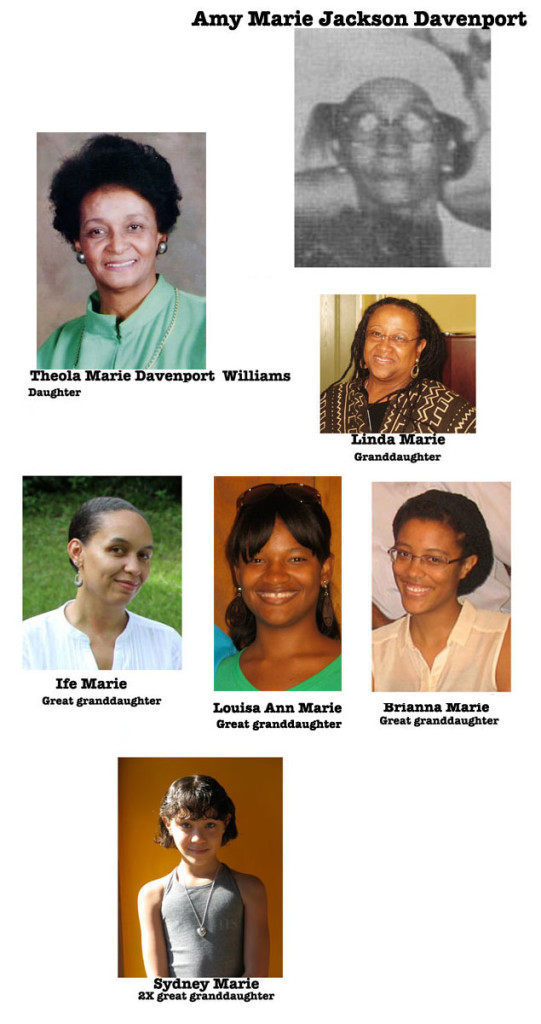 1.  Amy Marie Jackson Davenport was born in Portland, Arkansas on March 17, 1891 to Allen Jackson and Lettie Gray Jackson.  She married James Davenport of Mer Rouge, LA in 1909.  They made their home in Portland, Ashley County, Arkansas.  They were the parents of 7 children.  Most of the children migrated north to St. Louis, MO and Chicago, IL. In 1967 Amy died in Chicago, IL.  I wish I had a better photograph of her.

2. Theola Marie Davenport Williams  was the daughter of Amy Marie Davenport.  She was born March 7, 1920, in Portland, Arkansas, the fifth child of the late James and Amy Davenport. Arkansas was her home for many years, where she attended Dermott High School and Arkansas State University at Pine Bluff. The greater part of her adult life was spent in St. Louis, Missouri where she attended Meramec Community College and Washington University.

Theola married  Chester Arthur Williams on June 20, 1938.  Together they had 12 children – 6 sons and 6 daughters. She was an active member of the Church and Community, which involved the following; Sunday School Teacher, Primary Department, Women’s Missionary Union and was named to the Deaconess Board of Washington Tabernacle Baptist Church; she was a secretary at the Webster Groves High School; an active Top Member and a member of the In Roads Parents Association for the City of St. Louis.  She was 61 years old when she died September 21, 1981.  I remember her as a very calm, accepting and thoughtful mother-in-law.

3.  Linda Marie, born in 1954, is the daughter of Theola and the granddaughter of Amy.