Today begins the 2014 April A-Z Challenge. I will be blogging everyday using items taken from the letters written by my grandfather to my grandmother from 1907 to 1912, starting with “A” and moving right through the alphabet to “Z” during April.

Albert B. Cleage’s letters begin in 1907, shortly after he met Pearl D. Reed.  The letters end in 1912 as they prepare for a move from Indianapolis, IN to Kalamazoo, MI.  This is the first letter in the collection. 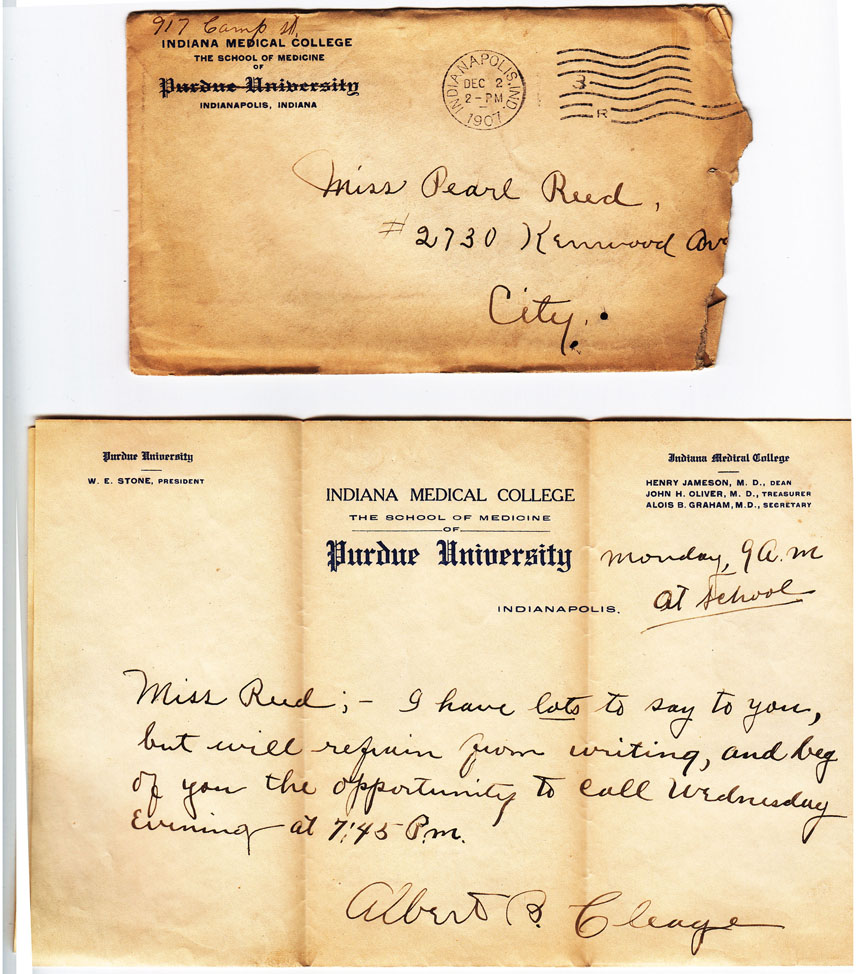 Miss Reed; – I have lots to say to you, but will refrain from writing, and beg of you the opportunity to call Wednesday evening at 7:45 P.M.

My grandfather was born Albert Cleage in Loudon County, Tennessee on May 15, 1883.  He was the 5th and youngest child of Louis and Celia (Rice) Cleage.  His parents were born into slavery and were free after the Civil War. They married in Athens, TN in 1872.  By 1880 the family was living on a farm in Louden County, TN. Louis sharecropped 15 acres.

By 1891, the family was back in Athens. Albert was 8 years old. His parents were divorced and in 1897 his mother was married to widower Roger William Sherman, a successful carpenter. His father worked at laboring jobs in various places, from the railroad to the mines of Birmingham, AL.

In 1902 my grandfather graduated from Henderson Normal and Industrial College in Henderson, NC where his brother-in-law was teaching. He attended Knoxville College 4 years where he played football and wrote for the school paper in addition to studying.  On the way to one of these schools my grandfather decided that he needed a middle name and chose the name of “Buford” from a sign he passed on the train going to school.

In 1906, after graduating from Knoxville College, he followed 2 of his older brothers to Indianapolis, IN and attended the Indiana University Medical School. In 1907 Albert, his brothers and my future grandmother all signed a petition asking for the formation of Witherspoon United Presbyterian Church. During the summer of 1909 he worked as a waiter on the steamer, Eastern States which ran from Detroit to Buffalo NY. The money he earned funded his college education. He graduated with his MD on September 1, 1910.  He received appointment as an intern at the City Dispensary. On September 21 he and Pearl Doris Reed were married at her home.

In 1911 Pearl’s mother died and the first of their 7 children was born – Albert B. Cleage Jr, my father.  In 1912 the family moved to Kalamazoo, Michigan where my grandfather set up in private practice.  And that takes us to the end of the time covered in these letters.

30 thoughts on “A is for Albert Buford Cleage”