On a Sunday in December, when my aunt Mary Virginia was eight months old, my grandmother held her on a tricycle for a photo opp.

The baby doesn’t look very happy about it. She looks cold, or terrified.Even though the weather called for rain instead of snow which made it rather warm for Detroit, I imagine it was still pretty cold.

I don’t know if the tricycle was an early Christmas gift or if it belonged to another child, a friend of the family because Mary Vee was the first and oldest child of my grandparents, Fannie and Mershell Graham.

Another photograph with a story I don’t know.

This is not the first time Bicycles have been a sepia Saturday prompt. Here are some of my past responses:

“This is not the picture of a family reunion, although all in the group, with the exception of one intimate friend, are relatives who stood in the receiving line or assisted otherwise at the “At Home” given Monday evening, December 26 from 6 to 9 o’clock, at the McCall’s residence on Parker avenue, the affair was in honor of Dr. and Mrs. Joseph H. Howard, of Chicago, brother and sister of Mr. and Mrs. J. E. McCall and Mrs Robert F. Johnson, a sister, greeted guests at the door, while Miss Mary Virginia Graham, a cousin, acted as registrar. Mrs. Moses L. Walker, a sister, introduced the guests to the host and hostess, who in turn presented them to others in the receiving line – Dr. and Mrs. Howard, the honorees; Miss Victoria McCall, daughter; Miss Louise McCall, niece, of Chicago; and Miss Mignon Walker, also a niece. Mrs. William Hawthorn, a friend of the family, presided at the punch bowl, assisted by Miss Doris Graham, a cousin of the McCalls; and Miss Margaret McCall, a daughter. At the close of the reception, the principals and assistants stood together and were snapped by the camera. They are left to right: Doris Graham, Mignon Walker, Louise McCall, Victoria McCall, Dr. and Mrs J. E. McCall, Mrs. M. I. Walker, ( not named was Margaret McCall) Mrs R. F. Johnson, Mary Virginia Graham and Mrs. William Blackburn.”

The Detroit Tribune was published by James E. McCall and his wife, Margaret Walker McCall. He was also a poet and had lost his sight while attending college after having typhoid fever.

The links below take you to more information about various people in the photograph.

This picture was taken at Belle Isle in 1930, which used to be a city park in the Detroit River and was free to all. It has since been changed to a state park and there is a fee for entry. Howard must have been almost one year old, he had been born the previous September. He seems to be wearing a gown. Mary Vee was ten and Doris was seven.

Reading an article in the Dec 12, 1939 edition of The Detroit Tribune, about a concert Marian Anderson gave in Detroit, I was surprised to find a number of family members and friends among those who attended. My mother had several of Marian Anderson’s records, but she never mentioned hearing her in person. Click on images to enlarge.

“According to Anderson biographer Allan Keiler, she was invited to sing in Washington by Howard University as part of its concert series. And because of Anderson’s international reputation, the university needed to find a place large enough to accommodate the crowds. Constitution Hall was such a place, but the Daughters of the American Revolution owned the hall.

“They refused to allow her use of the hall,” Keiler says, “because she was black and because there was a white-artist-only clause printed in every contract issued by the DAR.” Denied a Stage, She Sang For A Nation

Photographs of some family members and friends who attended the concert. Family photographs.

In 1937 Mary Virginia, my mother’s older sister, was 17 and a senior at Eastern High School, on East Grand Blvd within walking distance of the house on Theodore Ave. She graduated in June and in September went to Business College where she excelled in typing.

After attending business school, Mary Virginia worked for awhile at her cousin James McCall’s Newspaper, The Detroit Tribune. In 1940, he helped her get a good job typing with the city. She held the job for many years and received a proclamation from the City of Detroit for her service to the city during a Family Reunion when she was in her 80s.

Below is a transcribed article from Nov 20, 1937 issue of The Detroit Tribune. The clipping is below.

“Now for a bit of “Who Goes Where.” Running true to the Tribune’s policy of giving our young people a chance, we here introduce Miss Mary Virginia Graham of Theodore Street, and this is what Mary Virginia tells us: “There were a number of social gatherings over last weekend, so there was plenty of competition.

“The Beta Mu Chapter of the Alpha Kappa Alpha Sorority had a dance at McKenzie Union. St. Matthews had their annual Balloon Dance, the play “Go Down Moses” was presented at Cass Technical High school; an Armistice dance was held in Windsor—this was all held on Friday night so everyone had somewhere to go.

“Well, the dance at the Mackenzie Union wasn’t lacking for guests either. Those seen swaying to George Dunbar’s recordings were: Margie Dunbar and her one and only Kermit Bailer; Carolyn Plummer and Toddy Cleage, Alice Stanton and Henry Cleage, Mary V. Graham and Carlyle Johnson, Oscar Hand, Charlotte Watts with Bassett Jones, who seems to be giving the little girl quite a rush; Eddie Donald, Frances Raiford with a very handsome stranger; Mr. and Mrs. Kenneth Stanton, Mr. and Mrs. Harry Solomon, Mr. and Mrs. C. Johnson, Marjorie Greenidge, Francess Horner and Billy Russell, Spencer Cary, Lorraine Moss and Albert Wallace, St. Clair Billups, Walter Greene, that wise cracker; Frederick Cain. Theodore Woodson and others too numerous to mention. The Union certainly looks swell after its recent doing over.

“Shirley Turner, Doris Graham, Connie Stowers and M. V. Graham, attended the play “Richard Bordeaux” which was given by the Wayne University players at Wayne last Saturday. The girls reported that the play was put over very well by these student players.

“The Social Sixteen Club is really going places since its organization about 3 months ago. The members give this credit to its president, Miss Doris Graham and its secretary-treasurer, Miss Shirley Turner.”

Thank you, Mary Virginia. You have done well and we invite you to chat with us at another time.

In my grandmother Fannie’s scrapbook, I found two library cards made by my mother, Doris and her older sister, Mary Virginia in 1931.  My mother was 7 and Mary Virginia was 11.  There is no book listed on my mother’s card but Mary Virginia names “The Children’s Story Hour” on hers.  I wonder what other books they borrowed and lent or if this was a one time happening. I did notice that Mary Virginia returned her book on time. 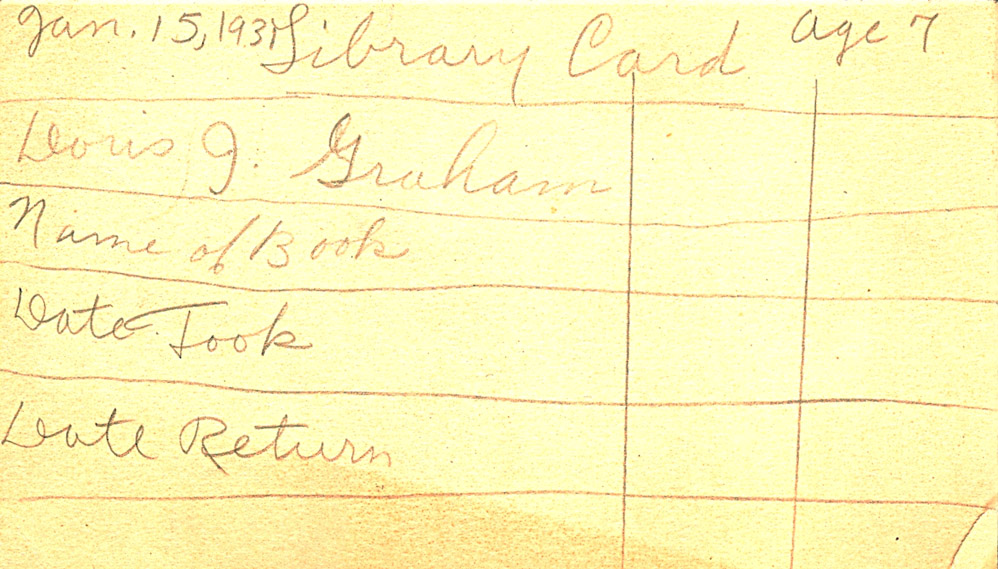 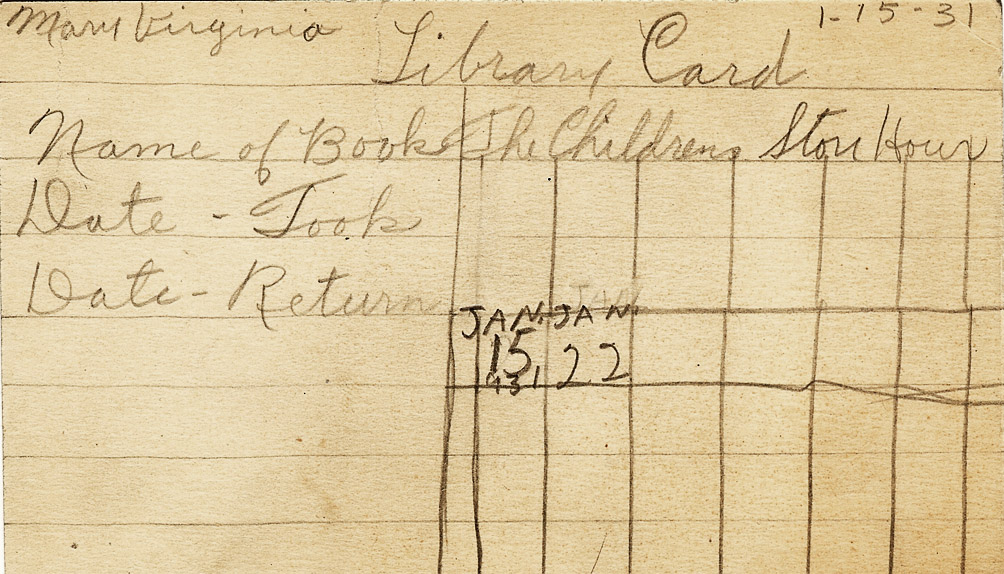 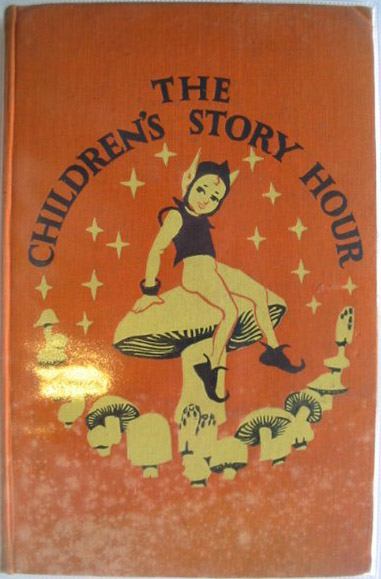 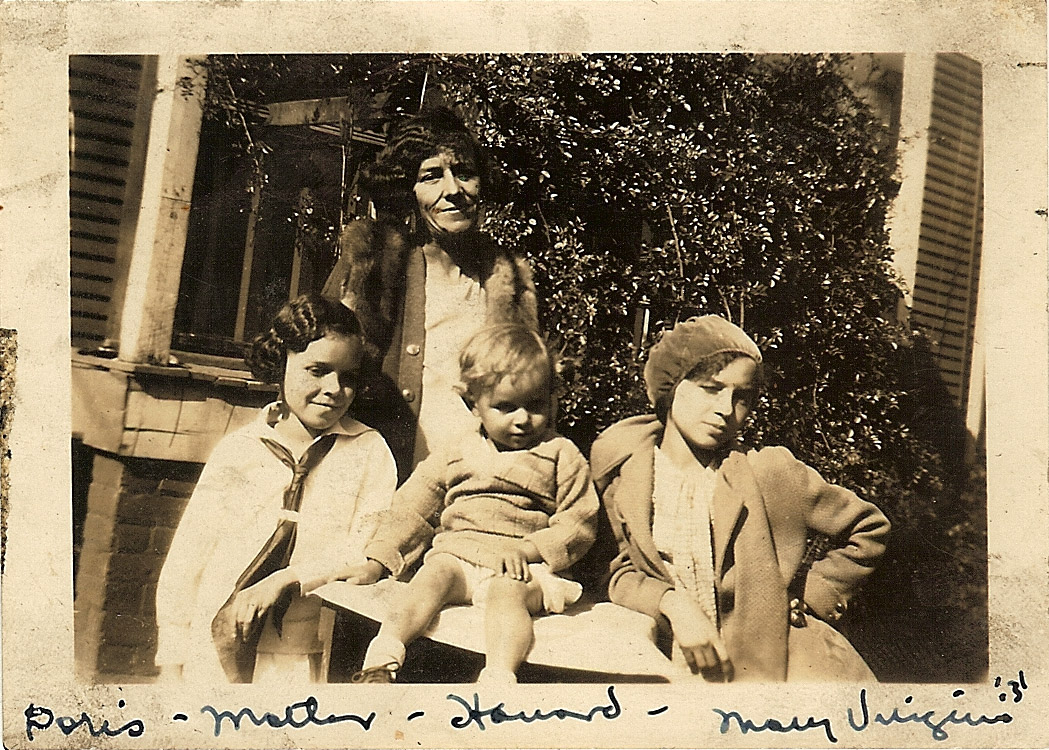 This photograph was taken later that year in their backyard. Howard died of scarlet fever the following year. He was two and a half.

Mershell, Mary V. and Doris Graham, my mother sitting on their front steps waving balloons on sticks. It was 1926.  The house was on Theodore, the east side of Detroit. Sometimes I dream about this house and the porch usually figures in the dreams as I leave or enter or start down the street going somewhere.

My mother Doris and her sister Mary Virginia with their dog Bonzo.  The picture was taken in August 1932, about 6 months after their brother Howard died of Scarlet Fever.  Mary V. was 12 and Doris was 9.  The sisters were granddaughters of Jennie Virginia Allen Turner, who was the daughter of Dock and Eliza Allen.  My mother later had a sister-in-law named Gladys Cleage, who will celebrate her 93rd birthday this Saturday.  I could not find a photograph of her with a sister and a dog, but here she is with sister Anna.

Gladys and Anna were the grandchildren of Lewis and Anna Cecilia Cleage, and great granddaughters of  Frank and Juda Cleage of Athens, TN.

My mother said that after a difficult birth, her sister Mary V.’s foot was turned inward.She did not  know if this was the fault of the doctor or not, but Mary V. wore a brace for years.

Mary V’s grandson, Ahmad Elkins, posted the pictres below on fb recently.  They are his grandmother’s well worn baby shoes, saved through the years.  Amhad shared his photographs with me and gave me permission to post them here. 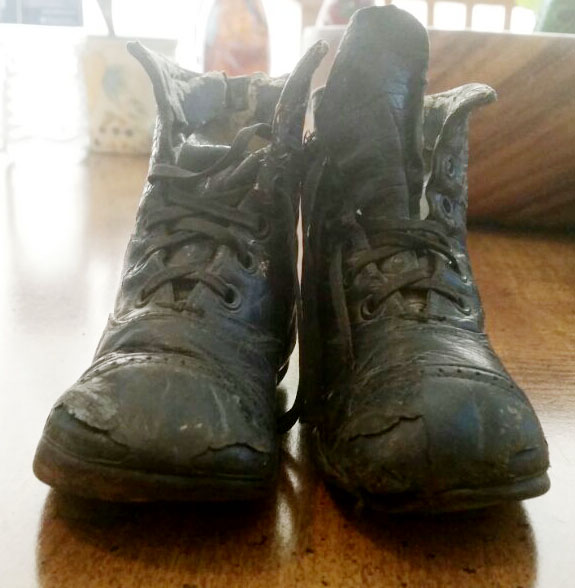 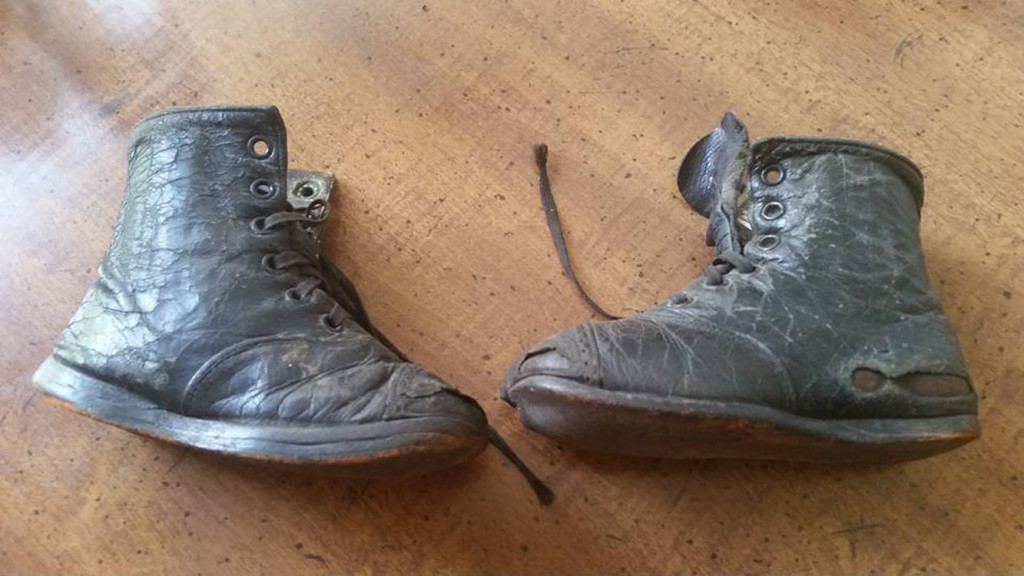 Two other posts about Mary Virginia Graham Elkins are: