My cousin Barbara was six years old when this photograph was taken.  She is holding a little parasol and standing at the edge of their front yard.

In age, Barbara was right between my sister Pearl and me. Every year my father took the three of us to the Michigan State Fair.   We went to the Fair right before the end of summer vacation in early September.

I remember buying little parasols like the one Barbara is holding. They were pin. blue, or yellow with flowers on them. We also liked to buy pop beads that snapped together into bracelets and necklaces. I don’t remember using them after the fair. They were part of the experience, like the cotton candy.

Living in Detroit, we didn’t see livestock everyday, but we saw it at the fair. I remember King Romancer the 23rd (or something along those lines), the bull who had sired many, many prize winning cows. And the time we rounded a corner to see a huge boar heading down the aisle towards us. Pearl and Barbara jumped behind me. There was someone with the boar and my father was right behind us, so all was well. We watched a 4-H cattle show where a girl kicked her losing heifer.  As we walked through the various barns full of animals, I was envious of the young people who had cots in stalls near their animals.

The only ride we ever went on was the “Tilt-A-Whirl”. It was one step up from the Merry Go Round, and it gave me an upset stomach every year. We must have left for home soon after enjoying this exciting ride.  I’m not sure when we stopped taking our annual trip, but it was well before our teen years.

When I was growing up we spent Saturdays at my mother’s parents house, along with my cousins Dee Dee and Barbara and later, Marilyn.  When the weather was good we spent it outside in the backyard. There was a vegetable garden, lots of flowers and space for anything we could think of.

In the summer of 1953 I turned 7 in August. Dee Dee turned 10 in September. Barbara had already turned 6 in January. Pearl was 4.5 until December.  Poppy was 64. He would retire in December of that year when he turned 65. The yard was surrounded on all sides by a wooden fence that made it feel like a world apart.  In the photographs I can see the big house across the alley and a factory on Warren but when I was playing in the yard I didn’t much notice those things.

Pearl and I are holding dolls and I have a purse I remember getting when we lived in Springfield, MA. A young lady who might have been the church secretary had a grown up purse just like it.  It was brown leather and had a golden metal clasp that turned to open and close. Looks like collards with the poison Poppy sprinkled to kill the cabbage worms. I think I see a little cabbage butterfly holding on to the underside one of the leaves.

I am standing up at the table where Barbara and I are making something. Dee Dee is sitting on the arm of the swing. She was probably taking Pearl somewhere on the magic carpet (aka swing) the rider would have to say “Geni of the magic carpet, go, go, go!” and then Dee Dee would take you someplace magic.  She would tell you where it was when it was time for you to get out of the swing. Dee Dee was in charge of all the magic.  Each of our households had a little, invisible fairy that lived in the mud castle we built and rebuilt at the foot of the apple tree. Their’s was named Lucy and ours was Pinky. She also kept a box full of prizes that she gave out at appropriate times. I remember packages of soda crackers, prizes from cereal boxes and pieces of chewing gum.

Here Pearl and I are standing on the grassy part of the yard. The flowers are in full bloom behind us with the vegetables back behind them. We often made the saw horses into mounts. I see my purse over there on the grass to the left.

I have participated in Sepia Saturday for so many years that it is hard for me to come up with new photos when the same sorts of prompts come around. This week I am recycling a post from 2012.

My cousins  lived upstairs in a 4-family flat on the corner of McDougall and Hunt Street on the East Side of Detroit. Their mother, Mary V. Graham Elkins, was my mother’s sister. She worked as a secretary at the County Building.

Their father, Frank “Bud” Elkins, graduated with honors from Cass Technical high school in the late 1930s. As an electrician, he tried to join the Electricians Union but as a black man was barred.  He set up his own shop as an independent Electrician.  He drove a truck with “Elkins Electric Company” on the side. I remember riding in it a few times. There were not seats for all and we sat on the floor.

Some other stories about this family:

The Frank and Mary Elkins Family in the 1940 Census

Here I am under the apple tree with my cousin Barbara where we built and rebuilt a castle for our fairies. Each family had one. Ours was Pinkie my cousins was Lucy.  In between the castles we made various dirt pies and cakes. That little black utensil next to me was a sifter.  It had holes punched in the bottom and we sifted the dirt with it.

We used to walk up the plank against the back fence and look out into the alley. Nothing really exciting out there, most of the time although I remember the police chasing a man through there once. I am pretty sure we were not standing on the plank watching.  If we did, it was only for as long as it took an adult to call us inside While the chase went on.

It must be spring because we can see that there is no garden bu the Pussy Willow bush in the background seems to have buds.  We are wearing our light jackets (or “jumpers” as Poppy called them.) and overalls.  My saddle shoes are horribly dirty. My socks had probably slid down inside of them.  Barbara is wearing buckled shoes but her socks look quite saggy.  In the spring of 1955 I would have been 8 and Barbara would have been 7. She is missing a tooth, but not those you loose when you are 6.

My cousin Barbara Lynn Elkins was born in Detroit, Michigan on January 28, 1948.  She was the second child of Frank Lawton Elkins and Mary Virginia Graham Elkins.  Her first home was on MacDougal St. on Detroit’s East side.  Later they moved to Calvert, a few blocks from where we lived.  She attended Roosevelt Elementary, Durfee Junior High and Central High School.  She had two sons, Frank and Ahmad. She lived in the East Village in NYC for several years during 1969 – 1970 before returning to Detroit. She worked for many years at General Motors before they moved the plant to Texas. Through the years she took care of over 100 children as a foster mother.  She died October 14 after a long illness.  Below is Barbara’s Person of the Month article from 1991.

This photograph was taken in my Graham grandparents yard in 1956. 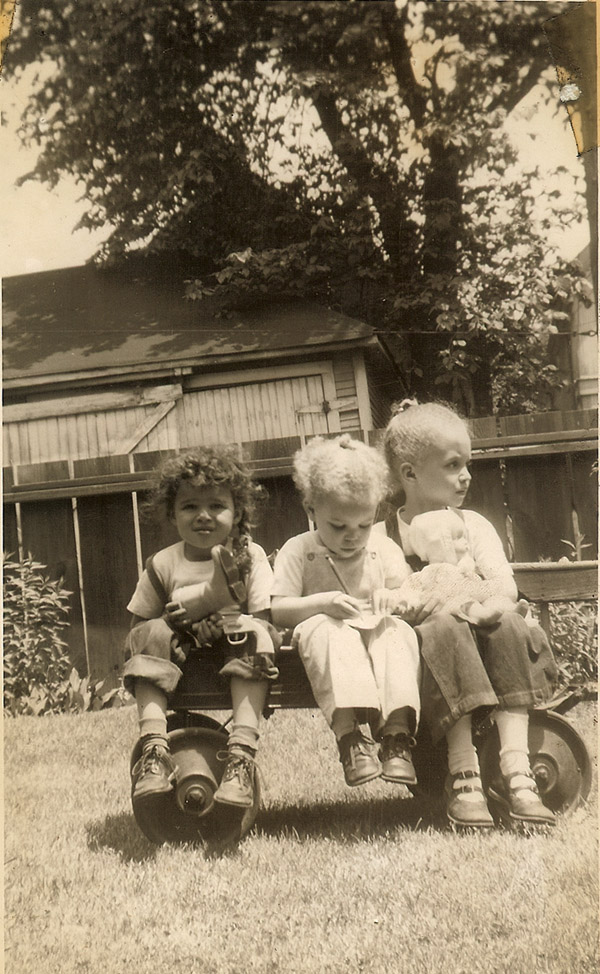 This photo was taken in my grandparents backyard. We spent most Saturdays back then at Nanny’s and Poppy’s playing with our cousins.   On the left end of the wagon is my cousin Barbara holding a cowboy boot and a toy gun. In the middle is my sister Pearl who is writing madly.  I am on the right end holding a doll and looking worried.  My sister grew up to be a writer.  I grew up to have 6 children. If only cousin Barbara had grown up to ride bucking broncos or live on a ranch or rob banks, the mirroring of the future would have been complete.  This photograph was taken by Barbara’s older sister, Dee Dee who was 7 years old at the time.

For more old photos, with or without dolls, click on the picture below.