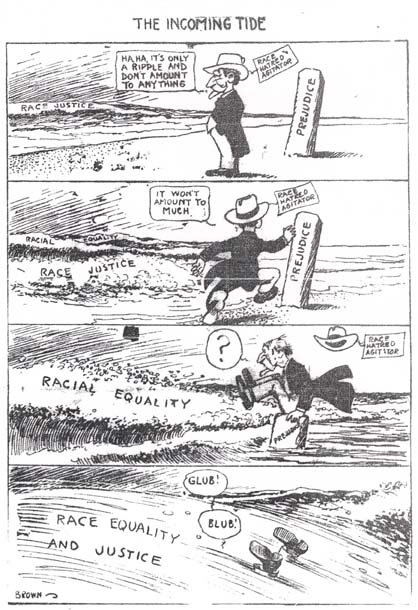 A cartoon from the 1919 July 26 issue of The Montgomery Emancipator.  It was edited by James McCall who we saw here as a young, blind poet.  He continued to write poetry and became a publisher of several newspapers, both in Montgomery and Detroit.  Below is part of an essay written by his daughter, Margaret McCall Thomas Ward.

James Edward McCall’s destiny was to become a pioneer African American journalist and Newspaper publisher.  He began his life as a mixed race colored boy in the deep south, one generation away from slavery.  His parents, Edward McCall and Mary Allen McCall, were emancipated slaves.  They were the offspring of white masters.   Edward was a skilled carpenter and Mary was a talented dressmaker.

The couple placed great stress on education and they used their resources to educate their five children to college level.  James, the oldest of the five children, graduated from Alabama State Normal College in Montgomery, Alabama.  He left Alabama for Washington, D.C. to enroll in Howard University Medical School.  At that time, he was recognized in Montgomery literary circles as a gifted poet, however, he dreamed of following in the path of his paternal grandfather who was a physician.  Fate intervened.  At the end of his first year at Howard, he contracted typhoid fever which damaged his optic nerve.  Gradually, his vision diminished and for the rest of his life he was totally blind.

He returned home to Alabama, broken hearted.  After he accepted the shock of knowing that he would never see again, he decided to look for another career.  He enrolled in Albion College in Albion, Michigan, and he graduated in 1907.  This time, he returned to Alabama with the determination to help people by using his gift and skills as a writer.  Even though he was unable to see, he had the advantage of a trained mind and a superior education.   He embarked on a crusade against injustices African Americans endured, not only in the south but throughout the United States.

In 1910, his destiny as a compelling voice for racial equality began in Montgomery Alabama.  He published a magazine dedicated to relieving the problems of domestic servants in the south by organizing and training this important work force.  He named the magazine The Colored Servant Girl, and he wrote of the dignity of this occupation in an editorial entitled “What a Blind Man Sees in Passing.”  Also, he wrote articles about the activities of the Black community, and he published the articles in the white daily newspaper.  The articles were very widely read.  The success which he enjoyed with the publication of the magazine and articles motivated him to publish his own newspaper, the Emancipator.

Now begins the story of James McCall and Margaret Walker McCall, which is a romantic saga of ambition, faith, and love which lasted fifty years.  Margaret Walker, a lovely, ambitious graduate of Hampton Institute in Virginia and Tuskegee Institute in Alabama, fell in love with the blind newspaper man.  In 1914, they married and became a team in publishing the Emancipator.  Margaret worked in the capacity of Office Manager in their businesses.  She was the “eyes” of the union.  In 1929, when the Ku Klux Klan was most powerful in Montgomery, Alabama, the life of the outspoken editor was threatened.  The McCalls decided to migrate to Detroit, Michigan.  In a safer environment for themselves and their two daughters, they continued their newspaper careers.  For several years, James, with Margaret at his side, edited the Detroit Independent, a Negro weekly that flourished through the 1920s.

By 1935, McCall was editor and owner of the Detroit Tribune, which at that time was the only Negro weekly newspaper edited and published by and for Negroes in Michigan.  He called himself a “race man”.  Quite often, he used his poetic skill to write poems such as “The New Negro.” which was published in many anthologies.  He used the Detroit Tribune to crusade for better and more jobs for Negroes, better education for Negroes, promotion of Negroes in the Police and Fire Departments, and increased voter registration.  His paper was the first to wage a fight against police brutality in Detroit.  He campaigned for Black judges in the courts, for the right of labor to organize and for Negroes to join labor unions.

Due to advancing years, the McCalls sold the Detroit Tribune in 1946 and retired.  In 1963 James Edward McCall died.

This is a shortened version of that published, in full, in “Our Untold Stories A Collection of Family History Narratives” Compiled and written by members of the Fred Hart Williams Genealogical Society of Detroit, Michigan You learn more about the book, which includes 64 African American family history stories, here Fred Hart Williams Genealogy Society. It’s available on ebay also.