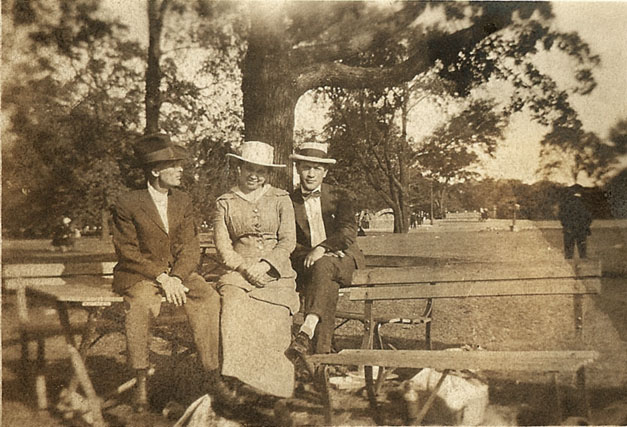 This photograph is dated September 1, 1919. The people from left to right are – my Grandfather Mershell C. Graham (aka Poppy), Mrs. Hicks from Chicago and Moses L. Walker. They seem to be having a picnic. I don’t know who Mrs. Hicks is. She only appears in the photos from this day. Uncle Moses wasn’t actually our uncle. He was the uncle of our cousins and an old friend of my grandparents from Montgomery, Alabama. My grandparents roomed with the Walkers when they first moved up to Detroit in 1918 and they were my Aunt Mary V.’s Godparents.

I have transcribed below an interview my cousin Margret did with Uncle Moses daughter, Mignon.

Today is May 15, 1986. I am going to interview Mignon Walker Brown, my cousin, about her mother and her mother’s interest in cosmetics.

Margaret: You know, Victoria and I were over here one day about a month ago and in the conversation you described a recipe your mother used to make a face cream. Can you remember what it was she used to put in the face cream?

Mignon: Yes it was really not her recipe, it was her sister’s recipe who was a beautician in Chicago. She used lanolin, which was lamb fat. You bought the big pieces of lamb fat and you rendered them in the oven under a very slow fire (can’t understand several words) get too brown. You keep turning the fire off so it wouldn’t cook. And then when you had enough…there was a preparation called Palmer’s Skin Success. Now my aunt had a… the reason she used this in it, was she had a big beauty parlor down in the loop in Chicago…

Margaret: What was her name?

Mignon: and she had a rich Jewish cliental and they wanted their skin kind of bleached. Palmer’s Skin Success was a bleach. It was a green preparation came in a small jar that we bought, that my mother bought and you beat the lanolin with a rotary beater until it got very, very light and then you added this Palmer’s Skin Success, enough for whatever, you know, I don’t remember the proportion of that but enough to bleach as much as you wanted to. And then you added perfume to that. And that was the cream. And my mother used it and my aunt told her she was way ahead of her time because she used to go to Sweden every year to study and she used to make up her face to go to bed at night like you make it up in the daytime and this was before they had night creams and things. And she said that your face got as dirty at night, even though you were sleeping, as it did in the day, so that you should make it up to go to bed and then make it up again in the morning, which is the same principle as using night preparations. And that’s been… I was a little bitta girl then.

Margaret: And that would have been about 1920?

Margaret: What was your mother’s maiden name?

(pause) It was in Chicago but I don’t remember the name of the shop.

Margaret: Did you ever visit your aunt in Chicago?

Mignon: Yes, they lived in Hyde Park. They lived as white all their lives. My mother didn’t like being white so she went back to live with her grandmother in Memphis, but Aunt Susie, there was a brother, Joe who was my mother’s half brother too, but they were siblings, full siblings, Aunt Susie and Uncle Joe lived with my grandmother in Hyde Park and Aunt Susie really made a lot of money. They never…

Mignon: Mausby M-a-u-s-b-y. And I didn’t know much about her father except that he ran what they called… I’m trying to think of what they … like Ferris wheels and that kind of thing. You know. What do they call those?

Mignon: They used to have them in neighborhoods even when we were children.

Mignon: And he ran those through the South. Evidently was very well off and my grandmother had divorced him and so my mother finished high school in Chicago before she went back, you know, to Memphis. The story behind that really was that my Grandmother was born about a year before Lincoln freed the slaves and she was the daughter of the plantation owner. My great-grandparents were slaves in Virginia.

Margaret: Where in Virginia?

Mignon: I don’t know where in Virginia. When the Civil War… when Lincoln freed the slaves, the man who owned the plantation called my great grandmother and her husband, her black husband, to the house and said, my great grandmother’s name was Sally, “Sally, you and Armor are free. You may do whatever you want. You may stay here and work on the plantation or you may leave but you are not taking Vicki with you because she is my child and I intend to keep her. So they left Virginia under the cover of night and took my grandmother and took her to Memphis.

She was well educated. They sent her to Oberlin to school and she taught school in Memphis and she married my mother’s father, whose name was Owen. And that’s all I know about him because he was dead when I was born.

Margaret: But he lived in Memphis?

Margaret: And then by Mr. Mausby she had two children?

Mignon: She had more then two. The others died. Because I was named for one of those.

Margaret: I was going to ask you that. How did you get that beautiful name, Mignon?

Mignon: Well, she… my grandmother named one of her daughters Mignon and my mother named me that for her half sister who died when she was quite young.

Margaret: So now where did your mother and father meet?

Margaret: And how did that come about? Have you any idea?

Mignon: Yes. My father was from Montgomery but he went to Tuskegee to School. And he became a protégé of Dr. George Washington Carver and he wanted to go to business school so Dr. Carver made arrangements for him to get a job at Iowa State University to go to the business school for a year.

Margaret: I never knew that.

Mignon: As a matter of fact, my father was very disappointed when I was born that I wasn’t a boy because I was to be named George Washington Carver. (Laughter.)

At any rate, Daddy went to Iowa and stayed the year. He did not graduate because he thought he had made an A in one course and they gave him a B and he would not accept the diploma. But he left there and his older sister lived in what was then Indian Territory before it became the State of Oklahoma.

Margaret: Which sister was that? Susan?

Mignon: Not Annie, Susie, his oldest sister Susie who was married and living there. And his occupation was to….he had a mule that he rode and sold Bibles to the Indians. And in his last illness we were sitting… there used to be a program on television (Oh dear my, cut it off I don’t want you to hear that.) He would look at this town and say “My goodness, the people who did these sets certainly knew what they were doing because it looked exactly like that town because he had traveled throughout the West.

He came back and went to Mississippi and worked for a man who had a grocery store. A general store, and he used to go to Memphis to buy for the store and in those days he had just come from the West and he wore his hair like Buffalo Bill, long and cut short and they used to tease my mother about her boyfriend with the curls. But anyway, this is how she met him because he went to Memphis to buy for the store.

Margaret: And what did she do? What was she doing then?

Mignon: Just living with my grandmother. She didn’t do anything.

Margaret: Where did she go to school?

Mignon: And she became a milliner. Then she decided to go back to Memphis and she didn’t have to work.

Margaret: Now they married in Memphis?