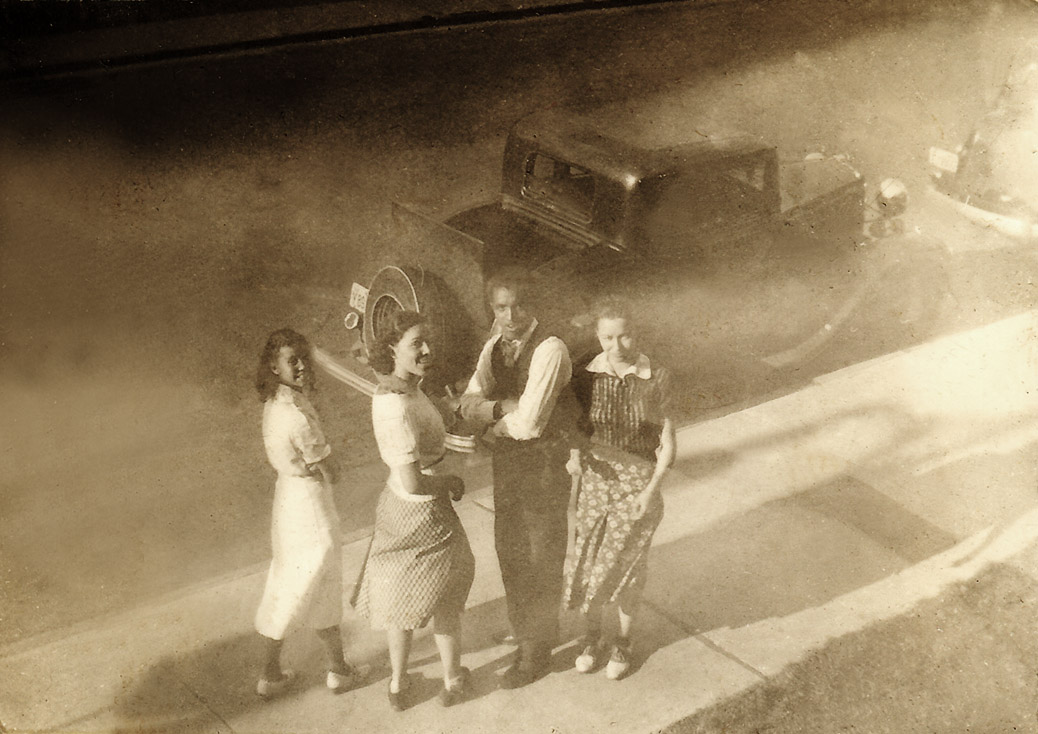 I don’t know who the young woman on the left is, next is my mother, Doris Graham, my uncle Hugh Cleage and my aunt Mary V. Graham. Taken in 1940 in Detroit, Michigan. Photographer not known.

Jacob Cleage was my grandfather Albert Cleage’s oldest brother.  He and his wife, Gertrude, lived at 5670 Hartford Avenue, very close to my grandfather’s Cleage Clinic.  The house is no longer there, but there are 3 houses on either side of the spot where it stood   and it appears that all were built from the same plan.

5670 probably looked like this house that hasn’t been renovated or sided. I think their house would have been painted and kept up.  They owned the house and it was worth $1,900 according to the 1940 census.

There were six people in the household. Everybody was identified as Negro and had been living at the same address in 1935.

According to the census  Jacob Cleage was the head of the house. He was 62 years old and had been born in Florida. He worked as a sweeper in an auto plant with 2 years of high school.  He earned $1,200 in 1935.

Gertrude Cleage, 58, wife, born in West Virginia. She was not working outside the home and had completed 3 years of high school.

John Cleage, 29, son (SON?? first I heard of Jacob having any children), born in West Virginia. He worked in the stock room of an auto factory and earned  $1,600 during 1935. He had 4 years of college and was attending college in 1940. He was married and his wife were seperated.

Jacob Cleage, jr, 24 son (ANOTHER SON???) also born in West Virginia. Not working with 3 years of college and attending college in 1940. He was single.

Robert Evans, 22, lodger, born in Alabama. He had attended school that year and had 2 years of high school. He wasn’t working and had earned no money. He was married.

Countess Evans, 22, wife of a lodger born in Alabama. Shw had 4 years of college, was not working and had earned no money. Countess spoke to the enumerator which probably accounts for the incorrect information.

Jacob Cleage was actually born in Tennessee and Gertrude was born in North Carolina. I never heard that they had any children and I’ve followed them down through the years from the 1880 census and other records and through family stories and photographs. My grandparents lived with them when my father was born in 1911. I can’t find Jacob Jr. or John Cleage any place else, not living apart with a different mother and not in any directories.   If all of these young people were living there in 1935, the lodgers would have been 17. Jacob Jr. would have been 19 and John would have been 24. That would have been a house full of students for one working man to support.  Jacob Cleage died in 1942, just two years later.

I wish Jacob or Gertrude had been the informant because I’ve got to take much of this with a grain of salt until more information comes my way.

Minnie Reed Mullins was my grandmother, Pearl Reed Cleage’s sister.  James and Minnie Mullins were the parents of 12 children. At the time of the 1940 census only the youngest 3 – William, Harold and John – were still at home. Minnie was the informant. The house they rented for $20 a month at 4345 Tireman is no longer there. Here is a shot from Google Maps looking down the street from the now vacant lot.

In the 1960s I sometimes walked down Tireman on my way to school. At that time the houses were still there. They were a mix of brick and frame two family and single family houses.  My uncle Henry talked about riding his bike down Tireman and out into the country when he was a boy.   The one time my sister and I tried it, we ended up in Dearborn and were called “nigger” by some white teenage boys.  But that is not today’s story.

James Mullins was listed as 75 years old and had not worked during the past year.  He and wife Minnie both had 8 years of school.  She was born in Kentucky and he was listed as born in New York.  I don’t know if Minnie was joking with the enumerator or trying to give them false information on purpose or if it was a misunderstanding.   He was actually born in Georgia according to all the other documents I have. Well, except for the 1930 census where his race was “Indian”, his place of birth was “Cherokee” and Minnie was identified as “white”.  In 1940 everybody living in the household was identified as “Negro”.

Harold was 24 years old. He was born in Indiana and had completed 4 years of high school. During 1939 he worked 52 weeks and earned $936 as a stock boy at a clothing store.

John was 18 years old, born in Michigan and had completed 3 years of high school. He was attending school so he was probably a senior at Northwestern High School. I know that John was also a musician and probably played during this time.

Just looking through other information I have collected for the Mullins family has shown me I need to plan another post where I pull it all together.

In 1940 my grandparents and family were living at 6429 Scotten at the corner of Moore Place. They owned the house and it was worth $5,000. They had lived in the same place in 1935 and in fact had been there for over 20 years as all the girls in the family were born in that house.  My grandfather was a medical doctor in private practice at the Cleage Clinic.  The amount of money he made in 1939 was a crossed out number, replaced with “0”. He was the informant, that is he is the one that talked to the census taker and gave them the information on the form.

All of the children were in school. Anna was still attending Northwestern High school. Gladys had graduated in 1939 and was a freshman at Wayne State University. Henry, Hugh and Barbara must have been at Wayne. Louis graduated from Wayne State medical school in 1940 and was doing a residency at Homer Philips in St. Louis. My father graduated from Wayne in 1938 and was in the seminary at Oberlin College.

I hadn’t realized that one of my grandmother sisters and all of my grandfather’s living siblings lived within walking distance of their house.  I have labeled their houses, Northwestern High School, Wingert Elementary School and the Cleage Clinic.  I sort of knew this, but I didn’t realize it until I mapped it out after finding everybody in the same neighborhood.  In future posts I will share what I learned about each household in 1940. 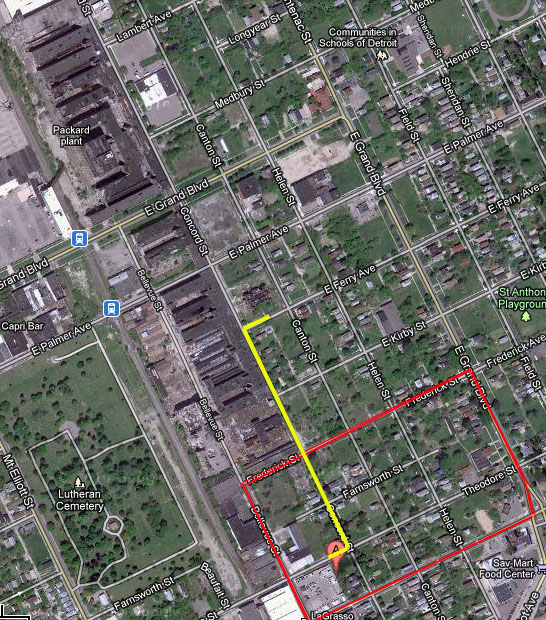 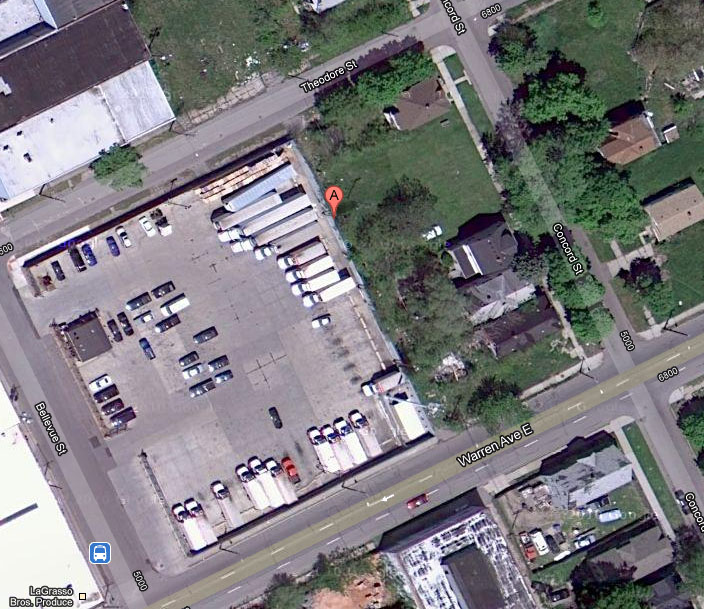 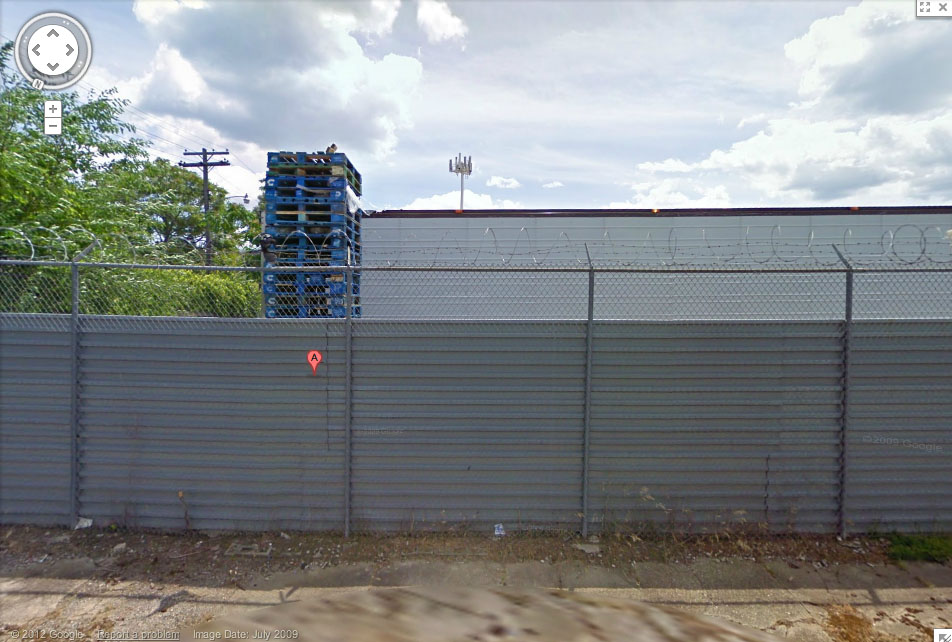 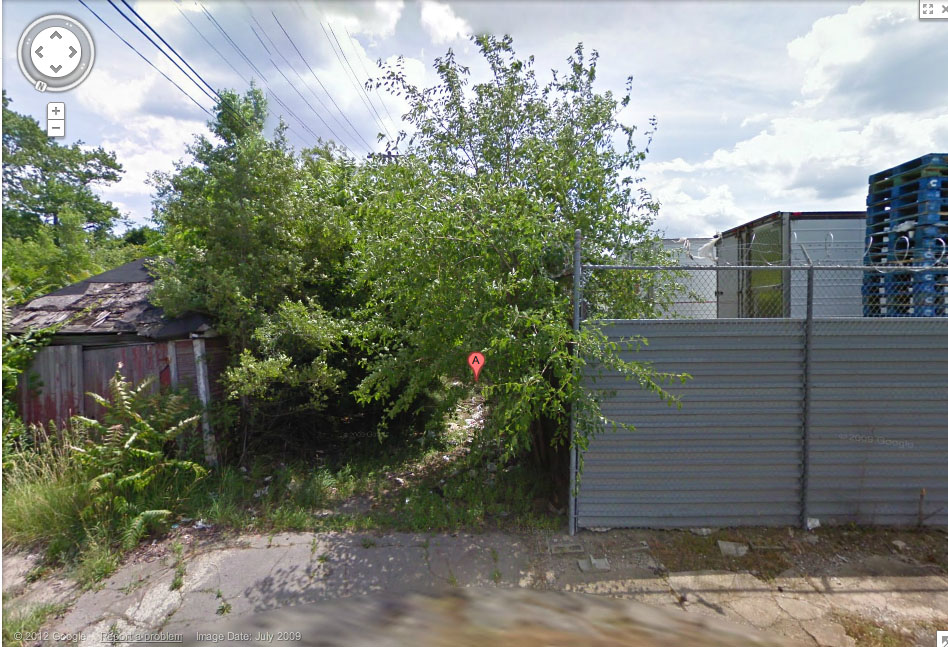 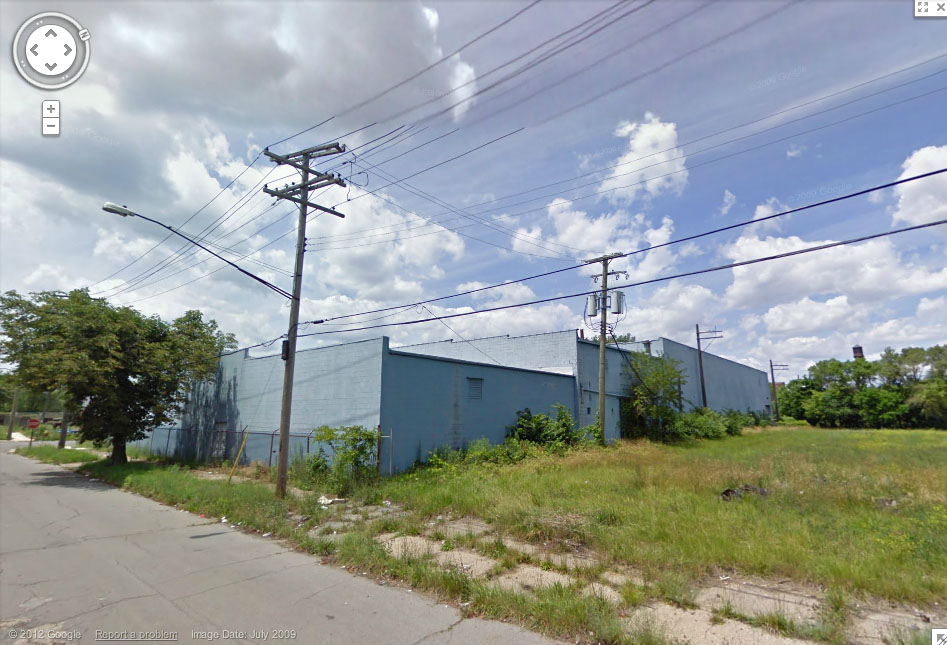 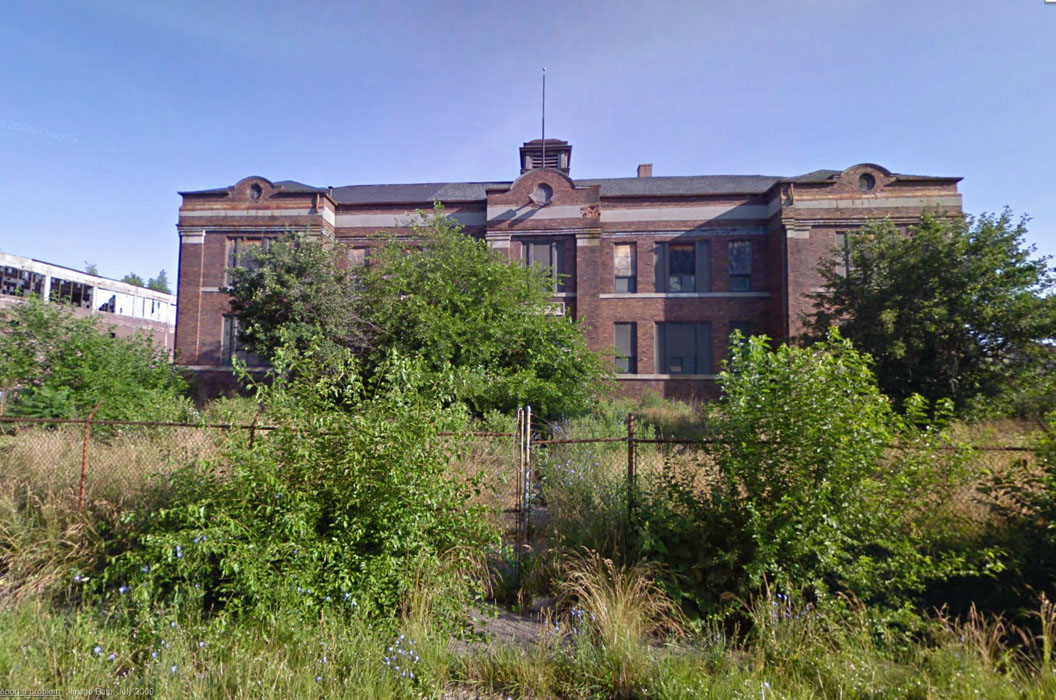 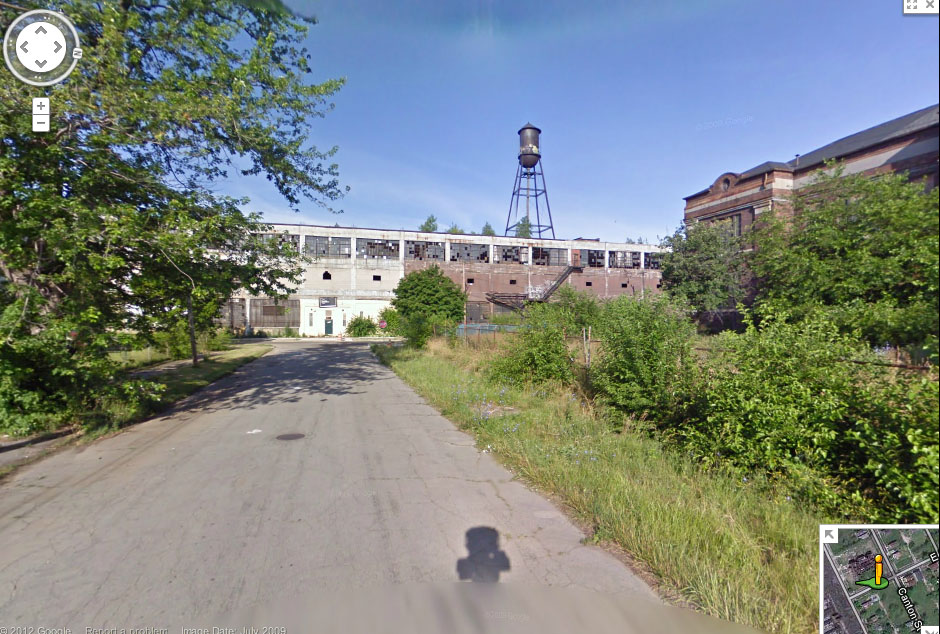 The 1940 census was released yesterday. Today I was able to find both sets of grandparents, with my parents still living at home, the only great grandparent still alive, three families of cousins  and my in-laws who were married and living in their own home with the first of their twelve children, baby Maxine. Today I am going to write about my mother’s family, the Grahams.

My grandparents were enumerated on April 12, 1940.  They lived, as I expected, at 6638 Theodore Street in Detroit. The entire enumeration district was white with the exception of my grandparents and their next door neighbors, the Jordans.  Just noticed my grandparents and family were enumerated as “white”. Among the adults over 40 was a mix of naturalized citizens from Italy, Poland, Canada, Switzerland, England, Germany and natural born citizens from the southern United states. There were a few people who had filed their first papers towards gaining citizenship and a few “aliens”. The younger adults and  the children were almost all born in Michigan. The majority of people in the district had lived in the same place since 1935.  Among the workers on my grandparents page were  a janitor, two maids, a laborer at a spring factory, a bender at an auto plant,  a checker at a dress shop, a grinder at an auto factory, a delivery man for a print shop, a stock clerk at an auto factory, a stenographer, a time keeper at a machine shop, a manager for a coal and ice concern and a salesman for a radio concern.

My grandmother, Fannie, was the informant for her family. She and Mershell were both 50. He had completed 8th grade. She and 20 year old daughter, Mary V., had completed 4 years of high school. My mother, Doris was 17 and had completed 4 years of high school and was attending college.  Mershell had worked 52 weeks as a stock clerk at an auto factory and earned $1,720 during 1939. Mary V. was working as a stenographer at a newspaper office and had earned nothing in 1939. They owned their own home which was worth $3,500 and had lived in the same house in 1935.

Above Doris and Mary V. in front of Plymouth Congregational Church.

Did I learn anything new from this census? This was the first time I looked at the whole enumeration district which gave me more of an overview of the neighborhood. I did not know that my grandfather completed 8th grade. I always heard he taught himself to read because he never attended school.  I wonder which is true, did he teach himself to read and my grandmother just said he completed 8th grade or did he go to school.  No big surprises, mostly seeing in the record what I already knew.

For more information about the Grahams, their enumeration district and photographs of what the area looks like now Supplemental material about the neighborhood.  A photo of my mother, aunt and uncle – Bird’s Eye View, 1940 photograph.  My grandmother’s mother and sisters – 1940 Census – Jennie Virginia Turner.  A map of where my family lived in Detroit during the 1940 Census – Where We Lived.  My grandmother Fannie’s 1940 Journal Entries. My mother at Wayne State University in 1940.