While reading about Dr. Turner, who I talked about in Part 2 of this 3 part series, I became interested in the story of his wife, Leota Henson Turner and her uncle, Frederick J. Loudin.  Frederick Loudin, although not a student at Fisk, became a member of the original Fisk Jubilee Singers. They toured the United States and Europe singing Spirituals and other songs that came down from slavery, to raise money for Fisk College.  When the tour ended and the Fisk singers were disbanded, Loudin decided to keep the group together as the Loudin Jubilee Singers and under his direction they went on a six year tour of Australia, New Zealand, India, Burma, Japan and sang before the crowned heads of Europe. (Aside – My father used to tell us that he danced before the crowned heads of Europe so I like writing that.  He was joking.).  Loudin’s niece, Leota Henson trained for two years in Germany as a pianist. She later joined the group and toured with them as their pianist.  There are a lot of articles about the tour out there and they received almost universal acclaim with full houses and bravos everywhere. She kept a detailed diary of the trip and wrote a series of articles for The Gazette after her return.

There is a lot more to tell about Loudin –  how his ancestors were enslaved in the north and free by 1850, how he became a printer but could get no business, how he went to Pennsylvania where he met his wife Harriett.  I could talk about the time the group sang spirituals in the Taj Mahal. I could write about the relative lack of discrimination the singers faced everywhere else in the world and the overabundance of it they found in the USA. I could tell about his invention of the key chain and how for a short period of time he owned a shoe factory in Ravenna, Ohio. However, I am going to tell only one more story, which ties into my family.

While reading the book “Out of Sight – The Rise of African American Popular Music 1889 – 1895”, I came across the following passage on page 77 describing Frederick and Harriett Loudin’s home in Ravenna, Ohio.

“Facing one as they enter the beautiful stained glass door of the house, stands a clock similar in size and form to the grandfather’s clock of ye olden time, which is made of teak wood and was brought by Mr. Loudin from Burma.  It was made in Rangoon at the government prison..by a Burma convict.  The wood is almost as heavy as iron, and resembles the polished face of dark granite.  A year and a half was requird to make it…The clock stands eight feet in height and is one mass of bas-relief, gods, dragons and various monsters…”

As I read it, I realized that I had heard this story before, it was one my Aunt Barbara Cleage Martin had told me several years ago about a clock that  stood in my Cleage Grandparent’s dining room for as long as I could remember and which now stands in my cousin’s home. When I turned the page, there was a photograph of the very same clock!

At my Aunt’s 90th birthday party, I asked her how we came to have this clock in the family.  She told me that Dr. Turner’s wife had been a pianist who played all over the world. While traveling in Burma, they bought this clock. When the Turners were leaving Detroit they asked my Uncle Louis to keep the clock for them.

Other posts in this series:

Another post about Cousin Ernest – What Is Ernest Doing Now?

Other posts about Cousin Warren – Warren’s Christmas Birthday Party,   Warren Evens, Then and Now, A Silhouette of Cousin Warren

This is the 14th post in the February Photo Collage Festival, and the fourth post of six that will answer the question someone asked when I posted this photograph (follow the link to see it) – What happened to these kids?  Today is the turn of my cousin Ernest Cleage Martin.

Ernest graduated from Michigan State University College of Osteopathic Medicine in 1986.  He had his residency training of Psychiatry at Wayne State University – Detroit Medical Center and Psychiatry at Detroit Psychiatric Institute. Today he  practices Psychiatry, in Anderson, South Carolina with a specialization in Forensic Psychiatry.  When I learned he was practicing Forensic Psychiatry I wondered how he analyzed dead people.  Of course that wasn’t what he was doing. It means that he specializing in psychiatry as it relates to the criminal justice system. 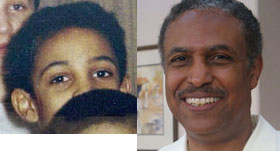 If someone had asked me at that birthday party in 1958 if Ernest would become a doctor, I would have thought they were kidding.  He thought everything was funny, including the kid down the block falling off of his bike. His grades weren’t very good. Sometime during his college career he became friends with someone who made him part of their study group and he learned how to study. At the same time he must have realized that there was a point to it and here he is today, a successful doctor. Following in the footsteps of our uncle Louis and grandfather Cleage. You just never know how life will turn out.  Ernest is still practicing today.  He and his wife have raised two fabulous children and he still has that sense of humor.