While trying to identify the people in the hat photo, I looked through my stash and found more photographs with some of the same people. They might have been taken at the same time, but might not have. Several other people were also included. On the back of one was written “Dr. Turner”. 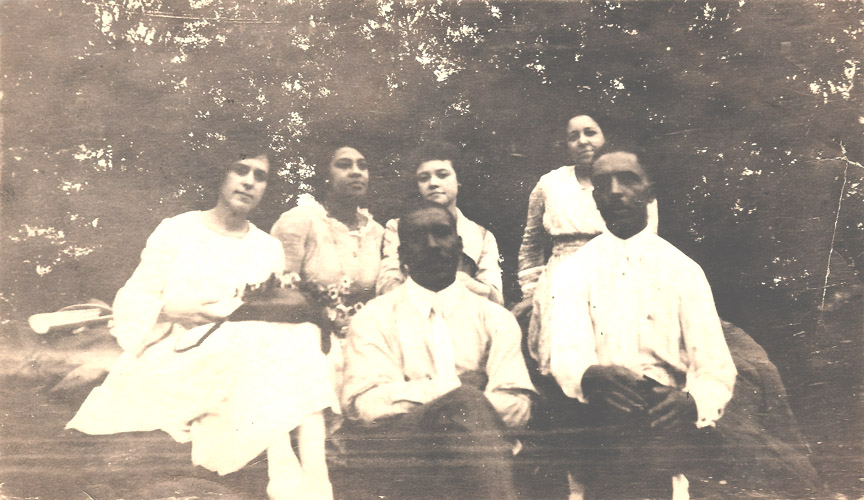 I wrote this earlier post which mentions Dr. Turner, “Births, Deaths, Doctors and Detroit – part 2“.  It was about the doctors that delivered three of my grandmother Fannie Graham’s babies and was with her two sons when they died.  So, I figured that I KNEW Dr. Turner but I decided to look some more anyway. And I thought maybe the lady in the polka dot hat was his wife.  Using Ancestry.com, FamilySearch.org, google maps, books and search along with newspaper articles found at GenealogyBank.com I was able to put together the following picture of Dr. Alexander Turner. And I did find his wife but it wasn’t the woman in the polka dot hat.

The “Michigan Manual of Freedmen’s Progress” published in 1915 to”celebrate 50 years of freedom for the former Negro slaves of this nation…” had this to say,

“Turner, Alexander L., M.D., 1042 W. Warren, Detroit.  Born in Georgia.  Graduate of the medical department of the University of Michigan.  Started his practice in Detroit, 1910 and became highly successful in the treatment of diseases peculiar to women and children.  Dr. Turner is also a Pharmacist and is the proprietor of two drugstores in the city of Detroit.”

In the 1900 census Alexander L. Turner was a 16 year old boarder living in Ravenna, Ohio.  The head of the household was Frederick Loudin who was 64 years old, occupation listed as “Showman”. The others making up the household were:  Wife, Harriett, age 54. No children. No occupation. Sister, Adeline Henson 54, widowed with one child and occupation housekeeper. Niece, Leota Henson 33, single with no children, occupation Musician. Alexander’s occupation was “at school.”

Alexander graduated from the Ravenna high school in 1904 and then attended Buchtel College in Acron, Ohio. An article in The Gazette, a black newspaper out of Cincinnati, Ohio, ran a short article about Turner’s graduation it read.

Alexander Turner was made a graduation present of fifty dollars in gold by F.J. Loudin and wife.  Alexander came here from the south a few years ago.  He worked at the Loudin home and went to school.  He proved to be one of the brightest students that ever attended the Ravenna schools and he was a faithful worker for the Loudins.  For his faithfulness he received the reward mentioned above on Tuesday.

The commencement exercises of the high school were held recently in the First Congregational church (white) and Alexander Leigh Turner, one of the few Afro-American graduates who has completed the courses and received a diploma from the schools, fairly thrilled his hearers by his oration on “The Negro and His Progress” forcible and eloquently delivered.”

Later Alexander took the name “Loudin” as his middle name.  I can only suppose it was in honor of the Frederick J. Loudin.  This story ran on July 2, 1904. On November 3 of the same year Frederick J. Loudin died.  His wife, Harriett, died later that same year.

In April of 1905 while a student at Buchtel College Turner and Harry Proctor sued the Ravenna Rollar Rink Co. under the Ohio Civil Rights Law for refusing to allow them to skate after selling them tickets for skating. They won the suit.

In 1912 Turner graduated and the family moved to Detroit where he began to practice medicine. On his WW1 draft registration card he is described as 5 ft. 8 inches, slender with brown eyes and black hair.  He lived at 1042 Warren Ave. West and practiced at 287 Saint Antoine St. down the block from Dr. Gambles office. All these places are long gone, urban renewed decades ago.

In 1918 Turner was one of the founders of Dunbar Hospital where he was the chief of surgery.  You can read more about the founding of Dunbar in the post mentioned earlier,  “Births, Deaths, Doctors and Detroit – part 2”. In that post I also described what the Turner’s suffered when they attempted to move into a house on Spokene Ave, into a white community on Detroit’s west side.  At that time some white men forced their way into the house, put a gun to Turner’s head and demanded he sign the house over to them. He did.  He and his wife and mother-in-law, were escorted out of the house, their furniture was packed in a van by the mob and in a hail of thrown objects that shattered the windshield, they drove back to their house on W. Warren where they resumed life.  Can you imagine the rage, the shame and the helplessness they must have felt as they drove away from that house? I don’t have the address of the house on Spokene, but here is a photograph from google maps that shows houses in that area today. 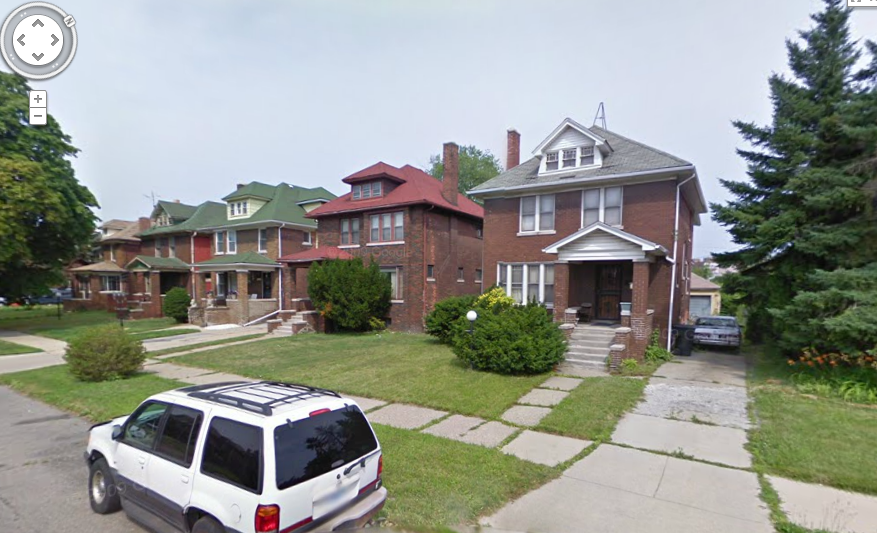 All of this happened not very far from  the Cleages house on Scotten (which was in a black neighborhood), from my grandfather’s Cleage Clinic on Lovett and Mcgraw, the high school my father and his siblings  attended and even closer to 5397 Oregon where my family lived in the 1960’s.  I’ve marked the places on the map below. 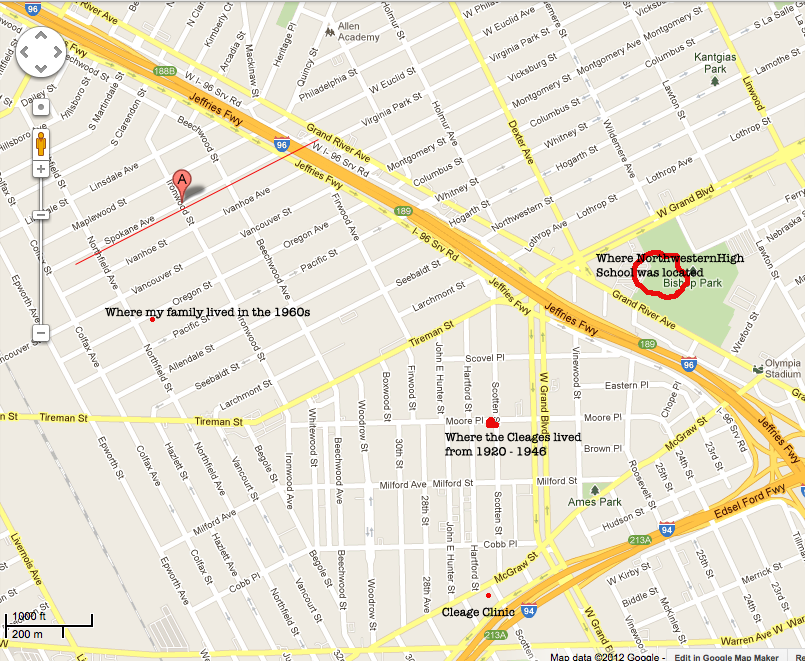 The gazette in Cleveland ran a lengthy article on July 11, 1925 in which they talk about the incident and also a short item supporting the Turners.  I will just include the short item. 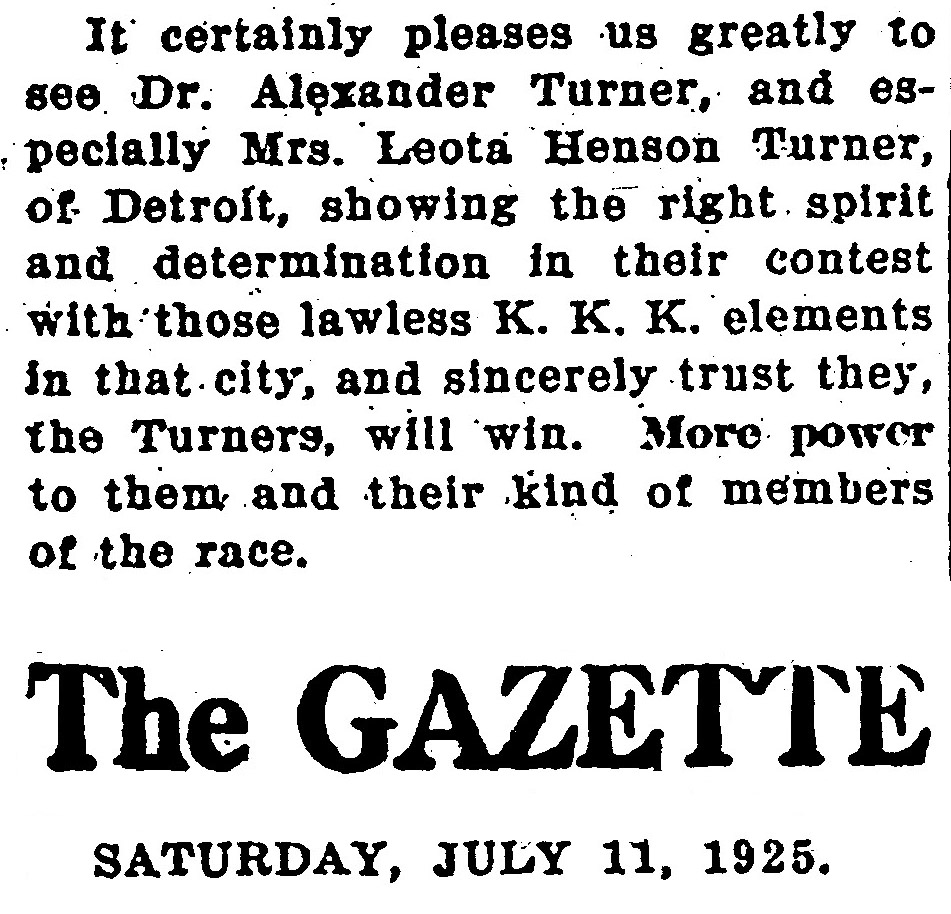 I did not find anything else about the suit so I can’t report if they won any damages or not.  Perhaps they were most pleased with Leota Turner because it was reported that she didn’t want her husband to sign the papers, even though he had a gun to his head. It is said some thought him cowardly for doing so.

In June of 1943 Detroit experienced a race riot. Thirty-four people died during that week.  A year later Dr. Turner and his wife returned to Ravenna, Ohio where he died of a heart attack at 11pm on August 12.  he was 61 years old. His father was listed as Alfred Turner and his mother as Lucy, maiden name unknown.  Dr. Alexander Loudin Turner was buried in Maple Grove Cemetery in Ravenna, Ohio, on August 15.  Leota Turner was the informant on the death certificate.  She lived until 1955.  I will tell her story and that of her uncle Frederick Loudin in part 3, which will fit nicely with the Sepia Saturday theme of the theater.