This post is about my relationship to the Cleages of Athens, Tennessee. Kristin Cleage (that is me) was born free in Springfield, Mass. in 1946. My only sister was born when I was 2. My family moved back to Detroit when I was four. I finished high school and graduated with a degree in fine arts from Wayne State University.  I worked as a pre-school teacher, a doll maker and a librarian. Eventually I married James Williams, who had an Associates Degree and worked as an organizer and an inspector of asphalt for the Michigan Dept of Transportation. We had six children. All of our children attended college, lived to be adults and most now have children of their own. At various  times we have shared our home with children and grandchildren, and other relatives. We owned a variety of homes over the years, some with and some free from mortage.  We often lived around extended family.  I was the third generation of my Cleages born out of slavery. 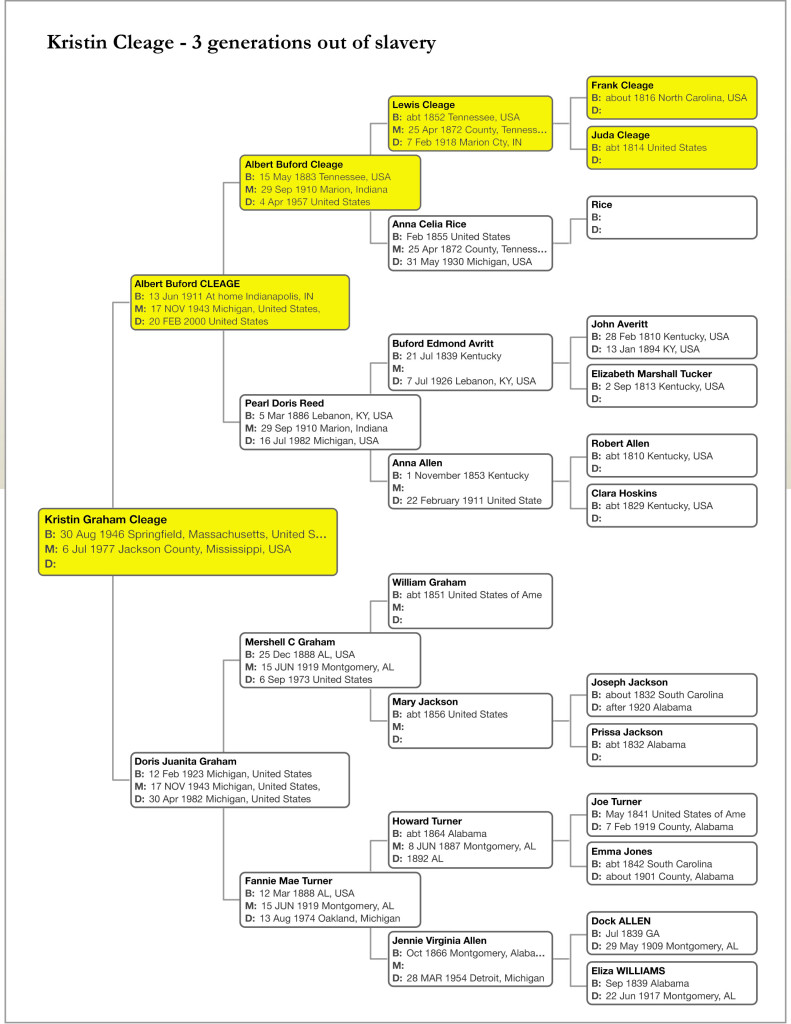 My father, Rev. Albert B. Cleage Jr (aka Jaramogi Abebe Agyeman) was born free in Indianapolis, Indiana in 1911 to parents born in Tennessee and Kentucky. His family moved to Kalamazoo, Michigan and eventually Detroit.  He had six siblings.  All of them lived to be at least eighty years old. He attended public schools in Detroit and graduated with a BA from Wayne State University, followed by a Divinity Degree at Oberlin College and doing post degree work in film at the University of Southern California.  He married my mother, Doris Graham and they had two daughters. Both daughters lived to be adults, graduated from college and had seven children between them. My father pastored churches in Lexington, KY; San Francisco, CA; Springfield, MA and Detroit, MI. He was active in politics and with friends and family, published newsletter, advocated self determination and black power for black people. He founded the Shrines of the Black Madonna with churches in Detroit, Atlanta and Houston. He died at the age of 88 in 2000 in South Carolina.   He was the second generation born out of slavery.

My grandfather, Dr. Albert B. Cleage Sr, was born free in Hackberry, Loudon County, TN in 1883.  He was the youngest of 5 children born to Lewis Cleage and Celia Rice.  Eventually the family moved back to Athens, TN and his parents were divorced.  He and his siblings all graduated from high school.  Several attended college. My grandfather graduated from Knoxville College in Knoxville, TN and the University of Indiana medical school, Indianapolis, IN. He married my grandmother, Pearl Reed and they had seven children who all lived to age 80 or beyond.  After completing his internship, the family moved to Kalamazoo, MI. There he set up his medical practice.  After several years they moved to Detroit, Michigan where he opened Cleage Clinic and practiced medicine.  Three  of his siblings and his mother eventually moved to Detroit.  One brother remained in Athens. My grandfather regularly traveled back to visit. During his life, my grandfather helped found three churches and two black hospitals.  This was in the days when black doctors could not practice in most white hospitals.  In the 1950s my grandfather retired and in 1957 he died in Detroit.  He was the first generation born out of slavery.

My greatgrandfather Lewis Cleage was born into slavery on Alexander Cleage’s plantation in McMinn County, about 1852.  He was fourteen when freedom came with the end of the Civil War.  He married Celia Rice in 1872 in Athens, TN and they had five children. They all lived to adulthood and attended high school and/or college.  He worked as a farmer, in the steel mills, on the railroad and did other hard labor all of his life. He never learned to read or write.  He died in 1918 in Indianapolis, Indiana. He lived free for 52 of his 66 years.

My 2X great grandfather Frank Cleage was born into slavery about 1816 in North Carolina. I do not know how he came to be on Samuel Cleage’s plantation, but he was there by 1834 when he was mentioned in the letter to the overseer.  My 2X great grandmother Juda Cleage, was born into slavery about 1814. She  came to Alexander Cleage’s plantation with his wife, Jemima Hurst.  Juda was mentioned in both Elijah Hurst’s and Alexander Cleage’s Wills.  Frank and Juda both gained their freedom after the Civil War and were legally married that same year.  They had at least eight children.  Frank worked as a laborer.  I have not found them after the 1870 census.  I can only trace 3 of their children so I am unable to give death ages.  The three children I have found all did hard physical labor and were unable to read and write, as were Frank and Juda.

You can read more about each person by following the links or putting a name in the search box in the right hand column.

I recently received this obituary for my great grandfather Louis Cleage.  I noticed several things.  First, he was not taken to Athens for burial.  He is buried in an unmarked grave in Crown Hill Cemetery in Indianapolis pictured here.  He lived in Indianapolis for two years before his death.  And I wondered, who was Rev. John Brice?  Had he been pastor at Witherspoon United Presbyterian, the Cleages church?  Was he from their hometown, Athens, Tennessee?  Here is what I learned.

John Brice was born in 1878 in Knox County Tennessee the 7th of the nine children of Hampton and Harriett Brice.  Exceptional for these times they owned their own land. Although they were illiterate, all of their children attended school and learned to read and write.  John attended Knoxville College Normal, graduating in 1899.  He finished the Baccalaureate program in 1904 and graduated from Knoxville Seminary in 1909. He met his wife Ella Hawkins there.  My grandfather, Albert B. Cleage Sr. attended Knoxville College during this same time, graduating in 1906.

In 1910 Rev. John Brice was pastor of First United Presbyterian Church in Athens, Tennessee.  He roomed one house over from my great grandmother Celia Rice Cleage Sherman and her family, which included her second husband Roger Sherman (who is listed as an architect for First United Presbyterian Church), son Edward and his wife and two children, along with eight year old grandson Richard.  My grandfather, his two other brothers and his sister and her family were already living in Indianapolis, Indiana.

Brice wasn’t pastor in Athens very long. By 1912 he was married and pastor of Witherspoon United Presbyterian Church in Indianapolis, Indiana.  My grandparents and my grandfather’s brothers were some of the founders of Witherspoon. Brice’s three youngest children were born in Indianapolis.

He served as a chaplain in France during WW 1. Following the war he taught and pastored in Alcoa, Tennessee.  Alcoa was a company town set up by Alcoa Aluminum.  They used cheap southern labor, black and white.  When things fell apart as far as the vision that some of the professional black people on staff had hoped to implement, Brice moved to North Carolina to teach and work at the Palmer Memorial Institute, founded and run by his wife’s niece, Charlotte Hawkins.

Rev. Brice died around 1960. A long time family friend and DNA relative has alerted me to John Brice’s death certificate on Ancestry.com. It also turns out that my dna cousin is related to John Brice’s grandson, Guion Stewart Bluford Jr.

Of his four children, three had careers in music.  The youngest, Carol Brice had a career in opera.  Johnathan and Eugene often accompanied her on the piano and also had careers of their own. Daughter Lolita Brice was an educator and married engineer Guion Stewart Bluford Sr.  Their youngest son was Guion Stewart Bluford Jr, who was the first black astronaut, in spite of his high school counselor in the 1960s advising him to take up a trade because he wasn’t college material.

I hadn’t planned yesterday to go to Family Search and look for the Will of Alexander Cleage, but I did.

“I give and devise to my beloved wife Jemima Cleage for and during her natural life the following described Negro slaves – to wit: … Juda and her five children  to wit: Charles, Angelen, Lewis, Laura and Frank… I also give and bequeath to her for her natural life a negro man called Frank the husband of Juda…”

Juda and Frank Cleage were my two times great grandparents. Their son Lewis Cleage was my great grandfather, my own grandfather Albert B. Cleage’s, father. I have several other documents that trace them through slavery – a letter to the overseer in 1838 and a bill of sale that mention Frank in 1852, a marriage record for Frank and Juda Cleage in 1866 and the 1870 census, Lewis’ death certificate in 1918.

These records give me a bare bones outline of their lives. I have no photographs, no stories. Nobody’s memories. These bones and their names. I read the will over and over until I felt it inside of me. I saw my cousins faces, my children’s faces.  All descended from these two people – Frank and Juda Cleage and their son, Lewis Cleage. I wish I could see their faces. I wish I knew their stories. I wish someone had shared memories.  One thing I know is that I will tell the parts of their stories that I can piece together and I will say their names. Frank Cleage born 1816 in North Carolina. Juda Cleage born 1814 in Tennessee. Lewis Cleage born 1852 in Athens Tennessee and died 1918 in Indianapolis, Indiana.