I finally was able to see a copy of my great grandmother, Anna Celia Rice Cleage Sherman’s death certificate.  I had been searching for it for years, not realizing that her first name was “Anna”. It doesn’t have her parent’s names or tell where in Athens, Tennessee she is buried.  What it did was to tell me when and where she died and to verify some of the information I already have.

My grandfather, Albert B. Cleage Sr was the informant, he provided the information.  I thought his close friend, Dr. P.B. Gamble signed, but the initials are wrong.

She died on May 31, 1930 of Cerebral Apoplexy, a stroke, which she suffered on May 28, 1930.  That would have made my Aunt Anna 6 years old, the age she told me she was when she saw her grandmother suffer a stroke while sitting at their kitchen table.

Great grandmother Anna Celia married Roger Sherman in Athens, Tennessee  on April 25, 1897.  He was 51 and she was 42.  He was a carpenter and worked for himself.  It was the second marriage for both of them. His 4 children were all grown and living on their own. She had 5 children. In 1900 the oldest daughter, Josie was married with two children and was sharing the house with Roger and Celia Sherman, as were three of her younger brothers (Henry, Edward and Albert) who were all students.  Jake, the 2nd oldest, had been working in Knoxville as a waiter for several years.

Celia and Roger Sherman were living together in the 1910 Census, but by the time of the 1920 Census, Mr. Sherman was living with his daughter, Mamie Sherman Kennedy, in Winston Salem, NC.  Later that same year he died.  His body was also shipped back to Athens for burial in an unnamed cemetery.

Anna Celia lived in Athens with her son Charles Edward and his family in 1920.  In 1924 he died. She moved to Detroit where her other three sons lived.  In 1930 she is enumerated with my grandfather and his family.  Several months later, she died.

On the death certificate, my grandfather says that he doesn’t know when she was born but guesses her to be about 65.  He was 47 at this time.  His oldest sister was 57.  If their mother was 65, she would have been 8 when her daughter was born.  She was old enough when Freedom came to remember her life on the Rice plantation where she was born. If only she could have written it all down.  In the 5 censuses I find her, the date of birth is given as “about 1855”.  She was closer to 75 than 65 when she died.  He says that she was born in Tennessee. The information on the census records are split between Virginia and Tennessee.  All agree her mother was born in Virginia.

In my minds eye, I see a large stone grave marker in Hammonds Cemetery that said “Sherman”.  I did not go up to it, just saw it across the grass. When I get back to Athens, I am going to go look at that marker and see if it has any other information on it.  Not to mention looking at every other stone there. 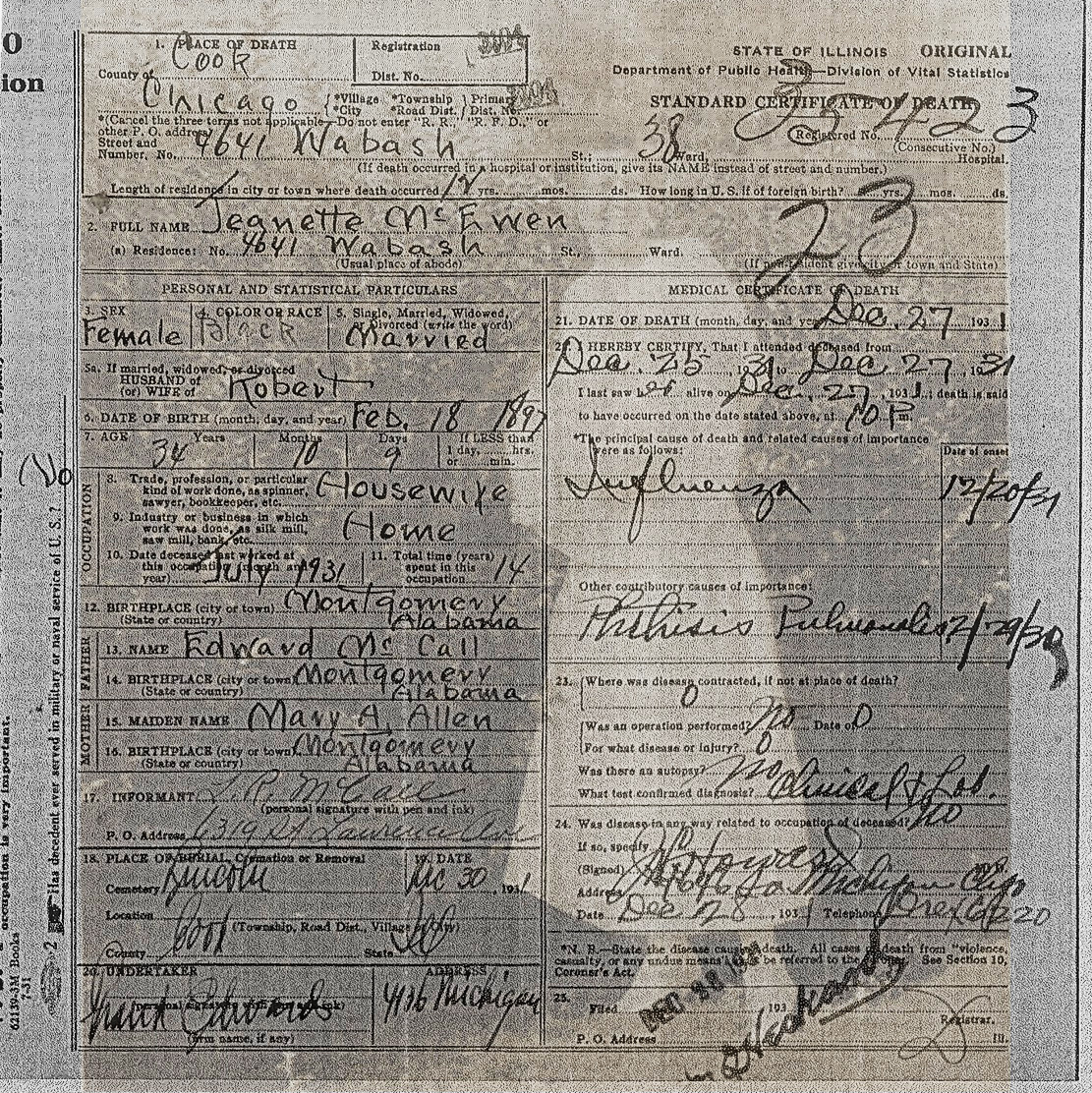 I have been looking for my great grandmother’s, Celia Rice Cleage Sherman, death record for years.  I need to do a post just about that search but today I’m going to write about the death records and burial information I have found for most of the other Cleages I was looking for Here is my list for now.

Louis Cleage – my great grandfather – Born about 1852 in McMinn County, TN. Died 7 February 1918 in Indianapolis, IN and was buried in Crown Hill Cemetery on 9 February 1918. The informant was his son, Jacob Cleage.
Celia Rice Cleage Sherman – missing

Their children and their spouses:
Josephine Cleage Cleage – born abt 1873 in Louden County, TN. Died 1956 in Detroit and buried in Detroit Memorial Park Cemetery on 26 July 1956.  The informant was Lucille Cleage Watkins, her daughter.
Husband James Cleage – born abt 1870 in McMinn County, TN. Died early October in Indianapolis, IN. Burial date was October 12, 1933 in New Crown Cemetery in Indianapolis, IN. Information from New Crown Cemetery. 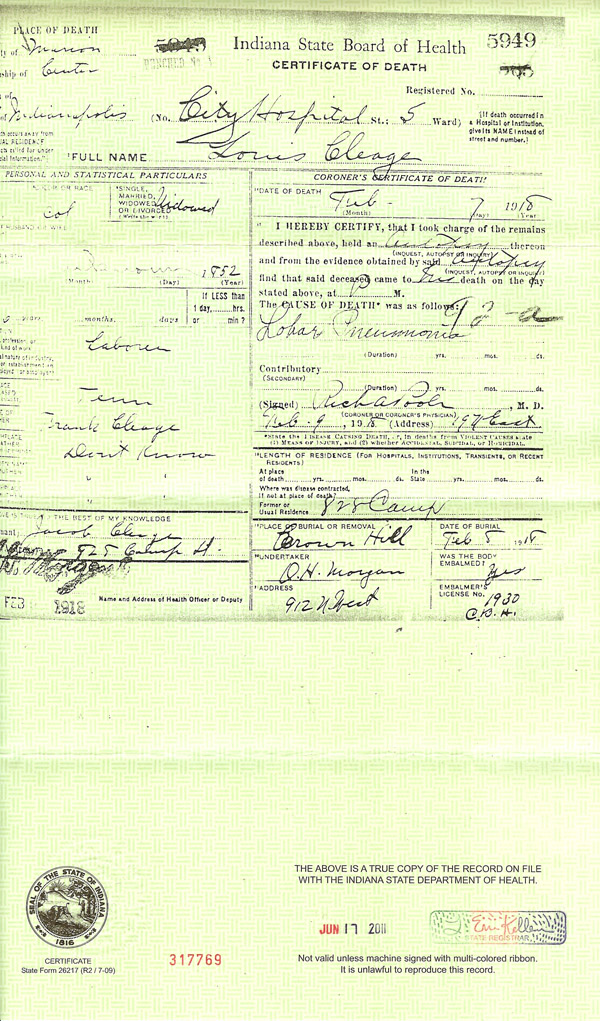 I recently found out that my Great Grandfather Louis Cleage died in Indianapolis, Indiana in 1918 through a listing for Crown Hill Cemetery.  I previously found him listed in the 1918 Indianapolis City Directory living son Jacob Cleage.

The death certificate says he died in Marion County, Indianapolis, Center Township at City Hospital and his full name is Louis Cleage.  He was Colored and widowed.  He was born in 1852 in Tennessee.  He was a laborer.  According to the informant, his son Jacob Cleage, Louis’ father’s name was Frank. Mother’s name unknown.

What new information did I learn or have confirmed from this death certificate?  I found that his father’s name was Frank Cleage.  In the 1870 US Census Louis Cleage, born around 1852, was living with an older adult named Frank Cleage in Athens, TN.  I assumed that Frank was Louis’ father, but relationships were not noted in the 1870 US Census.

Today I am transcribing my Grandfather, Mershell C. Graham’s funeral program.  I’ve been looking for my grandfather’s funeral program for several months.  It wasn’t in the binder, where it should have been, or in the box with the not yet filed funeral programs.  Today, while looking for something else, I found it.  It was in my file cabinet in a folder having nothing to do with anything relevant.  The poem was written by my sister, Pearl Cleage.

Mershell C. Graham was born December 25, 1887, in Coosada Station, Alabama.  He received his early Christian training in the First Congregational Church of Montgomery, Alabama.  He met his beloved wife, Fannie Mae, in the church.  They celebrated their 54th wedding anniversary in June of this year.  They had four children and shared a long and beautiful life.

He was one of the founders of Plymouth United Church of Christ and was a devoted member of the church all of his life.  He served as treasurer for many years and was Trustee Emeritus.  He was retired from the Ford Motor Company after over thirty years of service and was a member of the U.A.W. and the N.A.A.C.P.

He was preceded in death by his two sons, Mershell C. Graham Jr and Howard A. Graham. 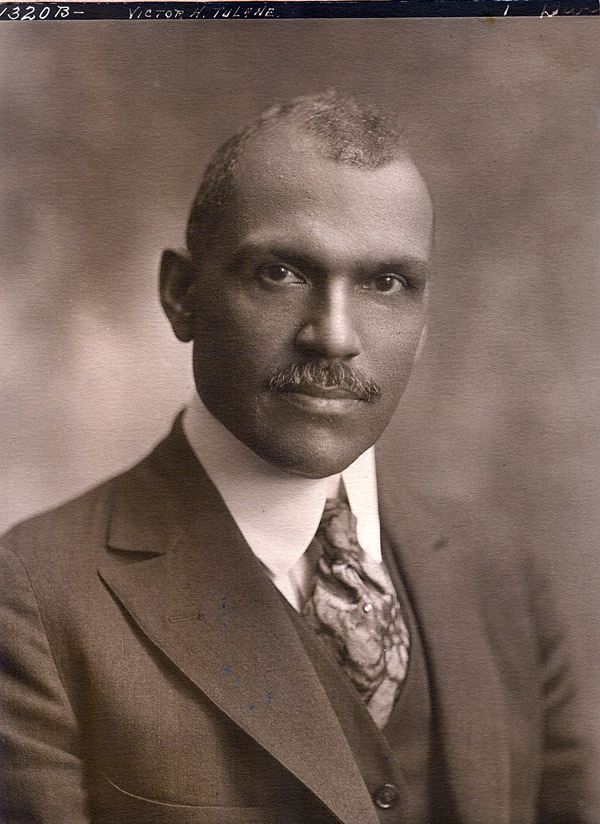 Victor H. Tulane, a leader of his Race here for many years, died at his home, 430 S. Union St., at the age of 57.  His rise to affluence, through his own industry and native shrewdness, was little short of remarkable.  Prior to his death he owned a mercantile business and operated a real estate agency of considerable scope.

Tulane first came to Montgomery when he was 15 years, old having walked here from Wetumpka, where he was born.  His first job was porter in a saloon, but later he opened a store at the corner of High and Ripley Sts. which he operated for about thirty years.  He later rented his store and entered the real estate business, and before his death had accumulated a comfortable estate.

For many years Tulane served on the board of trustees of the Tuskegee Institute.  He was also chairman of the board of trustees of the Hale infirmary.  He was widely known for his generosity and willingness to serve in charitable movement.  He was actively connected with the community chest and was one of the first to donate toward the Y.M.C.A. building for white (sic.) persons.

Surviving are his widow, Willie L. Tulane of Montgomery, and his daughter, Naomie Tulane Vincent, New York city.  Funeral arrangements will be announced later by the Loveless Undertaking company.

More about this branch of the family to come.  Victor’s wife, Willie Lee Allen Tulane, was one of Eliza’s daughters.

So much for wordless….
After posting this I decided to go look for Jacob Graham at Family Search. I used the pilot program and found a death record for Jacob Graham who died June 30, 1913 at the Salvation Army Fresh Air Camp. I googled the Fresh Air Camp and found several photographs in the Alabama Archives about Fresh Air camps the Salvation army ran in Montgomery for Old men and others for poor women and children. I also found a google book “By Alabama. Dept. of Archives and History”, Thomas McAdory Owen, an entry that mentioned under the section Benevolent Insititutions in Alabama, that the Salvation army had a Fresh Air Camp on the upper Wetumpka Road, founded in 1911 conducted by the Montgomery Anti-Tuberculosis League for tubercular cases.( Alabama official and statistical register.) I’m sending for the death certificate.