Tulani, Ayanna and James , soon after we started homeschooling.  Tulani was 11, Ayanna was 13 and James was 7 when we began. This is the story as I wrote it for a newsletter I once published. Click on the pages below to enlarge.

While looking through old copies of The Illustrated News for something completely unrelated, I came across this advertisment for Vicki’s Bar-B-Que.  I noticed the oven and immediately thought of the Sepia Saturday prompt for this week.  I decided to google Vicki’s and see if there were any photographs or other ads from the past.  Imagine my surprise when I found that the restaurant is still operating and that the same family still owns it!

Although I do not remember ever eating at Vicki’s or tasting their sauce,  I was able to find a family member who has been to the restaurant recently and she said, “Yes. Vicki’s is still there. Some people love it! I’m not a fan but I’ve only been there once. Maybe it was a bad day. They have the kind of bbq that is grilled meat and then you dip it on the sauce instead of grilling and caramelizing the sauce while grilling.”

You can see an interview with the present owner, the oldest son of the original family, and photos of the food and building, plus reviews of the present food and service at this link Vicki’s Yelp Page.  The link to the video is just under the photos of the restaurant at the top of the page. 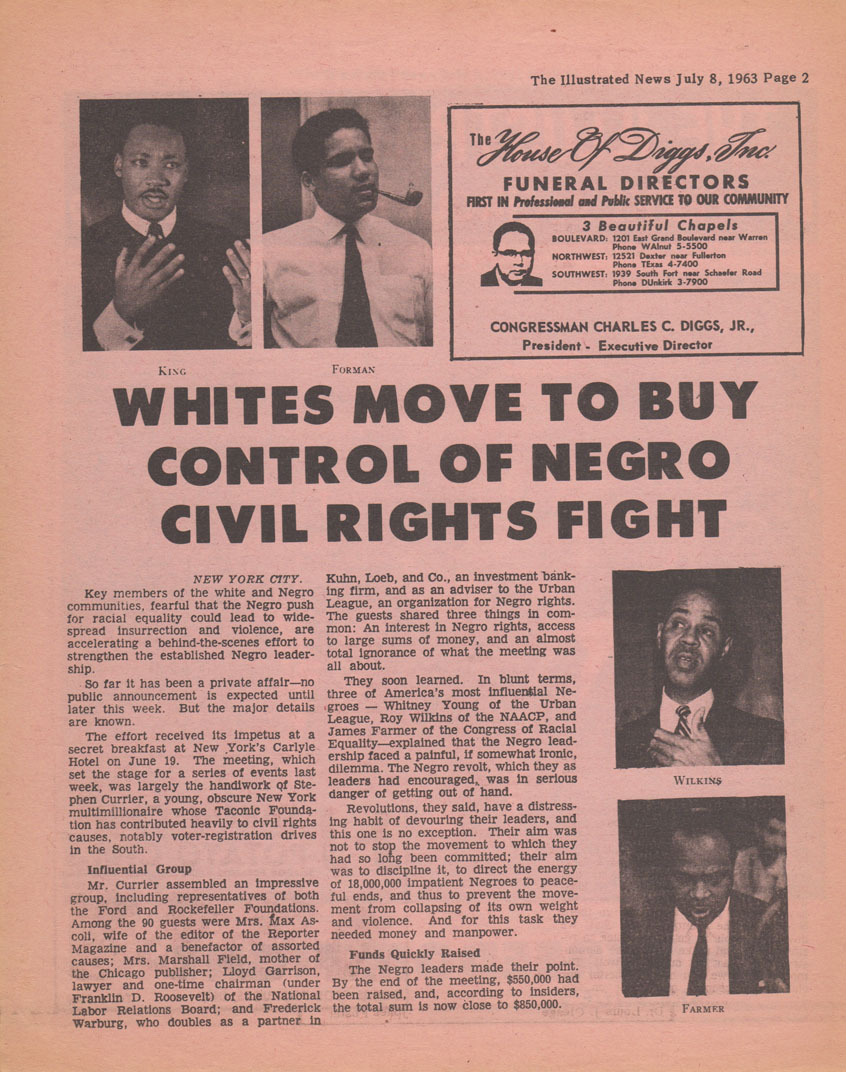 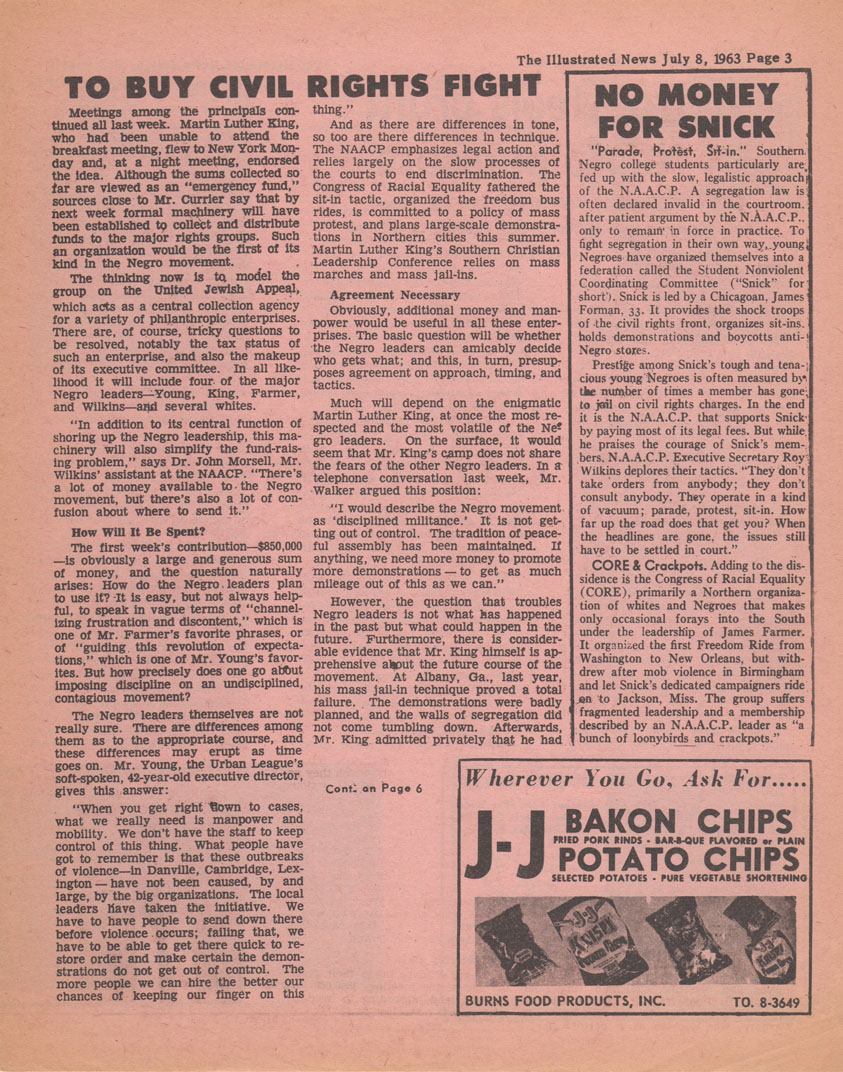 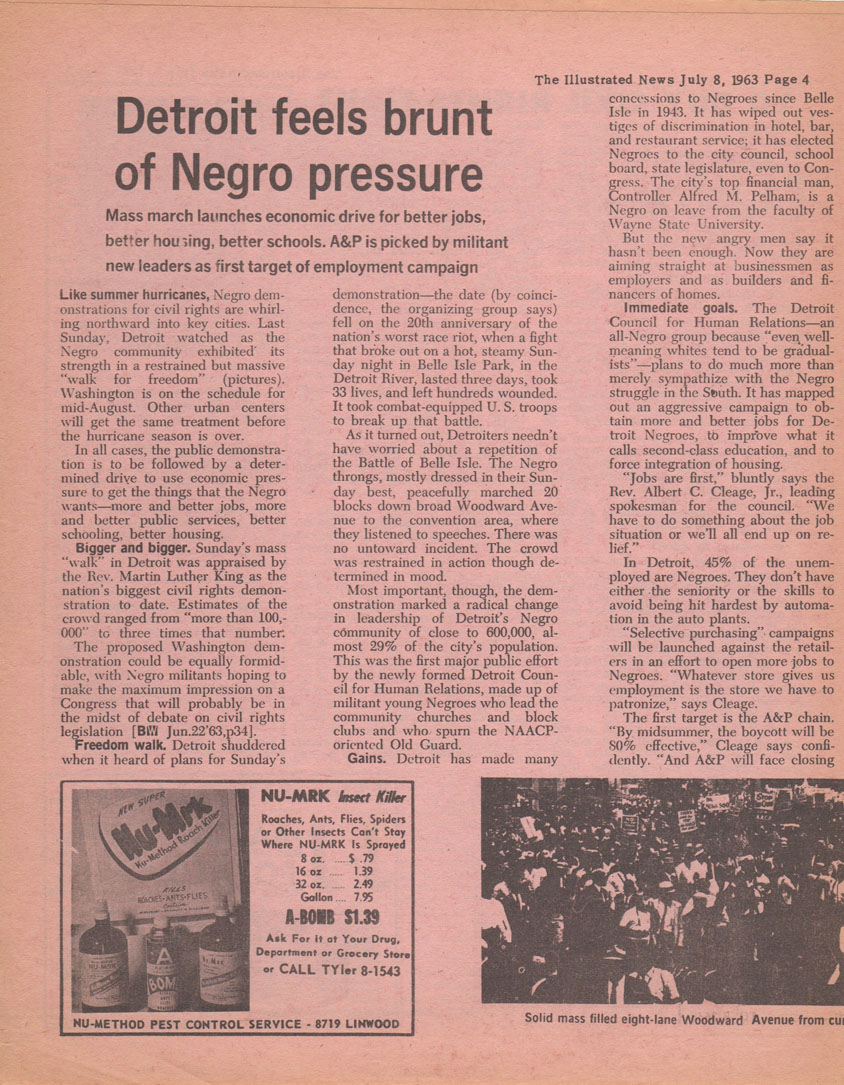 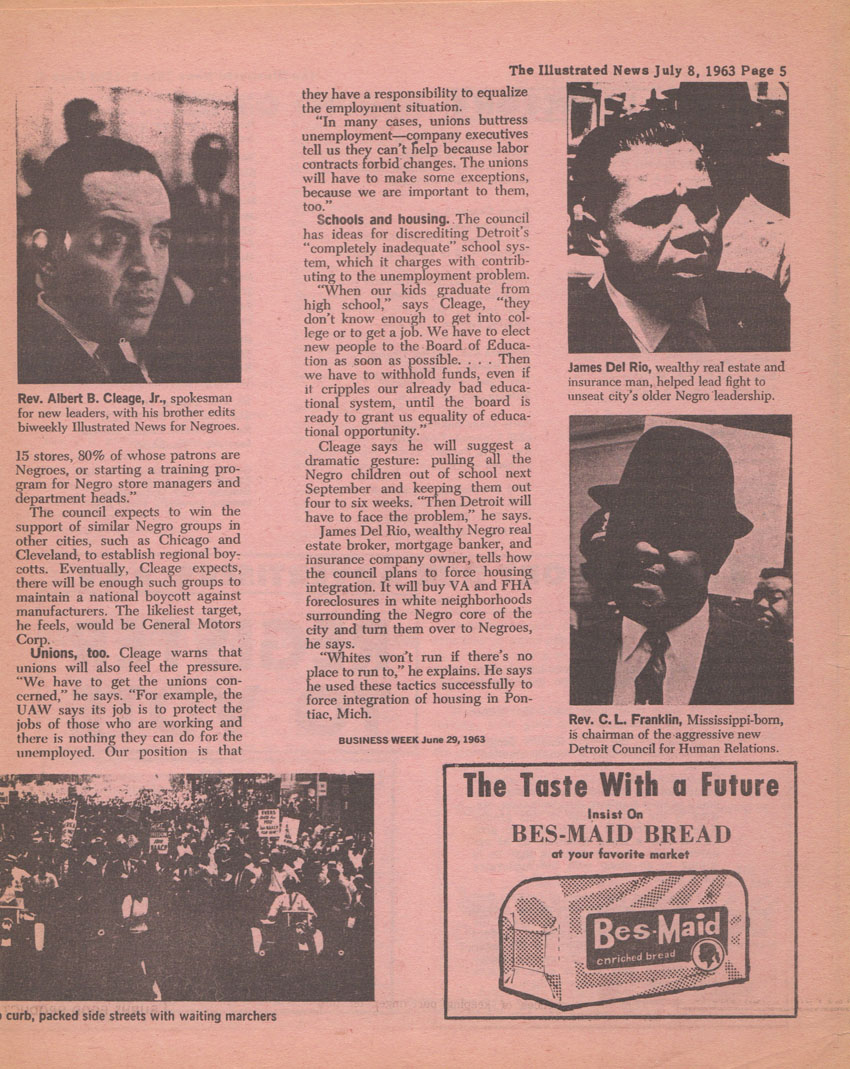 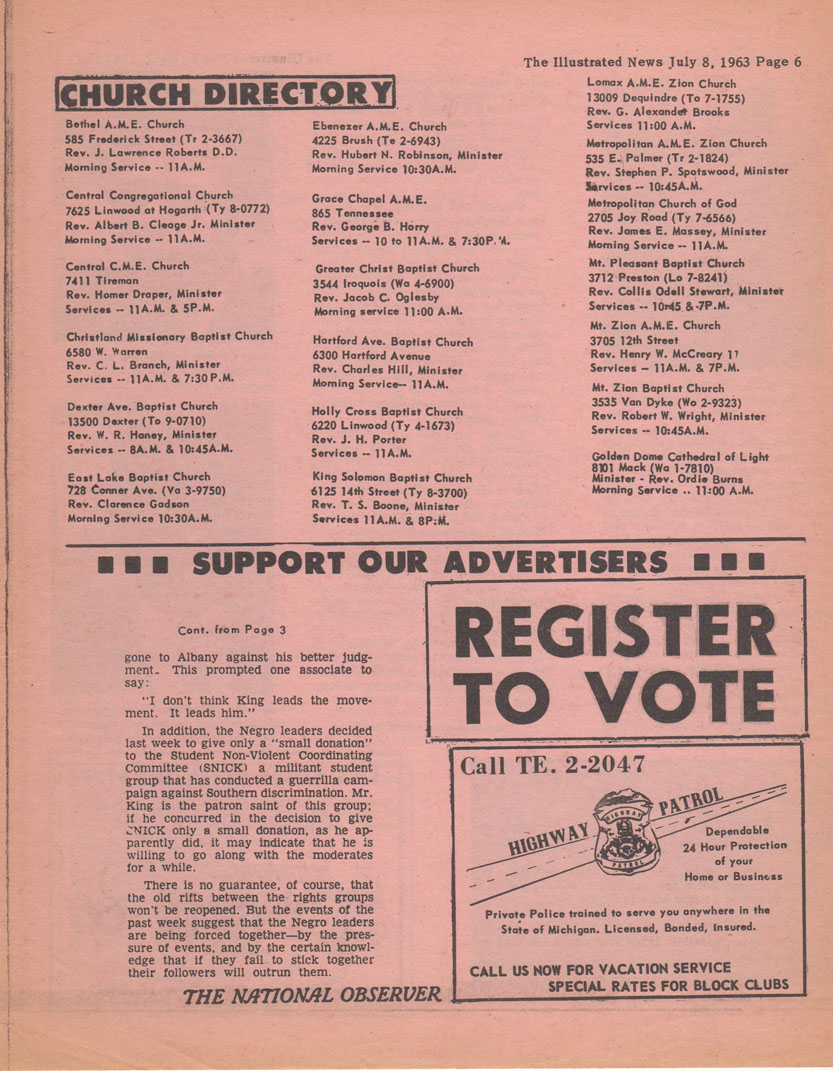 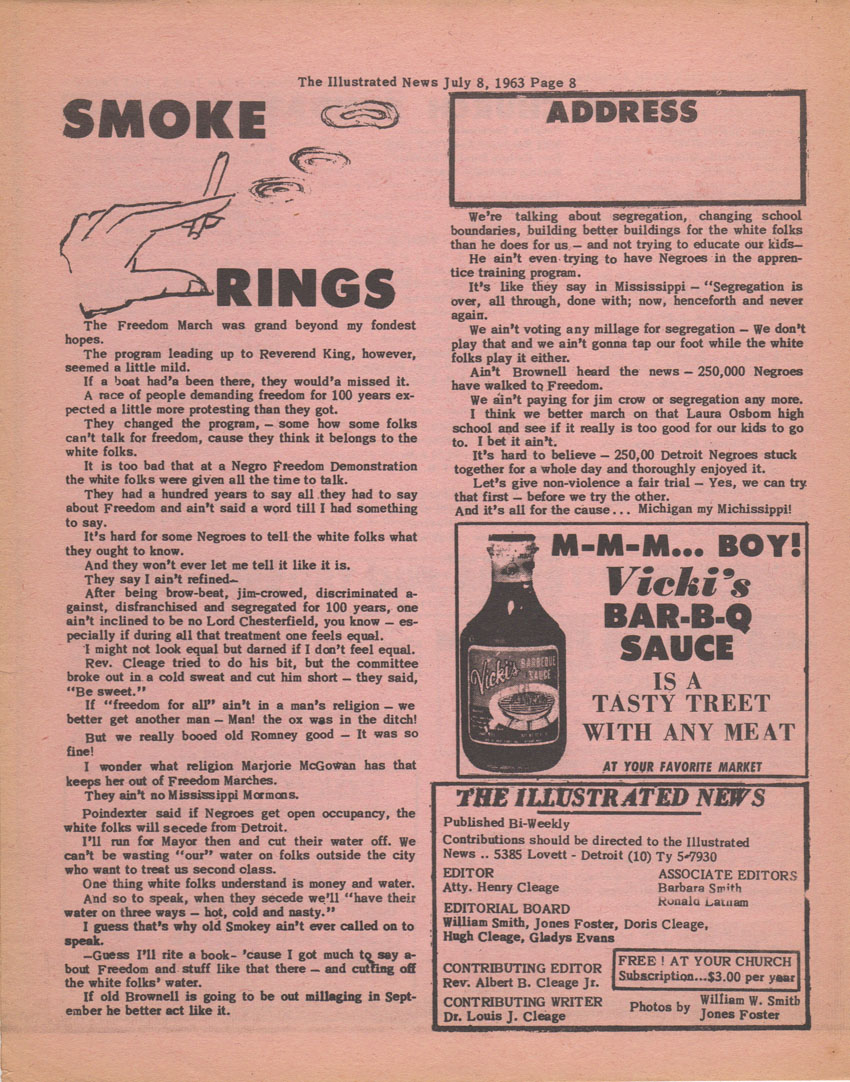 Police brutality was a problem in 1963, as it is today. Today I am sharing an issue of the Illustrated News that covered a demonstration held in front of the Detroit police station, then at 1300 Beaubien.  The protest was against the killing of Cynthia Scott, an unarmed woman.  She was shot in the back. The demonstration was peaceful and there was no interference by the police. The article says there were 2,500 people at the protest.  Also “We wonder if a grand jury investigation might not clear the air and throw some light upon the police brutality practiced on Negroes and why such shootings never come to trial.”  And that is something people are still wondering today.  There was no investigation and the officer was not charged. Click on all pages to enlarge enough to read them. 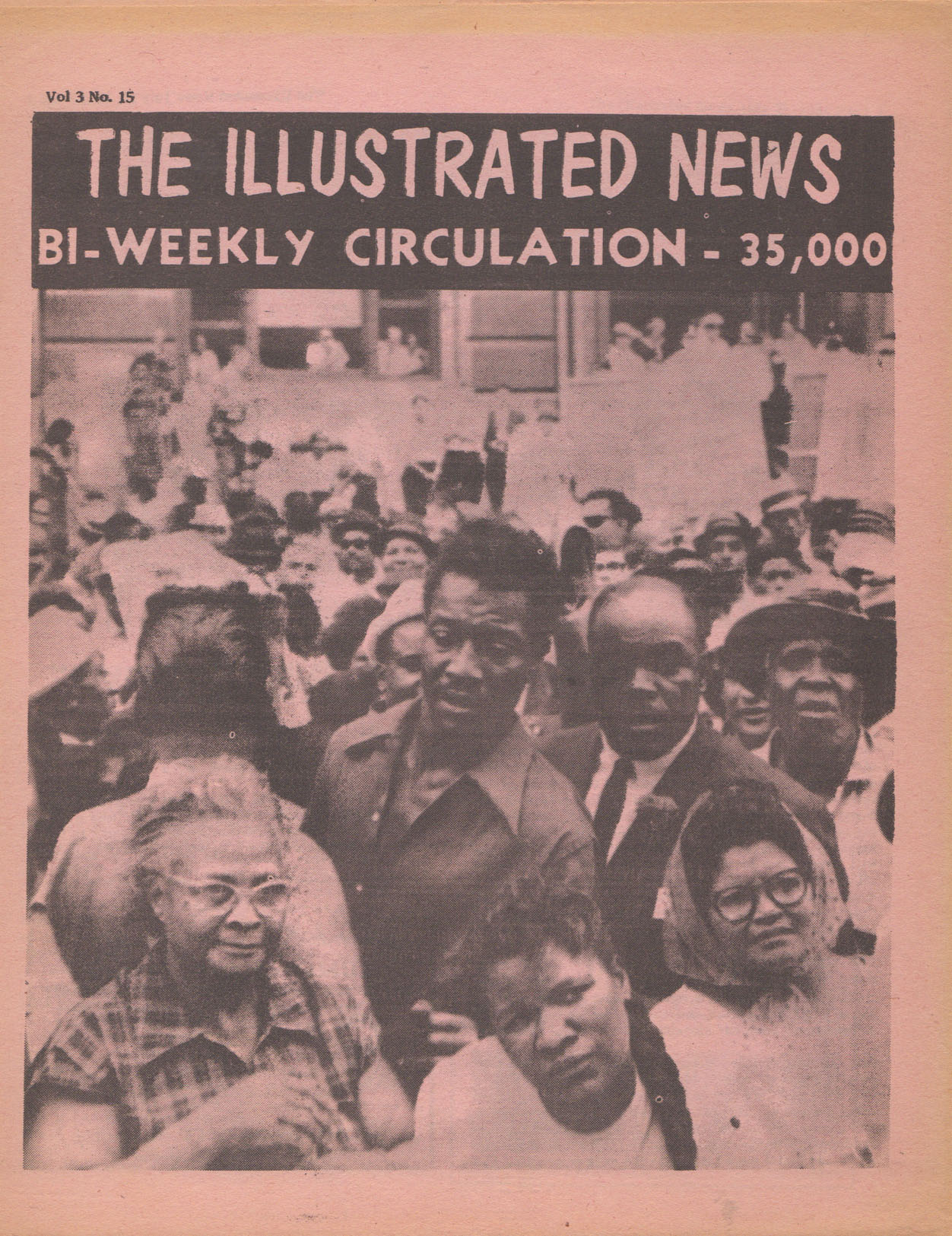 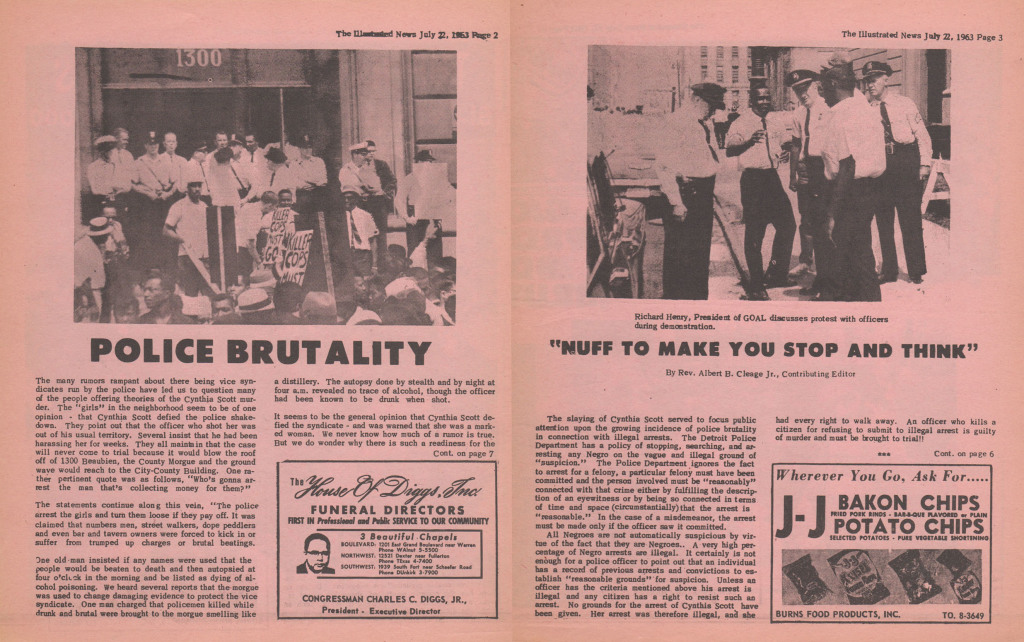 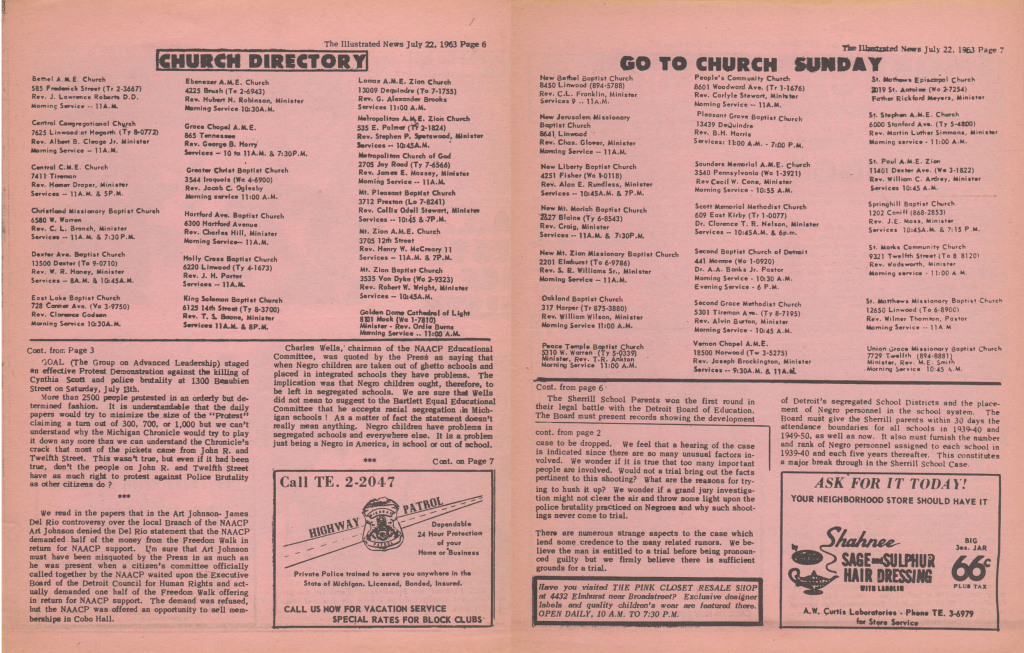 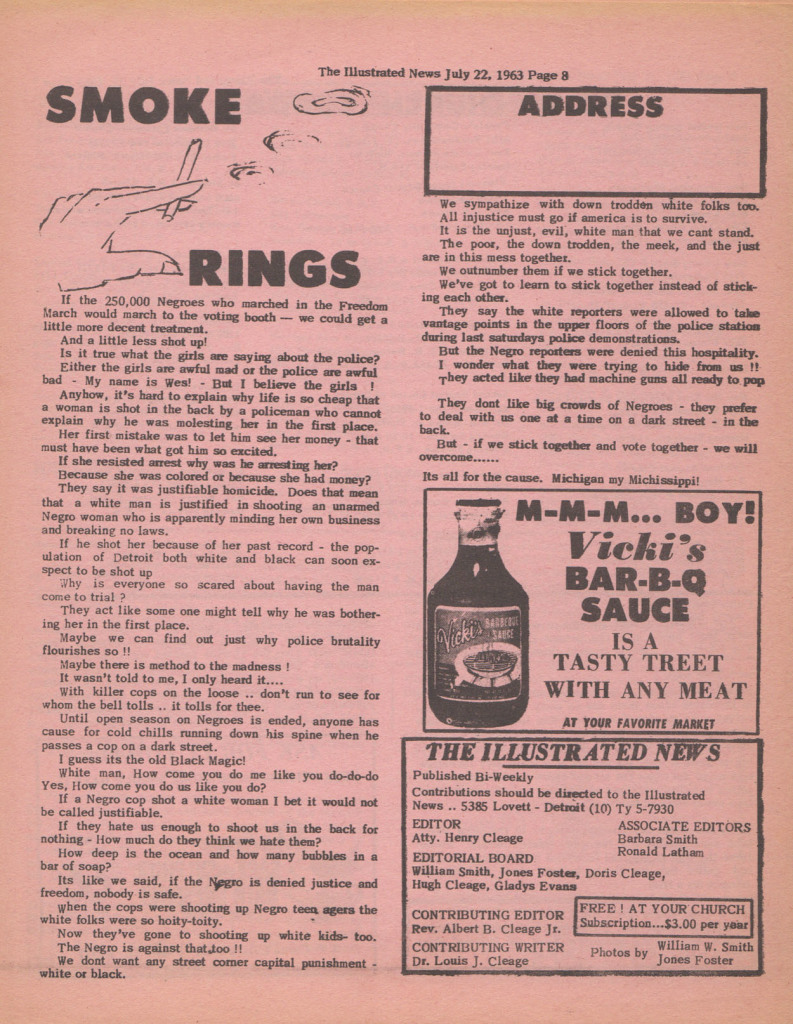 It was 1956 and my mother, sister, grandfather and I were on our way to a few weeks out of Detroit at my Uncle Louis’ cottage in Idlewild. Click all images to enlarge. 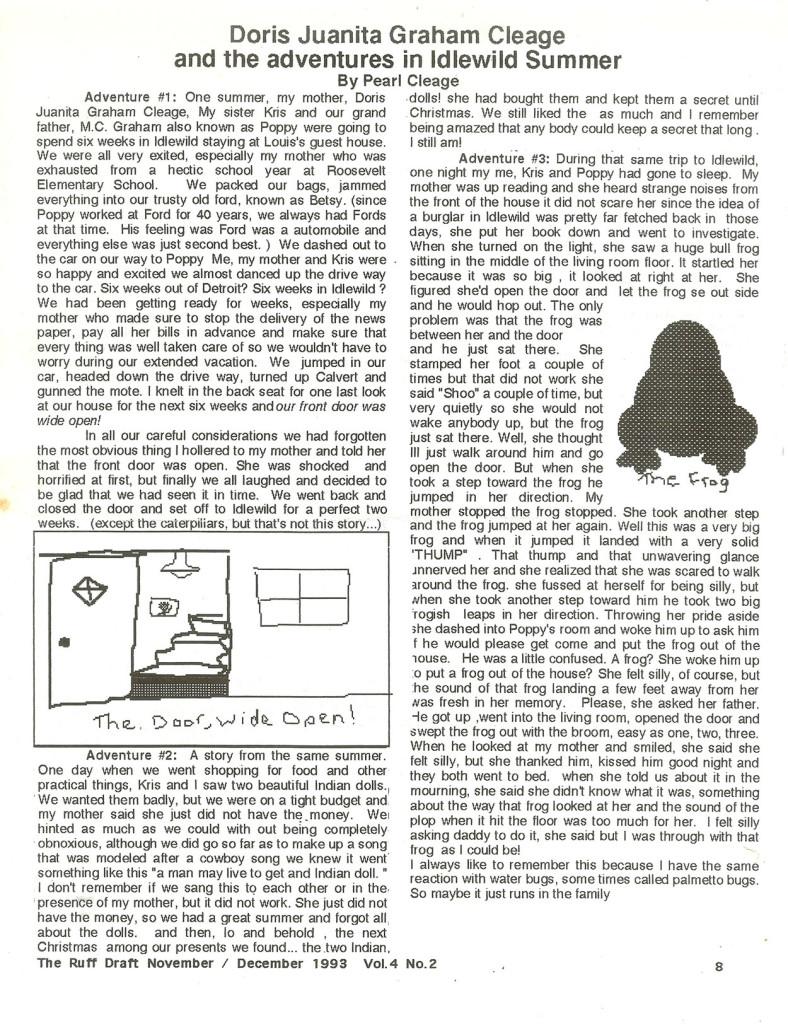 This article is from my Grandmother, Fannie Turner Graham’s scrap book.  It was printed in the Detroit Tribune on November 24, 1945.  Victoria’s parents, James and Margaret McCall, were the owners and operators of the Tribune. My grandmother wrote the date and my mother wrote the identifying information.

The postcard on the left shows the Book-Cadillac Hotel, where the interview took place, in the 1940.

Part of the article is missing.  I think my grandmother trimmed one side and part 2 was on the other side. I combined her pink article with a scan from online.

You can read more about the Tribune and the McCalls in this post “James Edward McCall, Poet and Publisher“. 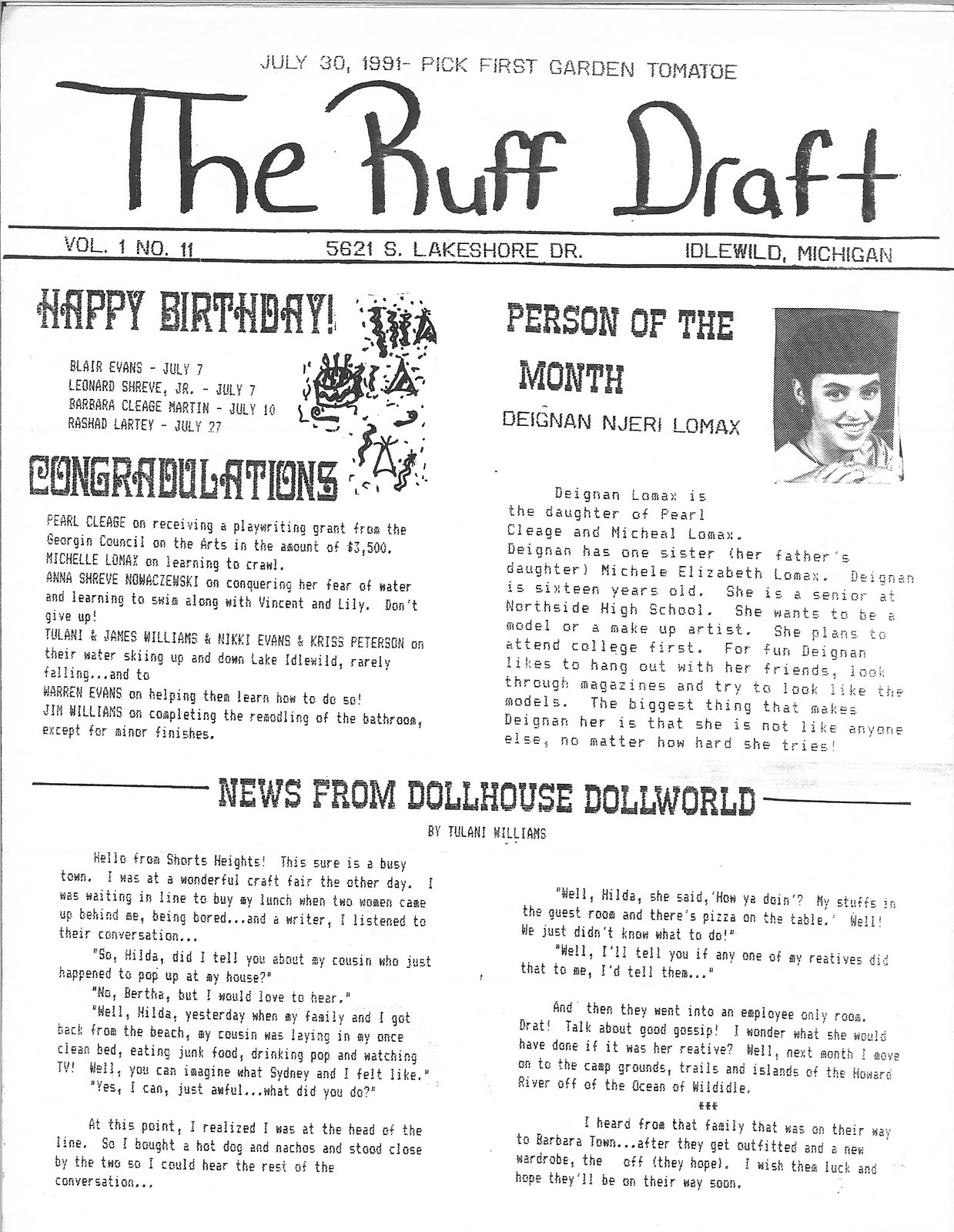 In 1990 my family began putting out a newsletter, The Ruff Draft.  We had recently started homeschooling and the purpose of the Ruff Draft was to both give real writing opportunities and show the relatives they were learning something. Here are 3 pages from the July 30, 1991 edition.  What I noticed while looking through it this morning was how similar the News Shorts on page 3 were to the News Shorts in the papers in the early 1900’s where I have found information of births, weddings and at home celebrations for my grandparents.   We stopped publishing when the writers had moved on to bigger things away from home. 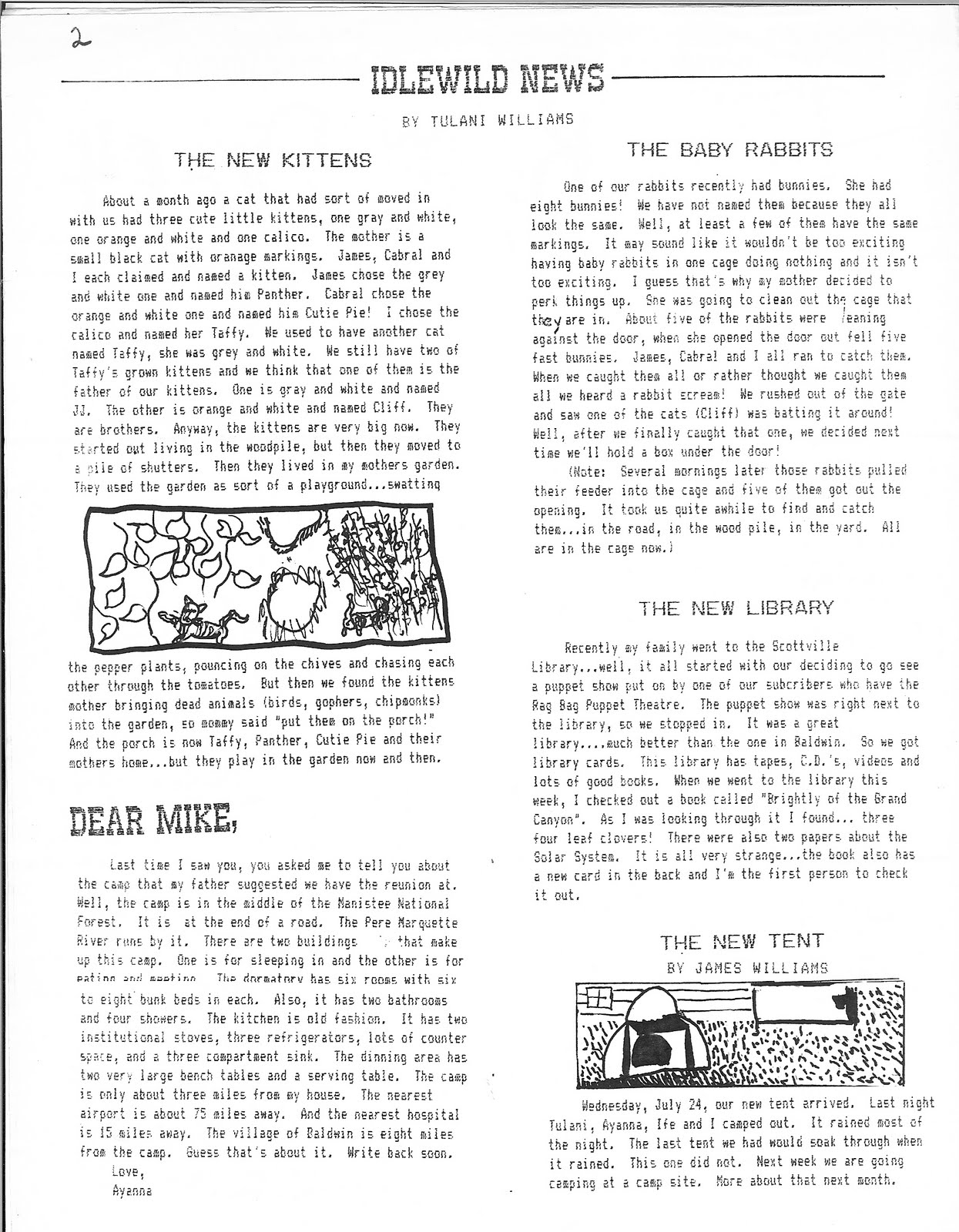 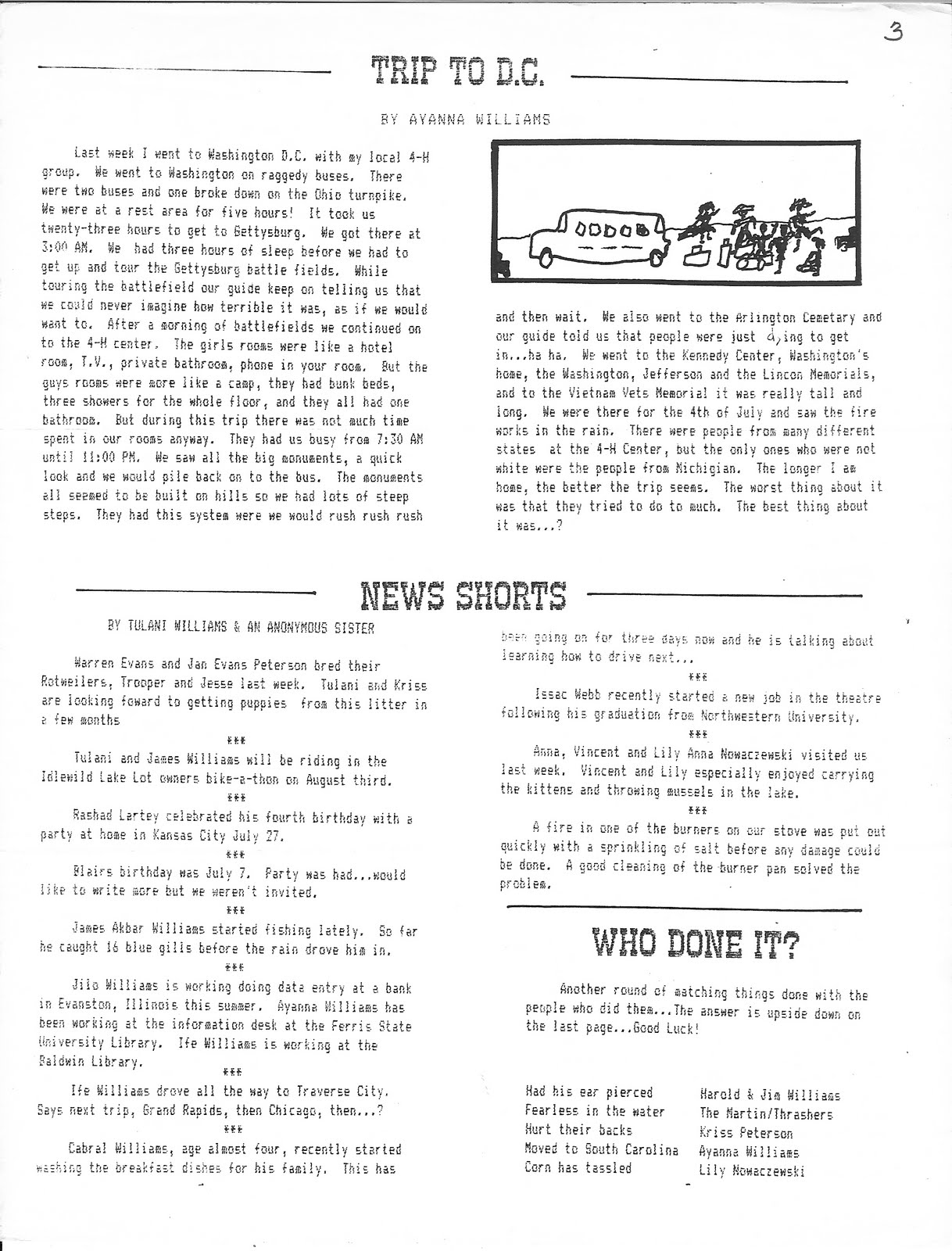 When I was elementary school age our neighborhood was majority Jewish.  We never celebrated the Jewish holidays but we learned about them.  I remember singing the dreidel song in school and learning about the menorah.  I didn’t realize Kwanzaa was in the “another tradition” category until today, so here is my late offering.  Once again I bring you a reprint from Ruff Draft 1991.  We didn’t celebrate it when I was growing up since it didn’t begin until the late 1960’s.  Our children grew up celebrating either at home or in community celebrations.

This year on the last day of Kwanzaa, which was New Years Day, we had a big to-do and invited Henry over.  We dressed up.  Tulani and I in sarongs.  That is material draped around your body and hung over your shoulder.  James and Cabral wore baggy pants and African print shirts.  Jilo and Ife, who were home on winter break, wore long skirts.  All the girls but Jilo, wore geles (head wraps).  Jilo didn’t want to cover her dreadlocks.

When Henry got there we were downstairs in our regular clothes so we ran upstairs and after much losing of skirts and falling off of wraps, we finally went down.  As we went Tulani played the drum, James used the shakare, Cabral strummed the ukelele and I had to use two blocks.  We chanted “Kwanzaa, First Fruits!” as we came. We giggled a little as we went through the kitchen.  Black eye peas, sweet potatoes and rice were simmering on the stove for us to eat directly after the ritual.  When we got to the living room, all the lights were off except one.  By that light we, in turn, read the seven principles in Swahili and their meanings in English.  The introduction was read by Daddy.  Nia/Purpose was read by Henry. Umoja/Unity was read by Tulani.  Kujichagulia/Self determination was read by Ayanna, Ujima/Collective Work and Responsibility by James.  Ujamaa/Cooperative economics by Ife, Kuumba/Creativity by Mommy for Cabral and Imani/Faith by Jilo.

Then we read the meanings explained in plain English that Jilo had written.  After we read the principles and lit all seven candles, Jilo read a story she had written about Kwanzaa with all of the principles included.  We then ushered everybody into the dining room while chanting the principles and their meanings.  Well, that was the plan, but nobody but us kids knew so the adults just sat there and watched us.  So we finally just got up and told them to come to the table.

After dinner Henry told tales about when he was a kid and about his uncles and cousins.  Some how the conversation went from reminiscing to the state of the world today. He and Jilo had quite a discussion that lasted for hours.  At the end Henry went home and we all went to bed.