It was Katie Wiley who started me on the investigation that found Thomas and his pension records. When I found a letter addressed to my grandmother, Pearl Reed c/o Katie Allen, I began searching to find out who she was and discovered so much more than I had looked for. 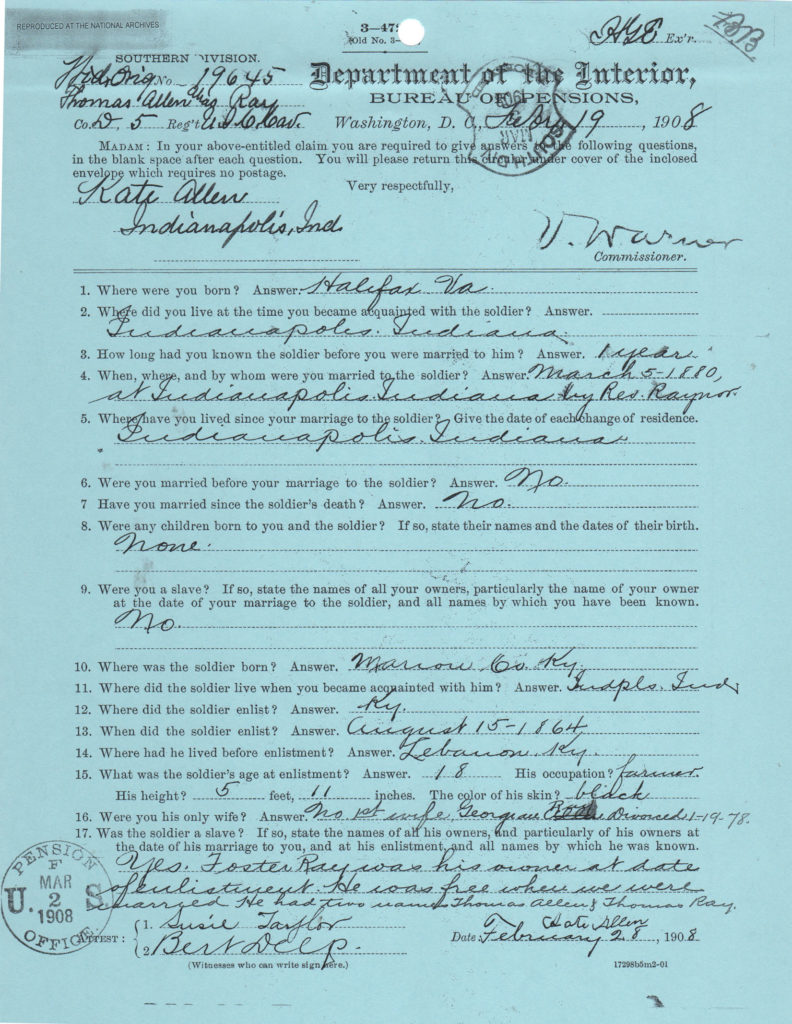 Sometimes I have a problem finding enough documentation to build a picture of the person I am writing about. This time I had the opposite situation. I will try to be brief.

Kate Wiley was born free to Woody and Sarah (Daniels) Wiley, about 1860 in Virginia. In the record above it says Halifax, in other records it says Fairfax.  She was part of the large family of Deborah Wiley. We find Deborah Wiley and her children described in the Pittsylvania County Virginia, Register of Free Negroes.1807-1865.  I am only sharing Deborah and Woody’s descriptions.

The said DEBORAH WILEY is a mulatto girl between18 and 19 years of age, about five feet four or five inches, has black bushy hair, aquiline nose, effeminate voice and rather pleasing countenance.

Reg # 9, Sept 24, 1852, DEBORAH WILEY,a free negro born free who hath been numbered and registered in the Clerks office of the County Court of Pittsylvania is this day again registered.

Deborah and her children moved first to North Carolina and then to Athens County Ohio where they were living by the 1860 census.  A ten year old  Katherine Wiley was living with Deborah Wiley and her son Jackson and his wife. Another son, Israel Wiley lived next door. Katherine’s father, Woody and the rest of his family lived in the same county.  The members of these households were all listed as mulattoes, born in Virginia, except for Deborah who was born in Kentucky and the younger children who were born in Ohio.

Some of the family was involved in the underground railroad – helping escaping slaves make it to freedom.

In 1870 an 18 year old Kate Wiley was working in Washington County Ohio, the next county over from Athens, in what appears to be a rooming house for students With Physician Benjamin F. Hart listed at the top. Kate is listed a domestic.

In 1880, Miss Kate Wiley, colored, appears in the Indianapolis, Indiana City Directory. That same year she married Thomas Allen, who was working as a laborer at that time. Not too long afterwards they bought the house at 2715 N. Capital where they lived for the next 40 years. Kate did not work outside of the home until after her husband died in 1907. 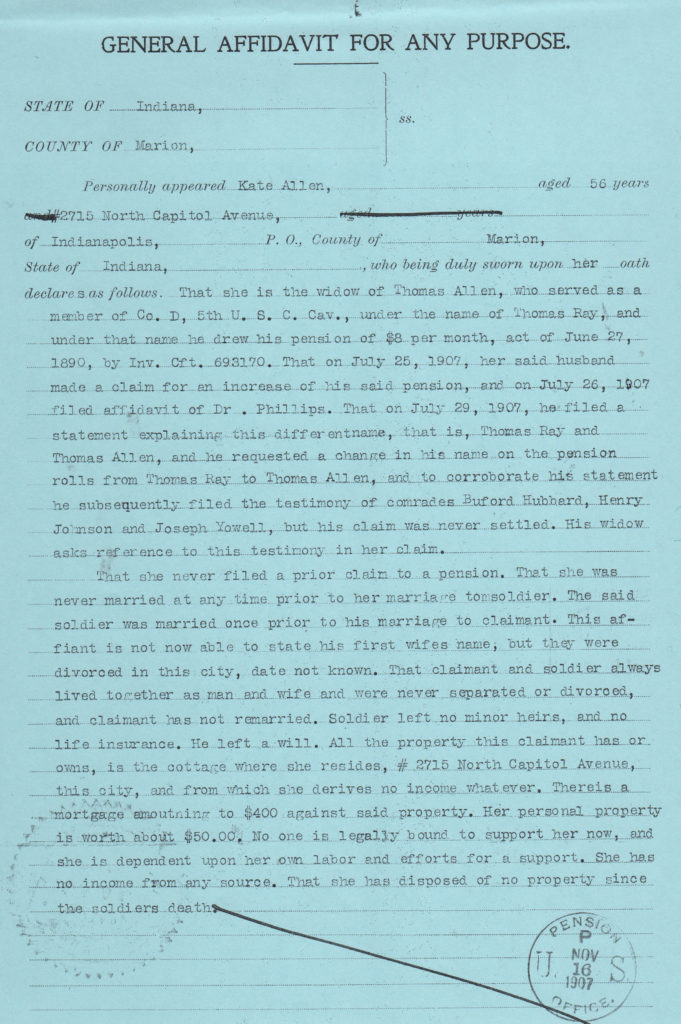 In the 1910 Census 54 widowed Kate was living in the house on N. Capital with her older sister, 68 year old Sarah Wiley. Kate was working as a domestic. She owned the house, which was mortgaged. She had given birth to no children. Sarah was single and did not work outside of the home.

In 1915 Katherine Allen appears in the Springfield Ohio City Directory at 34 W. Clark Street. In August of that year, the mailman returns her pension check with the information that she was dead.  She died on June 9, 1915 and her body was returned to Indianapolis to be buried at Crown Hill Cemetery, where Thomas Allen was buried. 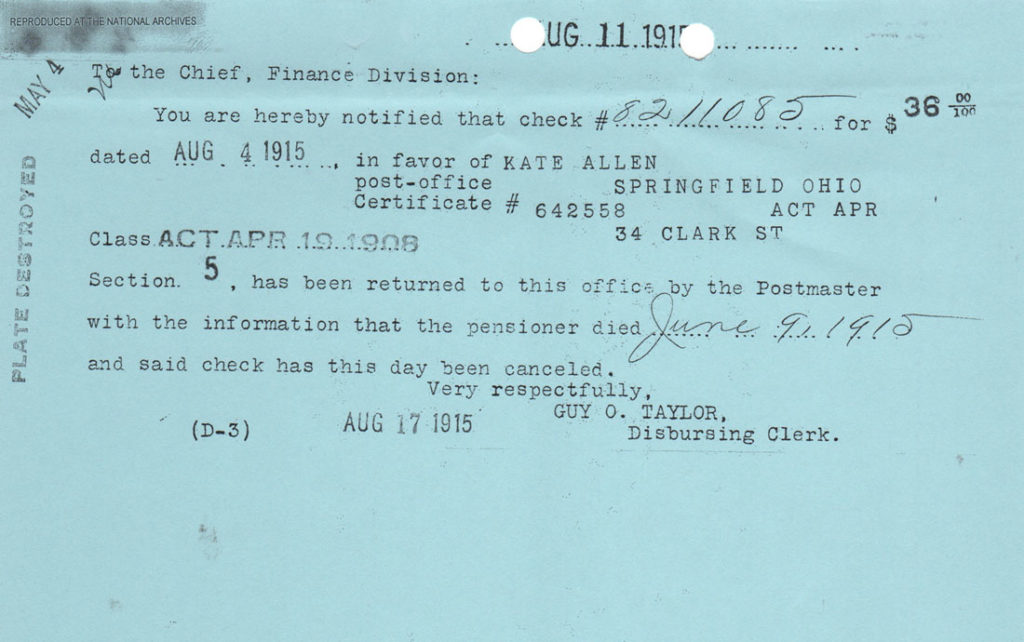 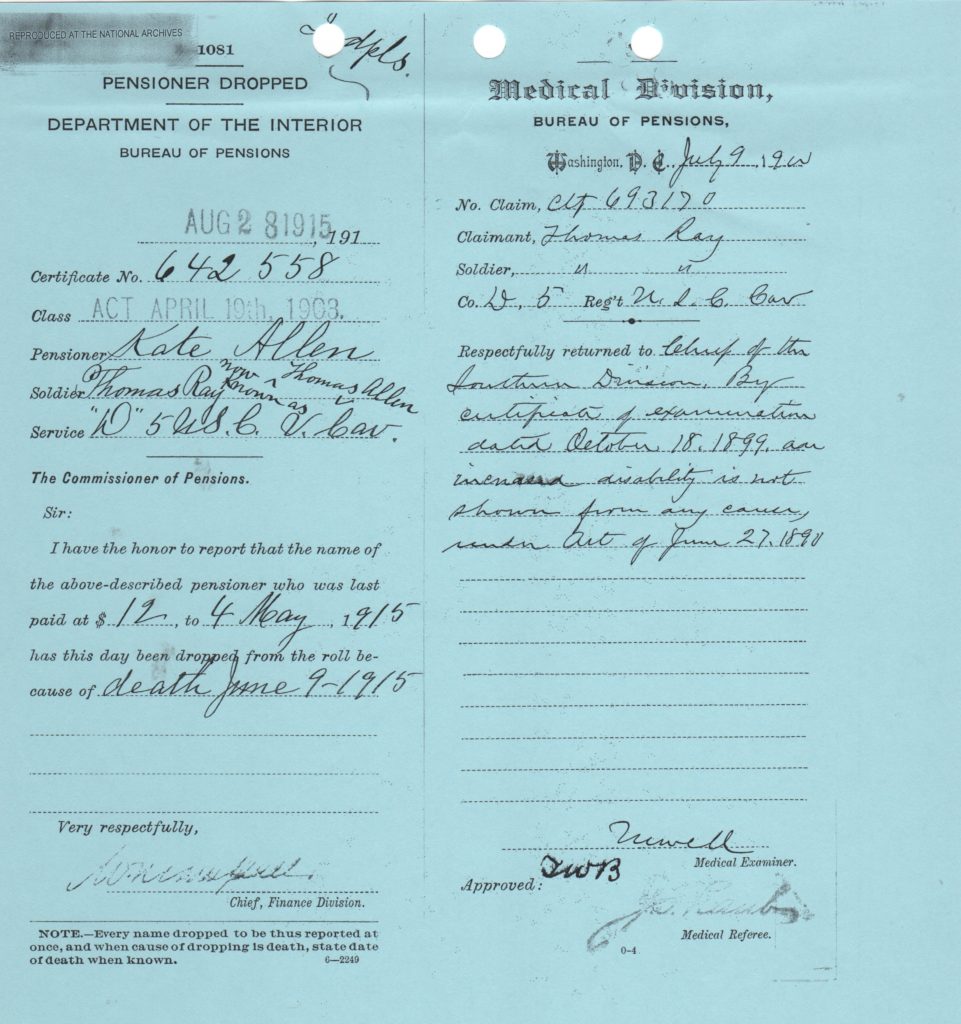 While investigating the life of Kate Wiley, I found that her family connected with mine in another way. Her older sister, Francis “Fannie” Wiley became the 2nd wife of Robert Augustus Busby. He was also born in Virginia and lived for some years in Athens, Ohio. They later moved to Berrian County Michigan.  James Busby, son of Robert Busby and his first wife, Harriett (Francis’ stepson) married my great grandmother Anna’s (Thomas’ sister) daughter Sarah Reed. Their children were my father and his siblings first cousins.

Here is a link to the post from the 2014 A to Z Challenge where the envelope first appeared, although I did not mention Katy because I could not find anything about her at that time.   L is for Lincoln Hospital