Angela Walton-Raji of the blog My Ancestor’s Name suggested that tonight we observe Watch Night by naming our ancestors who were born into slavery but lived to see freedom. I decided to join her.

I have no photograph of Annie Williams (mother of Eliza Williams Allen) who was born about 1820 in Virginia and died after 1880 in Montgomery, Alabama.

I do not have a photograph of  Matilda Brewster (mother of Dock Allen) who was born in Georgia.

Eliza Williams Allen was my great great grandmother. She was born in Alabama about 1839 and died free in Montgomery, Alabama in 1917. She was a seamstress.  You can read more about Eliza here A Chart of the People in Eliza’s Life and Eliza’s Story – Part 1 with links to the other 3 parts.

Dock Allen was my great great grandfather. He was born a slave in Georgia about 1839 and died free in Montgomery, Alabama in 1909.  He was a cabinet maker. You can read more about Dock Allen here Dock Allen’s Story.

I have no photographs of  my great grandparents William Graham who was born about 1851 or his wife Mary Jackson Graham born about 1856. Both were born in Alabama and died dates unknown.  William Graham was a farmer. They were my grandfather Mershell C. Graham’s parents. I know very little about them but I have been gathering information which I will post soon.

Frank Cleage was born around 1816 in North Carolina. He was enslaved on the plantation of first Samuel Cleage and then his son Alexander Cleage.  I do not have a picture of Frank Cleage and have no stories about him. His name appears on my great grandfather, Louis Cleage’s death certificate.

In the 1870 Census he was living with his wife, Judy and six children, including my great grandfather, in Athens, Tennessee. I also have a marriage record for Frank and Judy dated 20 August, 1866.  I don’t know if they were married before and the children are theirs or if they came together after slavery. Judy was born about 1814.

Frank is mentioned in a work agreement between Samuel Cleage and his overseer in this post – Article of Agreement – 1834.

They were both born in slavery and lived most of their lives as slaves but they lived to see freedom and to see their children free.

No photograph of Louis Cleage B. 1852 in Tennessee and died 1919 in Indianapolis, IN.  Louis and Celia were my grandfather Albert B. Cleage’s parents. Louis was a laborer. You can read more about Louis Cleage here – Lewis Cleage – Work Day Wednesday.

I do not have photographs of my great grandmother Anna Allen Reed who was born about 1849 in Lebanon, Kentucky and died in 1911 in Indianapolis, Indiana.  She was my grandmother Pearl’s mother.

Anna’s mother Clara, my great great grandmother, was born 1829 in Kentucky and died after 1880 in Kentucky.  I need to write them up. You can see some of their descendents here My Father’s Mother’s People.

What education did your mother receive? Your grandmothers? Great-grandmothers? Note any advanced degrees or special achievements.

On My Maternal Side
My 3X great grandmother, Annie Williams,  was born about 1820 in Virginia into slavery. According to the 1880 Census, when she was about 60, she spoke English and could not read or write.

Her daughter, my 2X great grandmother, Eliza Williams Allen, was born in Alabama about 1839 into slavery. She was freed by 1860. According to the 1910 census, she was about 67, spoke English and could not read or write

Her daughter, my great grandmother, Jennie Allen Turner was born free in Montgomery, Alabama in 1866. According to the 1880 Census, she was 13 years old, had attended school in the past year, spoke English and was literate.  I found one of my favorite books at her house “Lydia of the Pines.”

Her daughter, my Grandmother Fannie Mae Turner Graham, was born in 1888 in Lowndes County, Alabama. She grew up in Montgomery. According to the 1900 census, she was 11 years old, at school, spoke English and was literate. My mother told me that when Fannie graduated from high school – State Normal, was offered a scholarship to Fisk but refused it and took a job in her uncles store, which she managed until she married in 1918. Also according to my mother, Fannie could quickly add long columns of numbers in her head.

My mother , Doris Graham Cleage,  was born in Detroit in 1923. She graduated from Eastern High School in Detroit and received a full scholarship to Wayne State  where she earned a BA with distinction as a Sociology major in June/1944. She returned to school in 1951 and earned teaching certification. In 1958 she became a masters candidate in education, completing her Master’s of Education Degree in the fall of 1958.  She took postmasters classes in education during a sabbatical in 1963. She also took evening classes  in 1968, when I was a senior at Wayne State.

My great grandmother, Emma Jones Turner (My grandmother Fannie’s paternal grandmother) was born about 1840 in South Carolina into slavery.  According to the 1880, 1900 and 1910 census she spoke English and was literate. I wish I knew more about her. I never heard a story about her. After my grandmother’s father was killed when she was 4 years old, her mother broke all ties with her husband’s family.

On My Paternal Side

My great grandmother Celia Rice Cleage Sherman was my grandfather’s mother. She was born about 1855 into slavery in Virginia and brought to Tennessee as a child. She was about 10 when freedom came. In the 1880 census she could neither read nor write. By the 1930 census she spoke English and could read but could not write.  I wonder if my grandfather or his siblings taught her to read when they went to school.

My 2X great grandmother, Clara Green was born into slavery about 1829 in Kentucky. She was my grandmother Pearl Reed Cleage’s grandmother. In the 1880 census she was listed as about 55, spoke English and could not read or write.

Her daughter, my great grandmother Anna Allen Reed  was born  about 1849 in Kentucky into slavery.   According to the 1910 Census she spoke English but could not read or write. Anna’s four older children were illiterate while the four youngest were literate.

Her youngest daughter, my grandmother Pearl Reed Cleage was born in Lebanon, Kentucky in 1886. In the 1900 census she was 16 and where it says if you were or were not in school it says “Book 1” I don’t know what that means.  At any rate she was literate and spoke English. My Aunt Barbara told me she finished high school. I remember my grandparent’s house being full of books. 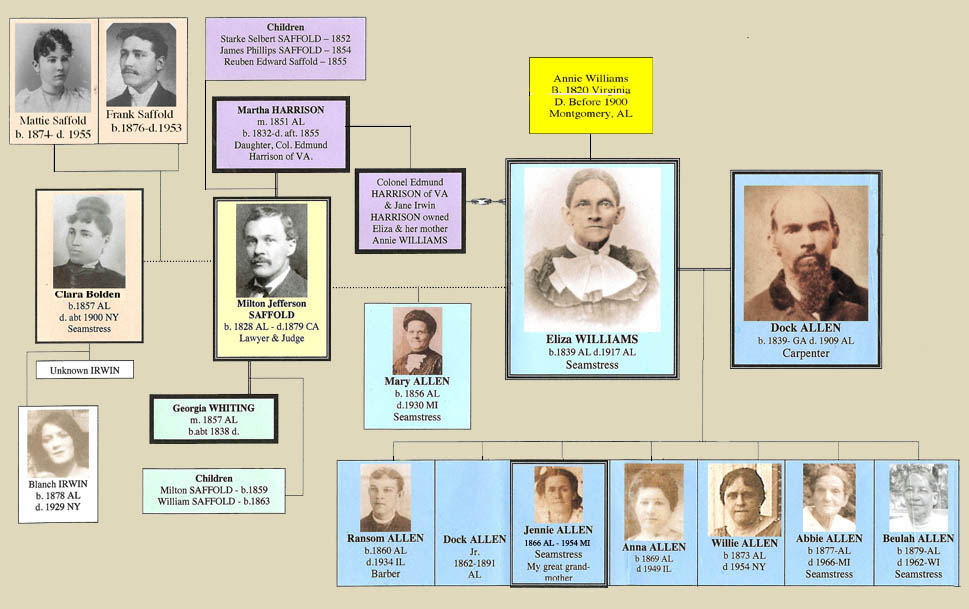