This is my ninth year of blogging the A to Z Challenge. Everyday I will share something about my family’s life during 1950. This was a year that the USA federal census was taken and the first one that I appear in. At the end of each post I will share a book from my childhood collection.

Visits from Detroit over those five years we lived in Springfield were common. During 1950 my Elkins cousins traveled to Springfield in August with their mother, Mary Vee, my mother’s sister. I think they traveled by train, as we did when we went to Detroit. I don’t remember where they slept or eating together or anything about the trip, but I have the photos to show it happened.

On the back of the photo (Tod is my father) “Tod caught this unaware! E-Gad! He says we look like typical mothers – so he says!” Taken in Springfield, Mass Aug. 1950

Unfortunately, these are not the same illustrations, but the same story

I am 46 years of age, a washerwoman and my post office address is, D St. Peabody’s Row, Chattanooga, Tenn. I have known Katie Cleage ever since we were children, we lived at Athens Tenn., and I was with her very often for several years before the war. I remained in Athens about a year or more after the war broke out and then I came to Chattanooga to live.

I knew Philip Cleage from the times he was a boy and after he went in the army. His regiment was encamped near where I lived in Chattanooga. Philip was an old beau of mine and used to pay me attention. That was before he went in the army. We were never engaged to be married to each other.

When I lived at Athens and about a year before Philip went in the army he was married to the claimant Katie Cleage.  I did not see them married. I was not there and heard they were married and after that I often saw them together and after Philip went in the army and while he was at Chattanooga before Katie came here from Athens he used to call and see me. He told me then that he had married Katie. After they were married they lived together in the quarters and it was known by all the people on the plantation that Philip and Katie were married.  I used to go out to their quarters, there were a great many servants, near a hundred besides a great many children. They did not have any children at that time to my knowing. I never heard that Katie had children which did not live. After Philip went in the army I saw Katie here once and then Philip told me he was going to get a furlough to go see her and I had never seen or known much about her since his death. I don’t think I would know her if I should meet her now.

At the time Katie was here during the war, I do not know whether she was in the camp with Philip, I never visited the camps, the people I was with were very strict and never let us run about much. I didn’t know what year it was that Philip died but I remember his being taken to the small pox hospital. I did not see him, but I heard of his sickness and death. I do not know whether Katie was there at that time or not.

I never have had any connection with Katie relative to her pension. I have not seen her for years to know her. When Katie lived on the farm, she was Mrs. Cleage’s house girl. I don’t know, I think Philip just worked on the farm. I never staid out to the farm all night.

I am not related. I have no interest whatever in this claim for a pension. I have fully understood all your questions and my answers have been correctly recorded.

Minerva Allen was a washerwoman, as were quite a few of the women who have given depositions so far. I found her with her husband Beau Allen in the 1870 census. They had just been married in August of that year and were living in Chattanooga. He was born in South Carolina and was a porter in a saloon. Minerva had been born in Tennessee and was keeping house.

In 1876 I found Beau in the City Directory working as a barber. That was the last I found of Beau. By 1880 Minerva and her three sons – Frederick 9, Willie 8 and Eugene 2. The family was living with a white couple in Athens, TN. Minerva was a servant.

In 1890 Minerva testified in Katie’s pension hearing. In 1892 Minerva was listed in the Chattanooga City Directory as a laundress. That was the last I found of Minerva. I was unable to find any marriage or death records. I did find a Eugene Allen, the right age who lived to marry and have a son, also named Eugene Allen. Then I lost them too.

Below are some articles about black washerwomen that I found interesting.

“The Negro Washerwoman, a Vanishing Figure” By Carter G. Woodson
“Washing Clothes Before Chinese”
‘We Mean Business or No Washing’: The Atlanta Washerwomen Strike of 1881

Resources I used for this post include: Katie Cleage’s Pension file and Ancestry.com

For links to the other posts in this series, click this link –> Katie Cleage’s Pension Hearing

Sarah Jane Reed Busby was my grandmother Pearl Reed Cleage’s older sister. She was sixteen when my grandmother was born. She grew up in Lebanon, Kentucky and moved to Indianapolis around 1887. In 1889 she married James Busby and moved to Benton Harbor Michigan where their ten children were born. All but the two oldest lived to adulthood.

Her husband James; four of her sons – Rosco, Roscoe, James and Morris; two of her sisters – Josie and Lillian and three of her brothers – George, Hugh and Clarence preceded her in death.

You can read more about Sarah Jane Busby in these two posts: Correspondence Relating to George Reed’s Estate and Canning With Aspirin Instead of Sugar.

After reading To Award Or Not to Award on the blog Seeking Susan~Meeting Marie~Finding Family about giving and receiving blogging awards.  I was sorry to learn that people are falling out over this. I had no idea it was such a loaded topic. I have decided that Catherine is right. It is only fair if bloggers, like me, who never fulfill the requirements of passing on the awards to other bloggers, let people know so that when awards are being given out, they go to people who will do all that is required.  I googled and found quite a few “Award Free Blog” badges but I decided to design my own and post it in my sidebar.  This doesn’t mean I don’t appreciate the awards I’ve received or that I am judgmental about who gets or gives awards.  I do and I’m not.

There has been a flurry of blog awarding going on recently and I have received a few.  I love knowing that people read my blog and I’m overjoyed when they like it.  I must admit though that I have always been uneasy about the passing the award along part and even the posting and writing about it part.  It took as long for me to write this post about awards as it does to write a regular blog post.

I remember the blogging award frenzy of 2009 -2010. It finally reached the point where there was nobody left to receive the awards because everybody had been nominated at least once. It hasn’t gotten quite that far this time but it’s heading there. This post – Blogging Genealogy: Blog Awards and SEO and the discussion now happening on Pauleen’s blog here – Blog of the Year 2012 Award Updates raise some interesting questions and concerns about blog awards in general.

Instead of fulfilling the requirements for the awards, I would like to thank everybody who has given me an award and those who have read my blog and commented either here or on facebook or Google + or Follow Friday me on Twitter, and also those who read and think about what I post without commenting.  Instead of passing on the awards I am going to continue visiting blogs I enjoy, commenting when I have something to say and I’m going to set up a list of blogs that I read regularly and enjoy so that my readers can check them out for themselves if they want to.

Now the awards and Thank yous.

Because of the “Wonderful Team Member Readership Award” I discovered how to see the number of comments every reader ever made on my blog since moving to this site.  Who knew?  I didn’t.  Sheryle of  A Hundred Years Ago was my most prolific commentator with 74 comments. 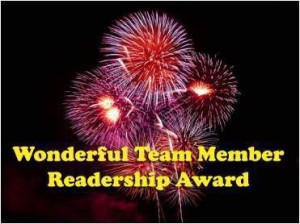 Andrea Kelleher of How did I Get Here? My Amazing Genealogy Journey.

Wendy of  Oregon gifts of Comfort and Joy 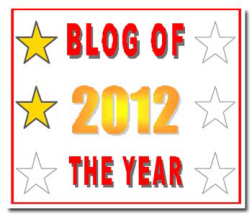 Pauleen of Family History Across the Seas

Kathy of Abbie and Evaline selected me for the Liebster Blog Award – “liebster” meaning “dearest” in German.