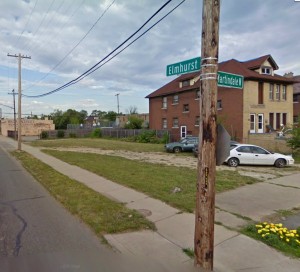 This post continues a series using the Alphabet to go through streets that were significant in my life as part of the Family History Through the Alphabet Challenge.  I wrote this post with “Sharing Memories: Leaving Home” in mind too.

In late March of 1969, I moved into my first apartment. I was in Detroit. It was located at the corner of Elmhurst and N. Martindale.  I was 22 years old and so happy to be in my own space and not to have to answer to anyone.  My rent was $80 a month, utilities included. I earned $50 a week at the Black Star Sewing Factory.

Journal entry  – March 29, 1969
reading back (in my journal) is strange.  I don’t feel that way any more.  Living alone takes the pressure off.  What you do, you do for yrself not through  fear of displeasure and endless discussions.

Not surprisingly, the building is no longer there. Neither is the short row of store fronts behind it.   I found the apartment building below using Google Maps. I moved it to the empty lot at Elmhurst and N. Martindale using Photoshop.  The size and layout of the apartment is about the same. I had to change the color of the bricks from red to yellow.  My apartment was #304. You can see it on the top floor. The first windows on the right were my neighbors bathroom and bedroom windows.  My bedroom window is next, the short window is the bathroom, then my living room and last the eat-in kitchen. 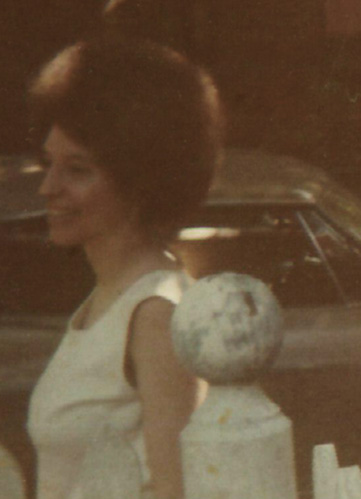 My furniture was basic and made or found, except for the mattress. It was new and sat flat on the floor without spring or frame. I made curtains out of burlap which gave the rooms a nice orange glow when daylight showed through. I stacked a pile of shag rug pieces for a couch.  A piece of green fabric was stuffed with fabric scraps made a pillow to sit on. It was heavy as lead. Jim found an old table and some chairs somewhere for the kitchen. I used a box for a bedside table and the phone sat on that too. I kept my clothes in the closet or in the old trunk at the end of the bed. I had a nice round table top but I never got any legs for it.  I had an old combo radio/record player that had once belonged to my parents and had passed on to me. 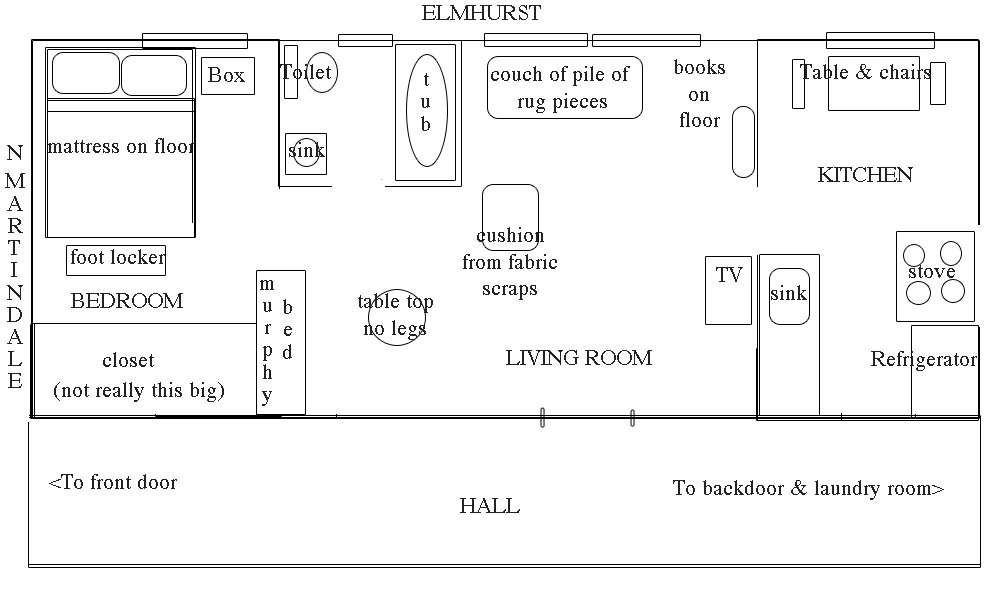 I bought a sewing machine from Sears and returned it because parts were missing and it wasn’t what I wanted after all. Eventually I ordered a “Hudson” sewing machine, from J.L Hudson’s. It was a Japanese made machine and just like the one my mother had, except they had replaced some of the metal parts with plastic.

One night I was awakened by a loud crash and a flash of light.  A car had crashed into the telephone pole across the street. It was horribly crushed. A small, silent, crowd gathered. Everybody cheered as the driver climbed out of the window, unhurt.

Journal entry     June 30, 1969
Last night cooked cabbage and pork chops and rice at 1:00AM.  it was the first decent meal I’ve had in a month because I didn’t have any food and have been eating rice and beans.  I kept burning them and scorched black eyed peas are no treat.  I guess things are going to be o.k. for a while again.  It’s really nice outside.  Sunny, windy instead of 98 and muggy.

I remember the joy of going to a supermarket instead of the mom and pop store across the street and laying in a supply of groceries. Eating wasn’t something I spend a lot of time thinking about, planning for,  or doing at that time. Eventually my mother gave me a copy of “The Joy of Cooking” and I started making my own bread.

Journal entry  July 15, 1969  Saturday 2:10PM
I got another job after sewing It’s from 6 – 8pm , organizing teenagers.  some Methodist 5 week “imaginal education” program in Highland Park.  for reasons unknown, they made Jim director.  $30/wk for 6 weeks plus a $75 bonus at the end.  supposed to be with black teens but one center was mixed and I’m in it.  luckily i have Arthur, a 17 or 18 year old black-panther-cass-dropout and his girlfriend to work with me.  he’s actually good at working with the teens.  he gets on very well with them.  he got them all het up yesterday about organizing their community. they’re 13-14. only about 12 came.  first 2 days NOBODY came and we were afraid we’d be fired, but then one girl came and the next day, three came.  out of the 12, 2 are Mexican, 2 black and the rest white.  it should be interesting.   hardly ever get home before 10:00pm.

I spent a lot of time thinking about Jim and wondering about where we were going and where he was and when he was coming by and why he hadn’t come by and how long he was going to stay and on and on and on.

Journal entry      June 4, 1969
i’ve been listening to  Leonard Cohen’s new record.  two days over and over. at first it was tired, but now i really like it, after the 2,000th revolution. i like  the partisan song best, about coming out of the shadows.

Started thinking about some of the things happening in 1969 when I moved into my own apartment…Woodstock, war in Vietnam, war protests, draft lottery, moon landing, Nixon takes office, Hurricane Camile hits, New Bethel incident in Detroit, Robert and Mabel Williams return to the United States after years in China, Fred Hampton killed by police, protest at colleges continue, police attack on gays at Stonewall Inn, starvation in Biafra. And lots of music.

You can read about my first moving out on I Once Worked at a Sewing Factory and about my trip up and down Broadstreet to work at B is for Broadstreet.