In 1991 we lived in Michigan on Lake Idlewild in an old house. Two of our daughters, Jilo and Ife, were in college  Jilo was at Northwestern University in Evanston, IL and Ife was at the University of Michigan in Ann Arbor, MI.  The four younger children had been homeschooling for several years. My Uncle Henry lived several miles away on Water Mill Lake. My sister Pearl and her husband drove up from Atlanta. 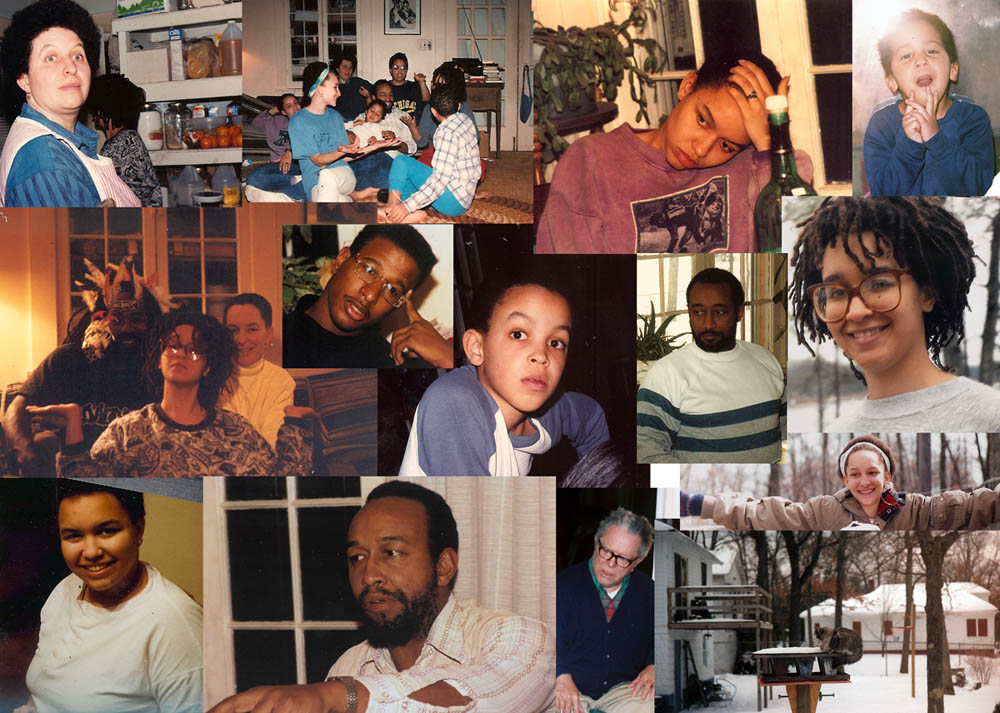 My memories of this Thanksgiving begin with the snow storm that dumped at least a foot of snow on us. It started the day before and continued into Thanksgiving day.  I remember waiting for people to arrive, standing out in the yard looking through the woods at the road and seeing cars coming through the snow.  There were more people there then we had ever had before and everybody but Henry stayed for several days. The 29 pound turkey fed us all. I know we had a very big table in our small dining room and we brought another small table in so everybody ate in the dining room… or did some of the younger people eat at a card table in the living room?  My brother-in-law, Michael, video taped the dinner and conversation which lasted long after the meal was over.  I looked for the tape last night but it’s not here. I hope someone borrowed it and we can get it back.

The conversation was about race, responsibility, aliens from outer space landing on the deck, why black men didn’t turn the slave ships around, had we ever fought for freedom, the Status Theory (this was Henry’s theory and will have to have a post of it’s own one day.) The men did most of the talking and as the night wore on, became pretty heated.  Especially between college student, Isaac and my sister’s husband Zeke. I remember there being something of the young male challenging the older or maybe it was the older seeing a challenge and not giving an inch. Henry was right there in the thick of it. I remember asking several times, now that we knew the problem, could we make a plan?? What we were going to do? There was no answer because it wasn’t that kind of practical discussion.  It was about theory and well, status.  In fact, the whole discussion was sort of a proving grounds for Henry’s theory, which was in short that life is all about fighting for status.  At least among the males.

I don’t remember what we had for dinner but I know we had turkey with cornbread dressing, greens from the garden (I put up plastic tents over them and we got greens into January, whatever the weather.), fresh cranberry sauce, rice, sweet potatoes, rolls, pound cake and pumpkin pies (from our own pumpkins). We had these on the table because we always do.

I remember Isaac taking the family photograph with all of us sitting on the rug. I don’t remember where everybody slept. By Monday, the snow was melted and the visitors had returned homes.  Click to read Thanksgiving 1991 Part 2.

Below is an article from “The Ruff Draft” by Ayanna. 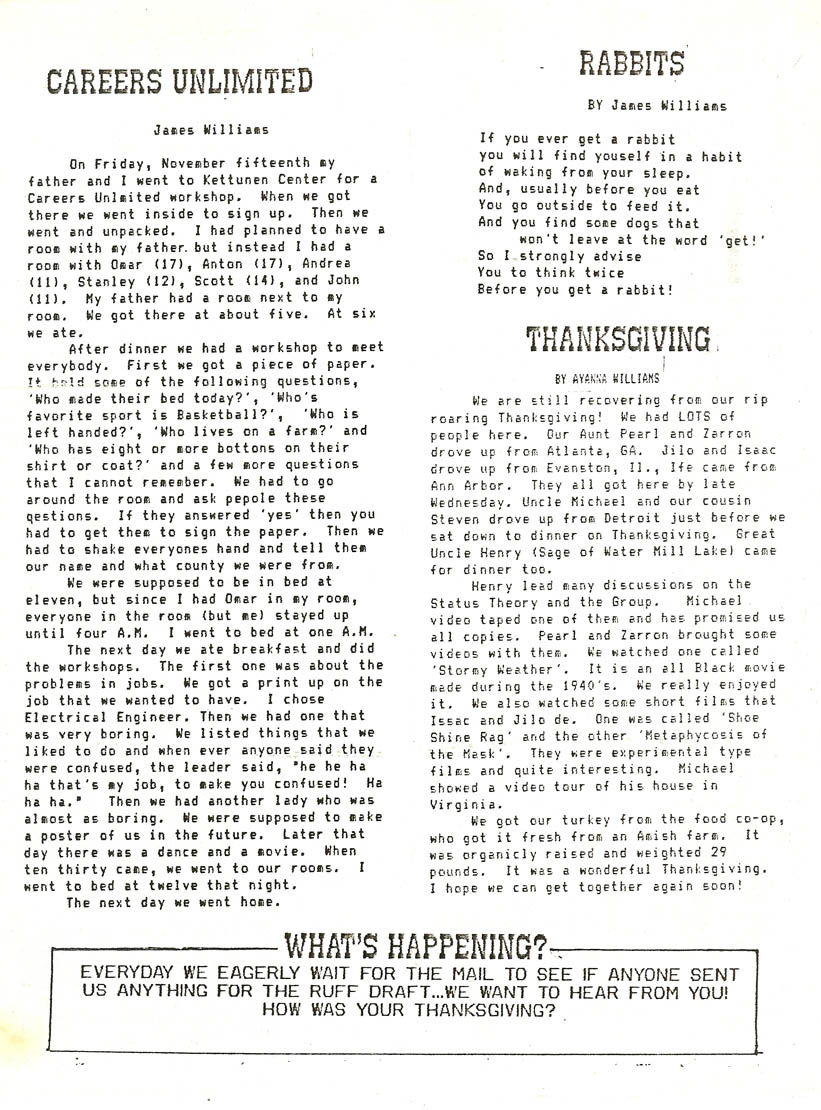 We are still recovering from our rip roaring Thanksgiving!  We had LOTS of people here.  Our Aunt Pearl and Zaron drove up from Atlanta, GA.  Jilo and Isaac drove up from Evanston, IL., Ife came from Ann Arbor.  They all got here by late Wednesday.  Uncle Michael and our cousin STeven drove up from Detroit just before we sat down to dinner on Thanksgiving.  Great Uncle Henry (Sage of Water Mill Lake) came for dinner too.

Henry led many discussions on The Status Theory and The Group.  Michael video taped one of them and has promised us all copies.  Pearl and Zaron brought some videos with them. We watched one called “Stormy Weather”.  It is an all Black movie made during the 1940’s.   We really enjoyed it.  We also watched some short films that Isaac and Jilo did.  One was called “Shoe Shine Rag” and the other “Metaphycosis of the Mask”.  They were experimental type films and a quite interesting.  Michael showed a video tour of his house in Virginia.

We got our turkey from the food co-op, who got it fresh from an Amish farm.  It was organically raised and weighted 29 pounds.  It was a wonderful Thanksgiving.  I hope we can get together again soon!