I have been writing this post for way too long, getting lost in research and real life. A Sepia Saturday prompt a week ago featured a posh hotel and made me start to work again.  This post does not feature a hotel, rather the lack of one because black motorists back in the 1930s were not welcome in white hotels as they traveled.   In 1936 The Negro Motorist Green Book began publishing and shared information about lodging places that Negro motorists could be sure of a welcome.  Before that people stayed with friends or friends of friends or kept driving. Click on all images to enlarge. 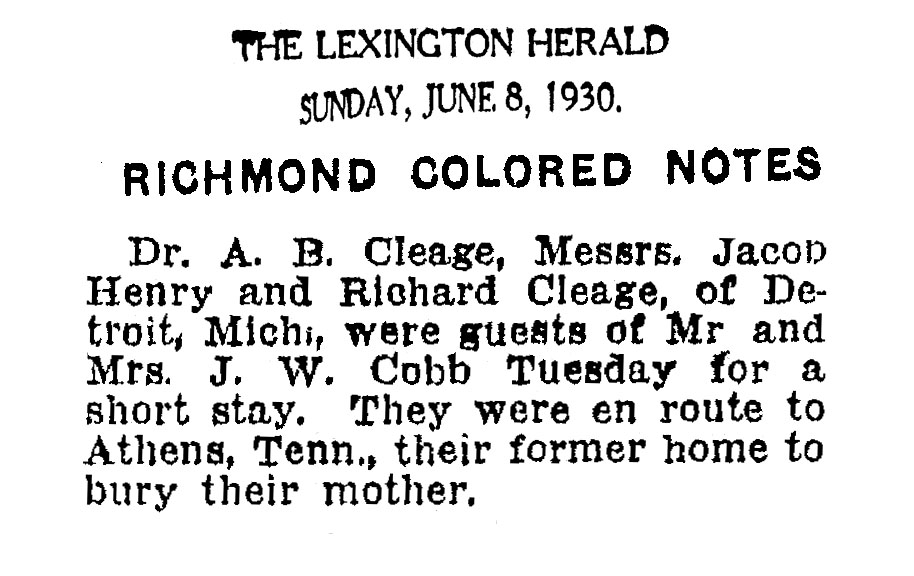 I had been unable to find my great grandmother, Anna Celia Rice Cleage Sherman’s death date or death certificate before finding  the above item. After jumping up and down shouting my joy at finding the date, I began to wonder who the Cobbs where that my grandfather and his brothers stayed with.  I came across several other items from different years, with various family members stopping with the Cobbs in Richmond, KY on their way to or from Athens, TN.  How did my family know the Cobbs and who were they? 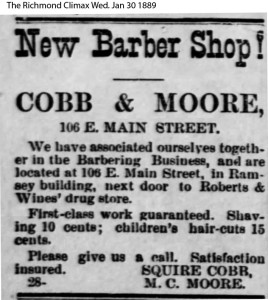 John Wesley Cobb was born in 1882 in Richmond, Kentucky to Squire and Malinda (McCallahan) Cobb.  His parents were born in slavery in the 1846 and 1859. By 1889 Squire Cobb was an important member of Richmond’s black community.  He was a barber with his own shop, a member of the Knights of Pythias, and St. Paul’s African Methodist Episcopal church. Malinda Cobb birthed 9 children.  Six lived to adulthood.  Both parents were literate and the children attended school.  John and one of his brothers were tailors.  His sister Susie was a teacher before her marriage. His oldest sister, Lena, married a barber.  Malinda Cobb died in 1916.  Squire Cobb died at about 89 years of age in 1935.

John Wesley Cobb married Bessie Pollard about 1803.  They had one daughter , Leona Cobb, in 1904.  They later divorced and both remarried. John second wife was Lillian Titus, who taught school when they were first married.  They had no children.

JW Cobb started as a tailor for the R.C.H. Covington Company, a department store in downtown Richmond.  He sewed on clothes like the one pictured in the advertisement below.  Later Cobb, was able to open his own tailor shop and he continued to work on his own account through out the following years. 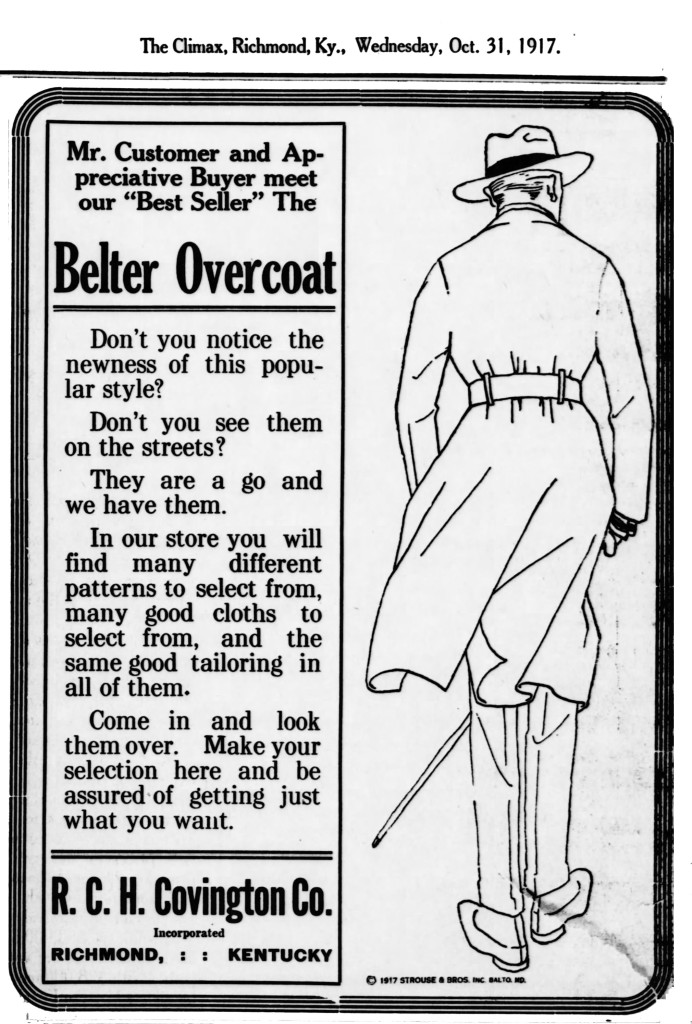 John W and his wife Lillian  owned their own home at 311 First Street. John Wesley was an active member of St. Paul A.M.E. Church. In several news items, he is listed as Rev. JW Cobb, assisting the Pastor at funerals.  I suspected that the paper had the wrong name but I just found him in the death index on FamilySearch and his title is given as Rev. In 1935, the Cobbs presented gold footballs to the football team at an awards banquet. I wish there had been a picture or a description as I don’t know if they were little pins or full size footballs!

He and his wife appeared regularly in the news/society items in the Richmond Colored Notes.  He served as secretary for the group that sponsored the Madison County Colored Chautauqua.

On December 16, 1946 Lillian Cobb died from breast cancer that had spread to her spine.  Her husband was the informant.  On the 28th of February 1958, John Wesley Cobb died. I have not yet found his death certificate, and I do not know what he died from.

I still don’t know how my family knew the Cobbs.  Some possibilities are that my grandfather’s brother Henry’s wife, Ola Adams Cleage, knew them.  She was raised and went to school in Danville, Kentucky which is in the same general area.  Or perhaps they knew some of the same people who put them in touch.  Another possibility is that some of JW Cobbs siblings that moved to Michigan met the Cleages.  Some of them lived in Detroit and in Yipsilanti, Mi outside of Detroit at different times.

On the way to bury their mother