I found this article today.  It had a photo included but it was so dark it was impossible to see anything except that it was the same photograph that I had in my Cleage photos and often wondered what the occasion was.  It was a program in honor of J.L. Cook, founder of the Athens Academy.  I had no idea that my grandfather’s sister, Josie Cleage, was a member of the first graduating class.  That is my grandfather below, on the far right wearing a white suit.  You can read more about Dr. Cook here – The Church and School that Jake Built.  Click to enlarge article and photos. 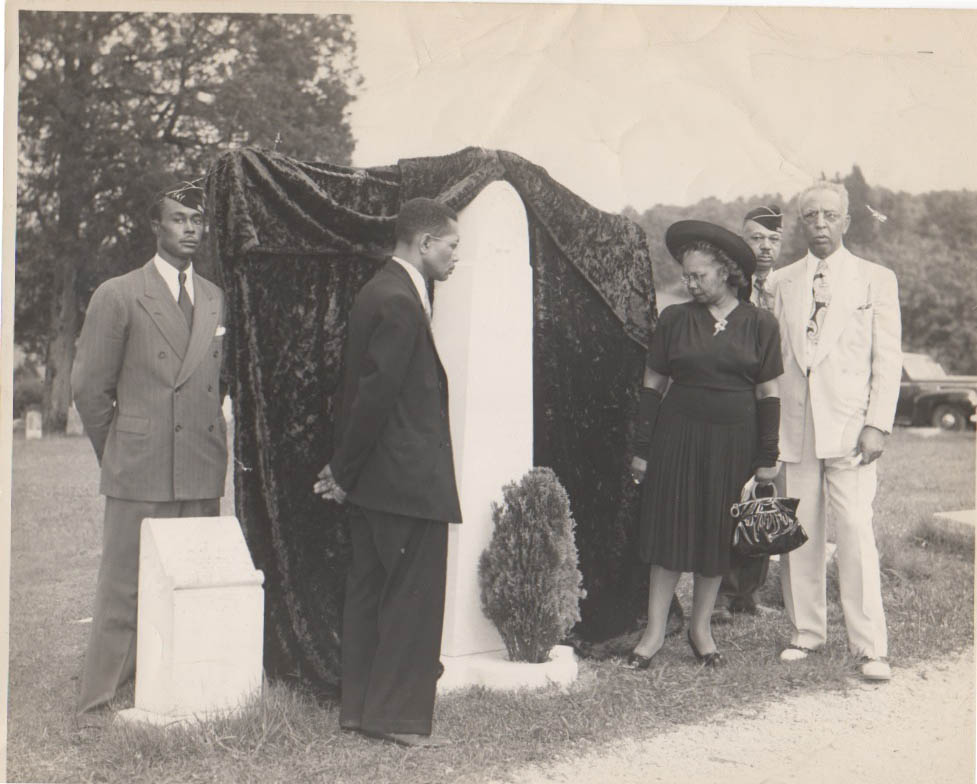 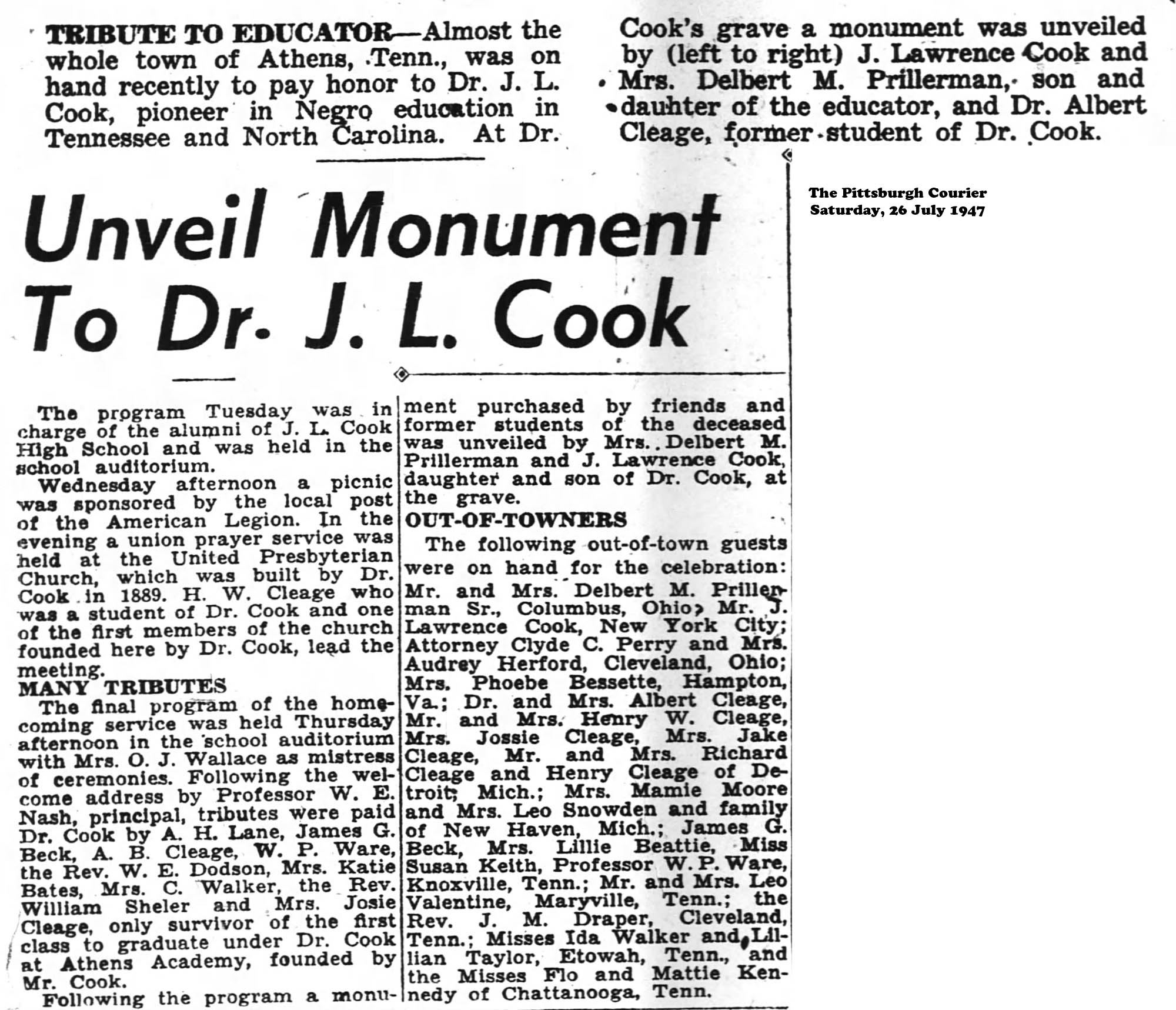 These Photographs were taken during the same trip.

Susan Rice Regan is the earliest name I can call for this line. She was born into slavery about 1833 in Virginia and later brought to Tennessee. She gave birth to two sons and three daughters. Her sons were Henry Rice and Philip Ragan. Her daughters were Anna Celia Rice, Sarah Sallie and Mollie Ragan.

Her daughter Anna Celia Rice, my paternal paternal grandmother was born into slavery in Virginia or Tennessee about 1855. Celia had 4 sons, including my grandfather Albert, and 1 daughter, Josephine (also called Josie). MtDNA is passed from the mother, to the daughter, to the grandaughter to the great grandaughter in a straight line. Although sons receive their mothers MtDNA, they do not pass it on to their children. Their children will receive their own mother’s MtDNA. So, I am going to be talking about daughters of daughters in this post.

Josephine married James Cleage, (from a different Cleage family)  and had 5 children, 2 sons and 3 daughters, Henrietta, Lucille and Hattie Ruth. My cousin Felix, a descendent of Hattie Ruth, shared a chart of family members with me about five years ago.  There are probably more family members out there since then. Additions and corrections welcome!

Henrietta had 1 son and 3 daughters, Margaret, Hortense and Ruth. I don’t have any information about their children.  Lucille had 2 sons and 1 daughter, Mary, who had 1 son only. Hattie Ruth had 5 daughters, Vivian, Betty, Beverly, Marion and Erma.

Vivian had 2 daughters, Josephine and Laura. She had 7 grandchildren, 11 great grandchildren and 1 2xgreat grand at the time I received my list.. I don’t know  how many were daughters. Josephine had 2 sons.  Laura had 5 children, 2 boys and 3 girls. She has at least 2 granddaughters.

Beverly had 1 son and 2 daughters, Tanya and Kim.  Tanya has 1 daughter, Danelle.  Kim has 2 daughters, Mahogany and Celeste.

Marion had 2 sons and 2 daughters, Alma and Ruth Anne. There were 5 grandchildren, but I don’t know how many were daughters of daughters.

Erma had 3 sons and 7 daughters, Beatrise, Marcella, Haleema, Fatima, Aleah, Ameena, Leshia. I don’t know the breakdown of her 16 grandchildren, but I know there were some granddaughters.

*****
Special thanks to my cousin Denora for permission to use the photograph above of Hattie Ruth’s daughters, granddaughters and great grands.  And to Felix for the information in the chart. And to Tanya for getting her DNA tested.  Family makes it happen.

Josephine “Josie” Cleage was my grandfather Albert B. Cleage’s older sister and today I will tell what I have learned about her.

Josephine Cleage, who was always called Josie, was born in 1873 in Louden County, Tennessee.  She was the first child of Louis and Celia (Rice) Cleage. In the early years, Louis worked on a farm and Celia kept house. Eventually there were four younger brothers – Henry, Jacob, Edward and Albert.   Josie’s father Louis was remembered as a drinker who didn’t always bring his pay home. He started working on the railroad and several years later her parents went their separate ways.

In September  1894, twenty year old Josie married 22 year old James Cleage. Although they were both named Cleage, it was not because they were related. Josie’s family was enslaved on Alexander Cleage’s plantation while James Cleage’s family was enslaved on David Cleage’s plantation. James’ parents were Jerry Cleage and Charlotte Bridgeman. You can read more about them here -> Jerry Cleage and Charlotte Bridgeman and here -> Jerry Cleage, A Slave for Life

Both were born  after the Civil War. Their first daughter, Henrietta was born in 1897 with second daughter Lucille following in 1899.

In April of 1897 Josie’s mother, Celia, married her second husband William Roger Sherman of Athens, Tennessee. By 1900 the whole family was living in Athens. Josie, now 27, and her family were living next door to her mother, step-father and brothers. Husband James, 29 was teaching school.  According to the 1900 census Josie was able to read and write.

Sometime after 1890 Jacob Lincoln Cook, founded the Athens Academy. James Cleage was one of the small group of dedicated educators that worked with him and taught there in the early years. In 1900 J.L. Cook was appointed president of Henderson Normal Institute in Henderson, North Carolina. James also went to North Carolina and began teaching at the Institute. In 1901 Josie and James first son, James Oscar, was born there. My grandfather, Albert, lived with his aunt’s family while he was attending high school at Henderson Normal. He graduated in 1902.   By the time Albert David (called David) was born in 1907, the family was back in Athens, Tennessee, but not for long.

By 1905 Henry and Jacob Cleage had relocated to Indianapolis, Indiana and in 1908 James, Josie and their growing family joined them there. Their youngest daughter, Hattie Ruth was born in Indianapolis in 1909.  James worked a porter and later at a printing shop.  Josie stayed home and raised the children and kept the house.

Both James and Josie were active in Witherspoon Presbyterian Church. I found these short items in the Indianapolis Star “News of The Colored Folk” during 1911.

March 11, 1911
Officers of the Witherspoon United Presbyterian Church entertained its members at the church at a banquet Tuesday night.  Dr. H.L. Hummons was toastmaster.  Addresses were made by Henry and James Cleage, Mrs. Lillian T. Fox and Mrs. M.A. Clark.

My uncle Henry Cleage remembered family visits to Indianapolis during the summers. He said his Aunt Josie was a real intellectual who read a lot and could talk about a variety of topics. He also remembered catching fireflies and that someone in the family had a goat. My aunt Anna Cleage Shreve remembered her uncle James as a very quiet, gentle man who helped around the house. Uncle Edward’s daughter Juanita Cleage Martin wrote in her memoirs that she remembered her aunt as being tall with a pleasant smile, easy going with a lot of hair.

Josie’s children all finished several years of high school and then got married or started working or both. Lucille seems to have been the first to relocate to Detroit where her uncles Albert, Jacob and Henry settled. After Josie’s husband James A. Cleage died in 1933, Josie also moved to Detroit.  In 1940 she was living not far from her brothers with her son David and his family on Stoval.

Josephine Cleage died in July of 1956 at age 82 and is buried in Detroit  Memorial Park East Cemetery.