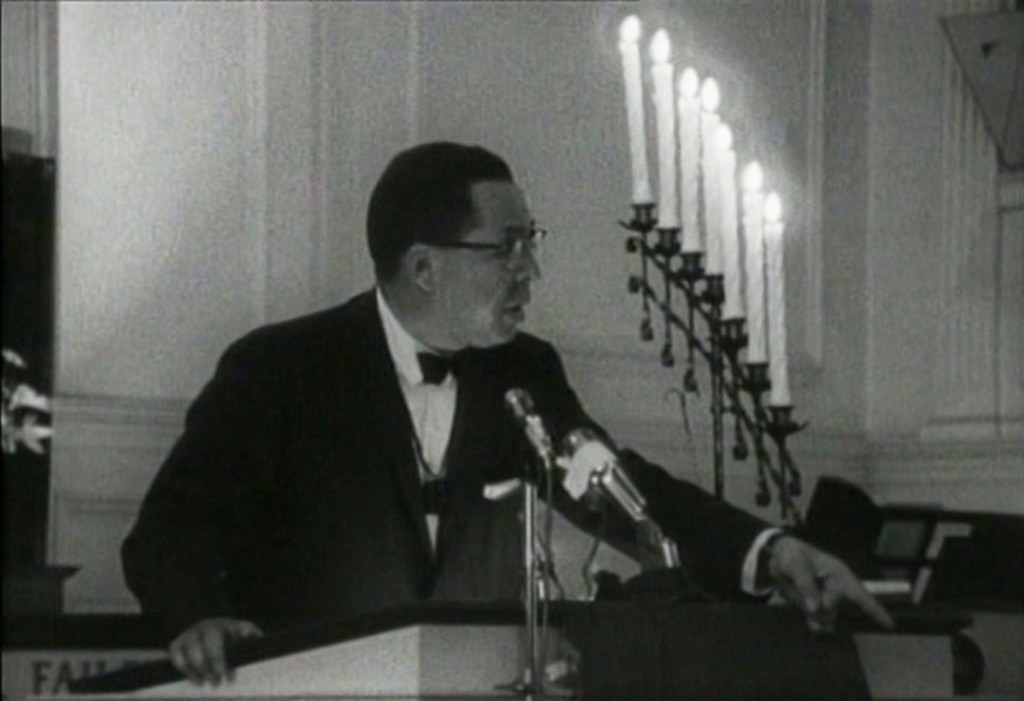 As Christmas approaches, I remember my father’s sermons from that time of year. Here is the Sunday Bulletin for Sunday, December 11, 1966, the sermon notes, a flyer for an evening program held the same day and one of the songs sung by the Choir that day at Central United Church of Christ, Detroit.  The sermon notes, bulletin, etc. for Dec. 25, 1966 are here – A Christ To Carol. 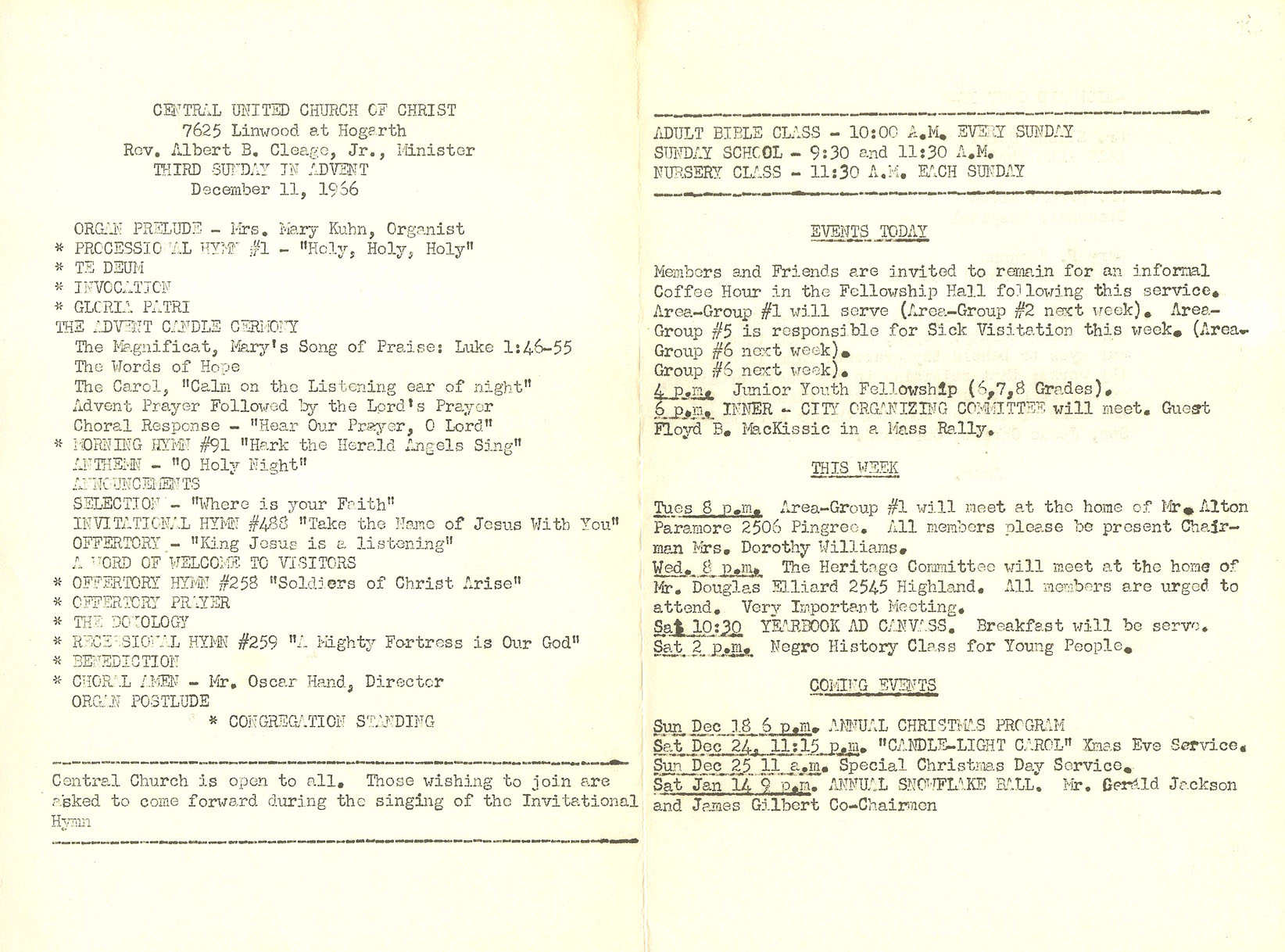 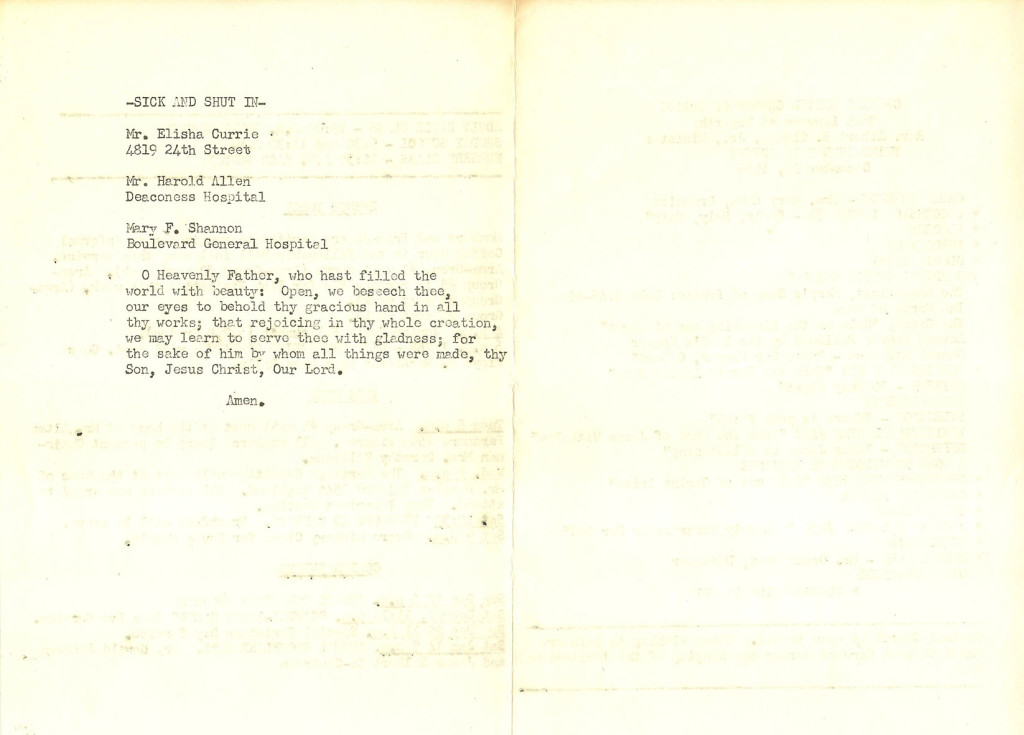 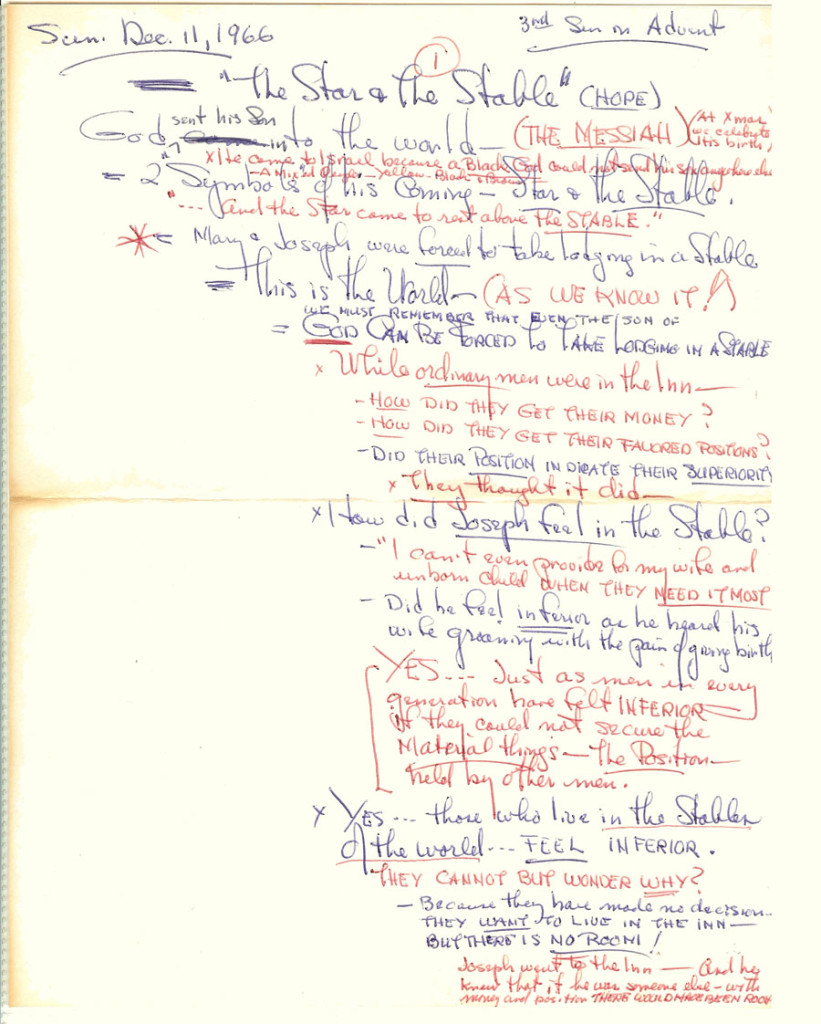 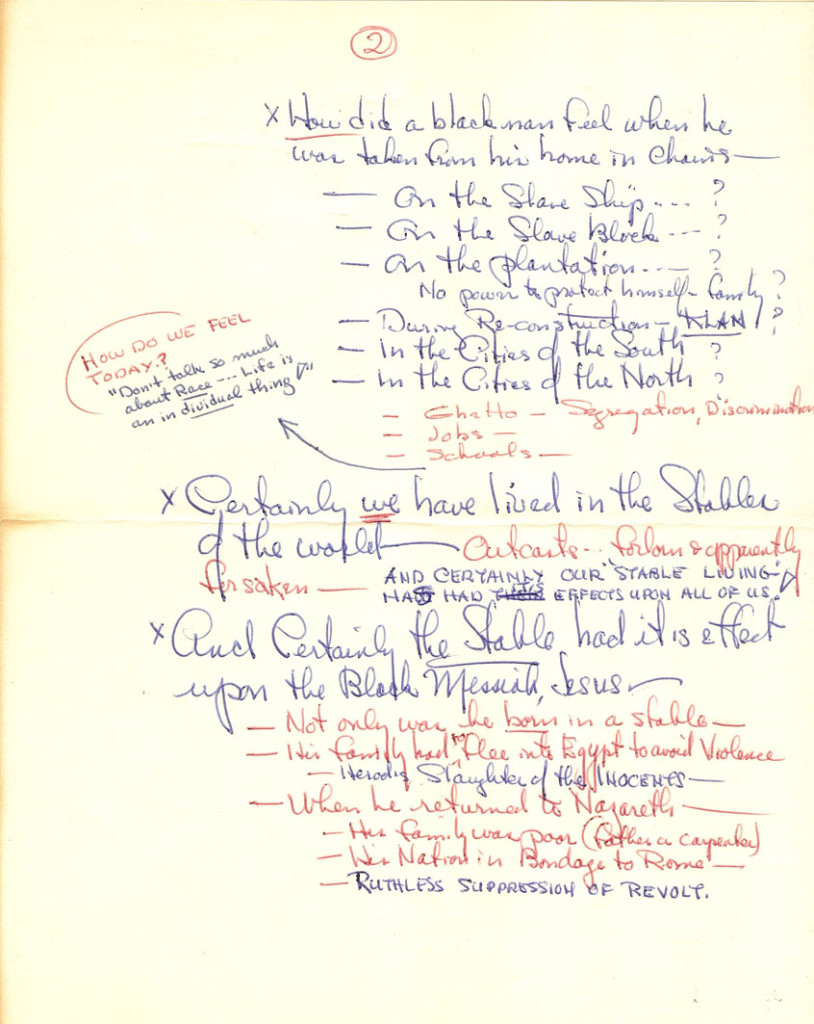 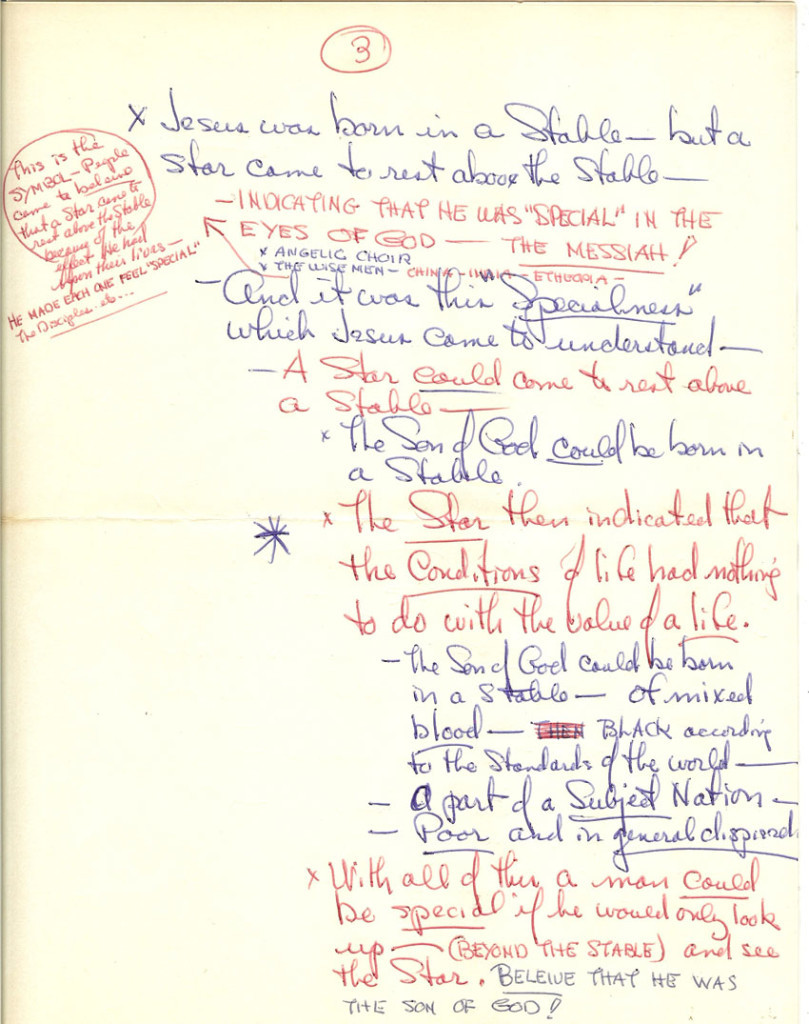 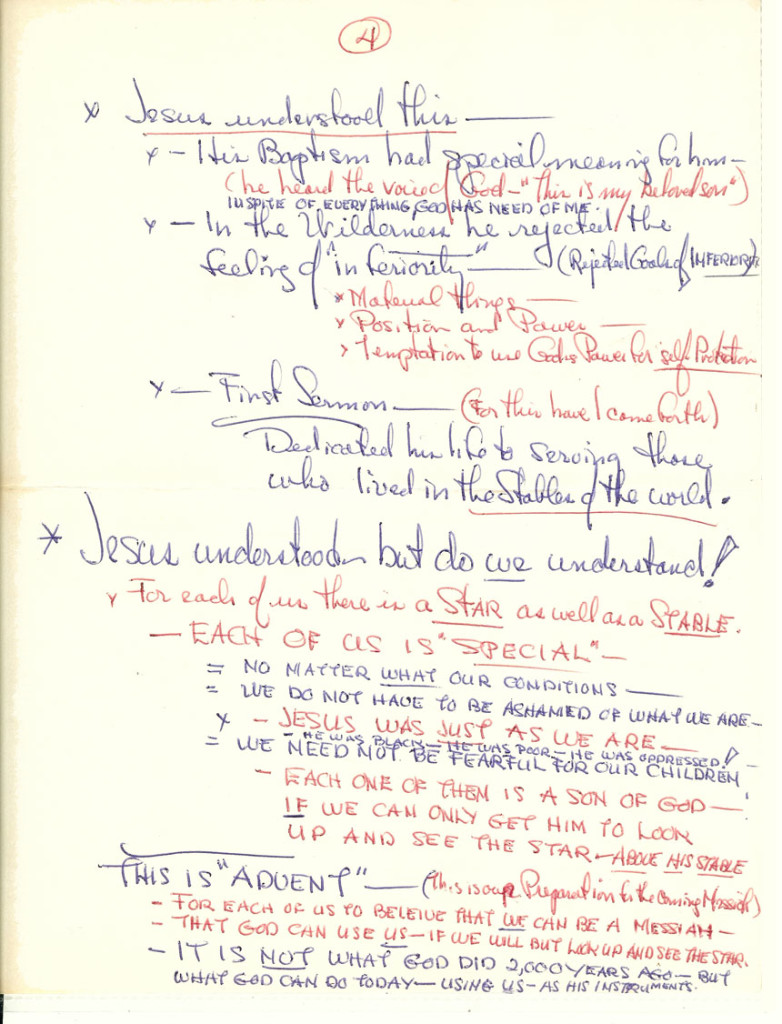 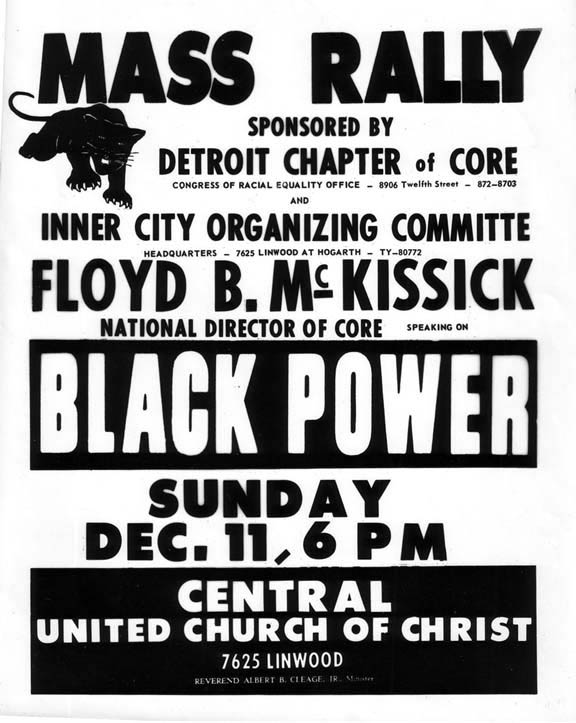 In the 1950s, when my sister and I were in elementary school, my grandmother took us downtown to Kresge’s to pick out a mother’s day present for our mother. My grandfather must have driven us, because my grandmother didn’t drive. She suggested an apron. We picked out a beautiful red one with black binding trim around the edges and a picture of an old fashioned cast iron stove on the front pocket. I still remember going down the dark wood stairs to the basement and picking out that apron.  As we grew older we realized that my mother hated receiving gifts that had anything to do with housework. (Click this link to see a photograph of the store Kresge on Woodward Ave. in Detroit, 1950s.)

My grandmother often had an apron on when we were over because she would be cooking or washing dishes.  She kept them on even when posing for group photographs in the yard with out of town visitors. 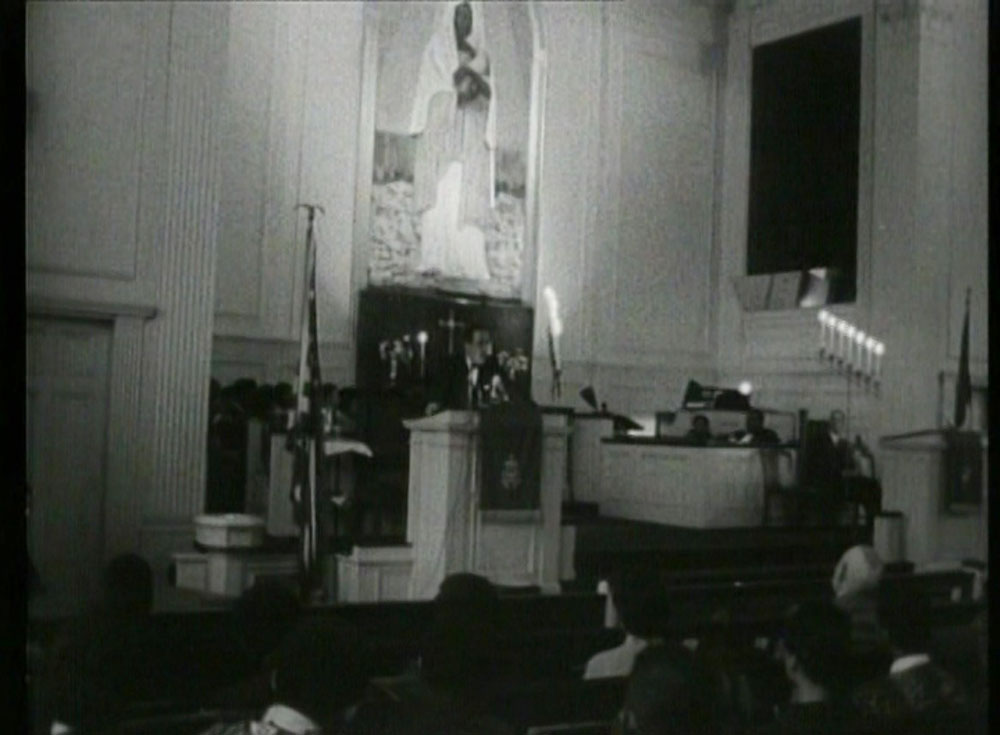 These are my father, Rev Albert B. Cleage Jr/Jaramogi Abebe Agyeman’s sermon notes for New Year’s Day of 1967.   I also included the bulletin for that day and one of the songs sung by the choir.  The painting of the Black Madonna and child in the photograph above was not yet painted on New Year’s day.  It was painted during the spring of 1967 and unveiled on Easter Sunday of that year.  The Detroit riot/rebellion occurred during the summer of 1967. 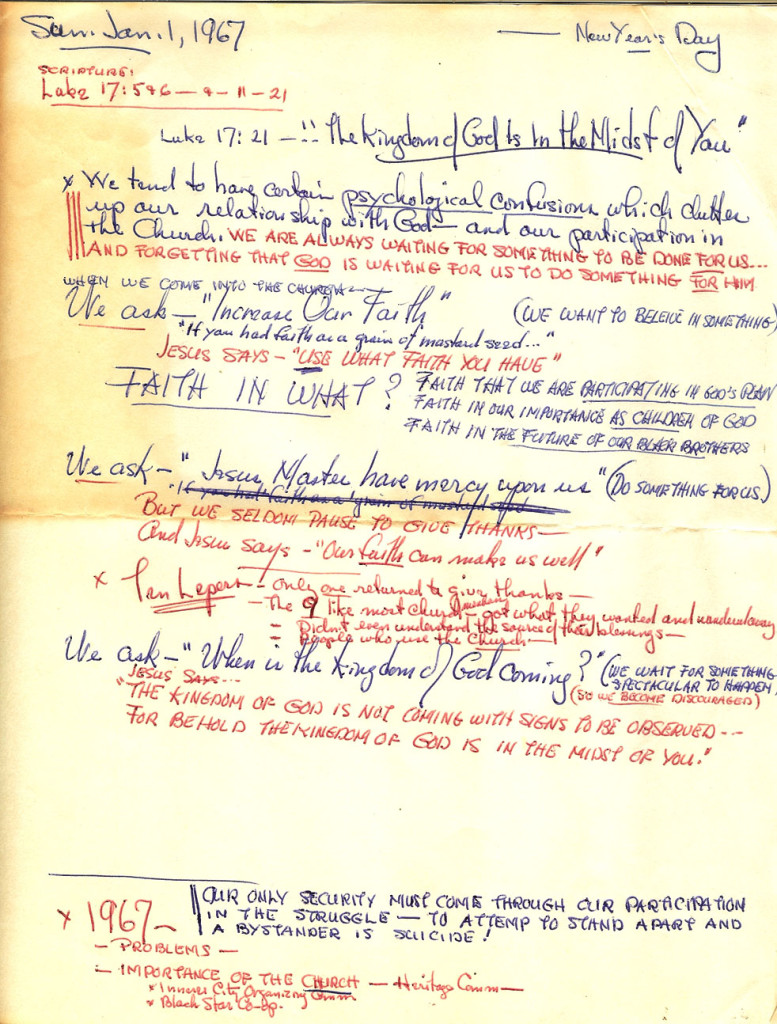 Sun. Jan. 1, 1967   – New Year’s Day
Scripture;
Luke 17: 5 & 6  – & – 11 – 21
Luke 17:21 – “The Kingdom of God is in the midst of you”
xWe tend to have certain psychological confusions which clutter up our relationship with God – and our participation in the Church.  WE ARE ALWAYS WAITING FOR SOMETHING TO BE DONE FOR US…When we come into the church –
We ask – “Increase Our Faith”  (We want to believe in something)
“If you had faith as a grain of mustard seed…”
JESUS SAYS – “USE WHAT FAITH YOU HAVE”
FAITH IN WHAT?
Faith that we are participating in God’s planFaith in our importance as children of GodFaith in the future of our Black Brothers
We ask – “Jesus Master have mercy upon us” (Do something for us.)

But we seldom pause to give thanks –
And Jesus says -“Our faith can make us well”
Ten Lepers
– only one returned to give thanks –– The 9 like most church members got what they wanted and wandered away.-Didn’t even understand the source of their blessings –-People who use the Church –
We ask – “When is the Kingdom of God coming?” (We wait for something spectacular to happen) (so we BECOME DISCOURAGED)
JESUS SAYS—
“THE KINGDOM OF GOD IS NOT  COMING WITH SIGNS TO BE OBSERVED —
FOR BEHOLD THE KINGDOM OF GOD IS IN THE MIDST OF YOU.”

x 1967 – OUR ONLY SECURITY MUST COME THROUGH OUR PARTICIPATION IN THE STRUGGLE – TO ATTEMPT TO STAND APART AND A BYSTANDER IS SUICIDE! 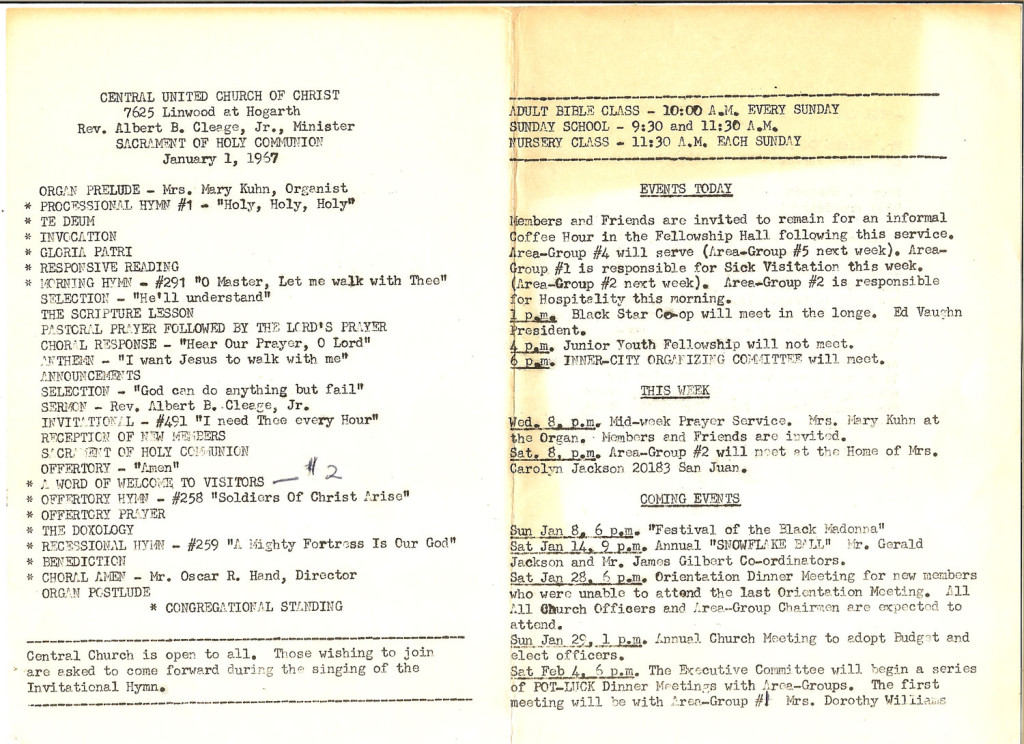 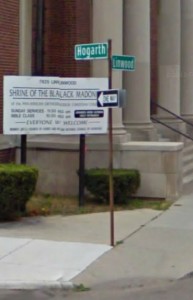 The church still stands on the corner of Linwood and Hogarth in Detroit.  It has gone through several names through the years, beginning as Central Congregational Church in 1953. It became Central United Church of Christ after the merger of the Evangelical and Reformed Church and the Congregational Churches in 1957. In 1967, after a large mural of the Black Madonna was painted for the Sanctuary, it became the Shrine of the Black Madonna.  My father was the minister.  I am going to write about my memories from the 1960s as I was growing up.

I remember many hours spent at church.   There were church suppers and political meetings. There were Christmas Eve services, Christmas caroling and my father’s annual “Little Patricia” Christmas sermon. He gave these for several years. They featured a little girl living in a cave with her family following a nuclear war. I think the last time he gave this sermon she had two heads. I remember a bazaar with booths of handmade items to buy as gifts and game booths with a shooting gallery. The year I remember best was 1962, during the Cuban Missile Crisis of late October.  A nuclear war seemed all too possible. I was 16.

I remember Youth Fellowship meetings, where we talked about what was happening in the city, and around the country.  Afterwards there was a social hour. Standing next to the coke machine and not being asked to dance, while at the same time, dreading being asked to dance, is not one of my happier memories. Social hour became less stressful once a ping pong table was added for those of us who didn’t dance much. I remember Workdays for Christ where we spent the day doing yard work to raise money for international service projects. And the “Friendship Circle” where we held hands and sang camp song like “Tell Me Why The Stars Do Shine” and “A Friend on Your Left and a Friend on Your Right”.

I remember the choir director, Oscar Hand (far right above) singing  and the time he held the door open for someone stealing a typewriter because he thought it was the repair man. There was a wonderful production of “South Pacific” one year. There was the tragic and shocking murder/suicide of two married choir members.  They had been having a clandestine affair.  Mostly though I remember the good singing Sunday after Sunday.

There were lots of church dinners. All members were organized into Area Groups that raised money and sponsored events for socializing. Sometimes Area Groups  sold dinners  to take out.  I remember one such sale.  Nobody was coming in to buy the dinners until one of the women suggested burning onion skins. They laughed about it, but someone burned some onion skins and people actually started to come. 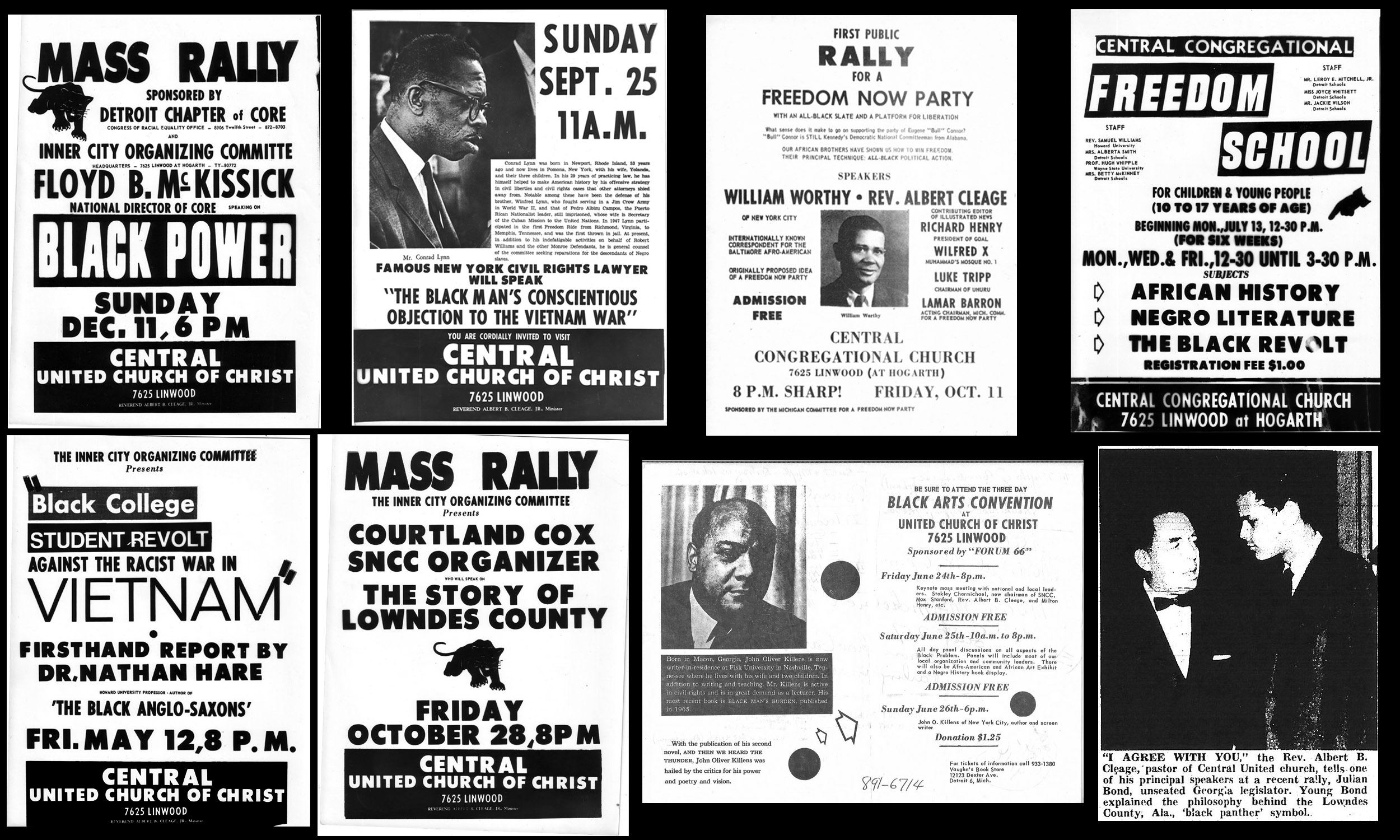 The Church was fully involved in the movement for equal rights and black power. There were always speakers and rallies and seminars.

My parents divorced when I was 8. We lived with my mother but often spend the weekends with my father. He would start writing his sermons Saturday night.  He wrote at the kitchen table.  There were piles of old mail, old sermon notes and who knows what, piled up at one end of the table. There was enough space for the three of us to eat and for him to write. He wrote late into the night, sometimes taking breaks to come in and comment about what we were watching on TV or to order some shrimp from Jags up on 12th street. He never finished the sermon on Saturday. Sunday morning he would get up early and continue writing until the last minute when we would get in the car and drive down Linwood to church.  Sometimes there were slow drivers in our way or people had already parked in his usual spot so he had to park farther away.  At that time, he always parked on Lamothe, which was what Hogarth was called on the other side of Linwood. Service started at 11.   Sunday morning excitement – would we make it!? We always did.

The bulletin and sermon notes below are from Sunday, July 3, 1966. 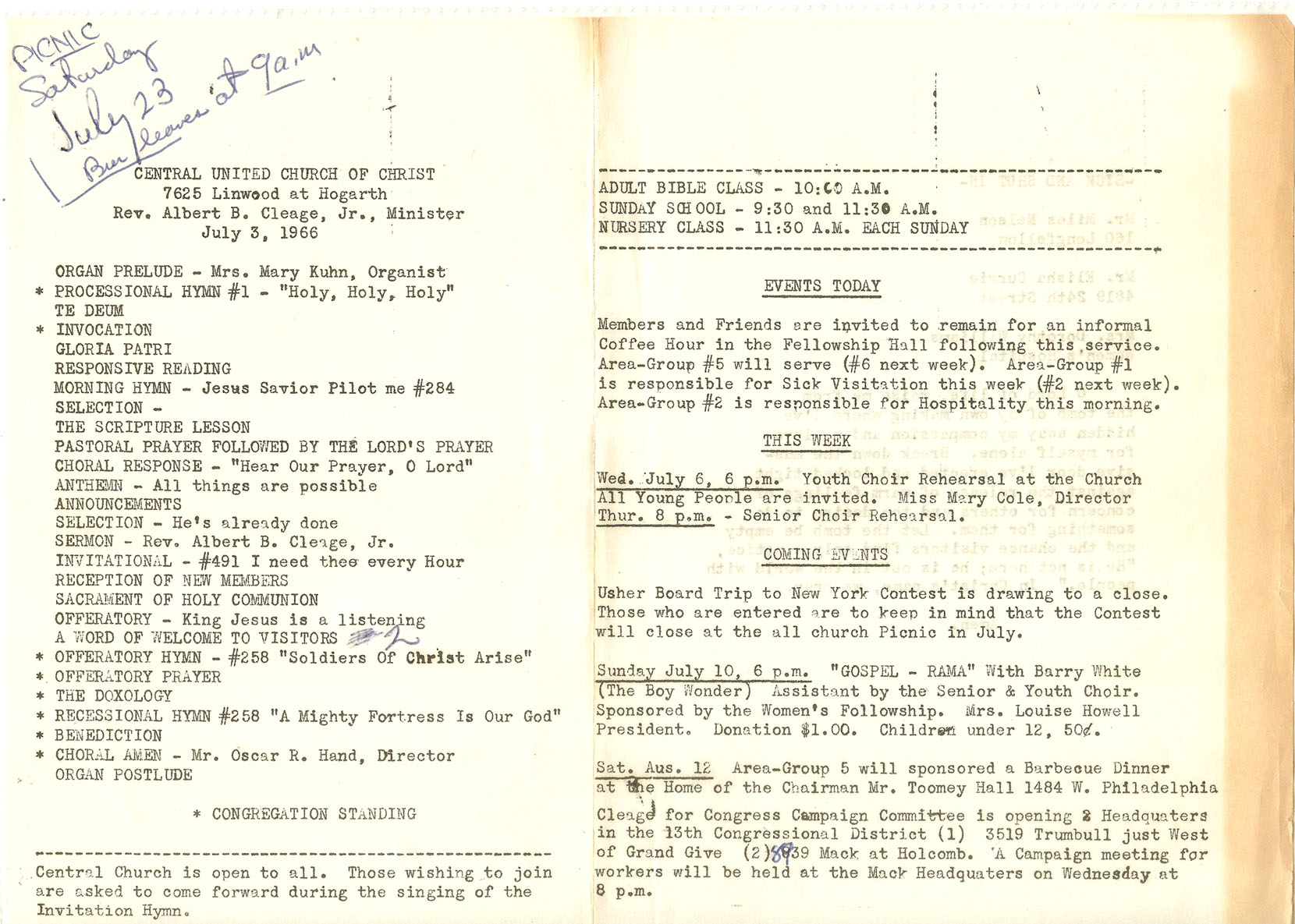 His sermons always spoke to what people needed to understand about their lives in the present day. And they were always timely. Someone once asked me if he planned and wrote them maybe weeks or months ahead of time. He didn’t. And you could tell because of the current issues he always included.