On Sunday, February 9, 2009 my daughter, Ife and I drove over to Montgomery, AL. It’s only a 2.5 hour drive from Atlanta.  She had to pick up some art work and I wanted to see if the store my Grandmother Fannie managed before she married was still standing.  I also wanted to find Eliza and Dock Allen’s graves in Oakwood Cemetery.

First we picked up the art.  The artist’s husband gave us directions to the cemetery and the store.We found the cemetery easily.  It was open and there was a man walking into a little office near the entrance.  Ife parked and I went in and showed him the information I had, a location for the grave site of Victor Tulane.  He told us to follow him to the place we could look.  it was out of that one and around a few blocks and over the tracks to the newer part of the cemetery, which he drove up into, us following. He finally stopped and said it should be there in, that area, waving vaguely around.

Ife and I got out and started looking.  There were old graves, some newer ones from the 60’s and even 70’s and some from the 1800’s.  we walked up and down hills and probably over graves and couldn’t find it.  He came back with a map and asked if we’d looked further down.  So we went in that direction. I told him I had some death certificates and asked if he could tell me where the graves were located if I gave him the names.  He said I should bring them up to the office and he would copy them and look in the file. 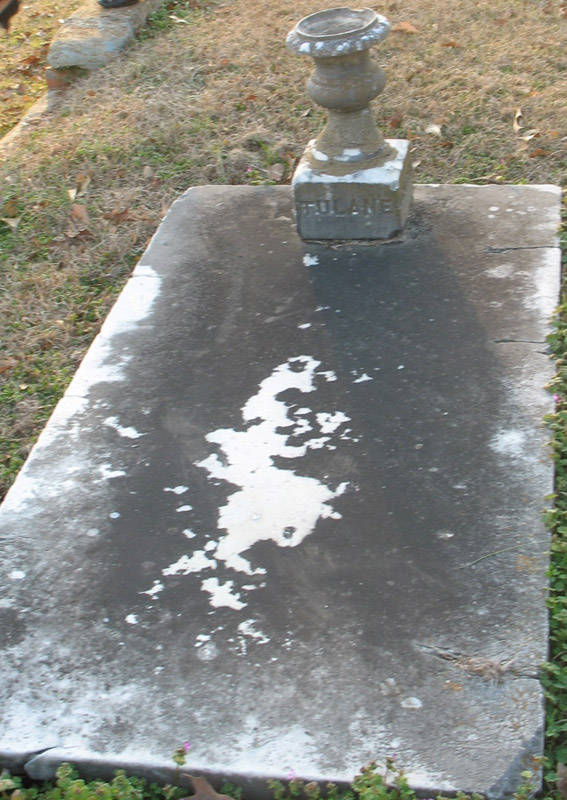 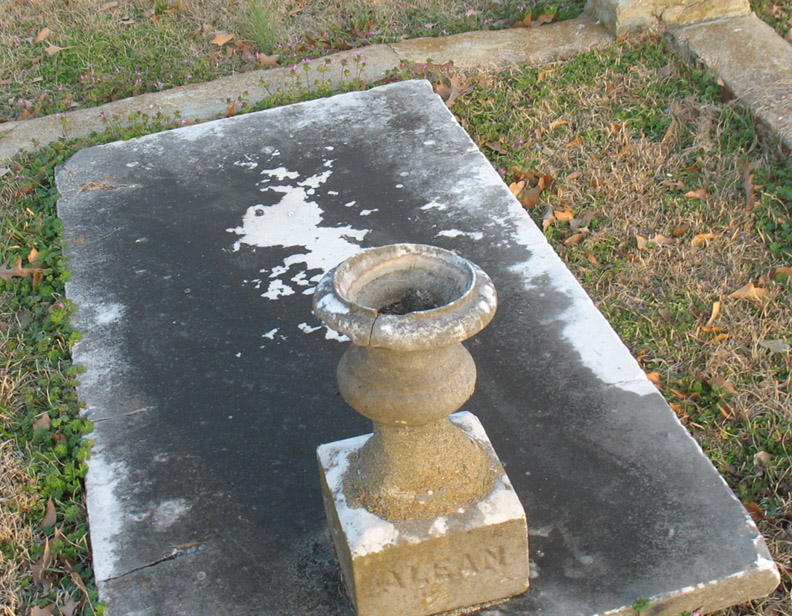 We continued to look and finally Ife saw this grave with the name we were looking for “Tulane”. It was a child’s grave. On the other side it said “Alean”. She looked next to it and there was the grave we had spent all that time looking for. We had walked by that place several times but there was an upright grave marker that said “Ophelia M. Peterson” so we just went by without looking at the flat, cement slab, which was the grave we were looking for. I still don’t know why Ophelia’s stone is right up above it or who she was. 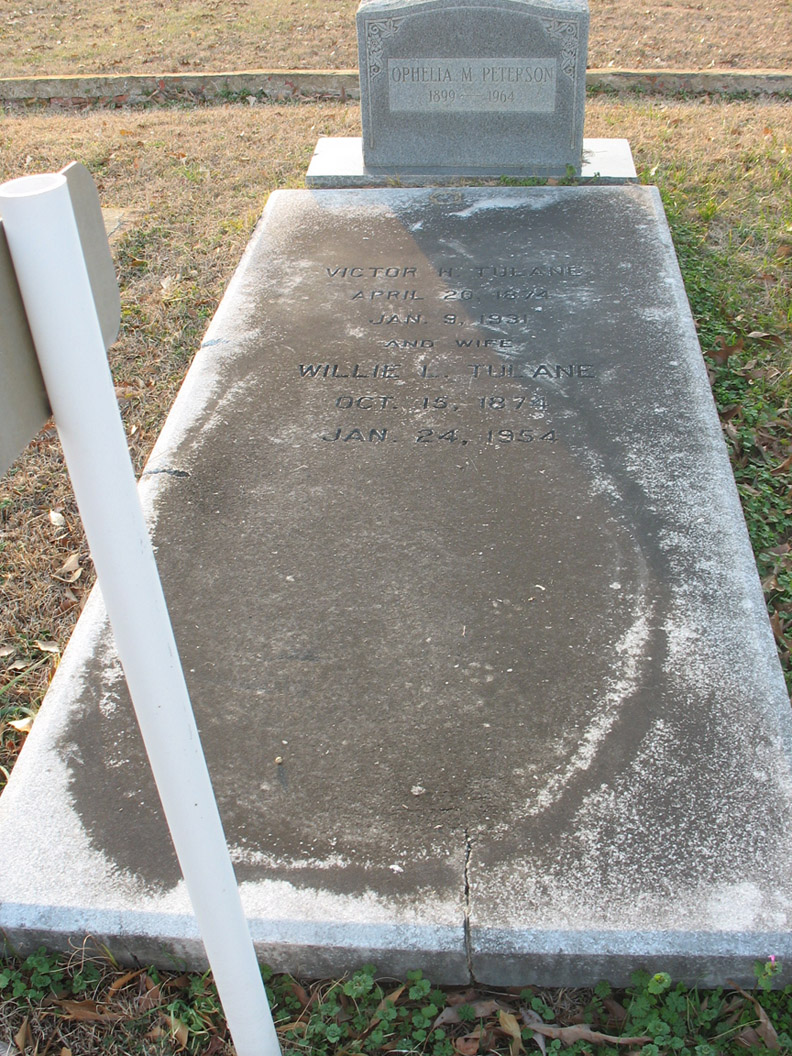 We then went up to the office and I took my death certificates in.  He copied them and asked if he could copy Dock Allen’s photograph, which I had stuck in the mylar pocket with the death certificate.  After making copies, he got out his file drawers and found Victor Tulane and two children, age 2 and 10 months.  My mother used to talk about how spoiled their daughter Naomi was, but she never mentioned or maybe even knew that they had lost two babies. I think that might help explain the spoiling.  He found Dock and Dock Allen (father and son) and Eliza.  He said they were buried on that side in Scotts Free Burial Ground – when it started they let people bury for free.  He drove ahead of us and showed us the section where the graves were and we walked around and finally found the grave marker for Dock and Eliza.  We regretted not bringing flowers or something to leave but we hadn’t expected to even get in. 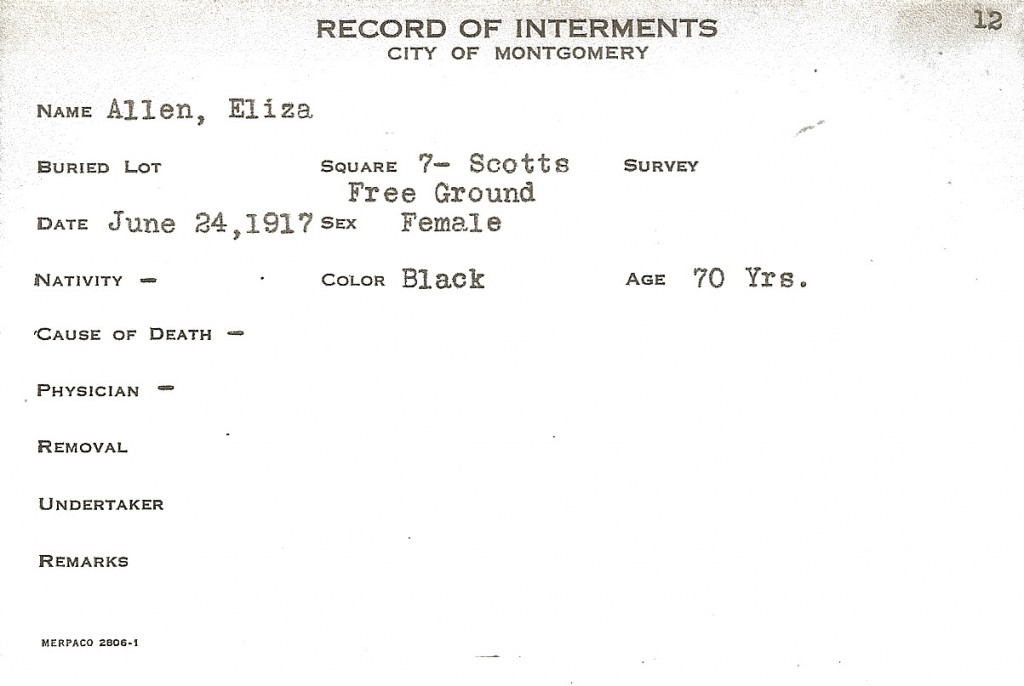 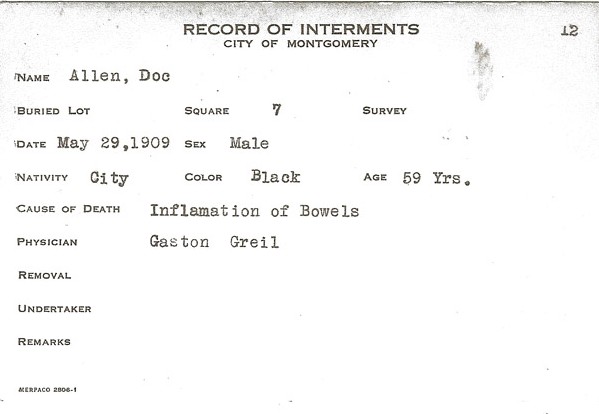 As we were leaving the Cemetery, wishing we had brought some flowers or an offering of some kind, I noticed a name out of the corner of my eye, “Sallie Baldwin.” It was like finding another relative. A cousin of a cousin and I spent weeks, months figuring out how our families connected and about her relatives. Her mother  was alive then and kept giving us information that my friend didn’t believe but it always turned out to be true. James Hale, a well known and well to do black Montgomery businessman contemporary with the Tulanes, was her son-in-law and is buried here also.

When we left the cemetery we drove down Ripley Street towards the store. Ripley runs next to Oakwood Cemetery.  The block where my grandmother and her family lived with Dock and Eliza Allen is now paved over for parking lots and government buildings. The store is still there and looking good.  I feel that it’s time for another trip to Montgomery.