Recently I went to the nearby Family Search Center to look at some Lowndes County Alabama property records from the 1870s on microfilm. I hoped to find more details about  Joe and Emma Turner, my 2X great grandparents. I also planned to look at records for other formerly enslaved Turners mentioned in Wiley Turner’s probate record.

There were five rolls of microfilm waiting for me. It was by no means a large research center.  It is actually a few rooms in the educational part of the Church of Latter Day Saints. In a small room there were three computers. Next to it was another small room with a microfilm machine. A local Family Search volunteer opened the building for me and got me started. She loaded the roll into the reader, showed me how it worked and advised me to put a phone book under a piece of paper if the document was hard to read. Then she went to the next room to work on her family history.

After scrolling through to page 238, which I thought was the page I was looking for in Book H, I discovered that there was nothing about the Turners on that page, nor on the pages before or after. I scrolled back to the index. At this point the scrolling was making me feel slightly motion sick but I chewed some gum and kept going. Looking at the index, I found the Turners listed with the “Ts” under a letter “O” on page 97. Very confusing. However, that was actually the page I was looking for and it was full of information about the land deal. There was even a drawing of the property that changed hands. I took photos of the various pages, not very good ones it turned out.

As the next roll of film was being loaded, a thin belt separated from wherever it was supposed to be.  The microfilm machine was broken. It was the only machine there and it was ancient. The volunteer said she will try to get it repaired and call me when it is. She also said I can keep the rolls of film there as long as I need them. That is only good if I have a machine to view it through.

Family Search plans to digitize all of their records during the next two years.  They also plan to discontinue sharing microfilm in August of this year. I do not hold out much hope for the repair of the machine, unless a local volunteer can do it.   Below is what I found. 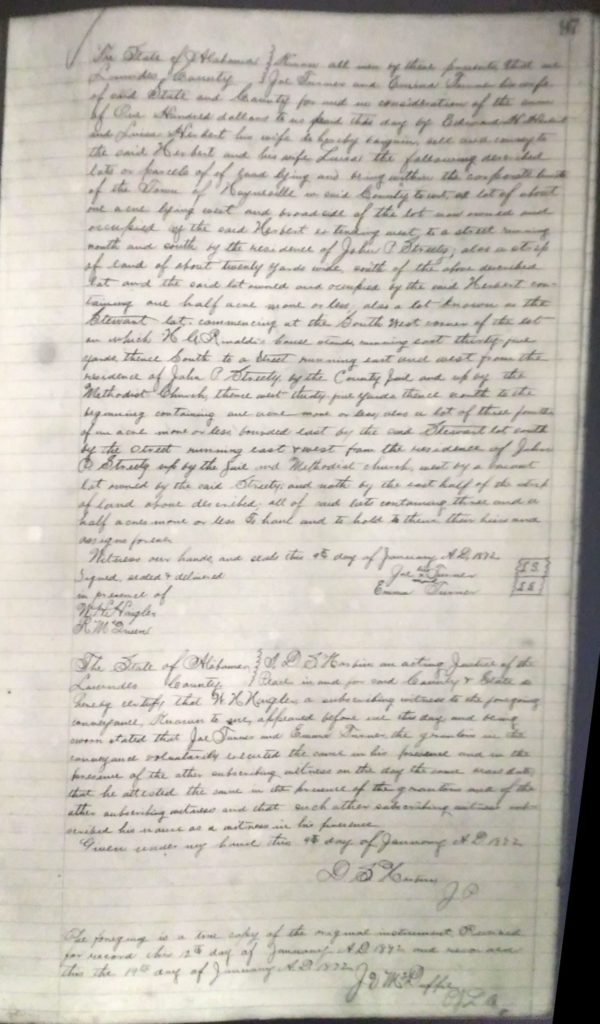 Know all men by these presents that we, Joe Turner and Emma Turner his wife of said state and county for and in consideration fo the sum of one hundred dolars to us paid this day by Edward H. Herbert and Louisa Herbert his wife do hereby bargain, sell and convey to the said Herbert and his wife Louisa the following described lots or parcels of land lying and being within corporate limits of the town of Hayneville in said county to wit a lot of about one acre lying west and broadside of the lot now owned and occupied by the said Herbert extending west to a street running north and south by the residence of John P Streety, a lot a strip of land about twenty yards wide south of the above described lot and the said lot owned and occupied by the said Herbert containing one half acre more or less; also a lot known as the Stewart lot commencing at the south west corner of the lot on which H a Rinadi’s house stands, running east thirty five yards, thence south to a street running east and west from the residence of John P Streety by the County jail and up by the Methodist Church, thence west thirty five yards thence north to the beginning containing one acre more or less, also a lot of three fourths of an acre mor or less bounded east by the said Stewart lot south of the street running east and west from the residence of John P Streety up by the jail and Methodist Church, west by a vacant lot owned by the said Streety and north of the east half of the strip of land above described; all of said lots containing three and a half acres more or less to have and to hold to them and their heirs and assigns forever.

Witness our hands and seals this 9th day of January AD 1872.