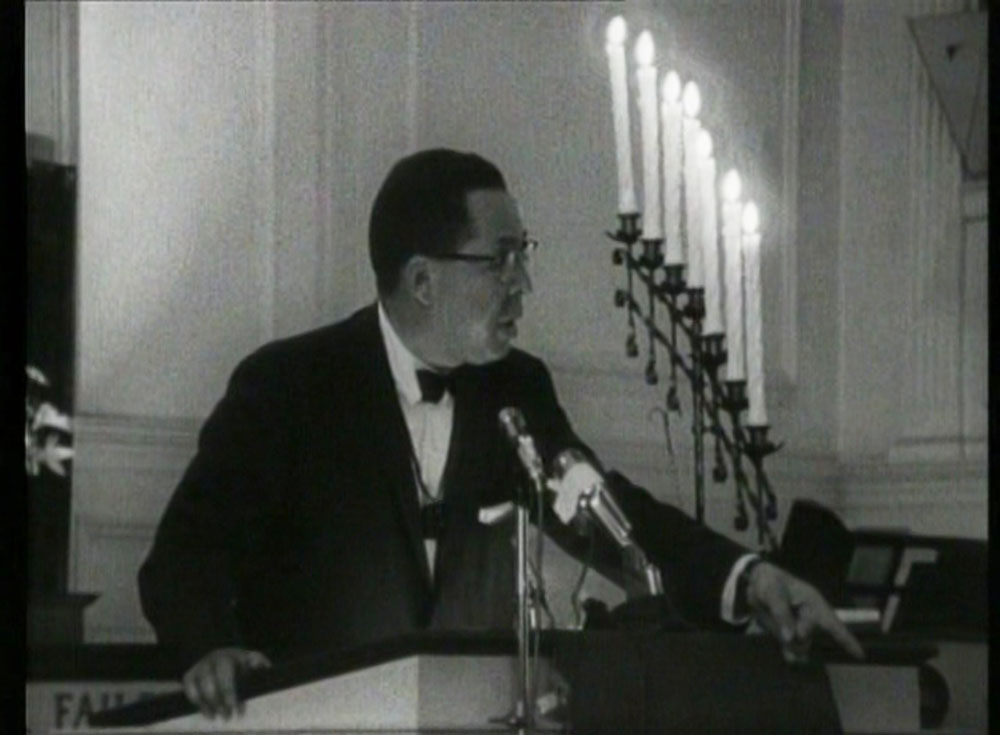 Introduced and edited by Paul Lee

This installment of our series on the ’67 Detroit Rebellion is the first not to be drawn from the records of the National Advisory Commission on Civil Disorders, or Kerner Commission, which President Lyndon B. Johnson established on July 28, 1967, to uncover the causes of the annual urban uprisings and make recommendations on how to prevent or contain future disorders.

Unlike the reports, surveys and interviews submitted by commission field investigators and consultants in the wake of the uprisings, written, compiled and conducted to present “a fair and accurate picture of what happened” and lead to the formulation of new government programs, initiatives and experiments, the following document offers a decidedly partisan, pro-black analysis of the complex social and psychological roots of the rebellions and their potential to help bring about fundamental social changes.

Voice of the Black Nation

This penetrating and provocative analysis was offered by a 56-year-old veteran of the civil-rights and Black Power movements in Detroit:   Jaramogi Abebe Agyeman, then known as the Rev. Albert B. Cleage, Jr., the bold, charismatic and visionary black nationalist pastor of Central United Church of Christ, formerly Central Congregational

On Easter Sunday, March 26, 1967, he launched the Black Christian Nationalist Movement, later church, known as BCN, and unveiled a striking 18-foot chancel mural of a Black Madonna and child.   He called upon black people to reconnect with the African roots of Christianity, “resurrect the historic Black Messiah and stop worshipping a white Jesus who never existed” — thus making him the father of the black-liberation theology movement

Seeing no distinction between the sacred and the secular, he worked to bring the black church to the center of the burgeoning liberation struggle, believing that the only real security for black people was to build counter-institutions and a counter-culture — a “black nation within a nation.”

Central church was formally renamed Shrine of the Black Madonna #1 in 1970.   In the early 1970s, two satellite churches were established in other parts of Detroit and churches were later founded in Kalamazoo, Mich., Atlanta, Ga., Houston, Tex., and Beulah Land, S. C., near Calhoun Falls.

Jaramogi Agyeman, who was interviewed at least four times by Kerner Commission field investigators, adopted his African name in 1972 and the BCN Church was succeeded by the Pan African Orthodox Christian Church (PAOCC) in 1978.

When the Rebellion occurred, he was the divorced father of two daughters:   Kristin Cleage, who recently directed the organization of the vast, Detroit-based Jaramogi Abebe Agyeman Archives, and Pearl Michelle Cleage, a noted essayist, novelist, poet and playwright, both of Atlanta.

Almost alone among political and religious leaders, commentators and social scientists during that period, Jaramogi Agyeman’s analysis saw the Detroit Rebellion, which was the most destructive to date, as a “logical” outgrowth of the modern civil-rights and Black Power movements.

Also exceptional was the fact that, unlike most moderate black leaders, he refused to blame such uprisings on or denounce black “hoodlums.”   Indeed, he frontally challenged what sociologists termed the “riffraff theory” that the uprisings were the handiwork of a tiny “criminal element” among African Americans.

It examined the Aug. 11-16, 1965, rebellion in the mostly-black Watts district in Los Angeles, which was ignited by reports of police brutality following the arrest of an inebriated black motorist.

Jaramogi Agyeman’s analysis was made in a sermon delivered on Sunday, July 23, 1967 — only hours after the rebellion broke out following an early-morning police raid on a “blind pig,” or after-hours drinking establishment, near the corner of 12th Street (now Rosa Parks Boulevard) and Clairmount on Detroit’s near west side.   The incident coalesced years of frustration and outrage over police brutality and other social injustices.

According to Kris Williams, “My father never read his sermons. After writing them out, he rarely even referred to his notes.”   Longtime Shrine member Sala Adams recalls that he allowed himself to be led by “the overflow,” as he called it, in which he spoke freely and often powerfully from the spirit.

On the morning of the Detroit uprising, it appears that he intended to address the recent rebellions in Newark, N. J., Kalamazoo and East Harlem, N. Y., which he referred to in his sermon.

This made it easy for him to incorporate the fast-escalating events on 12th Street even before the press was ready to describe what was happening as a “riot.”   The media felt bound at first by an informal agreement with the authorities to delay reporting the outbreak until the police could get it under control. But the agreement became unsustainable as the first reporters began arriving on the scene.

At 11:00 a. m., about the time that Jaramogi Agyeman began his sermon, Detroit Free Press reporter William (Bill) Serrin called assistant city editor Wayne King from a store on 12th Street.   “Wayne, there’s a riot going on out here. …”   King heard glass breaking in the background.   “They just heaved a brick through the window,” Serrin explained, then hung up.

Unlike most Detroit and Michigan leaders, Jaramogi Agyeman had seen the handwriting on the wall years before the explosion occurred.   He even correctly forecast what might trigger it.

“Yes, I’m afraid that there might be violence in Detroit,” he said in reply to a question by a British Broadcasting Corporation (BBC) television reporter in November 1965, four months after the Watts revolt.   “I think you cannot continue to press a people without eventually some perhaps unforeseen accident sparking violence, such as happened in Los Angeles.”

Indirectly addressing the widespread belief that Detroit was a “Model City” in terms of its administration and race relations under the liberal leadership of the youthful Mayor Jerome P. (Jerry) Cavanagh and would be an exception to the ever-growing tally of nationwide rebellions, he continued:

“I think that the night before the violence in Watts, anyone in Los Angeles would have said, ‘It seems relatively unlikely that there will be violence,’ but the conditions existed there and the same thing [was true] in New York last summer” — referring to the first of the great urban uprisings, which occurred in Harlem from July 18-23, 1964 — “and I think the conditions exist here: police brutality, poverty, increasing unemployment, poor education.”

In contrast to most “militant” black leaders and activists, he did more than forecast doom and destruction; he sought to provide a constructive alternative to violence.   In his view, the fact that violence did occur was due to the failure of the “white power structure,” which then controlled the city, to respond positively to his efforts.

“Do you think that your activities, your militancy, exacerbates rather than diminishes race tension?” the BBC reporter queried Jaramogi Agyeman in 1965.

“No,” he replied, “I think that my activities, my militant activities, are the only hope for peace in the city of Detroit.   I think in Los Angeles and Watts, the danger was that there was no militant leadership, that the masses of people, having lost all faith in middle-class Negroes, had no one to turn to.

“I think in the city of Detroit, we have constantly kept some positive program available for the masses of Negro people — political action, protest, demonstration — but always with the idea that there is a hope that we can find a peaceful solution to the problem and that violence in the streets is unnecessary.

“So I think that without my militancy we would be in exactly the same position that the Negro in Los Angeles was.   And I think I deserve more credit than the mayor for preventing violence in the city of Detroit because for a number of years I’ve given always a possibility for a positive program.”

During the 1960s, Jaramogi Agyeman was Detroit’s most outspoken advocate for black freedom, rights and dignity. He spread his message from the pulpit, rostrum and over the airwaves.

He wrote occasional articles for the militant Illustrated News, a small newsletter published by his family and friends, and a weekly column in The Michigan Chronicle titled “Voice of the Black Nation” in the wake of the Rebellion.

In an interview with The Michigan Citizen, Boggs explained that she took shorthand notes during Jaramogi Agyeman’s sermons on Sunday mornings and met with him Sunday evenings at the home of his brother Henry Cleage, an attorney, where “Rev.” looked over the text and made minor changes.   On Monday mornings, she submitted the finished product to the Chronicle.

Beginning on Feb. 4, 1968, WCHB-AM, then a black-owned radio station in Inkster, Mich., carried a weekly broadcast of Jaramogi Agyeman’s sermons and speeches, recorded by church member Ollie (later Omari) McKinney, under the same name as the Chronicle series.

As a leading member of the black nationalist Group on Advanced Leadership (GOAL), he led campaigns for quality education and economic self-help and against job discrimination, police brutality and the forced removal of blacks from the inner city, which the government termed urban renewal and many blacks called “Negro removal.”

He called for and helped organize the mammoth “Walk To Freedom” down Woodward Avenue, led by Dr. Martin Luther King, Jr., on June 23, 1963, and was a co-convener of the historic Northern Negro Grass Roots Leadership Conference, held at Mr. Kelly’s Lounge and King Solomon Baptist Church on Nov. 9-10, 1963, which featured a momentous keynote address by Malcolm X, then the national representative of Elijah Muhammad’s Nation of Islam.

He was also a pioneer in independent black politics.  In 1961-62, he organized the famous “5 Plus 1,” “3 Plus 1” and “4 and No More” campaigns to support black candidates for elective office.

In 1964, he made an unsuccessful run for governor on the mostly-black Michigan Freedom Now Party ticket. He also made unsuccessful bids for the Detroit Common (later City) Council in 1965 and the Detroit Board of Education and the U. S. House of Representatives (13th District) in 1966.

Following the Rebellion, he considerably expanded his influence as the chairman of three organizations:   The Inner City Organizing Committee (ICOC), which was essentially the political arm of his church, the Citywide Citizens Action Committee (CCAC) and the Federation for Self-Determination (FSD), two short-lived united-front groups that sought to bring about the “transfer of power” in Detroit from whites, who then held it, to African Americans, who were becoming the majority.