Steamer Eastern States
Aug 9 – ’09
…”I am sorry that your mother is not well and I trust that ere this she is in health and spirit what you would have her be.
Have seen several people from Indianapolis whom I know among them were Drs Hummons & Atkins who were in Detroit the other day enroute to Niagra Falls and Toronto.  To see them come and go makes one homesick.
Sweetheart is real late and I m tired and sleepy will write you a long sweet letter next time.

With much love I am
your
Albert 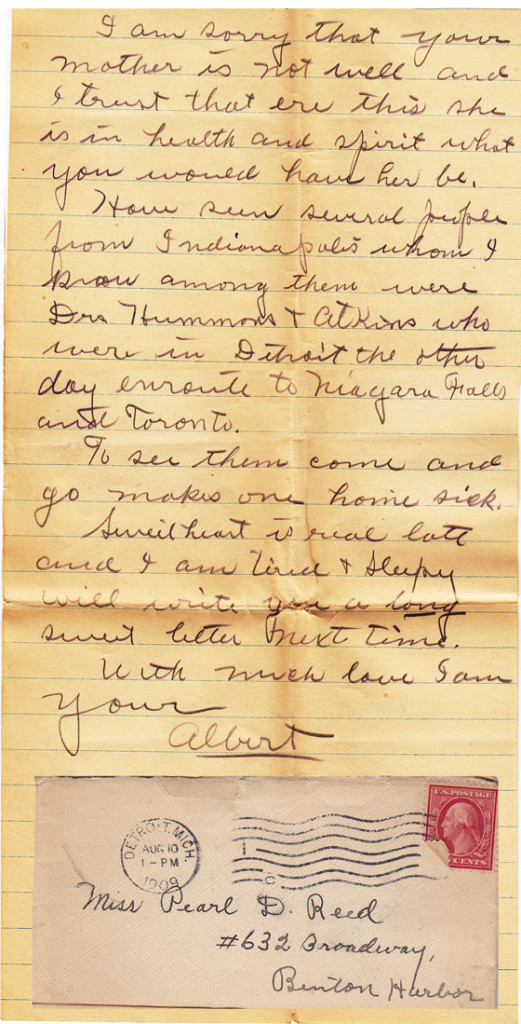 In this letter Albert wrote to Pearl in Benton Harbor, MI, where she has gone for a summer visit.  Two of her older sisters, Sarah Reed Busby and Louise Reed Shoemaker lived there with their families.

“Dr. Henry Lytle Hummons (M.D., Med. Coll. Ind. ’02) of Indianapolis, Indiana, died on April 5, 1956 after a prolonged illness. He was 83. Dr. Hummons was born in Lexington, Kentucky on February 25, 1873, the son of Thomas and Mary Ellen Hummons. He received his early education in the local public schools and graduated from Knoxvillle College in 1896. In that year he came to Indianapolis, and later entered the old Medical College of Indiana from which he received the M.D. in 1902. He served an internship in Shelbyville Hospital in 1903 and entered practice in Indianapolis in that year.

He was long active in medical, civic and church activities.  In 1919 he established the city’s first free tuberculosis clinic at Flanner House.  he was one of the co-founders of the Senate Avenue branch of the Y.M.C.A.  With the aid of Mr. Henry Cleage, he organized the Witherspoon United Presbyterian Church 49 years ago.  The Omega Psi Phi fraternity, of which he was a member, named him their “Man of the Year,” in 1953.  Also in 1953 he received a pin from the Indiana Medical Association in recognition of his 50 years service as a physician.”

17 thoughts on “H is for Henry Hummons”