This letter was sent while Albert was on the Steamer Eastern States during the summer of 1909 on July 15.  Pearl had left Indianapolis to visit her sisters in Benton Harbor, Michigan for the summer.  The hard times that he mentions were the result of her mother’s objection to their relationship. At the end he mentions a Vaudeville he attended. Click images to enlarge. 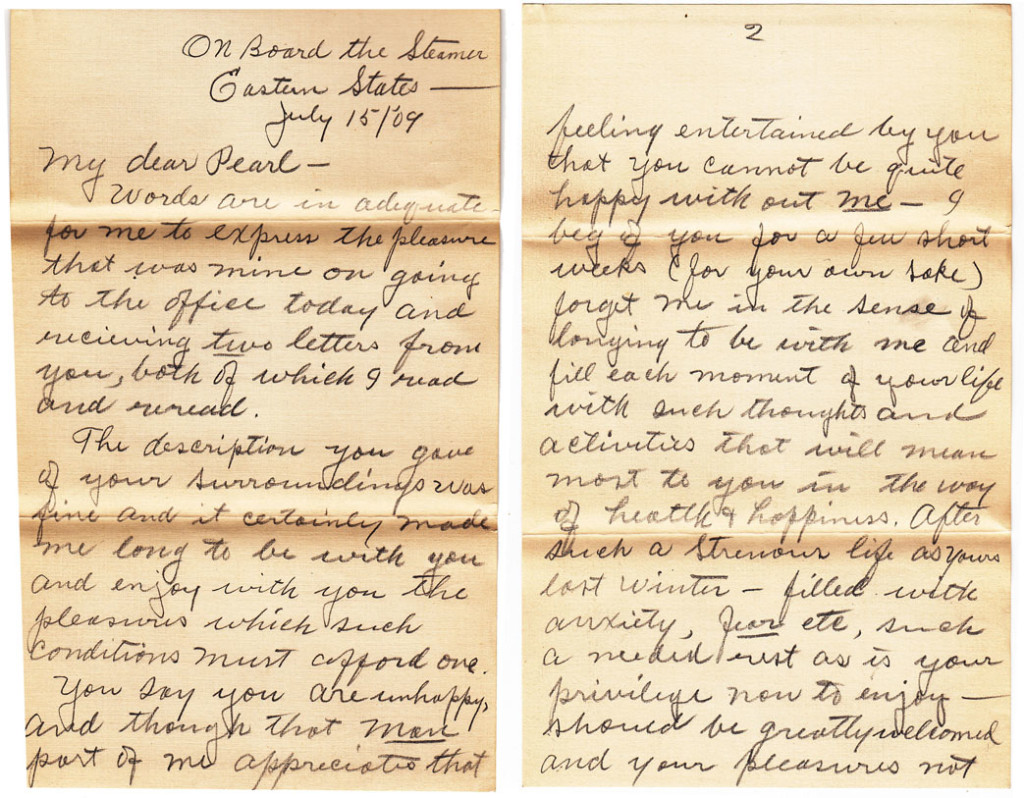 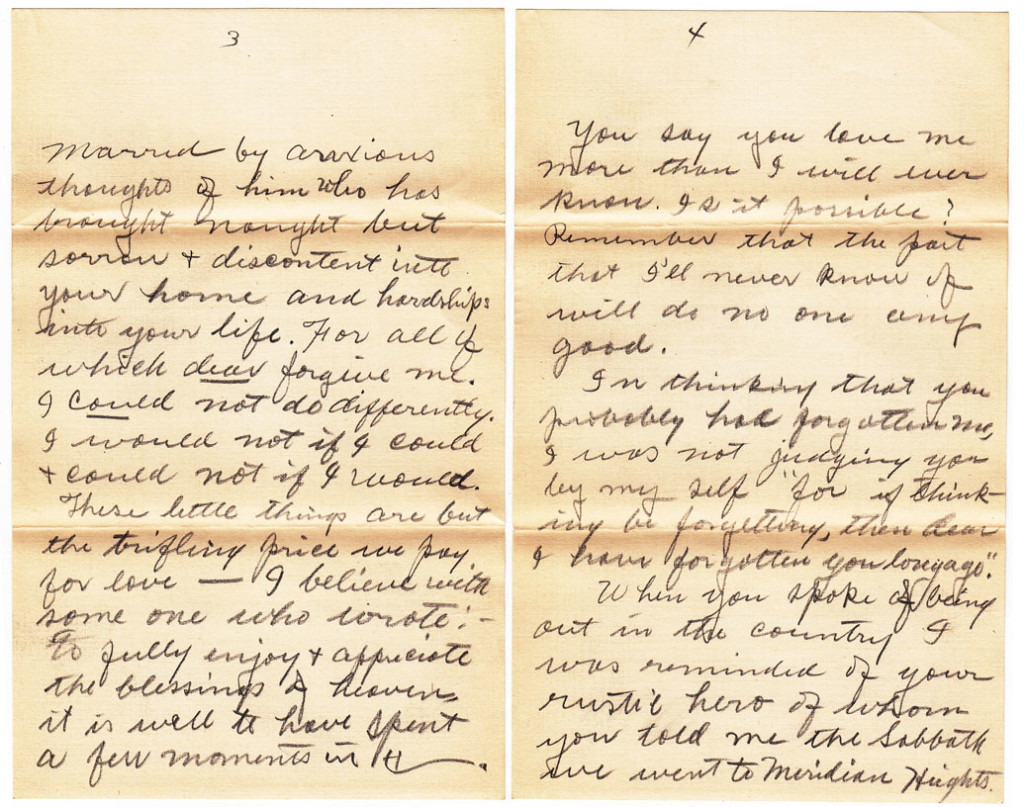 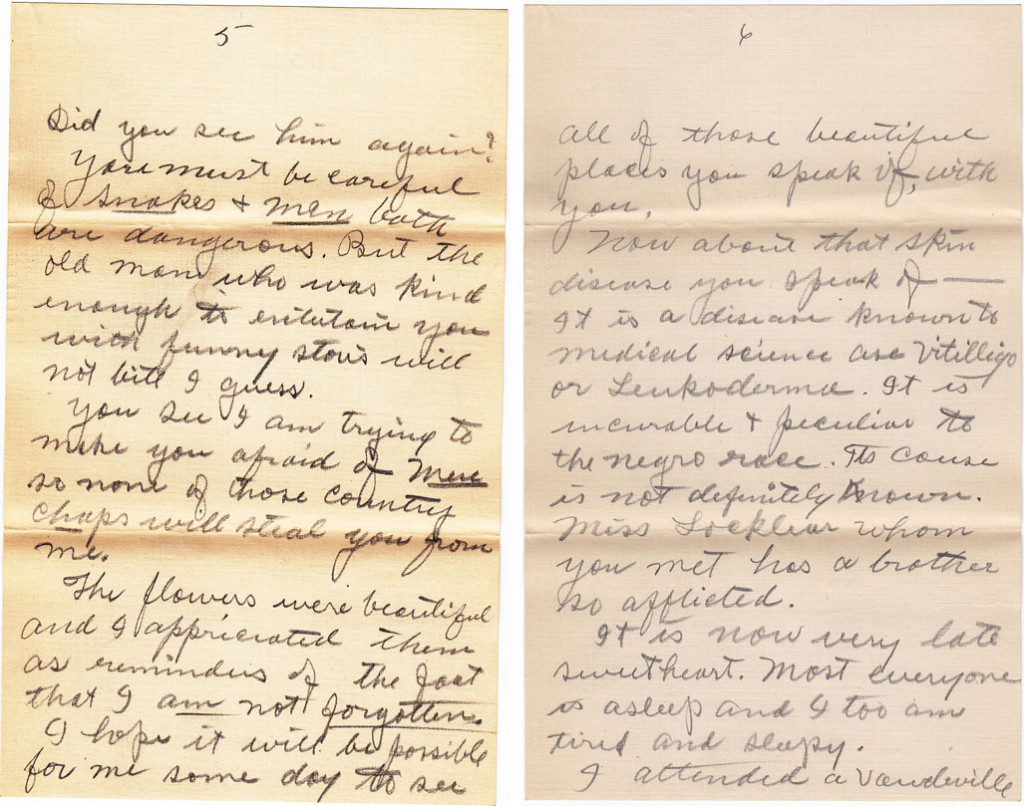 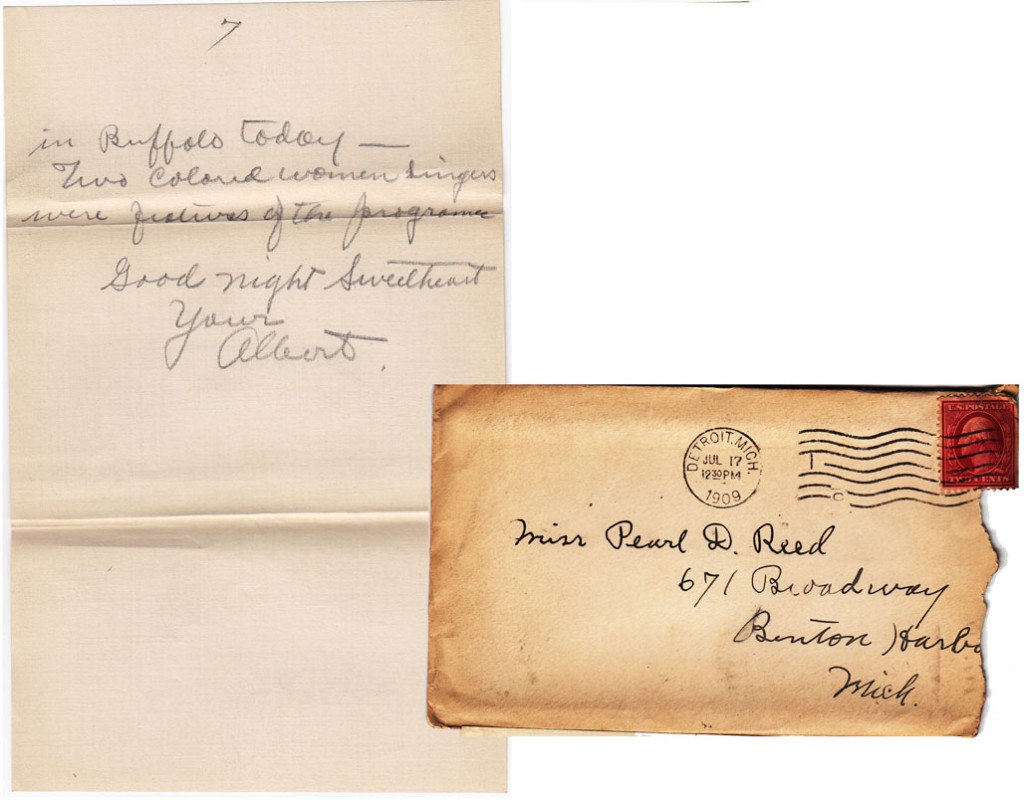 On Board the Steamer
Eastern States
July 15/’09

Words are inadequate for me to express the pleasure that was mine on going to the office today and receiving two letters from you, both of which I read and re-read.

The description you gave of your surroundings was fine and it certainly made me long to be with you and enjoy with you the pleasures which such condition must afford one.

You say you are unhappy, and though that man part of me appreciates that feeling entertained by you that you cannot be quite happy without me – I beg of you,  for a few short weeks (for your own sake) forget me in the sense of longing to be with me and fill each moment of your life with such thoughts and activities that will mean most to you in the way of health & happiness.  After such a strenuous life as yours last winter – filled with anxiety, fear etc, such a needed rest as is your privilege now to enjoy – should be greatly welcomed and your pleasures not marred by anxious thoughts of him who has brought naught but sorrow and discontent into your home and hardships into your life.  For all of which dear, forgive me.  I could not do differently.  I would not if I could and could not if I would.

These little things are but the trifling price we pay for love – I believe with someone who wrote: – to fully enjoy and appreciate the blessings of heaven, it is well to have spent a few moments in H___.

You say you love me more than I will ever know. Is it possible?  Remember that the part that I’ll never know of will do no one any good.

In thinking that you probably had forgotten me, I was not judging you by myself “for if thinking be forgetting, then dear, I have forgotten you long ago.”

When you spoke of being out in the country I was reminded of your rustic hero of whom you told me the Sabbath we went to Meridian Heights. Did you see him again?  You must be careful of snakes and men, both are dangerous.  But the old man who was kind enough to entertain you with funny stories will not bite, I guess.  You see, I am trying to make you afraid of men so none of those country chaps will steal you from me.

The flowers were beautiful and I appreciated them as reminders of the fact that I am not forgotten.  I hope it will be possible for me someday to see all of those beautiful places you speak of, with you.

Now about that skin disease you speak of – it is a disease known to medical science as Vitilligo or Leukoderma.  It is incurable and peculiar to the Negro race.  Its cause is not definitely known.  Miss Locklear whom you met has a brother so afflicted.

It is now very late sweetheart.  Most everyone is asleep and I too am tired and sleepy.

I attended a vaudeville in Buffalo today – Two colored women singers were features of the program.

Maybe he saw the famous Griffin sisters.  I found their picture while searching Indianapolis newspapers for news items about my family and found it again online in goggle news archives.  There are links to several news articles below. 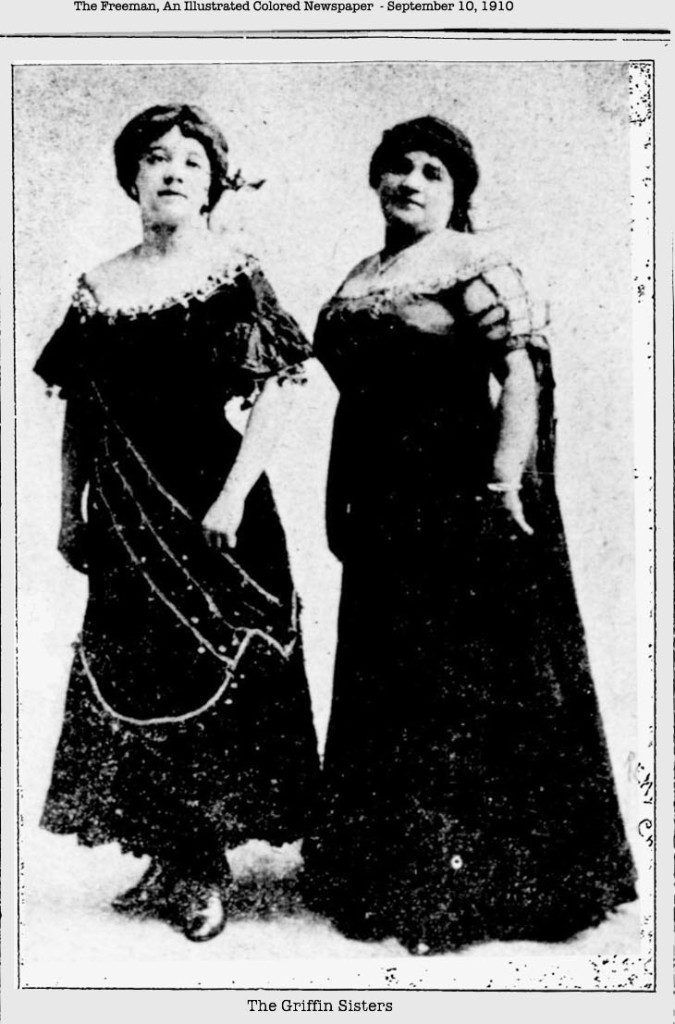 “Emma GRIFFIN DEAD; Ellis avenue. Miss Griffin died a Christian. Emma Griffin was born in Louisville, Ky., and was 44 years of age. She made her first appearance on the stage with her sister at Kohl and Middleton’s Museum, Chicago, when they were girls. Their first appearance as regular professionals was with John W. Isham’s original octoroon company, headed by Fred J. Piper and Madam Flower. When they had gained fame with the octoroons they entered into vaudeville and remained in that field and made money. When Mabel Griffin was taken ill at Youngstown, O., eleven weeks ago and had to return home ill, Emma took Margie Lorraine as a partner and opened at the Star Theatre, Pittsburgh, ten weeks ago, but broke down and returned home ill. Both sisters were bedridden in separate rooms during a period in which a benefit was given for them at the States Theatre of special pictures by Theda Bara. No performers appeared and the occasion marked the first theatrical “movie” benefit in history. Elizabeth Hart and Cassie Burch Slaughter conducted the benefit Miss Griffin was well educated, having been a student of the State University of Louisville. As an actress she was a comedienne of the May Irwin type and was a clever mirth provoker despite her avoirdupois. As an orator she had recognized ability, recently demonstrated in politics as a suffragette. The stand she took on behalf of the rights of performers against managers was well known. The deceased was a charitable woman and always interested in the welfare of her profession. Miss Griffin was the oldest child of Henry Griffin, deceased, and Blandina Duncan. The funeral was held Tuesday, September 3, and was largely attended.”

Grizzly Bear article 1910 – you can see the photo above and a short description of their act.

Griffin Sisters “The First and Only Colored Women’s Theatrical Booking Agency in the United States and their Desires and Intentions.” This was a very interesting article from “The Freeman” that went into depth about their lives, beliefs and careers. I recommend it!

7 thoughts on “V is for Vaudeville”