A Christmas card from my Grandparent’s ( Mershell and Fannie Graham) collection, date unknown.  I read on a post by Pauline on Family History Across the Seas  about the people who sent Christmas Cards. It started me thinking about the cards I had from my grandparents collection with photographs of people I only knew were friends of the family, but nothing else about them. I wondered what I could find out. I picked this one out because, unlike some of the others, it had a name and a street address, although there was no date and no city. My grandparents lived in Montgomery, AL before moving to Detroit in 1919, so I started there.  Here is what I learned from the census and Montgomery Directory about Addie Smith.

Addie was born in 1869 in South Carolina to parents also born in South Carolina. In 1888, (the year my grandmother was born), Addie married Fountain Smith, a laborer about 14 years her senior.  This was her first marriage. Fountain may have been married before.  They had no children. 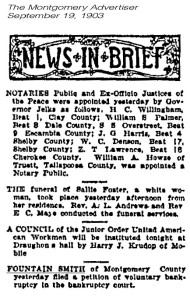 By 1906 Fountain and Addie were living at 105 Hutchinson Street in Montgomery. She would live in this rented house for the rest of her life.  A Fountain Smith filed for bankruptcy in 1906. Over the years Addie Smith worked as a char woman/janitress in the Post Office. She may have also worked in that capacity in other public buildings.

Looking at a map of the 4th Ward in Montgomery in I found that Hutchinson street no longer had houses below #800, However, my great Uncle Victor Tulane had a grocery store at Ripley and High street. My grandmother Fannie managed the store for a number of years before her marriage. This store would have been several blocks from Addie and Fountain Smith’s house. I am supposing that this is how they met.