I don’t remember hearing memories of childhood Halloween celebrations from my parents. I do have a few memories of my own. When I was about 7 years old and we lived in the parsonage at 2254 Chicago Blvd in Detroit, the Youth Fellowship met in the basement. They were having a Halloween party. I remember my sister and I watching them come in all dressed in various costumes.  I don’t know if it was the same year as this photograph was taken or not.

That same year we dressed up and went over to our cousin’s house to help distribute candy to the trick-or-treaters. I remember wearing my Aunt Mary Vee’s skirt and dressing as a Gypsy.  We never were allowed to go trick-or-treating, but enjoyed passing out the candy. When we were highschool age, we would sometimes leave town for the day to avoid the whole holiday and passing out candy by not being home.  I have no pictures of us in any Halloween costumes.

When my own children were old enough to know Halloween was happening, we did not live in the city. I remember my very young daughter’s going with the older neighbors up and down our short block trick-or-treating in Mt. Pleasant, SC. It was unseasonably cold and they had to wear winter coats over their homemade costumes.

We moved to Mississippi the next week, where we lived out in the country and there wasn’t any trick-or-treating, instead there would be an evening carnival at the school. The students would dress up and there would be booths with games and treats. In Excelsior Springs, MO I don’t remember my kids going trick-or-treating but two had paper routes and their customers gave them so much candy! Way, way more than anyone needed in a year.

The next move was to Idlewild, MI, in the middle of the Manistee National Forest. Some years there was a school carnival. Other years the kids went to town and trick or treated the 2 block business area. A couple of years my Aunt Gladys and Henry had a get together with cider and doughnuts for Halloween. The year when I was librarian at the Yates Township library we had a community party  with bobbing for apples, a fishing booth and refreshments. Here is an article about it from the Ruff Draft, our family newsletter. 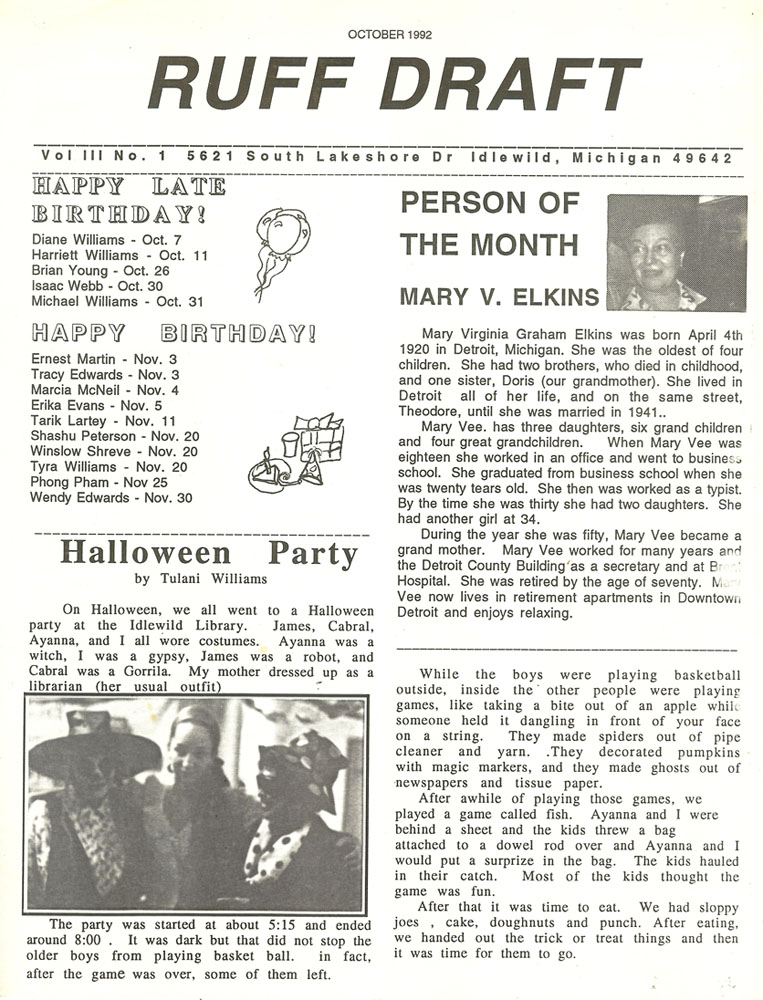 This post was written with both Sepia Saturday #201 and The Book of Me “Halloween” prompt in mind.