In March of 1953, a disagreement between my father, then known as Rev. Albert B. Cleage Jr., pastor of St. Mark’s Community, United Presbyterian Church and a group of members who were not happy with the direction he was was taking the church, came to a head. My father and 300 members of the congregation resigned and founded St. Mark’s Community Church, which several months later became Central Congregational Church and in the 1960s became the Shrine of the Black Madonna. 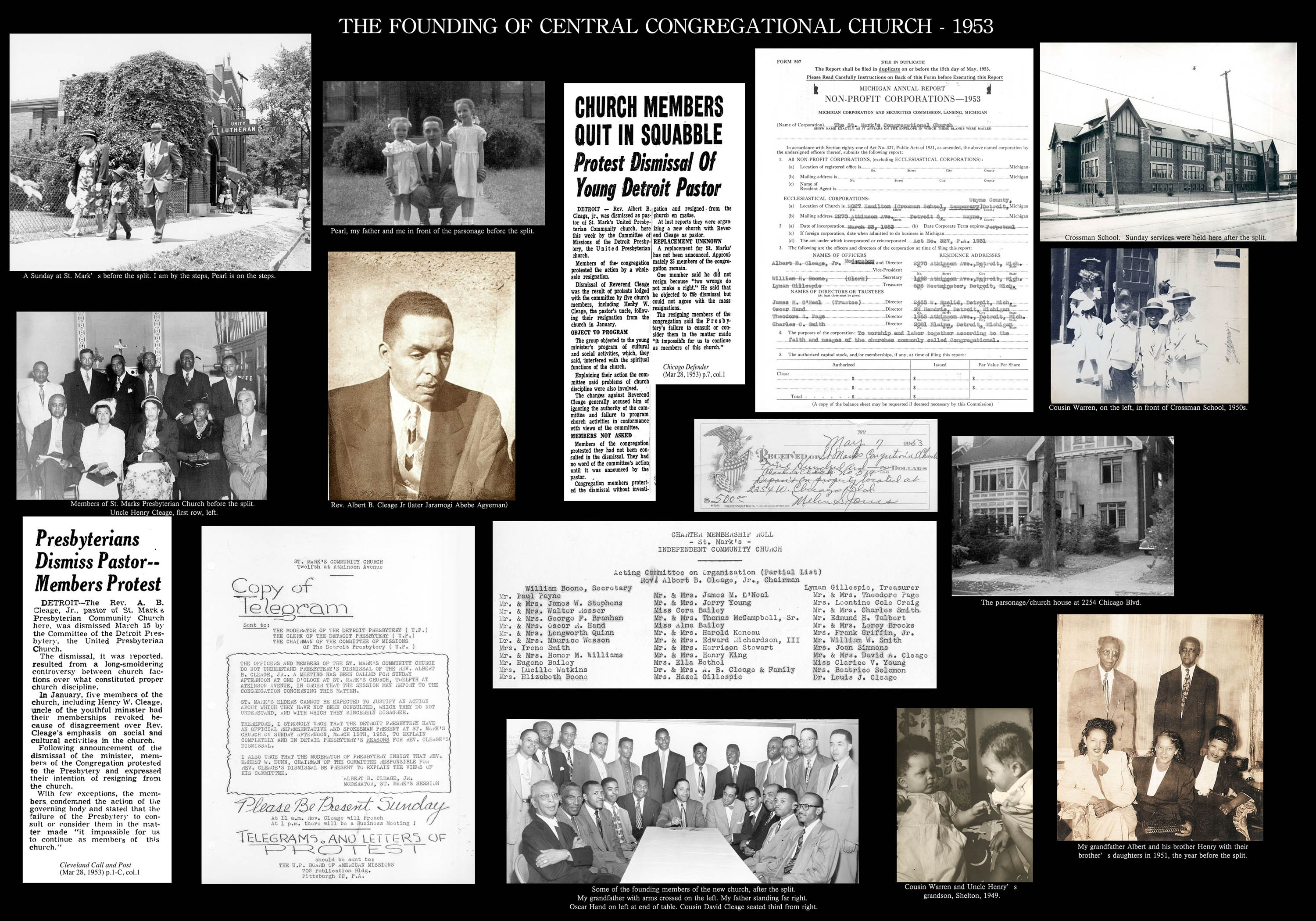 The split within the church also precipitated a family split. The ties between my grandfather, Dr. Albert B. Cleage Sr. and his brother Henry Cleage were  broken. The close relationship they shared throughout their lives, was gone. My sister didn’t know she had a cousin Shelton Hill (Uncle Henry’s grandson) until he introduced himself when they were classmates at Northwestern High School.

My grandfather Albert B. Cleage Sr. was the youngest of five siblings.  He and his brother Henry were always close. They helped organize Witherspoon United Presbyterian Church in Indianapolis and worked together to open the black YMCA there. During the 1930s and 1940s, they lived several blocks away on Detroit’s old West Side and saw each other almost daily.

After my father, Albert B. Cleage Jr. (later known as Jaramogi Abebe Agyeman) was ordained in 1943, he served as pastor of churches in Lexington, KY, San Francisco, CA and Springfield, MA.  During those years he often wrote home asking his family to help him find a church in Detroit.  More than once he mentioned getting his Uncle Henry to help.

In 1951 a group representing the United Presbyterian Church, including Albert Sr. and his brother Henry, organized St. Mark’s Presbyterian Church. It was located on 12th Street near Atkinson. My father was called to be the pastor. They started with 90 members and increased to over 300 during the following two years.

Uncle Henry and my father were both strong minded men. By the spring of 1953, they had reached an impasse over who was in charge and whether the focus of the church should be  on its own members or on the larger community. An emotional church meeting in March 1953 caused a split between both the church members and the brothers, Albert Sr. and Henry.

In 1956 my grandfather Albert was very sick with cancer when the family heard that Uncle Henry was quite ill and in the hospital.  Soon after they heard that Uncle Henry had died. They wondered if they should tell their father.  He was so sick and they didn’t know how it would affect him.  In the end, they didn’t have to. My grandfather was lying in bed and said “Henry died, didn’t he?” They said he had. Grandfather said, “I thought so.”  They never figured out how he knew.

My grandfather was too sick to go to the funeral. Afterwards, Uncle Henry’s family had the funeral procession drive by my grandparent’s house on Atkinson. The cars drove past very slowly.  It was a gesture toward the healing of a rift that began with the church fight in 1953.

12 thoughts on “A Church and Two Brothers – Two Splits”