For this year’s April A-Z Challenge, I am blogging a series of sketches about the free people formerly enslaved on the Cleage plantations in Athens, Tennessee. Most  are not related to me by blood, although our families came off of the same plantations – those of Samuel, Alexander and David Cleage.   Click on any image to enlarge.

Henry Cleage was born about 1824 in North Carolina. I wonder if he and my 2X great grandfather, Frank Cleage, were related because they both came from North Carolina. Henry first appears  in some instructions slave holder Samuel Cleage wrote to his overseer in 1834.

“… to keep the hands his Cleage’s negroes employed and make them work as would be right to correct them when they deserve but not to be cruel or abuse them but make them do their duty and not suffer them to run about from the farm at nights.   The hands or negroes are Bill, Henry, Joe, Frank, Lea, Fannie, two little boys and Peter}  Bill is not to be a hand until his master Cleage directs as he is stiller and is to remain in the still house while Cleage carrys on stilling.”

Jane and Adaline were mentioned in Alexander Cleage’s (son of Samuel Cleage) Will of 1860. 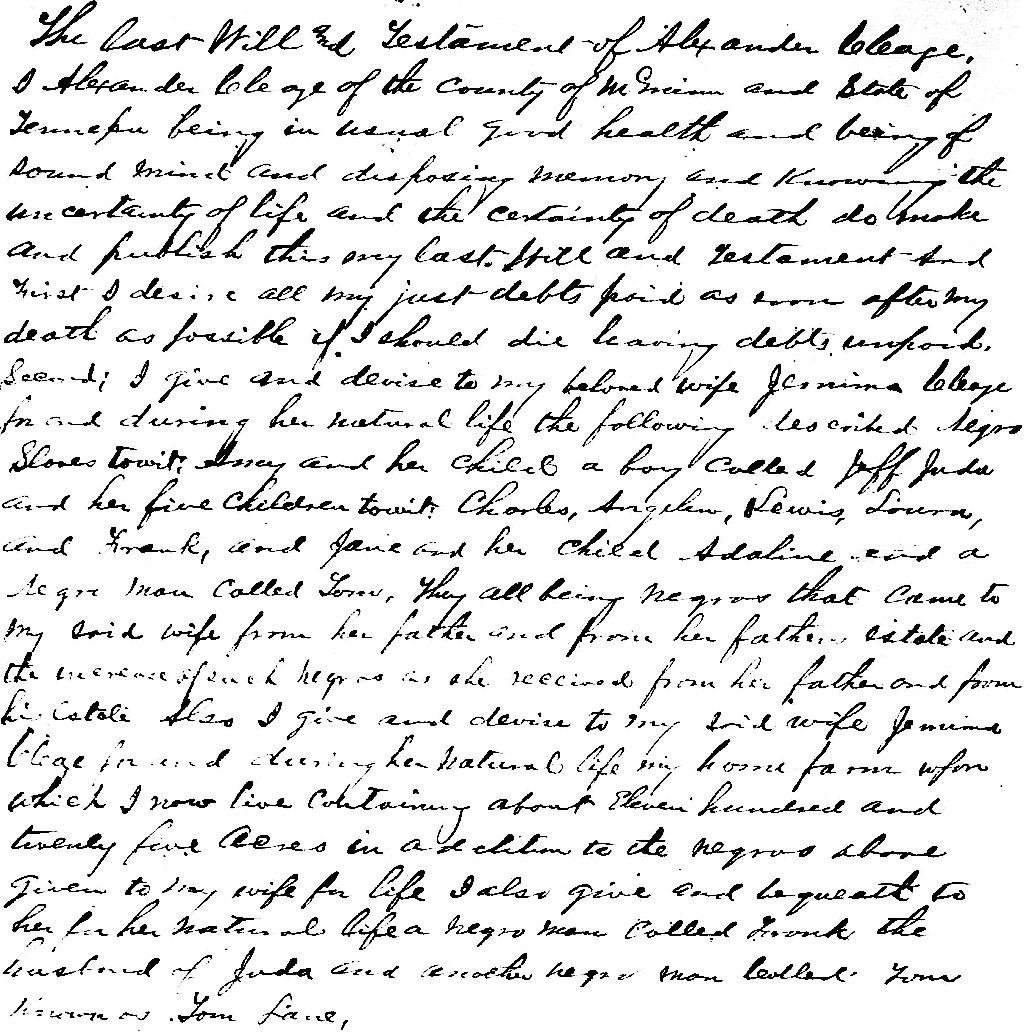 “The last Will and Testament of Alexander Cleage, I Alexander Cleage of the County of McMinn and State of Tennessee being in usual good health and being of sound mind and disposing memory and knowing the uncertanity of life and the certainty of death do make and publish this las Will and Testament and first I desire all my just debts paid as soon after my death as possible if I should die leaving debts unpaid.  Second; I give and devise to my beloved wife Jemima Cleage for and during her natural life the following negro slaves to wit Amy and her child a boy called Jeff, Juda and her five children to wit Charles, Angelin, Lewis, Laura, and Frank and Jane and her child Adaline and a negro man called Tom, they all being negros that came to my said wife from her father and from her father’s estate and the increase of said negros as she received from her father and from his estate. Also I give and devise to my wife Jemima Cleage for and during her natural life my home farm upon which I now live containing about eleven hundred and twenty five acres in addition to the negros above given to my wife for life I also give and bequeath to her for her natural life a negro man called Frank, the husband of Juda and another man called Tom, known as Tom Lane…”  30th day of May 1860 Alexander Cleage

Living next door were Adaline “Addie” and Edmund Sherman and their two young children, three year old William Henry and one year old Kate.  Ed was also a laborer. He had $100 worth of personal property and no real estate.  Looking at these two households, I assumed that Addie was Henry’s daughter and that William Henry was Edmund’s son.  However, looking at their death certificates, I found that Addie was Clint (known as Dick) Cleage’s daughter and William Henry was later listed as a Cleage, because his father was Nelson Cleage.  That is, if  the father’s names are right on the death certificate.

Looking through some of the other pages of the census, I found Sallie (widow of Clint) and her children on the page before them.  Several pages before that were George and Martha next door to Fannie Turk and her family.

In 1880 both families were enumerated twice, both times living next door to each other.  The first time they were still in District 7.  The second time they were enumerated in the Town of Athens.  Both men were laborers, all the adults were unable to read and write.  The two oldest children, William Henry (12) and Katie(10), attended school and were literate.  There were five younger children Bell (9), Sallie (8), Mat (5), Frank (4) and Dave (1).

Looking through the rest of the Town of Athens, I found Jerry and Charlotte Cleage’s daughter, America Cleage and her five children, on page 21.  On page 20 were Sallie Cleage and six of her children.  Also on that page were Sydney Cleage and her daughter Bell, and Roger Shurman and his first wife Jane and there 3 children and a border, Alice Cleage.  Roger Shurman was my great grandmother’s second husband.  On page 11 were Jerry and Charlotte Cleage and eight of their children.  On page 18 were George and Jane with their three daughters.  David Cleage who enslaved many of these families during slave times, is enumerated on page 4 with his family.

By 1900 Henry was dead.   Jane was 90 years old. She had birthed one child and that child was still alive.  Her grandson Frank and his wife Emma lived with her. Frank was a cook. Addie and her family were living next door. Addie had given birth to seven children and six were still living. Both families owned their houses free from mortgage.   Ed and William Henry were day laborers.  Addie’s daughter Sallie lived there and worked as a washer woman.

Ed and Addie’s daughter Isabelle lived next door.  She earned her living as a washer woman also. Her sister Sallie’s 6 year old daughter lived with her and attended school.  Sallie’s two year old son also lived there. The older people were illiterate while the next generation were all able  to read and write.

They were on page 16. On page 18 we find Fanny Cleage living with Charles Moss.  This was not the Fannie who was in the newspaper, but this one was also a cook.  On page 21 was Sallie Cleage Waterhouse and her family.  She was the daughter of Sallie and Clint Cleage.

Jane died before 1910.  Unfortunately She and Henry both died before Tennessee kept death records.  Addie lived to be 80 years old. She died March 18, 1923.  According to her death certificate she died of paralysis.  Her daughter Sallie Sherman was the informant.

I am going to use “I” tomorrow to Introduction.  My husband, who is my proof reader and does not dabble in genealogy or research, suggested I tell my readers how I come up with this information.  This works out well as I had no “I” Cleage. Tune in tomorrow for an “Introduction to My Investigations”.