This is the 26th post in the February Photo Collage Festival and the Family History Writing Challenge.  The photograph for today is a page in a booklet advertising Camp Talahi. There I am reading quietly beneath a tree.

Camp Talahi was associated with the Congregational Church (later the United Church of Christ). It was located on 180 acres beside Lake Chenago, about an hour from Detroit. 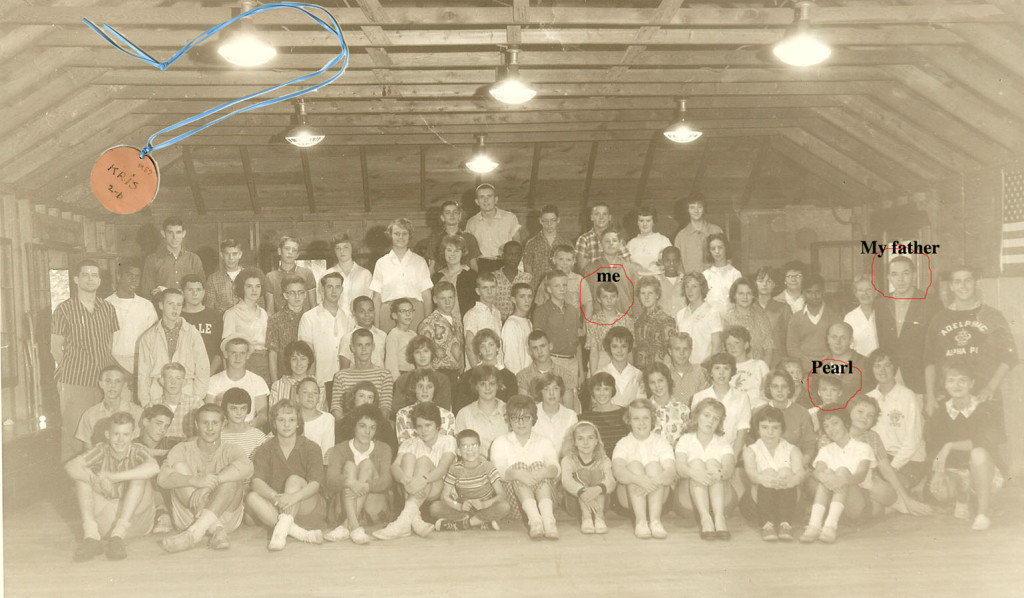 My father was a minister in the United Church of Christ at the time and sometimes he was there as a counselor at the same time that my sister and I were there.  In the camp photo above, my father, my sister and I were all there the same week.  I recognize some of the girls in the crowd as those who skipped activties and stayed in the cabin playing cards one year. I was a part of that group. At the top of the photo you can see one of the crafts we did. It’s a circle of leather with a piece of lanyard attached. I guess I wore it. The crafts were not  Camp Talahi’s strong point. Lots of braided Lanyard.

The craft workshop was on the lower level through those double doors. Upstairs was the screened porch where we took all meals. There was a large interior room with a stone fire place.  The daily Bible study workshops were held here too. There was a show later in the week with all cabins contributing a skit or some talent.

Camp sessions lasted a week. We arrived on Sunday afternoon and left on the following Saturday afternoon. There were 6 cabins for girls and others for the boys. Each cabin was divided in half. You entered through a door like the one Pearl is holding open, and you were either on side A or B. There were 4 0r 5 bunks on each side, plus a cot for the counselor.  I always tried to get an upper bunk by the window.  The windows were screened with shutters you controlled from inside with a rope. There was no glass.  The toilets and sinks were in the cement block building to the left in the above photo.  I don’t remember any showers. 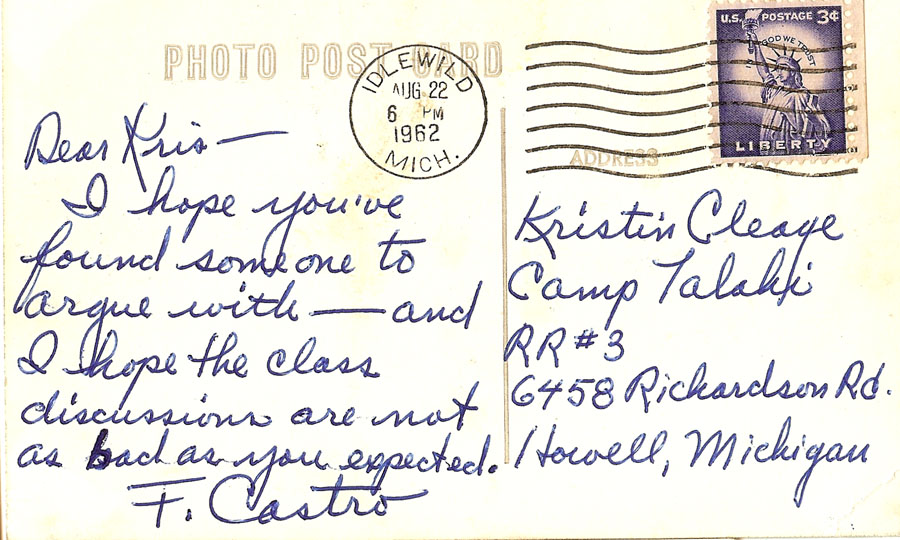 This is a postcard my father sent me in 1962.  He had a strange sense of humor. The classes were just as bad as I thought they would be.  They were usually about the Apostle Paul.  Every evening there was a vespers service on a hill. We sang some camp songs.  Somebody did a Bible reading.  We had a quiet meditation.

We never went camping or slept outside, although the boys did.  We had one cookout when our cabin went to the prepared campsite and cooked a hamburger, potatoes and carrots in foil on a fire.  We went on one walk in a piney woods once and I remember the wonderful smell.

We went swimming once or twice a day.  We had buddies and when the lifeguard blew the whistle, we had to hold hand up, together. We hung our towels and suits on a clothesline outside of the cabin. They hardly dried from use to use.

There were two black churches in the United Church of Christ in Michigan.  Both were in Detroit.  Ours was one and Plymouth was the other.  Usually there were a few kids from our church.  I don’t remember any from Plymouth.  Sometimes there would be a lone black kid from a small town who attended a mostly white church.

The directorship of the camp rotated between the ministers in the denomination who were actively involved. Except for my father.  He was never asked and was not included because he was black.  As far as I know, there was no unpleasantness between my father and other staff or campers.  He was quite popular with the  campers.  I never experienced any racism.  Mainly, girls would ask “Why is your hair like that?”  To which I answered, “Because that’s the way it grows”.  As years passed, I asked why their hair was so straight.  That just confused them.