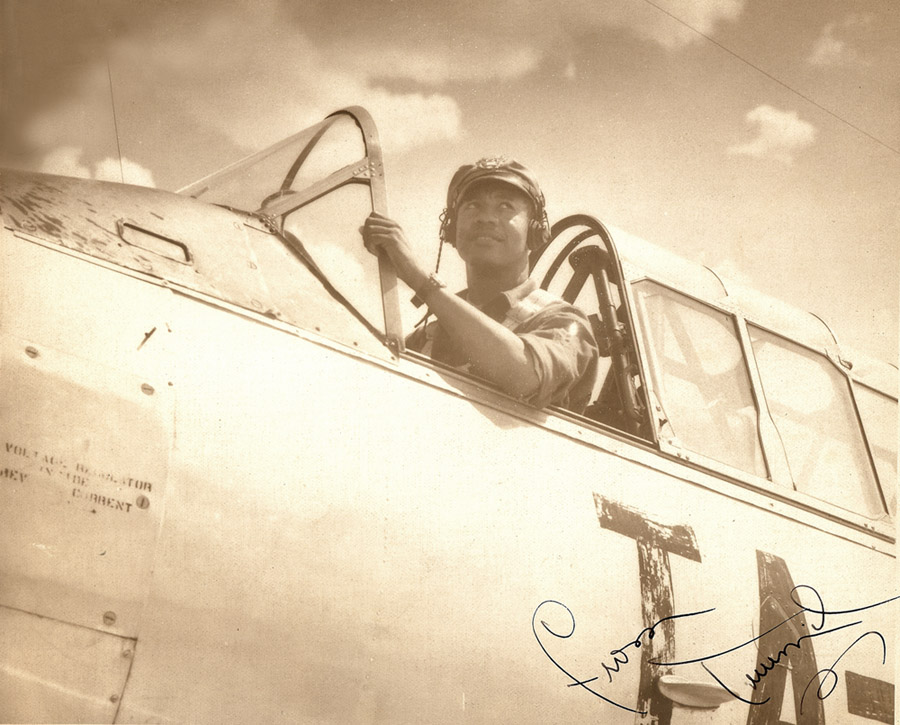 I found this photo in my collection. It was dedicated to one of my aunts from what looks like “Tummil”. I do not know who he is or where he’s going or what happened to him.

New information: received this today  “The plane is an AT-6 Texan.  The man in the plane is definitely an officer and possibly a pilot.  The photograph was taken in the states, possibly circa 1940-1950 as that was when the majority of training took place.  TA stands for Trainer Aircraft.  Neither of us recognize the pilot.”

And yet more information:  “Please let your sister know that we are not saying he was not a Tuskegee Airman.  By the fact that he is sitting in an A-6 trainer suggests he was in the Tuskegee program   But right now we have no way of knowing if he graduated or when he was in the program.  If I get a name then all sorts of avenues open up.  We just need to get lucky where someone recognizes him as having been in their class.  We have records of each graduating class.  The first graduating class was 42-C-SE on March 6, 1942.  The “SE” stands for Single Engine so the first class was all  Fighter Pilots.  There were five graduating officers:
Captain Benjamin O. Davis, Jr.
2nd Lt. Lemuel R. Custis
2nd Lt. Charles DeBow
2nd Lt. George S. Roberts
2nd Lt. Mac Ross

There were forty-four Single Engine classes and twenty-one TE (Twin Engine) classes.  The last class to graduate was 46-C-TE on June 28, 1946, 2nd Lt. Claude A. Rowe from Detroit Michigan.  The problem is that there were approximately one thousand pilots who graduated.  Only three hundred (+) went over to Europe.  Of that group at last count we know of forty four who are still living.  But… I know a guy.  He is ninety three and sharp as a tack.  He was attached to Headquarters.  I’m going to send him a copy and see what he says.  By the way, he had to jump out of planes twice during the war.  When I interviewed him he told me all kinds of great stories.  But the last one did make me smile.  I asked him if, at the end he took anything from his plane before he left to get on the boat to come home.  I swear there was a twinkle in his eye when he said, “…Well, you know some of the ladies who built the planes would write their names on the inside of the cockpit in lipstick.  They would also leave their phone numbers.  I made some calls!”‘