After writing about politics in my childhood yesterday, I remembered this interview I did with Henry in 1993 about the Freedom Now Party and decided to run it today.  Scroll down for an easier to read transcription of the article. There are several corrections.  Did I not fact check in those days?! 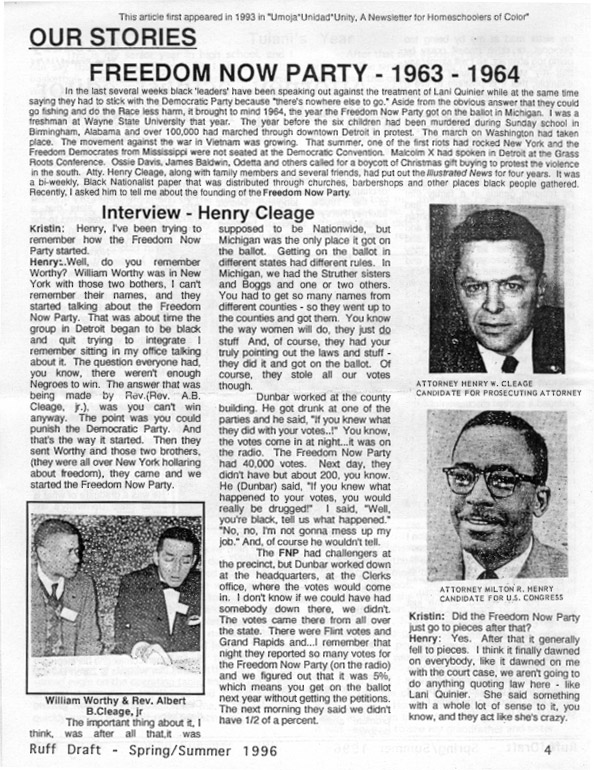 This article first appeared in 1993 in “Umoja * Unidad *Unity, A Newsletter for Homeschoolers of Color”

In the last several weeks black “leaders” have been speaking out against the treatment of Lani Guinier while at the same time saying they had to stick with the Democratic Party because “there’s nowhere else to go.” Aside from the obvious answer that they could go fishing and do the Race less harm, it brought to mind 1964, the year the Freedom Now Party got on the ballot in Michigan.  I was a freshman at Wayne State University that year.  The year before, the six children (Correction: 4 girls were killed, not 6) had been murdered during Sunday school in Birmingham, Alabama and over 100,000 had marched through downtown Detroit in protest. (Correction: the march took place before the bombing.) The March on Washington had taken place. The movement against the war in Vietnam was growing.  That summer, one of the first riots had rocked New York and the Freedom Democrats from Mississippi were not seated at the Democratic Convention.  Malcom X had spoken in Detroit at the Grass Roots Conference.  Ossie Davis, James Baldwin, Odetta and others called for a boycott of Christmas gift buying to protest the violence in the south.  Atty. Henry Cleage, along with family members and several friends had put out the Illustrated News for four years.  It was a biweekly Black Nationalist paper that was distributed through churches, baber shops and other places black people gathered.  Recently, I asked him to tell me about the founding of the Freedom Now Party.

Kristin: Henry, I’ve been trying to remember how the Freedom Now Party started.

Henry: Well, do you remember Worthy?  William Worthy was in New York with those two brothers, I can’t remember their names, and they started talking about the Freedom Now Party.  That was about the time the group in Detroit began to be black and quit trying to integrate.  I remember sitting in my office talking about it.  The question everyone had, you know, there weren’t enough Negroes to win.  The answer that was being made by Rev. (Note: Rev. A.B. Cleage Jr.) was you can’t win anyway.  The point was you could punish the Democratic Party.  And that’s the way it started. Then they sent Worthy and those two brothers, they were all over New York hollering about freedom, they came and we started the Freedom Now Party.

The important thing about it, I think, was after all that, it was supposed to be nationwide, but Michigan was the only place it got on the ballot.  Getting on the ballot in different states had different rules. In Michigan we had the Struther sisters and Boggs and one or two others.  You had to get so many names from different counties – so they went up to the counties and got them.  You know the way women will do, they just do stuff.  And, of course, they had yours truly pointing out the laws and stuff – they did it and they got on the ballot.  Of course they stole all our votes though.

Dunbar worked at the county building.  He got drunk at one of the parties and he said, “If you knew what they did with your votes…!”

He, Dunbar, said, “If you knew what happened to your votes, you would really be drugged!”

I said, “Well, you’re black, tell us what happened.”

The FNP had challengers at the precinct, but Dunbar worked down at headquarters, at the Clerks office, where the votes would come in.  I don’t know if we could have had somebody down there we didn’t.  The votes came there from all over the state.  There were Flint votes and Grand Rapids and…I remember that night they reported so many votes for the Freedom Now Party, on the radio, and we figured out that it was 5%, which means you get on the ballot next year without getting the petitions.  The next morning they said we didn’t have 1/2 of a percent.

Kristin:  Did the Freedom Now Party just go to pieces after that?

Henry: Yes.  After that it generally fell to pieces.  I think it finally dawned on everybody, like it dawned on me with the court case, we aren’t going to do anything quoting law here. Like Lani Guiner.  She said something with a whole lot of sense to it, you know, and they act like she’s crazy.

To read more about Lani Guinier and the 1993 controversy read “‘Quota Queen’ or Misquoted Queen?”.