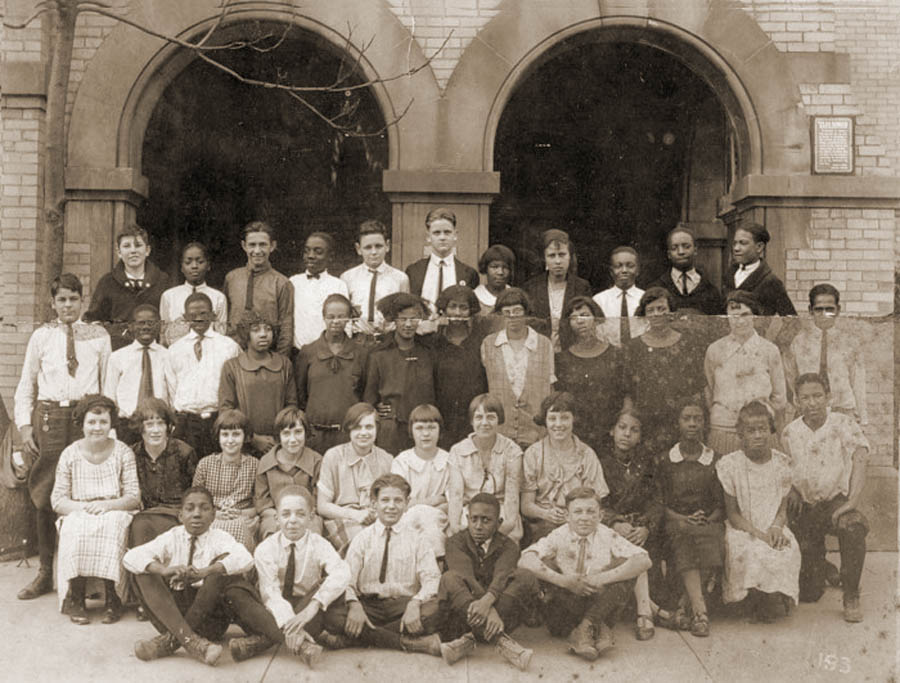 My father, Albert B. Cleage, Jr (front row, second from left), with his 8th grade class at Wingert Elementary School in Detroit, Michigan. He was 12 years old.  It was 1923.  In Detroit, it depended on what community you lived in whether the school you attended was integrated or not. My uncles said that the abundance of white children in this class was due to the white orphanage across West Grand Blvd from Wingert.

When my father and his siblings graduated to Northwestern High School, there was a much smaller percentage of black students and, depending on the teacher, more or less discrimination. There are many tales of my grandmother going up to the school to demand that her children not be seated in the back of the classroom and other outward signs. I wish I had interviewed her.

I am going to quote now from a biography of my father, Prophet of the Black Nation, written in 1969 by Hiley Ward, . The following is taken from pages 74 – 78.

Cleage, who attended Detroit public schools draws some of his militantism on schools from his own experiences with discrimination back in the 20’s, particularly his high school, Northwestern, which was nearly all white at that time but is nearly solid black now.  He remembers, “I didn’t like anything about it.  There were all kinds of discrimination.” the school clubs were closed to blacks, he says, “It was a horrible atmosphere, and I took part in as little as possible.”  He recalls that the teachers would always put the black youths at the back of the classroom.  “It was dismal. My parents would go up and raise enough donnybrook and hell to take care of the situation (classroom seating, etc.)”; but,he says, they were powerless to penetrate the fabric of discrimination by the white teachers and administration.  “It wasn’t the students, so much as the administration.”  Cleage took a try at the 440 in track, which by his own admission was “nothing great,” and he says several black students were able with much effort to break into the predominately white school’s team sports.  His brother Henry, now an attorney for the Neighborhood Legal Services, was “first cellist in the school orchestra; but every time they had a concert they tried to place him so it would appear that he was not the first cellist.  This was trivial, but…”

Cleage’s sister Gladys remembers how her father helped form the Wingert school PTA and was instrumental in getting the first black teacher by means of a petition.”He would argue with the school board and everybody else.”

Cleage’s mother said of the schools her boys attended (Wingert Elementary and Northwestern), I had to fight for them all the way through,  for I knew a mistreated child could have a blight for years…if a child said he was having trouble naturally, I’d go up to see about it.”

Albert “is a great talker now,” she said, “but in high school he was not much of a talker unless he had something specific to say,”  She remembers going in to see on English teacher who told her, “Albert doesn’t smile or talk much.” “And I said, ‘Is there anything to smile or talk about?’ She had sent him down to the principal to see if the principal could make him talk, and the principal said, ‘Well, Albert, you are not much of a talker,’ and sent him back.  The English teacher talked about grades. I said, ‘He came to you with an A.  Send down to the office and see the record for yourself, and you keep him to a C – ridiculous!  I say he’s an A student!  If he doesn’t work, you can still hold him to a C. But I thought you graded on work.’ She was foolish.  Another teacher said his papers were too lengthy.  But God does not make us all alike.  God made some minds to be emphatic… Louis – now the M.D. – could write short papers.  Louis just put it down, but you can’t grade this son by his younger brother’s method.”

Mrs. Cleage, the 81-year-old matriarch, watched me closely as I wrote down her words. “I feel sorry for parents raising colored children.” she said, “for so many don’t have the fight like I do.” Perhaps I grinned a little at this point, in admiration of the energy of  this tremendous lady still full of the old vinegar for her sons.  “You smile, but you don’t know,” she said “You have to do something in a country like the United States.”

She did the same with all her youngsters.  “Louis was brokenhearted when he got a C in chemistry.  So I went to his counselor. ‘You come with me,’ I told him. ‘I’m taking him out of that class.  I can’t have a child ruined by a man who hates colored people.’ I took him to another class, and the new teacher was amazed – he was an A student all along.”  Daughter Barbara recalled that “there was a teacher who opened the door by the top where no ‘colored’ child touches the door.” She recalls her mother telling the principal, “I can’t stand this.  This girl and other children are too fine.  Take that polluted woman out.”

You can see a photo of Wigert school at this link.  Below is a photo I took about 2005 of the main doorway, where I think the photo was taken.