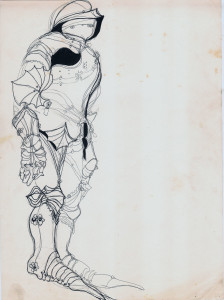 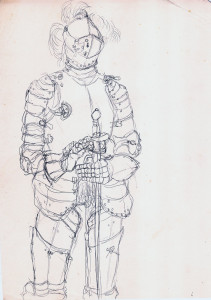 In 1968 when I was an art student drawing all the time, I often went to the Detroit Institute of Art to sketch in the Entrance Hall where two long rows of knight’s armor stood against the walls. They are now enclosed in glass cases, but at the time they were just out there, standing along the walls.

In 1997, my youngest son Cabral and I took a train trip to Albuquerque, New Mexico from our home in Idlewild, MI. We went to visit another  homeschooling family. I had met the mother, Sandra Dodd, online in the AOL Homeschooling forum. 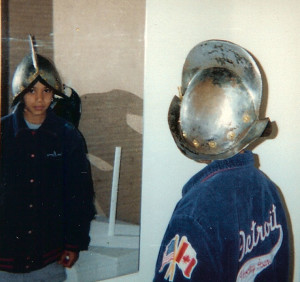 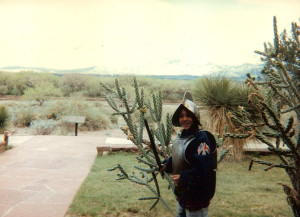 homeschoolers in our area of Lake County, Idlewild were few and far between. I thought it would be interesting to actually meet in real life one of the people I spent so much time (and money in those days) visiting with online.  When unschooler Sandra invited us out, we went.  We were there almost a week and saw a inactive volcano, played miniature golf, watched videos and went to a science museum. What stands out in my mind the most is the day we visited a museum that had actual items from New Mexico’s early days, including Spanish armor, and they let people try it on. Above you see my son trying out the various items. He even got to go outside for a photograph and in the New Mexico landscape. 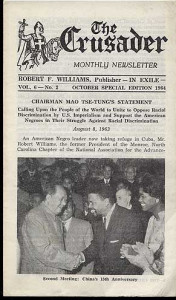 This weeks prompt for Sepia Saturday is Boudica, a freedom fighter for the local British tribes against the Roman invaders, this makes my choice of Robert Williams all the more relevant. Robert Williams died in 1996. He was author of the book “Negro’s With Guns” and an advocate of self defense for black people.  He was from North Carolina. He published his newsletter The Crusader for years. The logo was a little figure of a crusading knight.

I remember a letter from my mother describing Robert Williams picketing the local newspaper, The Lake County Star, with a photograph of him wearing his WW I German helmet. Unfortunately, I can’t find it. I did find a description of the picket by Father Joe Fix given at Robert Williams funeral. Father Joe was the Priest at St. Ann’s Catholic Church in Baldwin, MI where Robert’s wife, Mabel, was a member. Below are his remarks. You can see the full transcript of the funeral by clicking the title.

I first met Robert almost nine years ago. I was invited to a party for the priest who had preceded me at St. Ann’s. Father Ray was saying good-bye to his people. I’ll never forget he singled out Robert and he looked at Robert and he said, “Robert, thank you for being the conscience of Lake County.” I never forgot that. It was only last week that Father Ray came by, and he was going to help a celebration and he said, “Robert is the first prophet that I have ever met.” The first prophet. I wanted to add, in my book, he was the first martyr that I ever met, because Robert had a sincere table appetite for news and he would watch 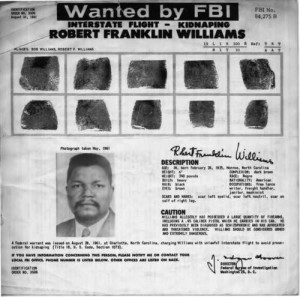 all of Rush Limbaugh. Anybody who listens more than two seconds to Rush is definitely a martyr. I remember walking Downtown Baldwin. It’s not very big, and I seen this character on the main street. And he had this funny helmet on, with this red light bulb on top. It was flashing, and he had four-sided sandwich board, not two sided. And I walked up and it was Robert. He was protesting the local rag because it refused to print his letter to the editor. Guess what? The letter was printed the next week. I remember going to one of my first meetings involved with a new superintendent, and Robert was there, voicing his displeasure with the counselors of the high school because they were not reaching the needs of our youth in that county. I remember going to courthouse and sometimes supporting people I knew that were on trial, and Robert was there. He was there much more often than I was, and much more vocal… standing up for victims of an unjust system To me, Robert truly was Prophet. When I was a child, I always thought of Prophet as someone who foretold the future. Robert did that. But the main job of a prophet, as I’m growing up, is to speak out against injustice; whether it was Isiah or Jeremiah called by God to speak to the Jewish people. And he mentioned they were killed, but that was their job. Whether it was Ghandi who answered the call in India, or Nelson Mandela in South Africa. But it was Robert Williams who answered the call in Monroe, NC. He answered the call to speak out against the unjust system and people that would not let children swim in a pool because they happened to be a different color. He spoke out against the injustice that would allow a man to protect his wife, his children, his property. And even though he was exiled, he spoke, from Cuba, and as far away as China, against the injustice of the system that would not allow someone to be free. I believe that God gave us the gift of Robert Williams to challenge us to be Prophet, and if not to be Prophet, to

support prophets. I really believe that. I believe that we need to answer the call to continue to speak out against racism and sexism… and maybe when we do, people of different cultures and races can get together and share food and laugh together, cry together, but especially learn to dream together. We need to speak out against the injustice of violence and war. An exorbitant amount of our tax money is spent to create the largest military operation in the whole world. And maybe when we speak out against the injustice, there will be money to teach our children to take care of our elderly and to protect our land. We need to speak out against the injustice of greed. There’s a greater chasm now between the rich and the poor.. we’re losing our middle class. And maybe when we continue to reach out and speak against the injustice, all of God’s children will be able to enjoy the gifts from God. We come here today to say thank you for the gift of Robert who answered the call to be Prophet. I will never forget (and I really believe that Mabel is Prophetess, right along with Robert), I will never forget on the day that Robert died. Mabel and I were praying over him, and afterwards, she said these marvelous words, “He really did make a difference.”

To read more about Robert Williams In Memory of Robert F. Williams