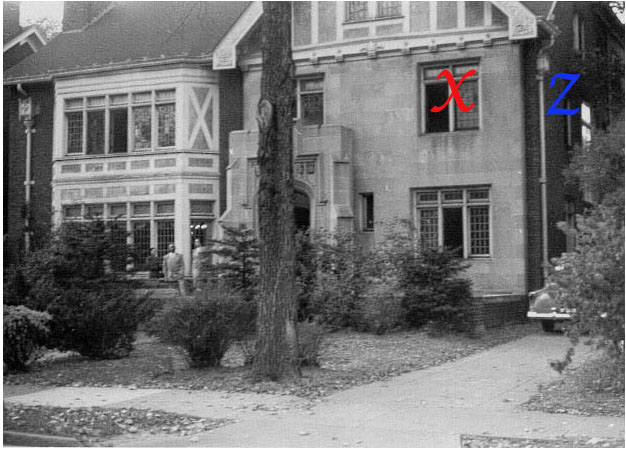 When I was growing up in the 1950’s lights were rare in my neighborhood.  I remember the first lights I saw.  My family moved into the huge house above in 1952 after a church fight in which my father, a pastor, and 300 parishioners left St. Marks Presbyterian church to organize Central Congregational Church.  During the time before a new church building was found and purchased the church met at Crossman School on Sundays while all other activities were held at the house above.  We lived on the second floor, church activities were on the first floor and in the very large recreatuion room in the basement.  My sister and I shared the bedroom marked with the red X.  On the side was a window (marked Z) that we could look out of at night and see a house in the next block outlined in multicolored lights.  We called it the gingerbread house and thought it was beautiful and unique.  I don’t remember ever riding by when the lights were on.  We lived on the westside of Detroit while one set of grandparents lived on the eastside.  Driving from one house to the other we would be coming home after dark and I remember looking at people’s lit Christmas trees through the windows, I don’t remember any outdoor lights.  In later years that changed.  I think my west side grandparents eventually had lights and some carolers out in front.  My youngest son always wanted to put lights outside our house but since we lived at the end of a dead end road in the middle of the Manistee National Forest at the time, it never happened.

14 thoughts on “We never had outdoor lights”