This is the 20th post in the February Photo Collage Festival and the Family History Writing Challenge.   This week I cover places where I have lived that weren’t covered in the Alphabet Challenge last year. Today I remember 2600 Cascade Road SW in Atlanta.

We moved to Atlanta in September of 1972. I was about 2 months pregnant. That would be a recurring description of me off and on over the next 10 years. Jim had been talking about moving south and my sister lived in Atlanta so that is where we went. Pearl found us a duplex on Cascade Road not too far from her house on Willis Mill Road. 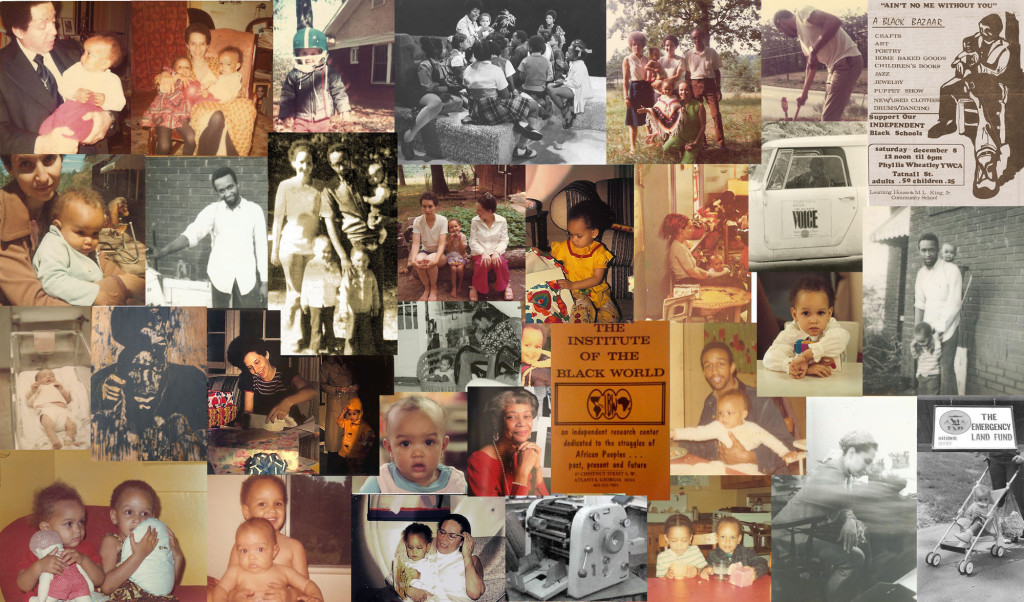 Jim alternated between Detroit and Atlanta until just before Ife was born at the end of March, 1973. My sister helped me get a job at the Institute of the Black World (IBW). Part of the statement of purpose of IBW read: “The Institute of the Black World is a gathering of black intellectuals who are convinced that the gifts of their minds are meant to be fully used in the service of the black community. It is therefore an experiment with scholarship in the context of struggle.”

I, however, was hired to do clerical work and was not a member of the intellectual staff. I typed, organized a small library, ran off the IBW newsletter on their  off-set printing press, helped with mailings and sometimes transcribed tapes. As I remember, the in-house staff was small, less than ten people.  When the Watergate Hearings started, we worked around the conference table as often as possible to enable us to watch the hearings on TV.  Sometimes educational meetings were called when interesting people came to town. They talked to us about the struggle where they were.

While I worked, my daughter Jilo attended the Martin Luther King Jr. Preschool. It was several blocks from IBW and had an afro-centric curriculum. Ruth, a fellow employee at IBW, drove by our house on her way to work. She stopped and picked us up each morning.  From work I walked Jilo to school.  After several days of crying when I dropped her off, my two year old daughter settled in and seemed to enjoy the program.

I remember the surprise baby shower the IBW staff gave me at some friends house.  I thought I was going to dinner until everybody yelled “Surprise!” Three days before the birth, it felt like it was time to stop working. I mostly slept  those three days and then delivered my second daughter, Ife at Holy Family Hospital, with Dr. Borders in attendance. It was a natural birth and Jim was there.  All went well. Ife was a big baby and fussier than Jilo had been. She went to sleep best when Stevie Wonder was singing “You Are the Sunshine of My Life”.

Jim got a job printing at the Atlanta Voice Newspaper. I stopped working outside the homes. We got our first full sized washing machine! I sold a poster I made using a woodcut to a group recruiting black students for historically black colleges and designed  a sign for the Emergency Land Fund and I got paid.

The Atlanta Voice was a weekly newspaper so Jim was often working at night putting out the paper. Ife had decided that the middle of the night was the time to get some one on one time with me. That spring there seemed to be a constant stream of  severe thunderstorms moving through the area in the middle of the night. Always while Jim was at work.

I sewed most of the children’s clothes. Those I didn’t sew, I bought second hand. I started my first garden. The yard was a bit shady, but I did get some tomatoes and green beans. We got a dog who ran out into the street and got hit by a car. The across the street neighbor’s dog had puppies under the other side of the duplex neighbor’s car.  Jilo played outside all the time. It was the first place we lived that had a yard. There were plenty of kids near us and they often played at our house.  I formed a baby co-op with two friends and we got a little bit of free time without kids. I can remember walking down the street after dropping off Jilo and Ife but I can’t remember where I went or what I did.

We didn’t have a car. Jim drove the Atlanta Voice truck to and from work. I took the bus or walked or my sister sometimes gave me a ride. I remember walking up to the Salvation Army on the corner of Cascade and Donnelly; walking to Adams Park to take the children swimming; walking to my sister’s house on Willis Mill.  Jilo would be walking and I’d push Ife in the Umbroller. The only bad part of walking was that there were no sidewalks in the neighborhood, so all walking was done on the side of the street.  There was much less traffic back then and I didn’t feel like I was taking my life in my hands.  There was a pasture across the street from my house in 1973, now there are condos.

My father decided to open a branch of his church in Atlanta so we saw him as he came down to prepare the way. Other family and friends passed through Atlanta on a regular basis.  Looking back it’s hard to remember why we felt the need to move on but we wanted to get out of the city. In 1974 Jim got a job with the Emergency Land Fund and we moved to Mt. Pleasant, South Carolina.

When Jim received his FBI file several years ago, we found the memos below included. 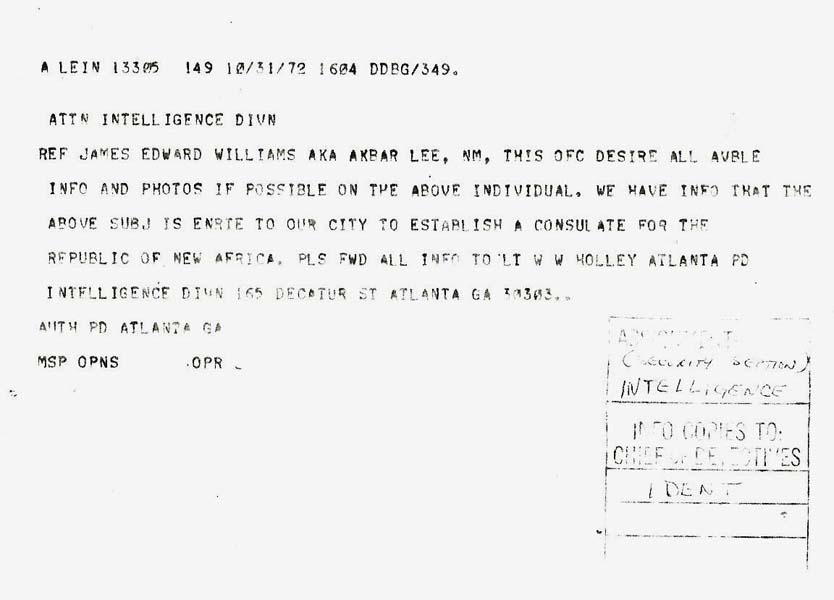 REF JAMES EDWARD WILLIAMS AKA AKBAR LEE, NM (note: stands for Negro Male), THIS OFC DESIRE ALL AVBLE INFO AND PHOTOS IF POSSIBLE ON THE ABOVE INDIVIDUAL, WE HAVE INFO THAT THE ABOVE SUBJ IS ENRTE TO OUR CITY TO ESTABLISH A CONSULATE FOR THE REPUBLIC OF NEW AFRICA. PLS FWD ALL INFO TO LT WW HOLLEY ATLANTA PD(Note: stands for Police Department) INTELLIGENCE DIVN 165 DECATUR ST ATLANTA GA 30303. 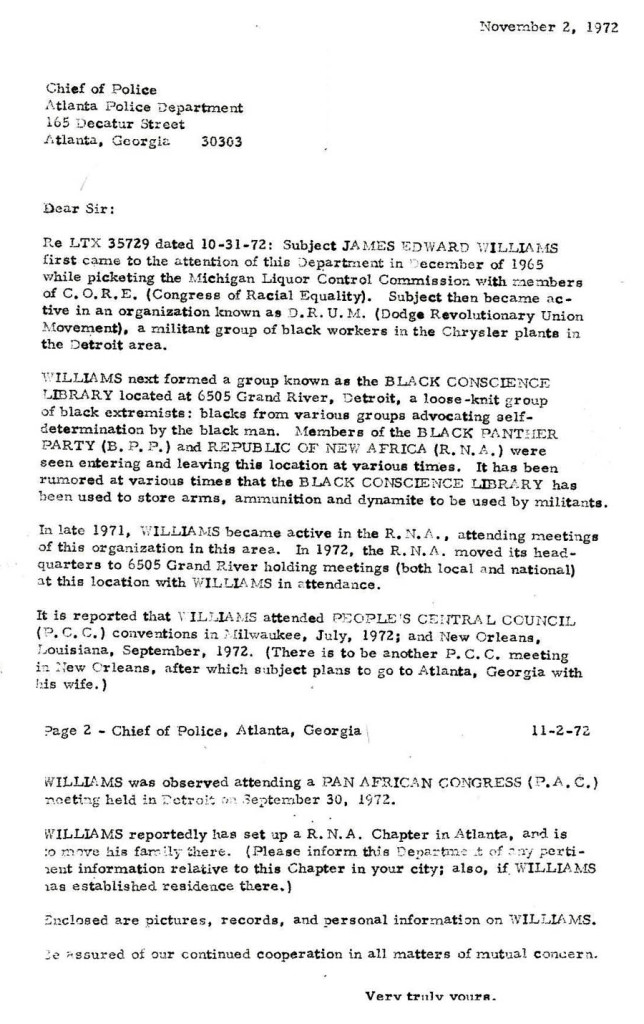