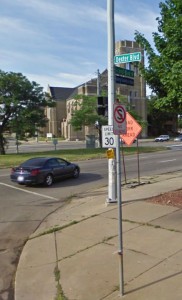 I moved a lot when I lived in Detroit. Most of the time I was in the same area.  Dexter is one of the streets I never lived on but that runs through my years.

My earliest memory from Dexter happened in a Chinese Restaurant. I was about 8 years old and was there with my parents and sister, Pearl.  The booth was enclosed,  a curtain across the door made it like a little room, filled by the table and chairs. My father and sister ordered the turkey dinner. My mother and I ordered Chinese food. Pearl and I were laughing about something silly. My mother told us not to laugh because the waiter might think we were laughing at him.

My mother took us to see the never ending “Ten Commandments” at the Dexter Theater, at the corner of Dexter and Burlingame. My father took us to see “West Side Story” when it came out in 1961. When Tony got shot to death and Maria started to sing “Somewhere”, the audience burst into laughter.

After the 1967 Detroit riot,  Rap Brown spoke to an overflowing and enthusiastic crowd. My father and sister milled around outside for awhile. Jim (now my husband) was working with the Inner City Voice newspaper, one of the groups sponsoring the event along with the Friends of SNCC (the Student Nonviolent Coordinating Committee).  I wondered for years why I wasn’t there until I put together the date with some letters I wrote home and realized I was at a student conference in Santa Barbara, California.  The whole block where the theater stood is now a vacant lot.

When we lived on Oregon Street, Pearl and I would catch the Dexter bus on Saturday to the Main Library, the Detroit Historical Museum or the Detroit Institute of Art. Bus fare was 25 cents. Admission to the museums was free. We ate hamburgers at a drug store on the corner of Warren and Cass. It had a lunch counter. Once we rode our bikes and parked them outside of the library, without using locks. They were stolen so we walked home. 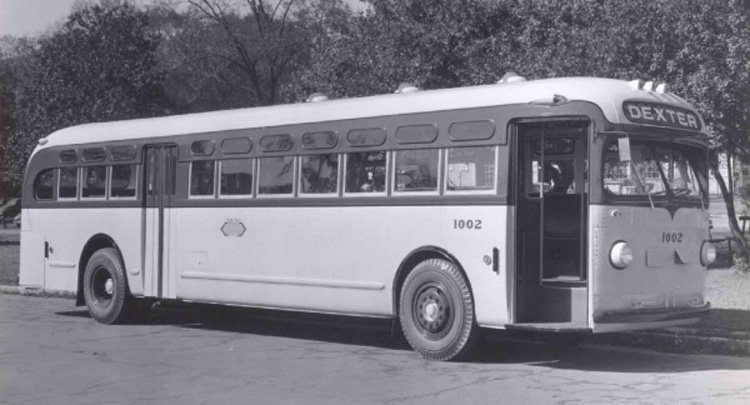 During my college years I took the Dexter bus to and from school.  When we lived on Oregon, I walked 8 blocks to Dexter and West Grand Blvd to catch it. It took me right down Cass Ave. to the campus. When we moved on Fairfield, out by the University of Detroit,  the Dexter bus stopped right across from the flat.  I could stay on campus later and catch the bus right to my door after dark. I wished we had lived there for the other three years I was in college.

Ed Vaughn opened Vaughn’s Bookstore at 12123 Dexter about 1964. I remember winning a gift certificate to the bookstore during the summer of 1964.  It was the first black bookstore in Detroit. He carried some art objects along with a wide variety of fiction and history from African, the USA and the Caribbean Islands.  There were novels from the Harlem Renaissance and from West Africa.  I still have some of the books and small sculptures I bought there. You couldn’t find these books in other Detroit bookstores in the 1960s. 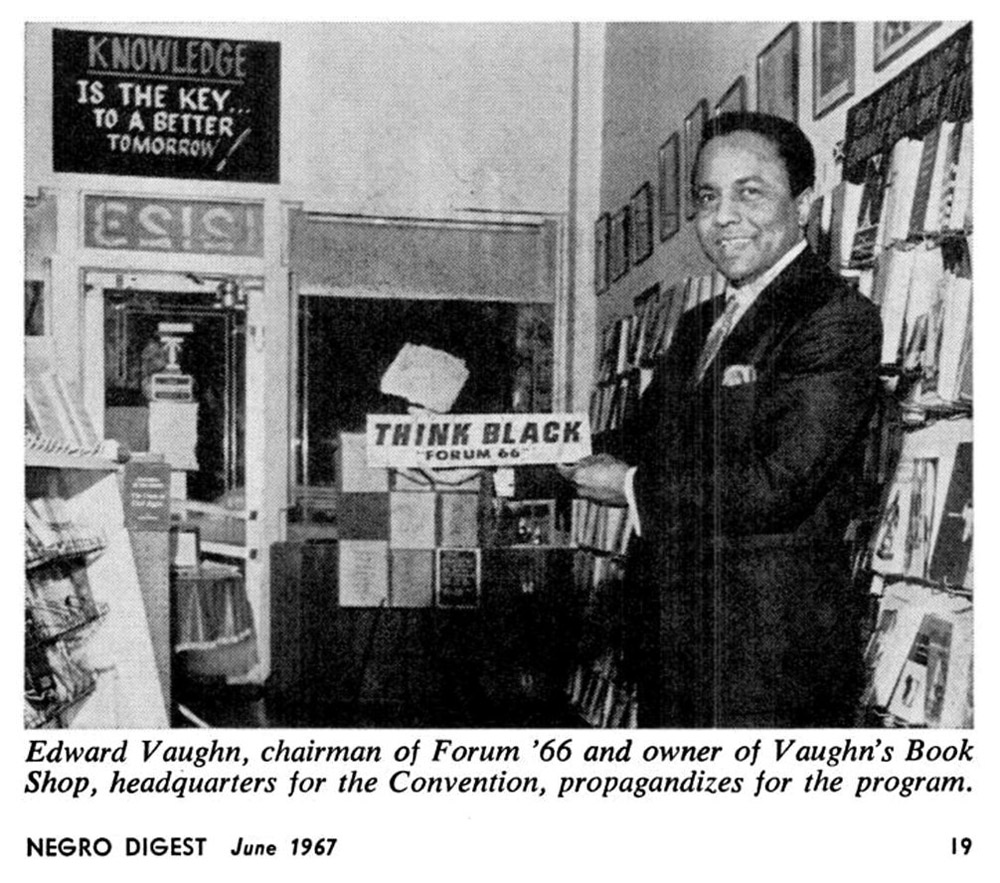 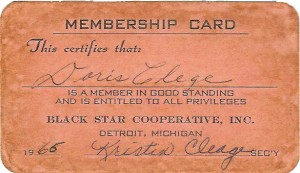 Vaughn also sponsored Forum -65, ’66 and ’67 which brought various speakers into the bookstore to talk about topics such as black nationalism, culture, Africa and the condition of black people in America and around the world.  Many lively discussions took place. I didn’t attend too many of the forums, but I regularly attended the Black Star Cooperative meetings, which were also held there. In fact, I was the secretary.  My uncle Henry and I attended the weekly meetings where the group talked about cooperative housing and other ways to pool our money. I remember Henry talking about starting a credit union.

During the 1967 Detroit riot, Vaughn’s bookstore was damaged by the police. To read an interview with Ed Vaughn about his bookstore and the Detroit riot click HERE. A more recent article about Vaughn and some memories of the bookstore back in the day, go to Ed Vaughn, Alabama NAACP president injured.

I remember being very pregnant the summer of 1970 and walking to the grocery store on Dexter wearing platform sandles. The Black Conscience library was temporarily housed in the basement of friends house on Glendale and I was temporarily living in a nice size cedar closet with a window and view of the tree tops, in the attic. I remember going to Mattie’s Bar-B-Q at 11728 Dexter, near Glendale, during the same time.  I usually ordered chicken with sides of greens and sweet potatoes, or macaroni and cheese. Jim always ordered short ribs with his two sides. It was small, crowded and friendly. It wasn’t very expensive, stayed open late and the food was as good or better then what was served at The Red Satin, a more high tone soul food restaurant with table cloths. My father took me there several times. I remember going one year to celebrate Mother’s Day with him and my grandmother, sister and several uncles.  Mattie’s building is gone. You can see the building that housed the Red Satin as it looked in 2009 below.

About the time I moved to my own apartment, my aunt Mary V Graham Elkins, got a job at the Hospital across the street from the flat on Fairfield that my mother, Henry and my Graham grandparents shared. She moved into a flat around the corner from them and the hospital, at 16203 Dexter.  My cousin Barbara and her two sons eventually moved into the flat next door to her. 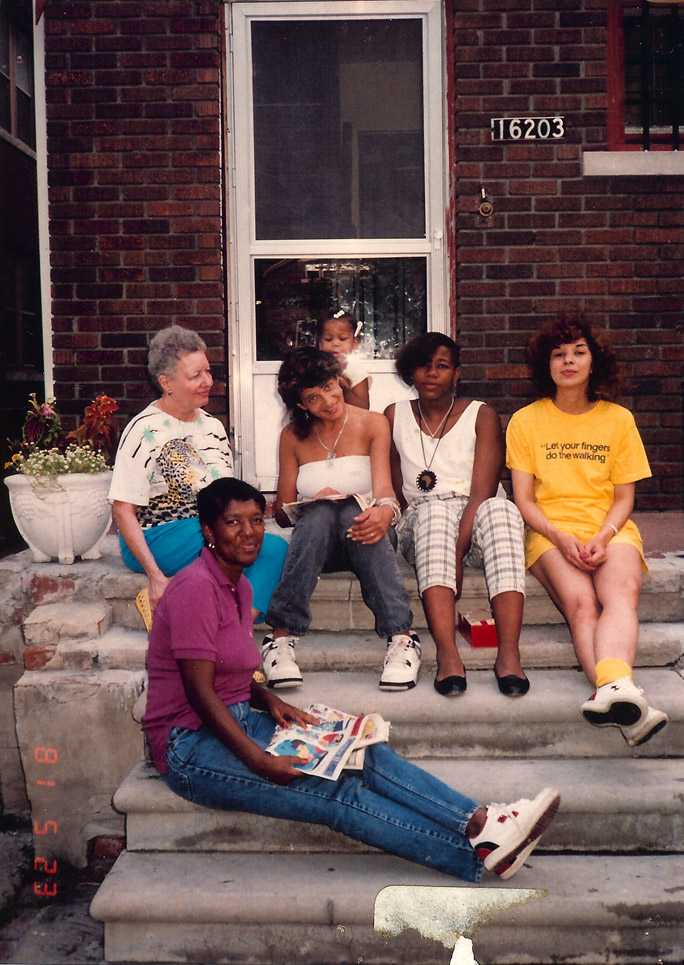 Neither of the Dexter flats are standing now. The Fairfield flat is. 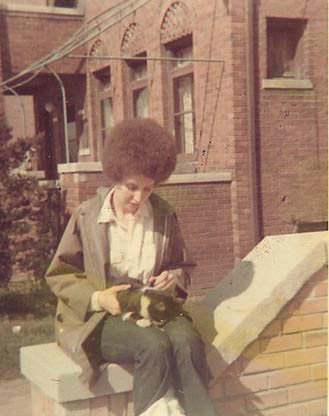 Sitting on my cousin Barbara’s porch holding a cat in 1970. The house in the background is still standing, you can see it below. In the other photograph Mary V., Barbara and Marilyn sit on her porch with friends in 1981.