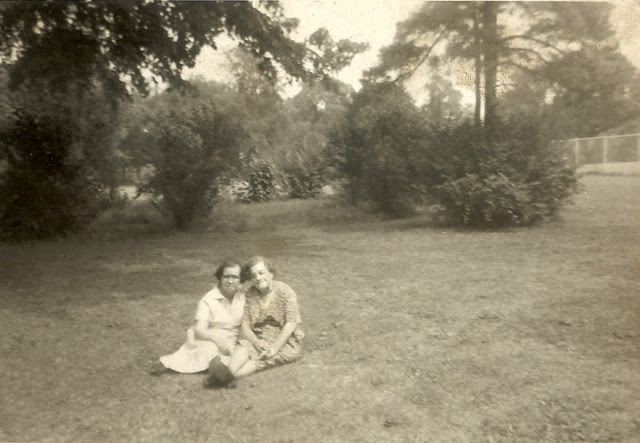 I restrained myself from adding facts or “correcting memories”.  I appreciate my relatives for sharing their memories with me!  You can read other posts about Alice here – Just The Facts – A Time Line for Alice,  Finding Alice  and  More About Alice.  I wonder what people will remember about me when I’m gone.

Doris Graham Cleage
Alice only worked a little while.  She had problems getting along with people.  Grandmother Turner was eventually senile.  Died of a stroke at 83 or so.

Whenever Daisy really considered leaving, Grandmother did the old guilt trick “How can you leave me to take car of Alice all by myself?”  Alice spent years taking care of her while Daisy worked. She and Alice would buy us dainty, expensive little dresses from Siegel’s or Himelhoch’s.  They all went to church every Sunday.  Plymouth. While they lived with us I remember violent arguments between Alice and I don’t know who – either Grandmother or Daisy or Mother. Certainly not Daddy because when he spoke it was like who (?) in the Bible who said, “When I say go, they goeth. When I say come, they cometh.”

Maybe here a word about Aunt Daisy.  Look at her picture, sweet, soft, pretty, taught school awhile in Montgomery (with high school diploma)  loved Congregational preacher named Duncan Erby who loved her and waited for her for years.  Had a church in Buffalo, NY.  Whenever she really considered leaving, Grandmother did the old guilt trick “How can you leave me to take car of Alice all by myself?”  and “No man in this world is good enough to touch your little finger.  They are all no good except (maybe) Shell.” and Daisy listened and stayed and played numbers, studied dream books and drank a little apricot brandy.  I always found their house light, cheerful, full of magazines (McCall’s, Journal, etc.) which I loved to read, full of good things to eat.  All three were super cooks and they had always just had a bunch of friends to dinner and to play cards or just about to have.

Kris (Me)
By 1961 both Alice’s mother and sister Daisy were dead.  Alice moved in with my grandparents, Fannie and Mershell. Soon after Alice was diagnosed with schizophrenia.  We sometimes heard her talking to people who weren’t there. She spent several years in the Ypsilanti mental hospital before moving back with my grandparents.  Alice and Aunt Abbie shared a room. Alice wasn’t always clean and still seemed distracted.  I don’t have many memories of Alice.  She was small. She was quiet and she was there.  I don’t remember ever having a conversation with her.  Once I was visiting my mother with my daughter Jilo before we left Detroit and I learned it was Alice’s birthday and nothing special was planned.  I  suggested we go get her a cake and have a little party for her, which we did. It seemed very sad that her birthday was going to pass without anything.

After my grandparents died in 1973 and 1974 Alice was moved into a senior home.  I was no longer living in Detroit. My mother told me Alice wanted to move back home, that she imagined she was 35 and pregnant. Alice never married and never had any children. I never even heard of a boyfriend.

In 1975, on a trip to Detroit I visited her with my two daughters who were 2 and 4 years old. She was happy to see us and enjoyed seeing my daughters. My mother moved to Idlewild soon after and it was the last time I saw Alice, although she lived another 18 years.  She was cremated and her ashes were buried in her mother’s grave in Detroit Memorial Cemetery.

Pearl
All I remember is when we used to go over to Daisy and Alice’s house when Grandmother Turner was alive and then, I think, a couple of times after she died. I remember the food being amazing.  One time, they had cooked okra and tomatoes and I thought I didn’t like okra and Alice or Daisy said to me: you’ll like our okra. And it was great! Not slimy or anything. I admired that. I also remember they used to play cards with their friends from Anis Furs and Daisy was the life of the party, according to Alice, who always seemed to be right next to Daisy, in the kitchen, in the house. She seemed to be very comfortable and happy. Quiet, though. then, of course, i remember when Daisy died and Alice didn’t tell anybody for a couple of days.

I remember they always gave us “Evening in Paris” cologne in those dark blue bottles. I remember they always had nice handkerchiefs up their sleeve with flowers on them. Dainty little women’s hankies. And sensible shoes with chunky heels. After daisy died, Alice just seemed to fold into herself. I’m sure she missed their own life since there was no card playing and drinking of sherry at Nanny & Poppy’s house. She’s the mystery woman in the family. Makes me kind of sad that we didn’t know her better, but we were kids. They seemed ancient to us and now when I realize how old they were and old we are…. well, don’t get me started down that road!

Dee Dee
GOD bless Alice!  She was a sweet lady, but Alice had mental challenges.  She was diagnosed schizophrenic in a time when it was a blemish on your family if you had someone who was mentally ill.

Nanny and Poppy didn’t want her to be institutionalized so they kept her with them and made sure she took her meds.  She lived with her sister, Aunt Daisy until Daisy died.  That’s when she came to live with Nanny and Poppy. When Alice didn’t take her meds, she could get pretty crazy.  For example,  I remember one day when she was sitting at the dining room table and we were all having Sunday dinner.  She started talking to those people we couldn’t see.  Poppy made her leave the table and go to her room.  I was a little girl but I remember how sternly he spoke to her and told her she had to go to her room if she kept acting up.  Alice went up the Theodore stairs begrudgingly and I remember wondering who she was talking to like that, cuz it was obvious she wasn’t talking to us.  But mostly I remembered the tone of Poppy’s voice and when he spoke sternly like that, you knew to do exactly what he said,…… or else!

Alice was a kind person, but I used to hear her talking to herself on occasions when I was young.  I also remember visiting Aunt Alice and Aunt Daisy at Daisy’s house.  Aunt Daisy worked at that famous bakery in Detroit that went out of business.  I wish I could remember the name of it.  But they made this butter cream and chocolate cake that was the best cake I have ever tasted in my entire life and Aunt Daisy always had that cake at her house.  She and Alice also made the best homemade Eggnog (with alcohol in it for the adults) and plain for us kids.  And she always had a box of Sees Candy on the living room table available for guests.

Alice was always a little frumpy looking, in my eyes, and had a little bit of a mean spirit sometimes.  When she was on her meds she was quiet and kind, but when she had a bad day she could be sarcastic and angry.  She and Poppy seemed to have a love/hate relationship.  I think Poppy took her in because he loved Nanny so much and Nanny wasn’t going to let her sister be put into an asylum.  But Alice used to mumble about Poppy under her breath and I used to hear her fussing to herself when he gave her orders.  She did what she was told, but she didn’t like it.  Nanny kept her clothes and had her helping her in the kitchen most of the time when I was over there.    Nanny used to say that Alice was born when her mother was going through the change in life and that was why she was the way she was. That’s how she explained it to me.   But she wasn’t slow or retarded. Nanny never said it, but I learned later in life that she was schizophrenic.

Mama said when I was a baby Alice used to complain that I was too dark and my nose was too wide.  Once Mary V said she caught her bending over my crib and putting a clothespin on my nose.  Mama asked her what she was doing and she told mama she should keep the clothespin on my nose to make it more slender. I think that was another issue, not having to do with mental disease but more with racist disease.

Alice died in an old age home.  Mom was supposed to take care of her and see about her, but she rarely visited Alice.  Once, when I was in Detroit, I went to see her and she kept calling me Mary V.  After a while I stopped correcting her.  She was obviously getting very senile and I’m sure she couldn’t relate to the fact that little Dee Dee had grown into a woman.

Funny the things we remember about people.   I think she told me that people kept stealing her radio and going through her things at the retirement home.  It was hard to know if that was true or if it was part of her illness.  I did report it to mom.  I never have trusted those homes and I still have not recovered from the fact that my mom died after being placed in one of those facilities.  I think it takes your will to live away.

So that’s what I remember about Aunt Alice.

Binky
Children always see things so differently…I remember the close relationship that Nanny and Aunt Alice had.  They appeared to be the best of friends.  Aunt Alice always had a smile on her face and didn’t let things get to her.  She took directions from Nanny with ease and quickly followed them, for example assisting with prepping vegetables for the meal, cleaning up around the home.  I recall thinking that she was always working and deserved a day off (smile).  She was very gentle with my brother and I and would give us the biggest hugs.  She was soft spoken and a women a few words.  I never knew exactly what she was thinking, because she appeared to keep a lot to herself.  I didn’t know that she and Nanny were sisters until I was an adult and she was gone.  When we would visit at the home, I recalled thinking how cool it was that the two of them got to stay in the same nursing facility – they had each other.  I didn’t like the home at all…Nanny seemed so sad being there, missing Poppy….but Aunt Alice would make me smile, she appeared optimistic and still had her calm demeanor.  I loved Aunt Alice, she exuded a constant display of calm, helpfulness that made you feel welcome and cared for.