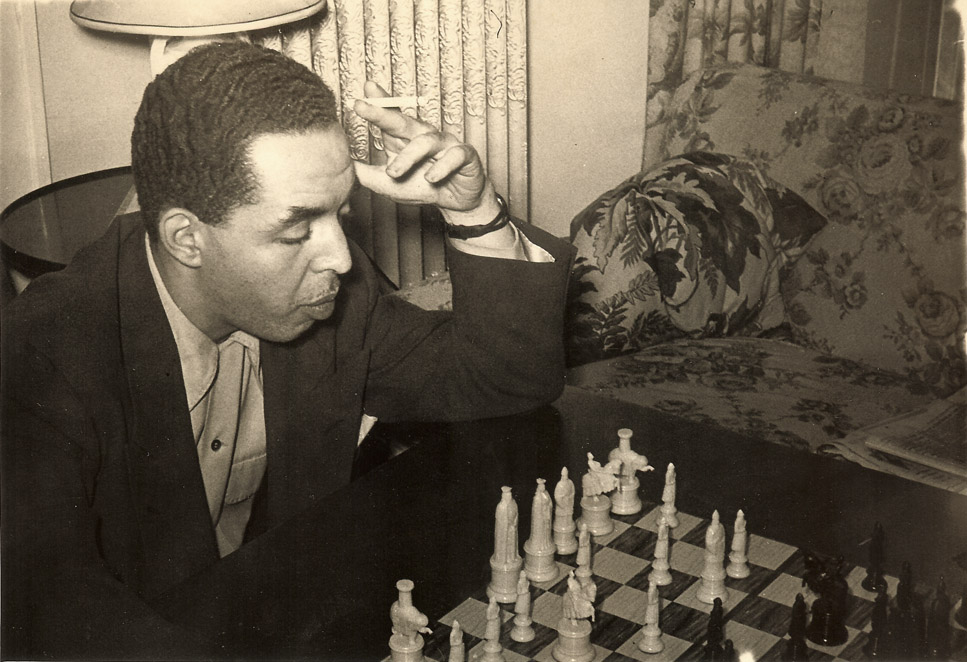 Here is my father, Albert B. Cleage Jr, playing chess at his parents house about 1952.  We lived down the street on Atkinson in the parsonage at the time.  We have played a lot of chess in my family through the years.

I remember my Uncle Henry teaching me to play chess when I was in my teens.  When I first met my husband, we spent hours playing chess on the second floor of the student center in Mackenzie Hall   Below is a bit of a letter I wrote to my sister in 1966 that begins with a game of chess.

I am in bed with the flu. Monday night, I was playing chess with Henry when I developed chills. My teeth were chattering and I had goose pimples. I thought I was gong to die. just my luck to get sick on payday. I got two patterns Friday. I have to get some material now. I want some blue material with little black flowers for the suit.

I spent the weekend with (my cousin).  I got high once on Saturday night. I didn’t like it. It was like everything was floating and everything was real slow. My thinking too, also my voice sounded real far away . This guy was there,  he was talking and I was looking at him and I could hear him, but it was like someone else was talking. Very, very weird!!! I could still think, I knew I was high and what I was doing. It wasn’t my idea of fun and I doubt if I’ll ever do it again.

Sunday morning I went horseback riding. I really liked it. Me and (my cousin) and her friends  went. Riding was really nice, but I was a little scared when the horse first started to run or trot or whatever you call it. I’m just a little sore.

Stokely (Carmichael) is supposed to be here in a few weeks at church. Linda and I finished our 15 page each quota of bruning at work by 12:30 Friday, so we messed around the rest of the day. Both Linda’s and my dress shrunk so now we have mini dresses.

On Friday (my cousin) and I went to the drive-in and saw “Breakfast at Tiffiny’s” and “Who’s Afraid of Virginia Wolf” I liked the first, but, who the hell is Virginia Wolf? Higgins paper came out. Bar’s baby has measles. Everybody at work is singing La Bamba now, due to my great influence.

Unfortunately, I do not think I ever went horseback riding again.  I never really took to getting high. It’s hard to believe I didn’t know who Virginia Wolf was.  Luckily, in one of my early English classes, we had to read her book, Mrs. Dalloway.

The photograph in the header is my grandson Sean playing chess with himself four years ago. He would make a play and then make a play for the other color, often going around to the other side to make the play.