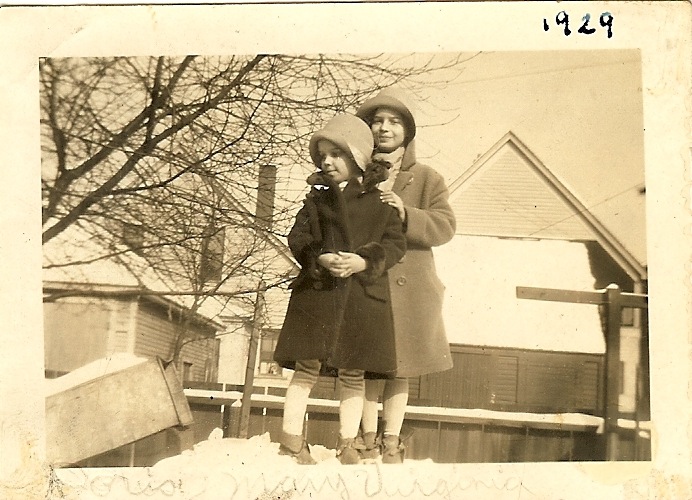 From 1990 until 1996 we put out a family newsletter called the Ruff Draft.  In December of 1990 we solicited Christmas Memories from our readers, who were mostly relatives.  On the days of the Advent Calendar series when I don’t have anything to say I’ve decided to run one of these memories.  Here is the first one from my mother’s older sister.  In the photo is my little mother Doris (1923-1982) and her sister Mary V. (1921-2009).  It was taken in their backyard on Detroit’s east side.

I can remember Poppy waiting till Xmas Eve to go and get our tree.  We (Doris and I) usually went with him…and bringing it home to decorate.  He had a stand that he made himself.  We went up to the attic to haul down boxes of decorations that had been carefully put away.  Some very old.  I can remember one little fat Santa that Mom always put in the window, he had a pipe in his mouth.  Doris and I shared a bedroom which had the door to the attic in it.  When we were at the “believe in Santa Claus stage” we thought that once we went to sleep he would tip down the attic stairs and put our toys, etc, under said tree.  I think I laid awake waiting for the old boy to show up.  Of course I never saw him ’cause I went to sleep, but the stuff was always under the tree.  Mom was always busy in the kitchen getting stuff together for Xmas dinner and the house would be full of wonderful odors.  If Xmas fell on a Sunday, we would go to church. And we used to have lots of snow.  Although we came up during the depression, we always had something to eat and something under the ole tree even if it wasn’t what we asked for.  It was a tradition that Xmas dinner was at our house and Thanksgiving dinner at Grandma Turner’s.  Daddy cooked the ole turkey and made the most delicious stuffing.  He could cook.  Mom learned from him.  She couldn’t boil water when they got married.  Dad taught her cause he had worked in restaurants as a young man.