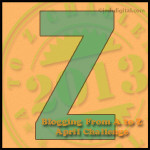 Today is my 26th and final post for the April A-Z Challenge.  I am going to post a bit about my brother-in-law, Zaron Burnett aka Zeke. He was a conscious objector during the War in Vietnam, executive aide to the chairman of the Fulton County Commission and lived in a car while writing his novel, The Carthaginian Honor Society. He is a performance artist and the creator of Club Zebra, a performance installation which he describes as “a floating speakeasy and cabaret and the international center of bohemian negritude”. He is an analytical thinker who was dubbed “the merciless” by my uncle Henry, who said upon meeting zeke: “He’s handsome, in a merciless sort of way.”   He is co-author, with his wife, Pearl Cleage, of the poem “We Speak Your Names,” commissioned by Oprah Winfrey for her Legends Weekend in 2005.  He’s a golfer, a handy man, a protector of those who need protection and he grows the most delicious tomatoes and peppers.  Without further ado I give you, ZEKE!