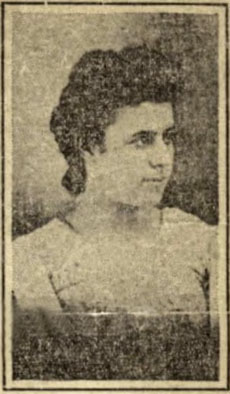 This postcard was written to my grandmother, Pearl Reed, after a visit to two of her sisters in Benton Harbor, MI in 1909.  Pearl was 23 and her niece was about 15.  I wonder why she chose a picture of the Ohio Penitentiary.

Dear Pearl,
I am glad you got home and I worst (sic) you were here know (sic).
Margaret Busby 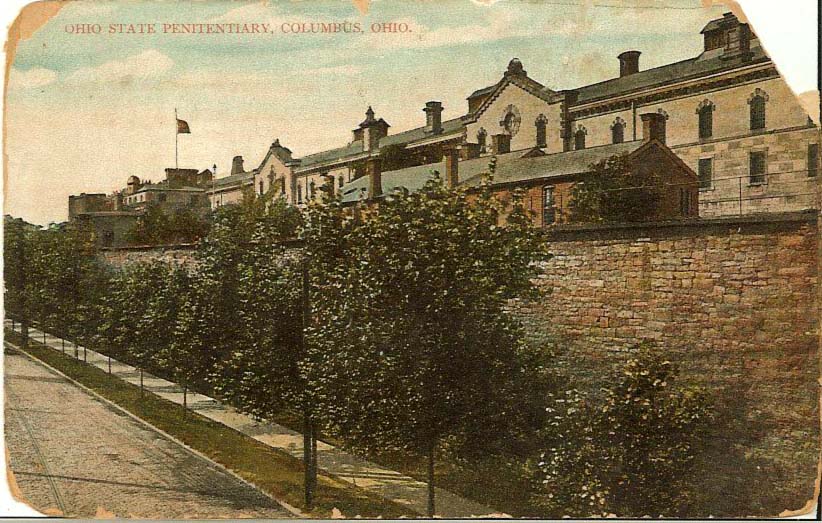 I didn’t have any castles in my photo stash, but this morning I remembered this postcard of the Ohio Penitentiary that my grandmother Pearl’s niece sent to her in 1909.  Surrounded by stone walls, like the castle below, it is my entry for Sepia Saturday 171.  I did post this in 2010 but I don’t think anyone ever saw it, so here it is again.  The Penitentiary was demolished in 1998.  To see photos of then and now – including a photograph that shows a little tower – go to Old Ohio Penitentiary.

Recently I have had great luck finding important family information in online newspapers.  I had not used Ancestry’s newspaper collection for a long time because it was so awkward to use.   Imagine my surprise when I noticed there was a tab right up there with ‘Historical Records’ and ‘Family Trees’ called ‘Stories and Publications’.  I decided to put in a few names and see what I could find.   I found little items of arrests, obituaries, marriages and the article below about how my Grandmother Pearl’s sister, Sarah Reed Busby, got around the lack of sugar during WW 2 by using aspirin to can her berries.  I had just heard about this article from a cousin I met several weeks ago and there it was on my computer!  I took a break in the middle of writing this post to go look again and found a photograph of Robert Chivis, who I had no photo of previously. Robert is the grandson of another sister of my grandmother Pearl.

All Around Our Town
Canning Tip–Use Aspirin!

Did you ever hear of putting up fruit with aspirin?  Mrs. Sarah Busby, 1238 Broadway, a first-rate colored cook of many years’ experience, is doing it and doing it successfully.  She has the sugar rationing on canning licked, for no sugar is needed.

Her method is this: sterilize the glass jars, pack them full of rasberrries, and on the top of each pint drop one aspirin tablet.  Fill the jar with water that has been chilled ice-cold in the refrigerator, and seal quickly.  No cooking is needed.

This method, which Mrs. Busby discovered some time ago as a canning tip in a newspaper, is recommended for strawberries.  She also has used it effectively on both red and black rasberries and is contemplating trying it out on dew berries.

The fruit retains its shape and color without becoming mushy, and while the taste is a little on the tart side its flavor is true to the fruit.

Mrs. Busby’s cooking experience has included 28 years at the Washington resort, where she annually canned around 500 jars of fruit jams, jellies, and pickles every summer.

When pharamcist Jack Brown of the Battlement Drug company was asked about the chemical reaction of aspirin on raspberries he said it was o.k.  It’s the acetylsalicylic (you say it) acid in asprin that acts as a germicide and stops fermentation.

Mrs. Busby insists that the water on the berries must be very, very cold.  She says not to be alarmed when the water on the aspirin “riles it up” for that settles down after sealing.  For a quart of fruit, she uses two aspirin.

Right this way, ladies – no more headaches over the canning season!