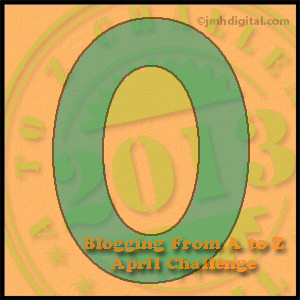 This is my fifteenth post for the April A-Z Challenge.  I began with the intention of writing about my first cousin twice removed, Alma Otilla McCall Howard. I started by going to my Ancestry.com family tree page and pulling up her profile. I noted she was the 5th of 6 children and  that her wedding date was missing.  I opened my Reunion family tree software, hoping it was there. Her marriage date read 1911.   That couldn’t be right. Her husband’s son by his first wife wasn’t born until 1912. There was no date for that marriage either. In fact there wasn’t even a name for Otilla’s husband,  Joseph Howard’s, first wife.

I searched on Ancestry.com. No luck. Tried Family Search, no luck. Then I remembered listening to an interview that my cousin Margaret McCall Ward did with Otilla’s step-son, Dr. Joseph H. Howard, JR, about his amazing drum collection. Maybe there was something there.  Looked for the interview in my itunes list and listened. Unfortunately, he speaks sort of quiet at the beginning when he is telling us his mother’s name and I can’t quite get it. I think he said “Evie” and then changed and spelled it out as “Dama”. Turned that off.

Joseph Jr.’s drum collection sounds interesting. Maybe there is something out there with biographical information. I google Dr. Joseph Howard drums. Several articles come up. I read them and learn the extent of his collection, his wife’s name and his two children’s name. And there are even photographs of him. Nothing about his mother.  Unfortunately, he isn’t even actually related to me and none of this is about Otilla.

I remember another interview that Margaret did with her Uncle Roscoe’s wife, Stella. Stella’s daughter and Joseph Jr. were both there and putting in comments. Maybe the information is there. It only takes a few minutes to find the transcript of the tape on my computer and open it up. Yay! That is what I was remembering. Right at the start of the interview, Margaret starts talking to Joseph and he tells where he was born and how his parents met in Guyana.  His mother lived there and his father was working on a ship. He gives his mother’s name and even spells her last name, Sempert.   I try looking for her using first name of first Evie and then Dama, hoping to find a death record. Nope.

About this time I decide to check in on facebook. I find that I was chosen by Family History Magazine as one of the Top 40 Genealogy Blogs! I was shocked and thrilled. I spent some time going to the Family History Magazine website, congratulating other bloggers I know who were on the list and thanking others for their congratulations.  But, eventually, I had to get back to the post.

Later in the transcript, Joseph talks about how his step mother, Otilla and his father, Joseph Howard met. She was teaching at Mississippi Industrial College in Holly Springs, MS.  Joseph Howard SR was a physician and I don’t know if he was practicing in Holly Springs or if he was in school.  Unfortunately, just as Margaret was getting ready to go deeper, she stopped herself and got back to her task of trying to find out where her grandfather was buried. I wondered what Mississippi Industrial College looked like? I googled and found a few photographs from 1908, a brief history, and a lot of information and photographs of how the beautiful, historic buildings are falling down before our eyes. There doesn’t seem to be any money to save them. An architect who worked on a rehabilitation project years ago writes about how he hated to stop when the funding ran out. Someone warns about walking up the steps of the auditorium and finding themselves looking two stories down to the basement.

I remembered an email exchange with my cousin, Ruth about her memories of Otilla and her large house in Chicago.  I go back and find the emails and re-read them for any interesting information. She talks about her parents bringing her home from the hosptial to that house and the other family members who lived there. It was a multi-unit dwelling. I found a photograph of the house on google maps when I was going to write Otilla and family up for the 1940 census. There was some confusion about whether the house I found was actually the house. I looked up the address on the 1940 census and googled it. I found several real estate descriptions and photographs of the house. I’m satisfied I found the right place.

At that point I started thinking about all the side roads I took and decided to write about that. I still owe Alma Otilla McCall Howard a post.  It shouldn’t be too difficult because there can’t be any other side roads to go down, right?