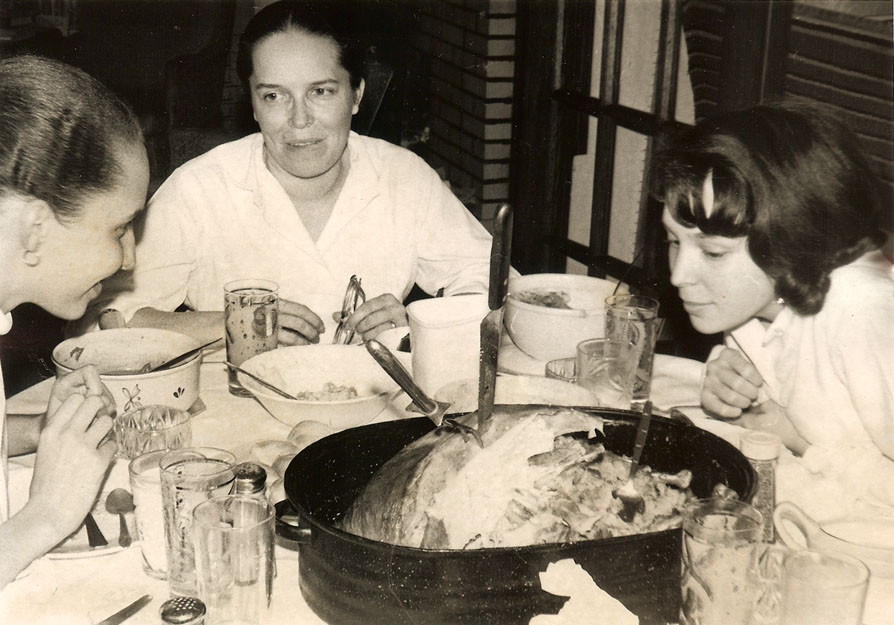 This is the Dec. 2 entry for the GeneaBlogger Advent Calandar.
Did your family or ancestors serve traditional dishes for the holidays? Was there one dish that was unusual?

For Christmas we ate the same thing we ate for Thanksgiving.   When I was younger we always went to my mother’s parents for dinner. My mother’s sister and her three daughters would also be there, usually they rode with us.  My mother’s parents were from Alabama and we had  a pretty traditional southern meal of turkey with corn bread dressing with side dishes.  My grandfather taught my grandmother to cook when they married and he always cooked the turkey himself in an old gas stove in the basement.  It was one of those with the long legs.  With the turkey, we had candied sweet potatoes (no marshmellows!), rice, turnip or collard greens, corn pubbing and green beans.  My grandmother made her salad, which was great but I would never make.  She cut up lettuce and onions very tiny and added lots of mayonaise.  There was a relish plate with carrot and celery sticks, olives and tomatoes and always fresh, hot biscuits.

They ate an early dinner and when we left there we would go to my paternal grandparents and have desert.  There would be sweet potato or pumpkin pie and mince meat pie and fruitcake.  The pies were homemade.  The fruitcake was store bought.  These were served with store bought eggnog and lots of political discussion.  My other cousins would be there and we had another bunch of gifts to open.

For several years we ate dinner at home and we had the same things except no greens and no Nanny’s salad or biscuits.   We also had macaroni and cheese and brown and serve rolls.  My mother was a teacher and we did not have lots of Christmas baking.  Perhaps a pie or two. I almost forgot the box of chocolate cherries and the large box of Sanders Miniature Chocolates.  Wish I had a box coming this Christmas!  Above is a shot of me, my mother and my sister posing with the remains of a turkey. Probably taken around 1962.  I remember one traumatic Christmas when the oven was broken and my mother had to cook the turkey in a stand alone oven.  Somehow a wire in the top touched the turkey while it was baking and left a greenish mark.  My mother said we might all be poisoned and threw the whole turkey out!  We “borrowed” some turkey from my grandmother and dinner went on but no leftover turkey for snacks.

7 thoughts on “We ate more turkey”